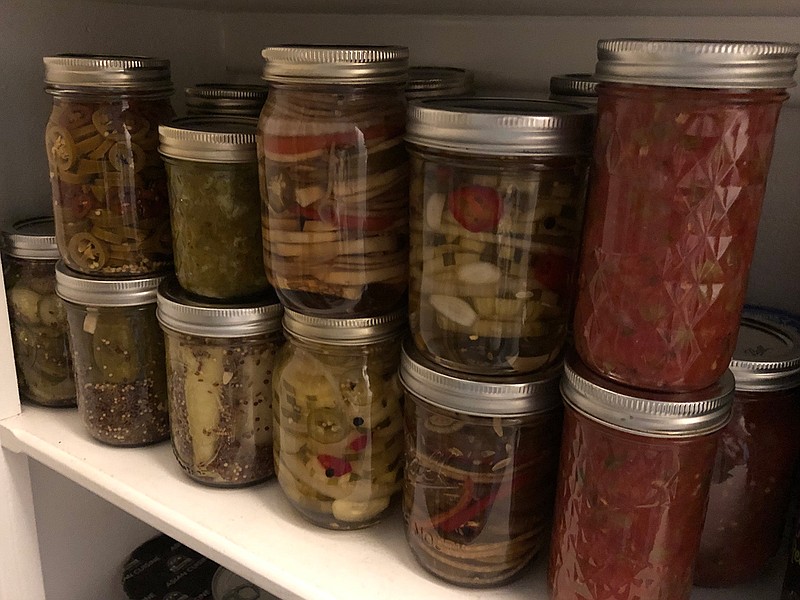 Pantry is filled with canned goods from the summer garden.

The great thing about growing a lot of your own food is the ability to walk out the back door and pick it.

It doesn't get much fresher than that.

If there's a downside to growing a garden (we had seven garden areas this year), it's that it seems that most of the produce comes off the vine about the same time.

So, you have a few choices.

4) Take bags of produce to church for distribution.

5) Spend a week listening to the classic country radio station while you can everything in Mason jars.

My wife typically does a mixture of all of the above, but mostly, it's No. 5.

Let's start with the cucumbers. You might be surprised to know that they're a member of the gourd family. There are a number of varieties, but most folks in the south prefer the pickling kind. And that's what my wife does with most of the ones that grow in our garden.

They're pickled and canned. Sometimes she makes dill, other times spicy and other times sweet. You have to get creative when you're trying to can cucumbers as fast as they produce.

Cucumbers are the one garden vegetable besides okra and asparagus that can grow the length of a 1960 model Buick during the time you've gone in the house to get another Gatorade.

And heaven help you if you miss a cucumber that's hiding behind a fence full of leaves. They can turn into a weapon in just a couple of days. Major League Baseball often uses them when they're running low on Louisville Sluggers.

Speaking of okra, it can also be canned. Pickled is the way I prefer it. It's about the only way other than battered and fried that I prefer it. I cannot stand stewed tomatoes and okra or boiled okra. Whoever came up with either of those ideas deserves a pummeling with a Buick-sized cucumber.

But a jar of pickled okra, opened up in the winter and enjoyed with a meal, is a reminder of the hard work that was done just a few months - or even a couple of years - earlier to be enjoyed later.

I mentioned asparagus and how fast it grows, and I've written about it in a previous column. It's an odd one, asparagus. I know you can put it in jars and can it because I've seen it that way on the shelf at the Piggly Wiggly. But we've never tried to can it. I'm not sure why.

It may be because it produces for such a short period that we eat it with every meal for a few weeks before it stops producing for the season, so we just don't get tired of it.

Asparagus takes about two years to establish a bed before it grows. But once it starts growing, each spear can grow up to 10 inches a day. You read that right. About 10 inches a day. Our asparagus bed is next to the driveway, so I can leave in the morning and come home in the evening, step out of the car, take out my knife and harvest that evening's servings before going in the house.

Green vegetables aren't the only thing you can put in jars and save for later. One of the favorites at our home (and with friends my wife gives jars to) is sweets.

My bride was able to take a clipping of her father's thornless blackberry bush and transplant it through two different moves. She took the cutting many years ago and has managed to keep it going all these years. Today, the blackberry bush dominates the fence of one of her gardens. It produces gallons of berries each summer.

Between the okra, pickles, blackberries and other garden produce, the canning process can be as arduous as the planting, nurturing and harvesting.

There may be no better reward than walking out the back door and picking that night's supper, but I think opening a jar of blackberry jam on a cold Christmas morning and slathering it on a hot buttered biscuit comes pretty close.

My wife has spent the last several days making blackberry jams, which she says she's going to share with others. I plan to stash a few jars behind the giant cucumbers I've saved. No one ever seems to see those.