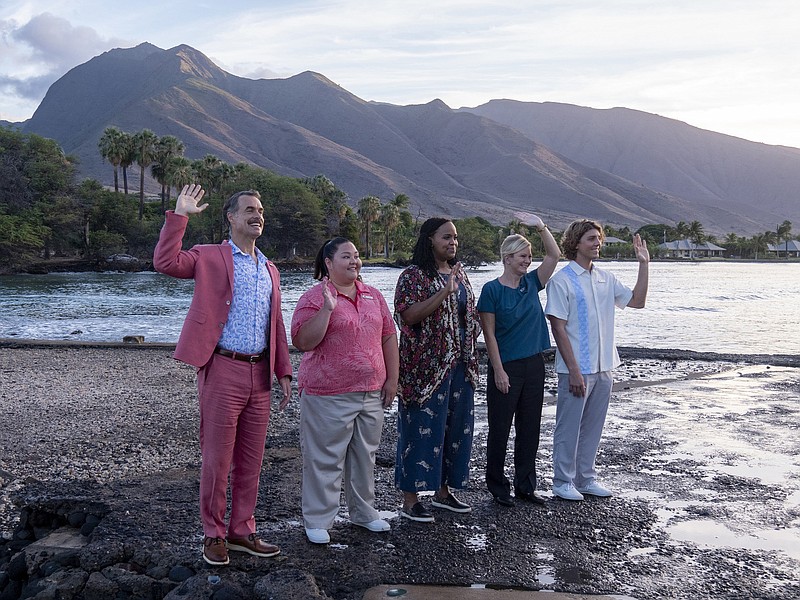 The hotel staff in &quot;The White Lotus&quot; wave to guests in the first episode, before everything goes horribly awry. MUST CREDIT: Mario Perez/HBO

Movies and TV offer an escape from our normal lives, but sometimes they can inspire an actual escape. Media has the power to create in-demand travel destinations. Just look at Croatia and its "Game of Thrones" tourism surge, or New Zealand's "Lord of the Rings" fame.

As people begin plotting their trips for 2022, we put together some ideas based on what people are watching in 2021.

Those dreaming of traveling, eating and drinking like Stanley Tucci are encouraged to book a flight to Italy (obviously).

Where you go can be based on your favorite episode, such as Florence to see the "wine windows" built between the wrath of the Black Death in the 1300s and the Italian Plague in the 1600s; or Modena to taste the world's greatest balsamic vinegar.

For a trip with the best chance for a direct flight, head to Rome to hunt for its four pastas: amatriciana, cacio e pepe, carbonara and gricia.

Space travel may only be viable for the super rich, but "Dune" fans can pretend to have an interstellar adventure by visiting two of the movie's epic filming locations.

For the much greener Caladan experience, plan a trip to Norway to see the Nordfjord coast, Kinn Island (you can take a boat from Floro to get there) and Myresanden beach on the Stadlandet Peninsula. You can also go with Norway Adventures on an eight-day filming locations tour.

To reenact spice-tripping scenes from Arrakis, visit the place where they were filmed in Wadi Rum, a protected desert in Jordan. Also known as the Valley of the Moon, this destination has also been used to film major movies such as "Star Wars," "Lawrence of Arabia" and "The Martian." Immerse yourself in the desert by staying in one of the Bedouin-run camps that run from luxurious options to still-spectacular traditional ones.

The South Korean survival drama "Squid Game" became Netflix's most-watched series of all time. As a result, online searches for flights to its filming locations are surging, although it's still not easy to visit South Korea because of the pandemic.

Once South Korea tourism does reopen, plan your trip to Jeju Island (a popular destination for hiking), Seoul and Daejeon (the country's fifth-largest metropolis).

Fans of the third installment of FX's "American Crime Story" can book a vacation to our nation's capital, although it was filmed on sets in Los Angeles. To follow the story line, head to the Watergate Hotel in Foggy Bottom where Monica Lewinsky, played by Beanie Feldstein, lived; or cross the Potomac River and visit the Ritz-Carlton in Pentagon City, where you probably won't be questioned by the FBI.

Part of the appeal of Netflix's "Emily in Paris" is the show's backdrop, particularly during its debut in October 2020 when Americans couldn't travel to the titular city.

With Season 2 coming out this December and France being open for tourism, the series provides inspiration for a trip perfect for influencers-in-training. That means planning stops to Instagram-worthy places featured in the show, such as Café de Flore (one of the oldest cafes in the city), the Palais Garnier opera house, the Pont Alexandre III bridge and Hotel Plaza Athénée.

The on-screen adventures of Dr. Lily Houghton and skipper Frank Wolff are based on one of Disney's most famous rides. Fans can travel to Disneyland in Southern California and board the original ride, which debuted in 1955, or plan a vacation to Orlando's Disney World. Recently, Disney announced updates to the ride, saying it will remove "negative depictions of 'natives.'" Both parks will also look a little different during the pandemic; expect new rides and coronavirus protocols.

Lucky for fans of "The White Lotus," the property featured on the show exists in real life. For about $1,500 a night, you, too, can stay at the Four Seasons Resort Maui at Wailea, as long as you follow Hawaii's coronavirus travel restrictions. Just pray your trip isn't as disastrous as the hotel guests' on the show.

If the Four Seasons is a little too pricey for you, check out the locally owned properties on the island, such as the Old Wailuku Inn at Ulupono or Iao Valley Inn, located on 37 acres adjacent Iao Valley State Park.

Fans of the hit (bleak) show "Mare of Easttown" are causing a scene at filming locations in Wallingford, Pa., to the point that Nether Providence Township police are telling the public it is "not cool" to trespass.

Instead of freaking out locals, stay in one of the decidedly-not-bleak bed-and-breakfasts in the area, like the Gothic Revival chalet-style Gifford-Risley House or the Inn at Grace Winery.

"Luca" may be a Disney and Pixar animated movie about a couple of Italian kids who can turn into sea monsters, but you can still plan a trip to the fictional movie's real-life location.

The city where the coming-of-age tale takes place is based on the Italian coastal destination Cinque Terre. It is worthy of a visit even if you're not a rambunctious little boy trying to find your place in the world. Note that pre-pandemic, the destination was struggling with overtourism, so a trip outside of peak summer travel would help you avoid crowds and respect locals. Before you go, get to know Italy's travel restrictions for foreign visitors.

Additionally, if you choose to hike between the picturesque towns, do not wear flip flops on the trail; you can face fines or be banned. Improper footwear has resulted in numerous accidents that required mountain rescue teams.

Wes Anderson's latest movie is described as a 20th-century "love letter to journalists" set in a charming, fictional French city. The director found the charm and preserved architecture for the project in Angoulême, which has a population of about 42,000.

Nicknamed the "balcony of the southwest," Angoulême is an hour away by train from Bordeaux. The city is known for its classic car race, the Circuit des Remparts, which takes place annually on the third weekend of September.

AppleTV's "Ted Lasso" won people's hearts over for being nice. No violence, no depressing plotlines - just a pleasant story about an American football coach in London trying to do his best.

Print Headline: 10 trips inspired by the most popular shows and movies in 2021