Taxi! Take me to the airport -- by air, please 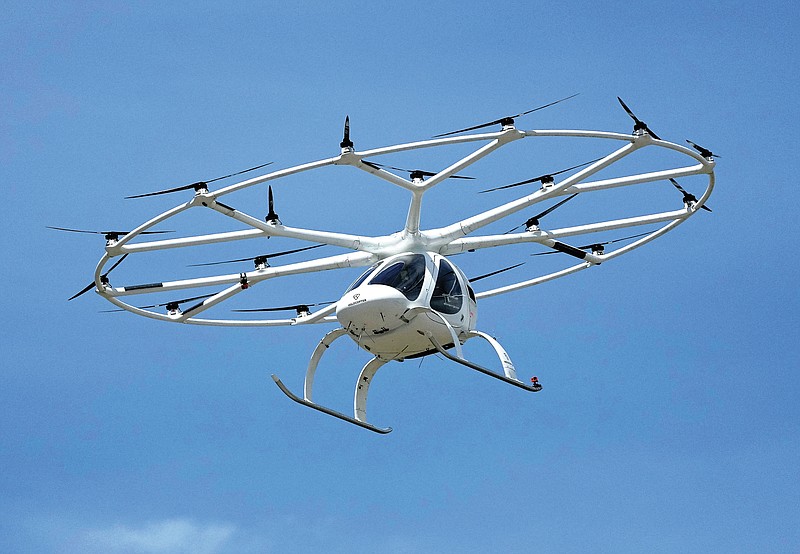 A urban air taxi prototype of a 2 seats, 18 rotors electric aircraft by German based company Volocopter makes a test flight during an event at the Air and Space Museum in Le Bourget, east of Paris, Monday, June 21, 2020. (AP Photo/Michel Euler)

It is late afternoon in Manhattan and you have a flight to catch at Kennedy International Airport. Instead of sitting in rush-hour traffic for two hours, you take a short ride to a nearby parking garage where you board an electric aircraft that takes off vertically from the roof and deposits you at Kennedy 20 minutes later for roughly the same cost as a fancy ride-share. You make your flight in time.

While this scenario might sound far-fetched, several companies say they are on the verge of being able to offer safe, cheap, clean electric aircraft that can help passengers travel distances between two and 150 miles without the need for a conventional runway. Public and private experts believe the technology could grow into a massive market that helps ease congestion and changes the way people travel in major metropolitan areas.

While urban air travel is currently out of reach for most customers (think: Uber Copter), improvements in battery technology have driven down the cost of developing electric-powered aircraft that are viable as urban passenger transportation. These companies are betting they can bring electric urban and regional air travel to the masses, and have developed new aircraft to compete for a slice of this nascent market within the next few years.

"We want to create something that is available to a lot of people, that can do the job of a high-speed train without requiring the infrastructure," said Daniel Wiegand, chief executive and founder of Lilium, based in Germany. "We won't be at the ticket price of a high-speed train in Germany on our first day, but if we don't get there within 15 years I would consider our mission failed."

Manufacturers say these electric aircraft have numerous advantages over conventional aircraft and especially helicopters, which are expensive to maintain and fly, noisy, and come with safety risks, as seen in the crash that killed Kobe Bryant and eight other passengers.

The new electric aircraft use one-fifth the energy of conventional helicopters. Unlike traditional fixed-wing aircraft, they won't require runways to take off and land. Unlike helicopters, they will be largely inaudible from the ground and have multiple rotors and backup systems, making them much safer.

Adam Goldstein, the co-chief executive of Archer Aviation, said his company hopes to offer fares in the range of $3 to $4 per mile traveled. That would make the trip from Manhattan to Kennedy, typically 17 miles, between $50 and $80. Several experts predicted the price of regional flights would be around the same cost as the luxury car service Uber Black.

"The biggest cost is the batteries," said Goldstein, which are "expensive, but get cheaper every day." (He declined to be more specific about battery sourcing and cost.)

Several companies, including Lilium and Archer, have stood out in a crowded field for their technology and ability to raise capital. None are content to simply manufacture vehicles; all seek to both develop aircraft and provide an end-to-end service, combining the traditional roles of aircraft manufacturers like Boeing and airlines like Delta.

Several experts credited Tesla and other auto companies getting into the electric market for driving down the cost of batteries. Traditional manufacturers like Hyundai are also ramping up their investment in electric aircraft, with hopes of entering an aircraft into service in 2028.

The more established players in this space, like Joby Aviation and Volocopter, are promising to have aircraft in service by 2024, an ambitious goal that will depend largely on gaining regulatory approval.

The largest area of investment is into electric vehicles that takeoff and land vertically, like helicopters or Harrier jets. Known as electric vertical takeoff and landing or eVTOLs, these aircraft can usually seat between two and 10 passengers and can travel up to 200 miles, making them ideally suited for traversing a metropolitan area or connecting two cities.

Wiegand of Lilium had a light-bulb moment in 2014 when he watched a video of a military aircraft that took off vertically and realized that an electric version could solve all the traditional problems with using aircraft in dense urban areas: eliminating noise and air pollution, as well as the need for runways. Still a student at Technical University of Munich at the time, Wiegand put together a team and began developing the engine that today powers his company's seven-seat electric jet.

He believes his company's jet technology scales better than designs based on propellers, and argued that the additional capacity would helped reduce costs to a level affordable by middle-class consumers.

Taking a different approach is Volocopter, founded in 2011 and based in Munich; it currently has two vehicles in advanced development including a "multicopter," a copter with 18 rotor blades, called the VoloCity. The two-seat aircraft has a 22-mile range, which Florian Reuter, the chief executive, said makes it easier to certify than some longer-range electric aircraft, and ideally suited for urban travel, where the vast majority of trips are 10 to 20 miles. Volocopter is also developing a four-seat aircraft with a 100-mile range aimed more at regional travel.

Volocopter is pursuing regulatory approval with the European Union Aviation Safety Agency and hopes to have its aircraft in operation by 2024.

Joby, based in Santa Cruz, California, is pursuing a similar goal using yet another approach, having flown over 1,000 test flights on its fully electric aircraft, which seats four passengers plus the pilot and has a range of 150 miles on a single charge. The company made headlines last December when the ride-sharing giant Uber offloaded Elevate, their urban air travel ride-sharing product, to Joby and invested an additional $75 million into the company, signaling that the two services would be seamlessly linked.

The FAA declined multiple requests for an interview, but said it is reviewing electric aircraft on a case-by-case basis.

Mayor Francis Suarez of Miami said his city is embracing eVTOLs as a cost-effective, environmentally friendly alternative to legacy modes of transportation like buses and light rail, which are costly to build and rely on older technology. He said the city is looking at parking garages, rooftops and other potential takeoff and landing locations.

"We feel that one of the flaws in transportation planning and funding has been retreading yesterday's ideas," he said in an interview. "The sky obviously has multiple dimensions and gives you the ability to be creative."

Suarez added that he has pushed Secretary of Transportation Pete Buttigieg to embrace urban air mobility rather than focusing on older modes of transport.

Sam Morrissey, the executive director of Urban Movement Labs, said the aircraft initially will likely be confined to existing commercial airports and flight paths until officials are able to determine how the new locations for takeoffs and landings can be added without disrupting other modes of transport. (Joby and Archer have both begun certification under rules for existing fixed-wing aircraft.)

"Our challenge is if they are to arrive, can we have everything in place so it's not something only rich people can use," Morrissey said.

This article originally appeared in The New York Times.

Print Headline: Taxi! Take me to the airport -- by air, please