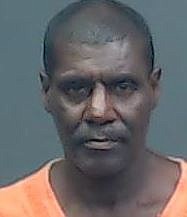 NEW BOSTON, Texas -- A man who was naked when he used an axe to break into a neighbor's home and terrorize them on a Sunday morning last year was sentenced Wednesday to eight years in prison by a Bowie County jury.

William Charles Gatewood, 59, testified under questioning by Assistant Public Defender Bart Craytor that he accidentally smoked a synthetic marijuana cigarette the morning of Nov. 22, 2020, which had been left in an ashtray by a friend. Gatewood's claim that his violent behavior was not his fault was rejected by a jury that found him guilty of burglary of a habitation with the intent to commit another felony.

Gatewood's across-the-street neighbor on Austin Street, Martha Williams, testified that she watched from her kitchen window as Gatewood used an axe to defeat the lock on her gate and smash holes in the cover of her hot tub before using the tool to break her side door and enter her home.

"He turned around and there he was, in all his naked glory," Williams testified. "I was scared. Really scared."

Williams' adult grandson, Victor Owens, testified under questioning by Assistant District Attorney Katie Carter that he got his grandmother and minor cousin out of the house as he attempted to calm Gatewood.

Gatewood went out the front door of Williams' home and began chasing Owens with the axe, striking him with the dull side of the blade. Gatewood stopped the attack when his landlord, who lived down the street, told him to stop because he feared he would kill Owens.

By the time members of the Texarkana Texas Police Department arrived, Gatewood was sitting in an upholstered arm chair on his cluttered front porch with an orange sweatshirt draped across his lap. Gatewood's shouts and demands to officers were captured on body camera and played for the jury.

Gatewood confirms the axe sitting near him on the porch is the one he used to wreak havoc across the road and tells officers he should have killed Owens.

On the stand Wednesday, Gatewood said he was embarrassed by the videos played at trial and denied that his conduct in the neighborhood has been routinely menacing. Under cross-examination by Carter, Gatewood was asked about a June 2019 call to police by a different neighbor complaining that Gatewood was at her door with a large knife. Carter said Gatewood was arrested then for public intoxication.

Carter questioned Gatewood about an arrest in May which started with Gatewood in his mother's yard on Austin Street swinging a water ski at 3:30 a.m. Gatewood was free on bond in the current case at the time and was arrested for disorderly conduct and possession of methamphetamine.

Gatewood claimed people were after him and he was only looking for help.

Gatewood has only one prior felony conviction though his misdemeanor arrest record is lengthy. Under questioning from Craytor, Gatewood claimed he has been diagnosed with schizophrenia.

Carter pointed out in her closing arguments that there was no testimony that Gatewood was "psychotic, insane or crazy."

"What we do know is that Mr. Gatewood scared the crap out of Ms. Williams and her grandsons while they were at home having coffee on a Sunday morning," Carter said. "We do know that he wreaked havoc at his house, his mother's house and the neighbor's house."

Print Headline: Texarkana man who used an axe to break into neighbor's home gets eight years for burglary