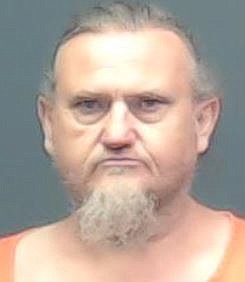 TEXARKANA, Texas -- A man accused of shooting two men in October behind a residence on Horseshoe Loop Road in Bowie County was indicted Thursday for two counts of murder and possession of methamphetamine.

Thomas Wayne Lawson Sr., 51, of Atlanta, Texas, was allegedly visiting at the residence described as a camper in the 200 block of Horseshoe Loop on the afternoon of Oct. 24, according to a probable cause affidavit. Bowie County Sheriff's Office deputies as well as officers from Texarkana Texas Police Department, Wake Village Police Department and Nash Police Departments responded to a call at about 5:15 p.m.

When they arrived, deputies and officers began searching for both the suspect and the victims. Approximately 30 to 40 yards behind the camper they discovered a man lying on the ground who appeared to be bleeding from his head. Gordon Walls, 60, died of his wound within days of the shooting.

Approximately 20 to 30 yards away from where officers located Walls they found Roger Cowley, 63, propped up against a pine tree. He was pronounced dead at the scene.

Deputies went back to the camper and reportedly found Lawson sitting in a chair facing the front door with a black rifle sitting between his legs. Lawson obeyed commands from officers and was taken into custody.

The gun Lawson was allegedly holding at the time of his arrest is not the one he allegedly used to shoot Walls and Cowley. A witness who lives at the location told investigators that he, Walls, Cowley and Lawson had walked down to the "high lines" behind his residence to look for hogs.

After seeing Walls and Cowley had been shot, the witness "told Thomas to give him the gun and Thomas handed it over to him."

The witness spotted a friend sitting in her car in front of his camper, got in the car with her and instructed her to drive away as he called 911.

Lawson was questioned by a BCSO investigator.

"Lawson was very confused and reluctant to talk about the shooting," the affidavit states.

Lawson allegedly claimed that he overheard Walls and Cowley talking about how they had harmed Lawson's children.

During the booking process, jail staff allegedly found a rolled $1 dollar bill containing a white powder that allegedly tested positive for the presence of methamphetamine.

If convicted of possessing less than a gram of meth, Lawson faces six months to two years in a state jail. If found guilty of murder, Lawson faces five to 99 years or life on each count.

Lawson is currently being held in the Bowie County jail. Bail is set at $5,000 on the drug charge and at $1 million on each of the two counts of murder.

(Horseshoe Loop Road is southwest of Texarkana and east of the northern part of Wright Patman Lake. It generally runs parallel to U.S. Highway 59, connecting to it on both ends.)