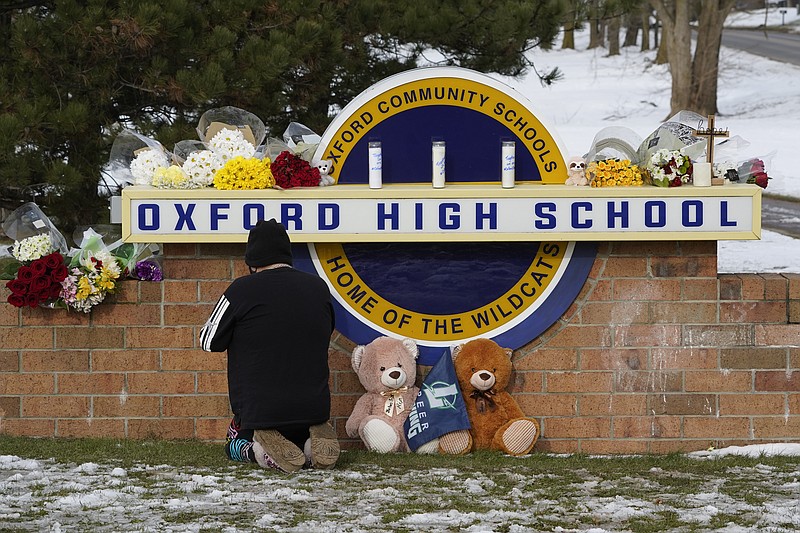 A well wisher kneels to pray at a memorial on the sign of Oxford High School in Oxford, Mich., Wednesday, Dec. 1, 2021. A 15-year-old sophomore opened fire at the school, killing several students and wounding multiple other people, including a teacher. (AP Photo/Paul Sancya)

OXFORD TOWNSHIP, Mich. -- A prosecutor on Thursday repeated her criticism of the parents of a boy who is accused of killing four students at a Michigan school, saying their actions went "far beyond negligence" and that a charging decision would come by Friday.

"The parents were the only individuals in the position to know the access to weapons," Oakland County prosecutor Karen McDonald said. The gun "seems to have been just freely available to that individual."

Ethan Crumbley, 15, has been charged as an adult with two dozen crimes, including murder, attempted murder and terrorism, for a shooting Tuesday at Oxford High School in Oakland County, roughly 30 miles north of Detroit.

Four students were killed and seven more people were injured. Three were in hospitals in stable condition.

The semi-automatic gun was purchased legally by Crumbley's father last week, according to investigators.

Parents in the U.S. are rarely charged in school shootings involving their children, even as most minors get guns from a parent or relative's house, according to experts.

There's no Michigan law that requires gun owners keep weapons locked away from children. McDonald, however, suggested there's more to build a case on.

"All I can say at this point is those actions on mom and dad's behalf go far beyond negligence," she told WJR-AM. "We obviously are prosecuting the shooter to the fullest extent. ... There are other individuals who should be held accountable."

Later at a news conference, McDonald said she hoped to have an announcement "in the next 24 hours." She had firmly signaled that Crumbley's parents were under scrutiny when she filed charges against their son Wednesday.

Jennifer and James Crumbley did not return a message left by The Associated Press.

Sheriff Mike Bouchard disclosed Wednesday that the parents met with school officials about their son's classroom behavior, just a few hours before the shooting.

McDonald said information about what had troubled the school "will most likely come to light soon."

Crumbley stayed in school Tuesday and later emerged from a bathroom with a gun, firing at students in the hallway, police said.

"I just can't get to a space right now to blame anybody who worked at that school. They were terrorized," McDonald said.

"Should there have been different decisions made?" she said when asked about keeping the teen in school. "Probably they will come to that conclusion. ... Again, I have not seen anything that would make me think that there's criminal culpability. It's a terrible, terrible tragedy."

The Oxford school district hasn't commented on the meeting with Crumbley's parents before the shooting.

William Swor, a defense lawyer who is not involved in the case, said charging the parents would require a "very fact-intensive investigation."

Just over half of U.S. states have child access prevention laws related to guns, but they vary widely. Gun control advocates say the laws are often not enforced and the penalties are weak.

"Our laws haven't really adapted to the reality of school shootings and the closest we have are these child access prevention laws," said Kris Brown, president of the Brady gun control advocacy group.

In 2000, a Flint-area man pleaded no contest to involuntary manslaughter and was sentenced to two years in prison. A 6-year-old boy who was living with him had found a gun in a shoebox and killed a classmate at school.

In 2020, the mother of an Indiana teen was placed on probation for failing to remove guns from her home after her mentally ill son threatened to kill students. He fired shots inside his school in 2018. No one was injured but the boy killed himself.

In Texas, the parents of a student who was accused of killing 10 people at a school in 2018 have been sued over his access to guns.

Meanwhile, dozens of schools in southeastern Michigan canceled classes Thursday due to concerns about threatening messages on social media following the Oxford shooting. Some schools stayed open with a larger police presence.

Bouchard said no threats in Oakland County were found to be credible. Just to the north in Genesee County, a Flint teenager was charged with making a false threat when she recorded a video while riding a school bus and posted it online.

"If you're making threats, we're going to find you," Bouchard said. "It is ridiculous you're inflaming the fears of parents, teachers in the community in the midst of a real tragedy." 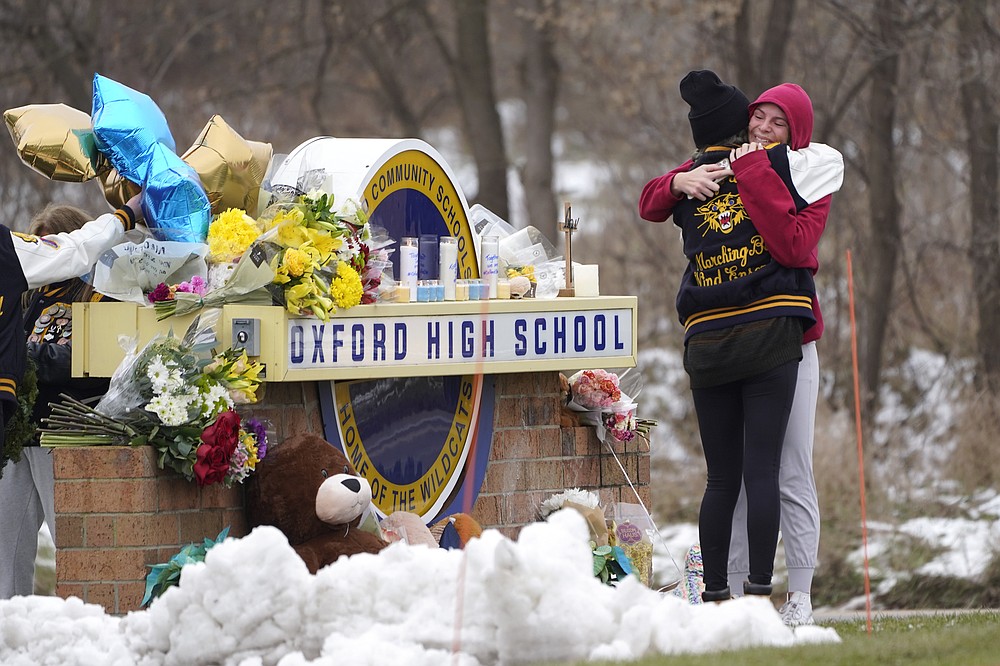 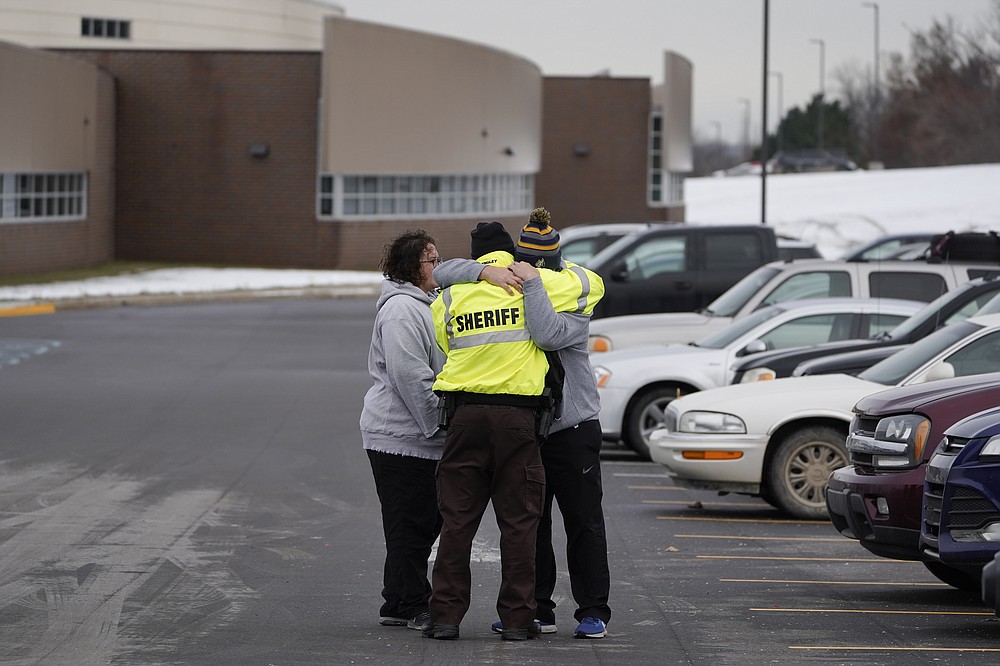 An Oakland County Sheriff&#x27;s deputy hugs family members of a student in the parking lot of Oxford High School in Oxford, Mich., Wednesday, Dec. 1, 2021. A 15-year-old sophomore opened fire at the school, killing several students and wounding multiple other people, including a teacher. (AP Photo/Paul Sancya) 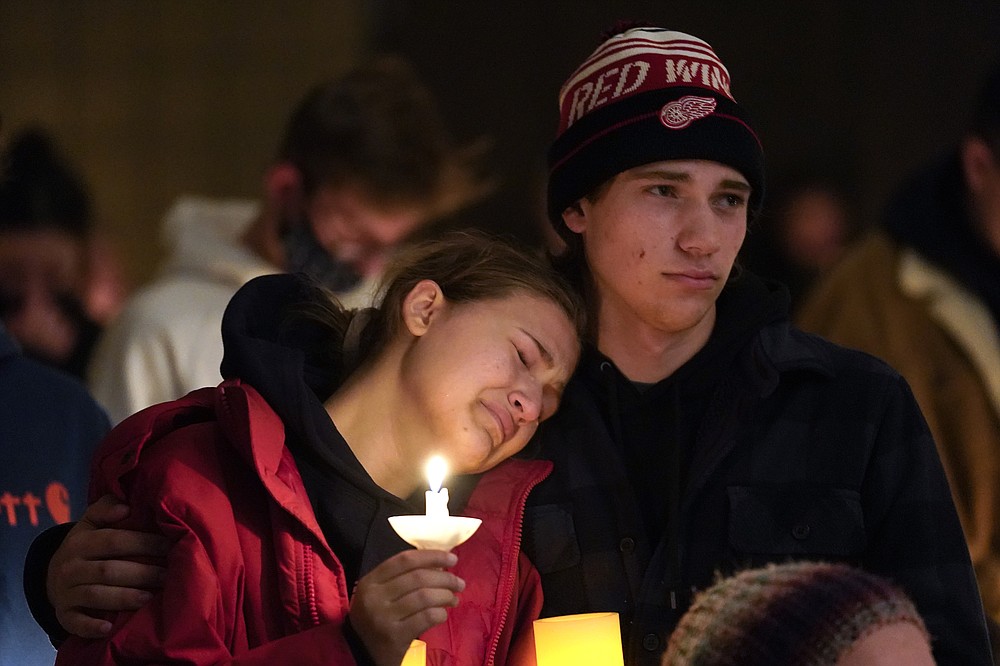 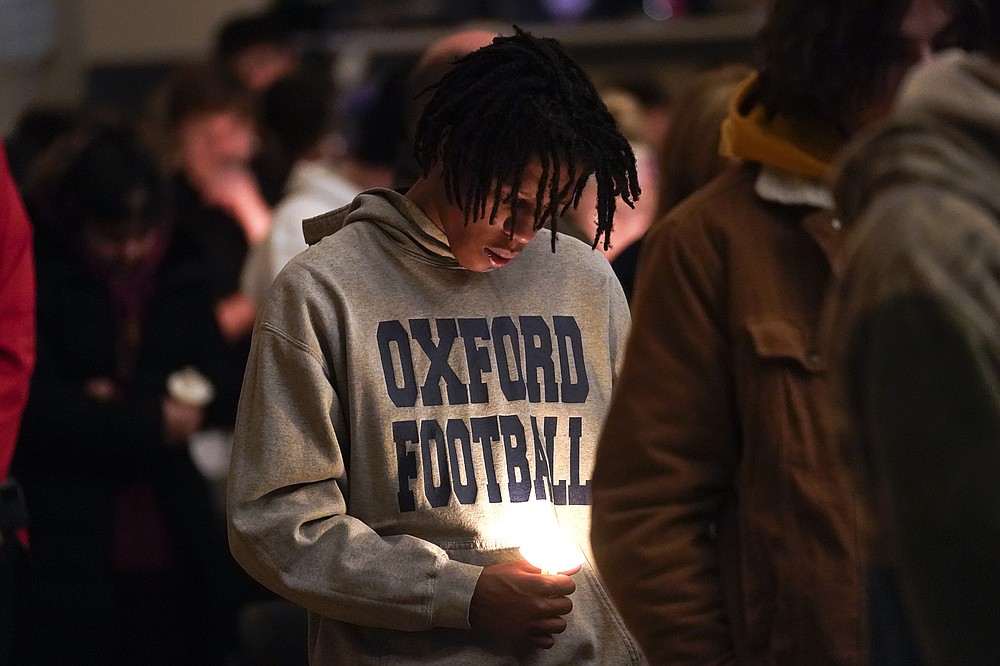 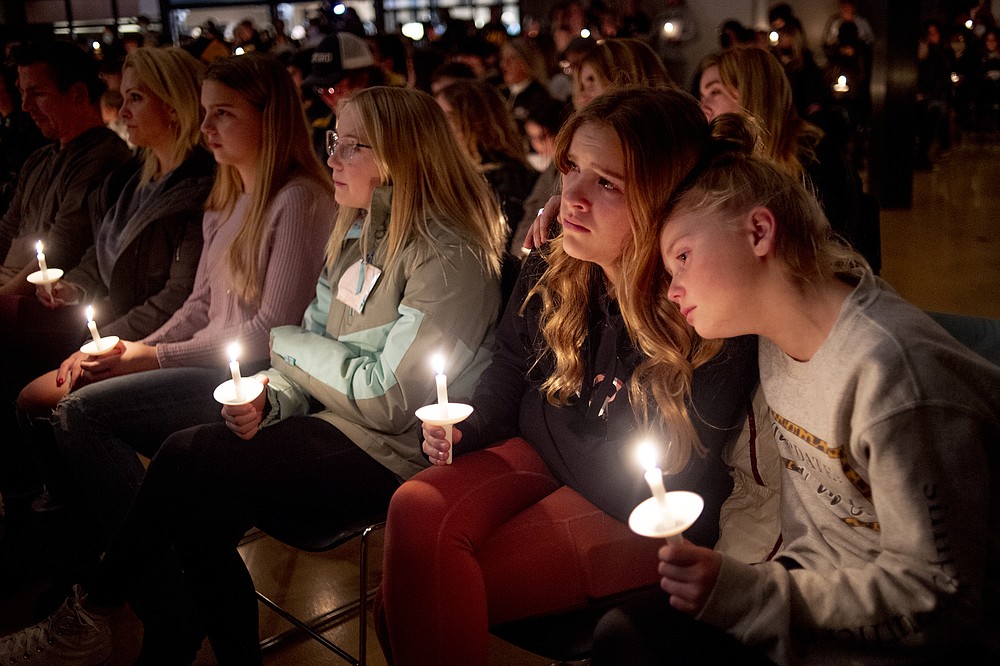 Emerson Miller, right, leans on her friend Joselyn&#x27;s shoulder as they listen to Jessi Holt, pastor at LakePoint Community Church, during a prayer vigil at the church after the Oxford High School school shooting, Tuesday, Nov. 30, 2021, in Oxford, Mich. (Jake May/The Flint Journal via AP) 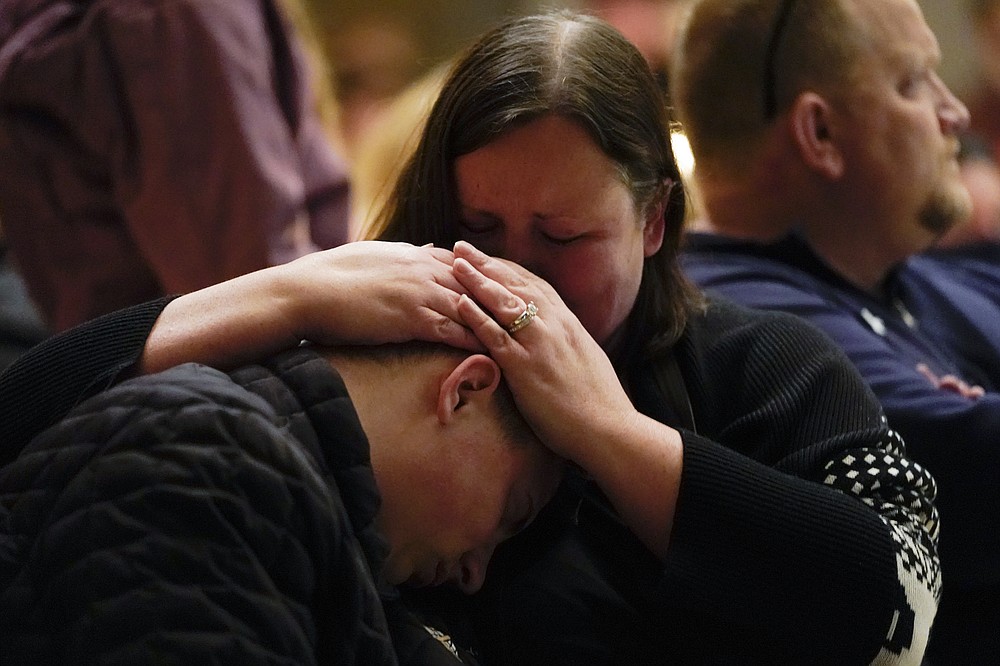 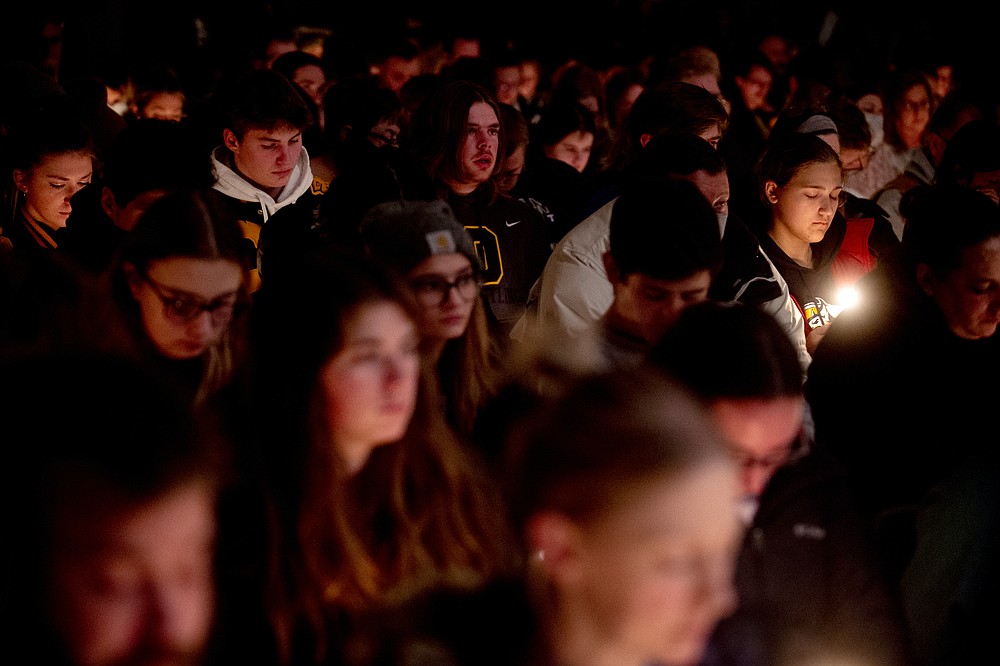 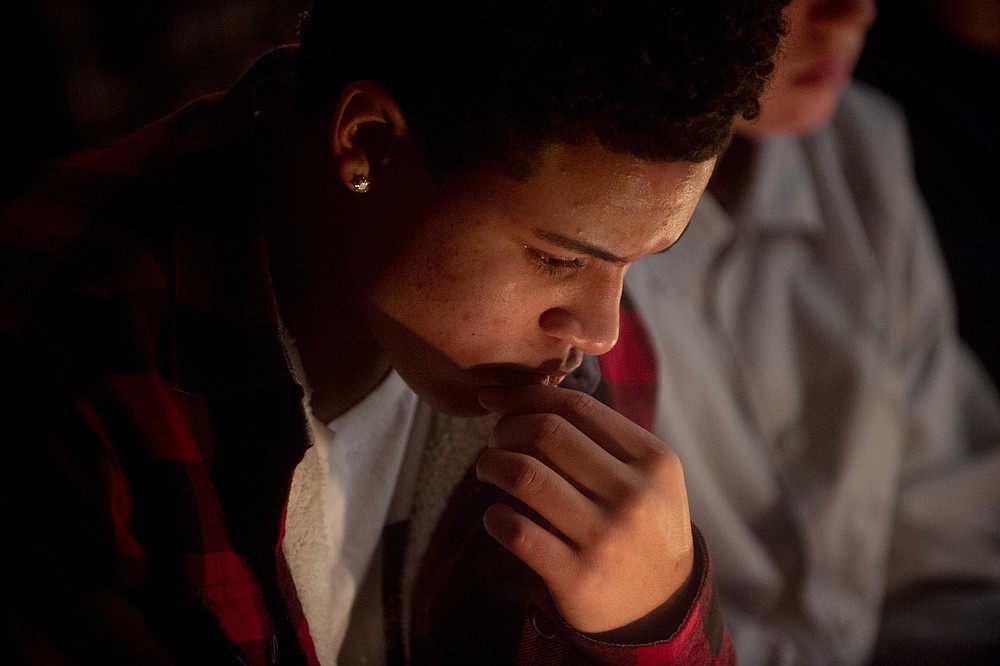 Parents walk away with their kids from the Meijer&#x27;s parking lot, where many students gathered following an active shooter situation at Oxford High School, Tuesday, Nov. 30, 2021, in Oxford, Mich. Police took a suspected shooter into custody and there were multiple victims, the Oakland County Sheriff&#x27;s office said. (Eric Seals/Detroit Free Press via AP)