Night falls at the the Capitol in Washington, Thursday, Dec. 2, 2021, with the deadline to fund the government approaching. Republicans in the Senate are poised to stall a must-pass funding bill as they force a debate on rolling back the Biden administration's COVID-19 vaccine mandates for some workers. (AP Photo/J. Scott Applewhite)

WASHINGTON -- The risk of a short-term government shutdown appeared to be easing late Thursday as the Senate pushed toward final approval of a bill that would fund the government through Feb. 18, sending the measure to President Joe Biden for his signature.

Senate Majority Leader Chuck Schumer told reporters it was "looking good" that senators would pass the bill and "make sure the government stays open."

The measure has been held up for days, and it was not immediately clear how the Senate would resolve a standoff with some conservative Republicans who threatened to stall the bill in hopes of forcing a debate over Biden's COVID-19 vaccine mandates. Some GOP senators said they would not support an expedited vote on the spending measure without also taking up a vote that would prevent funding for enforcement of a vaccine mandate for large employers.

But a vote was expected later Thursday.

The funding agreement among congressional leaders announced earlier in the day would keep the government running for 11 more weeks, generally at current spending levels, while adding $7 billion to aid Afghanistan evacuees.

The Democratic-led House passed the measure Thursday by a 221-212 vote. The Republican leadership urged members to vote no; the lone GOP vote for the bill came from Illinois Rep. Adam Kinzinger.

In the House, lawmakers bemoaned the short-term fix and blamed the opposing party for the lack of progress on this year's spending bills. Rep. Rosa DeLauro, chair of the House Appropriations Committee, said the measure would, however, allow for negotiations on a package covering the full budget year through September.

"Make no mistake, a vote against this continuing resolution is a vote to shut government down," DeLauro said during the House debate.

Before the House acted, Biden said he had spoken with Senate leaders and he played down fears of a shutdown.

"There is a plan in place unless somebody decides to be totally erratic, and I don't think that will happen," Biden said.

The House vote sent the measure to the Senate. Conservative Republicans opposed to Biden's vaccine rules want Congress to take a hard stand against the mandated shots for workers at larger businesses, even if that means shutting down federal offices over the weekend by blocking a request that would expedite a final vote on the spending bill.

It was just the latest instance of the brinkmanship around government funding that has triggered several costly shutdowns and partial closures over the past two decades. The longest shutdown in history happened under President Donald Trump -- 35 days stretching into January 2019, when Democrats refused to approve money for his U.S-Mexico border wall. Both parties agree the stoppages are irresponsible, yet few deadlines pass without a late scramble to avoid them.

House Republicans said during the debate that they had made it clear in the summer that they would not support spending bills that include "irresponsible spending increases and extreme policies."

"Unfortunately, that is exactly where we find ourselves," said Rep. Kay Granger, R-Texas.

But Democrats accused Republicans of rooting for shutdown, citing the remarks of Rep. Marjorie Taylor Greene, R-Ga., who said at one point in the debate: "Do not pass the CR. Shut it down."

Democrats were able to use their majority to advance the spending bill. They have a more difficult task in the 50-50 Senate, where objections by just one senator can slow a final vote past Friday's midnight deadline.

Sen. Mike Lee, R-Utah, said Democrats knew last month that several Republicans would use all means at their disposal to oppose legislation that funds or allows the enforcement of the employer vaccine mandate. He blamed Senate Majority Leader Chuck Schumer, D-N.Y., for not negotiating and for ignoring their position.

If the choice is between "suspending nonessential functions" or standing idle while Americans lose their ability to work, "I'll stand with American workers every time," Lee said.

GOP senators said the idea is to vote on stripping money that the Occupational Safety and Health Administration would use to implement the requirement that private employers with 100 or more workers ensure they are vaccinated or regularly tested.

"This is a chance to correct a wrong," said Sen. Roger Marshall, R-Kan., who undertook a similar effort against vaccine mandates during the last government funding standoff.

Schumer said early Thursday it was "not easy to reach this deal" and while most Republicans do not want a shutdown, a "few individual Republican senators appear determined to derail this important legislation because of their opposition to the president's lifesaving vaccine guidelines."

"Let's be clear, if there is a shutdown, it will be a Republican, anti-vaccine shutdown," Schumer said.

The White House sees the vaccinations as the quickest way to end a pandemic that has killed more than 780,000 people in the United States and is still evolving, as seen Wednesday with the country's first detected case of a troubling new variant.

Courts have knocked back against the mandates, including a ruling this week blocking enforcement of a requirement for some health care workers.

For some Republicans, the court cases and lawmakers' fears about a potentially disruptive shutdown are factors against engaging in a high-stakes shutdown.

"One of the things I'm a little concerned about is: Why would we make ourselves the object of public attention by creating the specter of a government shutdown?" said Texas Sen. John Cornyn, a GOP leader.

"There's too much chaos in our country right now, too much concern about omicron. The last thing we need is more confusion and fear," said Sen. Mitt Romney, R-Utah.

Senate Minority Leader Mitch McConnell, R-Ky., reiterated that there will be no shutdown.

"We're not going to do that," he said Thursday.

The administration has pursued vaccine requirements for several groups of workers, but the effort is facing legal setbacks.

A federal judge this week blocked the administration from enforcing a vaccine mandate on thousands of health care workers in 10 states. Earlier, a federal appeals court temporarily halted the OSHA requirement affecting employers with 100 or more workers.

The administration has also put in place policies requiring millions of federal employees and federal contractors, including military troops, to be fully vaccinated. Those efforts are also under challenge.

Polling from The Associated Press shows Americans are divided over Biden's effort to vaccinate workers, with Democrats overwhelmingly for it while most Republicans are against.

Some Republicans prefer an effort from Sen. Mike Braun, R-Ind., to vote to reject the administration's mandates in a congressional review action expected next week, separate from the funding fight.

Separately, some health care providers protested the stopgap spending measure. Hospitals say it does nothing to shield them from Medicare payment cuts scheduled to go into effect amid uncertainty about the new omicron variant. 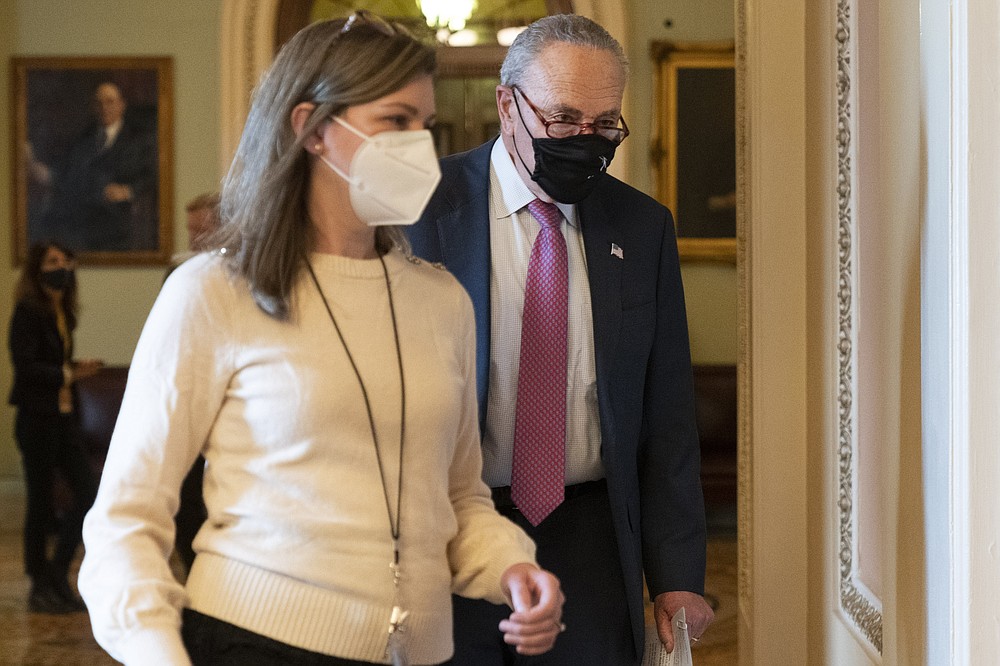 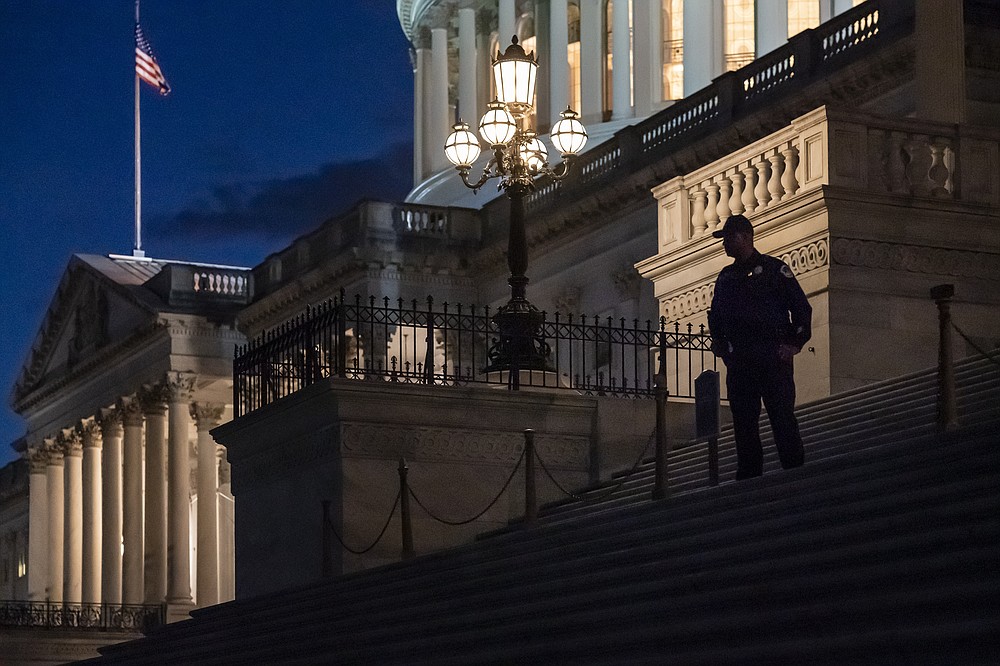 Night falls at the the Capitol in Washington, Thursday, Dec. 2, 2021, with the deadline to fund the government approaching. Republicans in the Senate are poised to stall a must-pass funding bill as they force a debate on rolling back the Biden administration&#x27;s COVID-19 vaccine mandates for some workers. (AP Photo/J. Scott Applewhite) 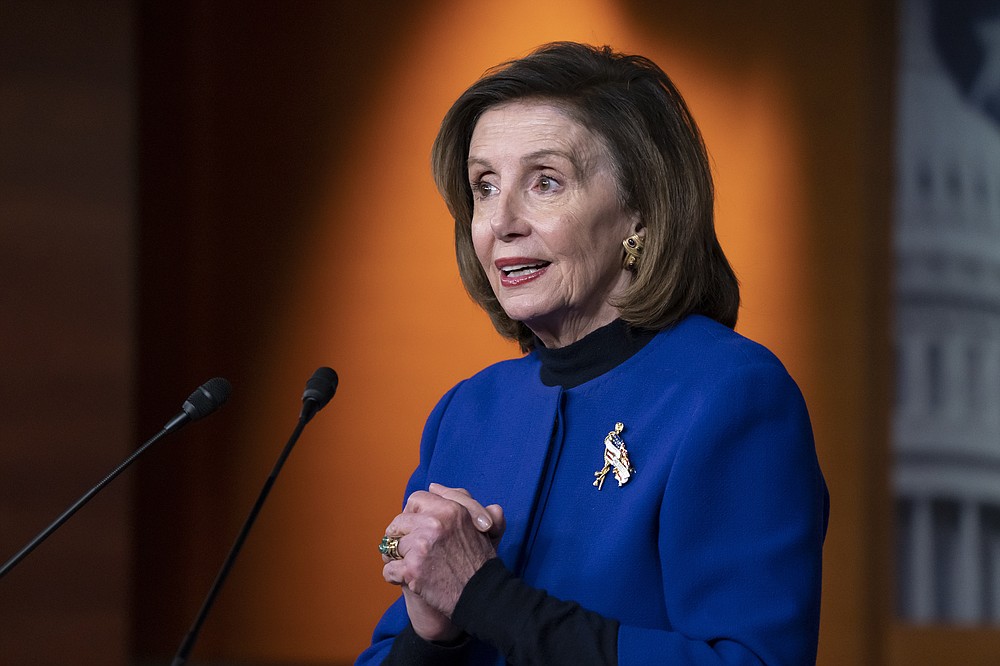 Speaker of the House Nancy Pelosi, D-Calif., updates reporters on the must-pass priority of funding the government, during a news conference at the Capitol in Washington, Thursday, Dec. 2, 2021. (AP Photo/J. Scott Applewhite) 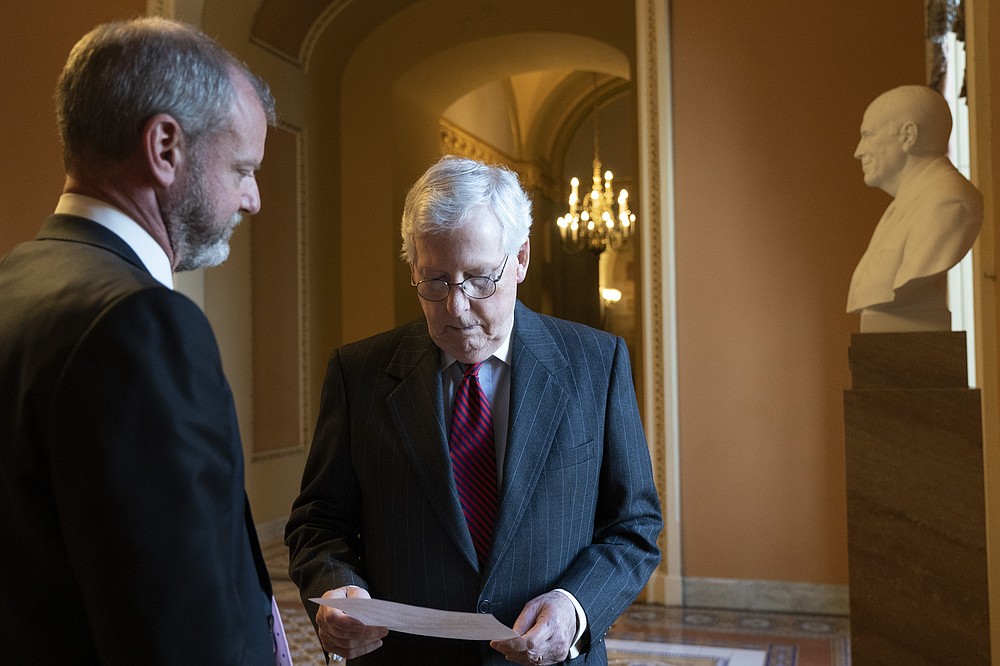 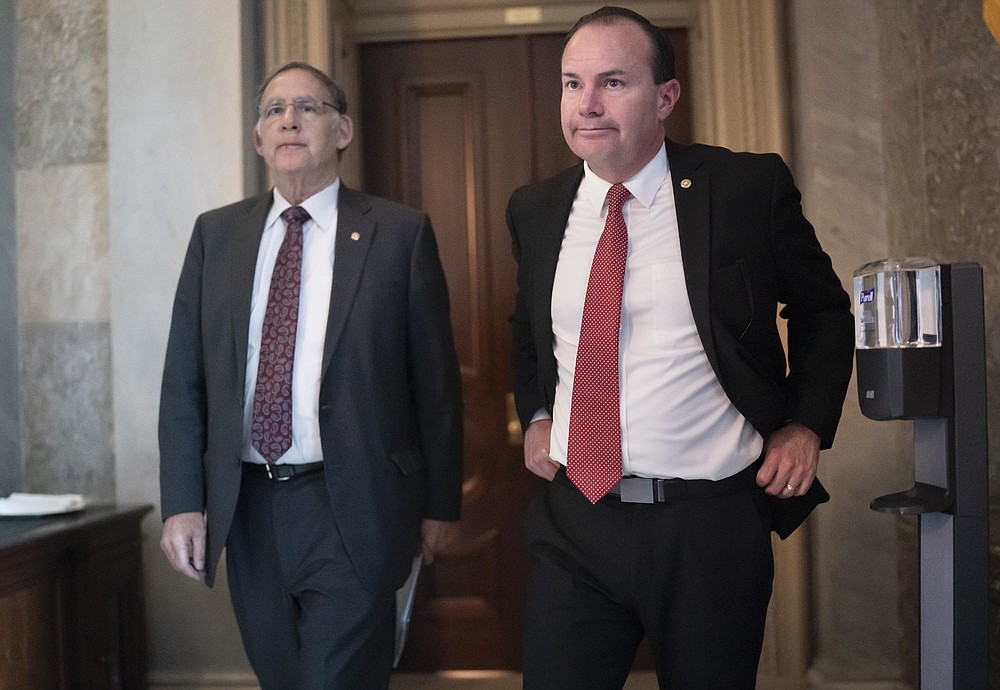 Sen. Mike Lee, R-Utah, joined by Sen. John Boozman, R-Ark., left, leaves a private GOP lunch meeting as he continues to press for a vote on his proposal to barring vaccine mandates that the Biden administration has ordered for U.S. companies, at the Capitol in Washington, Thursday, Dec. 2, 2021. (AP Photo/J. Scott Applewhite)