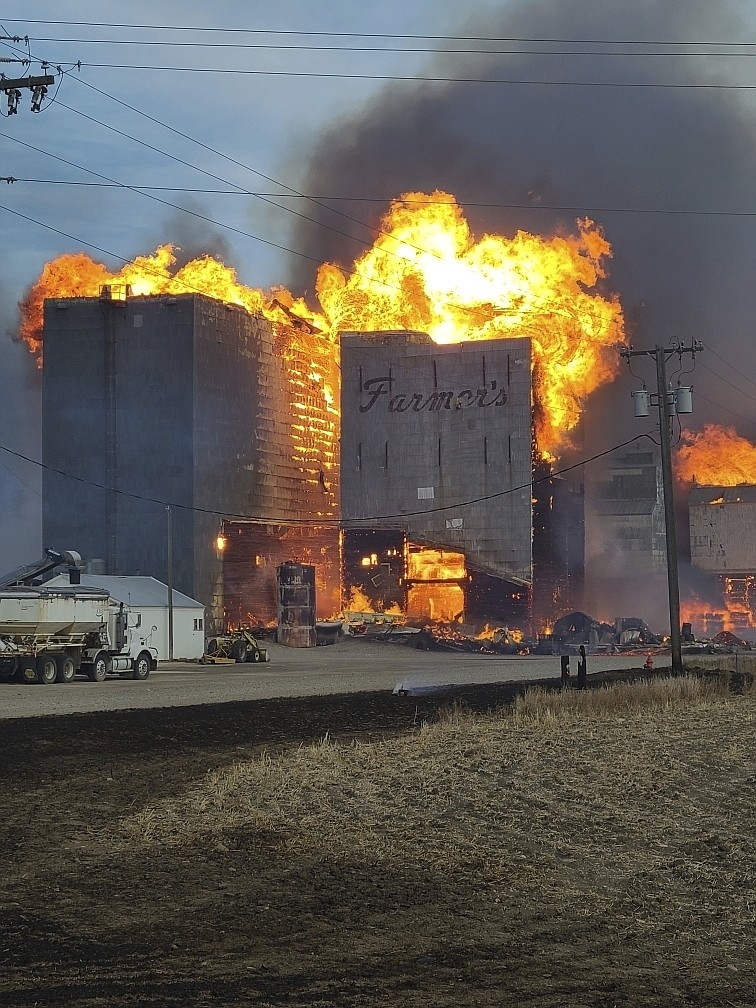 HELENA, Mont. -- A late-season wildfire that came amid unseasonably warm weather and was pushed by strong winds ripped through a tiny central Montana farming town overnight, burning 24 homes and four grain elevators that had stood for more than a century.

Fire crews were putting out hot spots Thursday and officials were assessing the damage done by the fire, which burned 20 square miles (50 square kilometers) of prairie and agricultural land before burning into the town of Denton on Wednesday afternoon. The town's nearly 300 residents evacuated. There were no reports of injuries.

"Rural fire agencies are continuing to work to prevent any further spread or damage," the Fergus County Sheriff's Office posted on Facebook on Thursday morning. "This work will continue for several more days."

The fire started late Tuesday north of the town of Stanford and it was not initially considered a threat to Denton.

Crews had the fire "pretty well put out other than hot spots" by daylight Wednesday, said Brock Linker, a volunteer firefighter. "Pretty much the same time the sun came out the wind started blowing really, really hard."

The fire flared up again.

"The dirt and the smoke were blowing so bad you couldn't even see the flames and we didn't even know where the fire was a lot of the time when it was out in the prairie," Linker said Thursday.

Linker was working near a house close to where the fire had started at midday Wednesday when he got a call saying the fire had moved into Denton after having traveled across at least 6 miles (9.6 kilometers) of drought-stricken land.

Extreme conditions like these are often from a combination of unusual random, short-term and natural weather patterns heightened by long-term, human-caused climate change. Scientists have long warned that the weather will get wilder as the world warms. Climate change has made the West much warmer and drier in the past 30 years.

"The south side is where it really ripped through the houses, all the buildings in town, pretty much straight in line east of town from the elevators," Linker said.

The power outage due to the downed power lines that sparked the fire shut off water pumps, leaving the town without water, officials said.

The evacuation order was lifted at noon Thursday, Lewellyn said. Only essential traffic was being allowed in the area and some residences that survived the fire were still without power.

Crews were using skid steers, backhoes and excavators to turn over debris and put out hot spots in town, Linker said.

Montana Highway 81 west of Denton was closed because a bridge was destroyed by the fire. A railroad bridge in the same area was also destroyed.

Highway 81 is one of only two ways in and out of Denton on a paved road, Linker said.

Other fires have been burning in Montana in recent days as gusty winds fanned the flames amid drought and unseasonably warm temperatures.

Areas of Montana east of the Continental Divide have had down-sloping west winds for about a week, the National Weather Service said.

With such winds, the air warms and wind speeds increase as the air moves down the slope of the Rocky Mountains, said Cody Moldan, a meteorologist in Great Falls.

Several areas of the state saw record wind gusts on Wednesday and the town of Jordan in central Montana reached a high temperature of 78 degrees Fahrenheit (26 Celsius).

Central Montana is among several areas of Montana that are experiencing exceptional drought, according to the U.S. Drought Monitor.

From Sept. 1 through Nov. 30, Lewistown recorded 1.09 inches (2.8 centimeters) of precipitation, which is 3.08 inches (7.8 centimeters) below normal for those three months, the weather service said. Meanwhile, the average temperature in November was 7 F (4 C) above normal.

Thursday was expected to be the last really warm, windy day, Moldan said. A weak cold front is forecast to move into northern Montana on Friday with a stronger cold front on Saturday afternoon that will bring winds, but also some precipitation, he said.

Other fires that burned in Montana on Wednesday included one south of the city of Great Falls that burned 11 homes and seven garages along with sheds and vehicles. About 65 people evacuated, Cascade County officials said.

There were two grass fires near Browning, where there were also power outages because the wind was knocking trees into power lines, officials said. 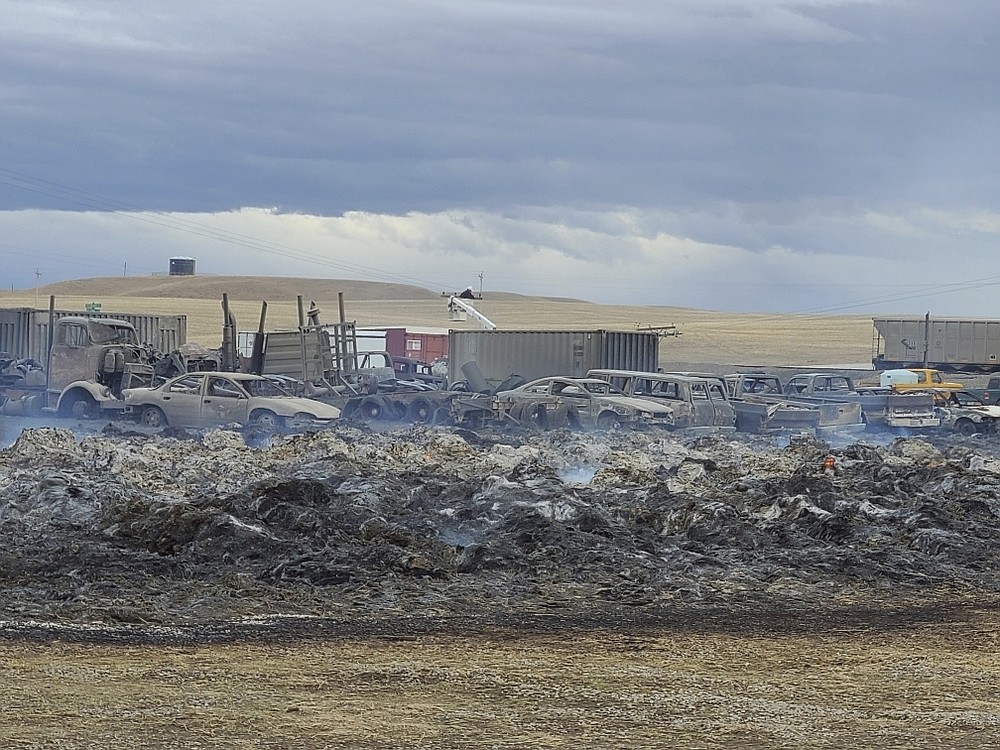 In this photo provided by the Fergus County Sheriff&#x27;s Office a pile of hay bales smolders in front of burned vehicles in Denton, Mont. on Thursday, Dec. 2, 2021. A late-season wildfire, pushed by strong winds, ripped through the tiny central Montana farming community on Dec. 1, 2021, burning two dozen homes and four grain elevators. About 300 residents of the town were evacuated early Wednesday afternoon. The evacuation orders were lifted Thursday. No injuries were reported. (Fergus County Sheriff&#x27;s Office via AP) 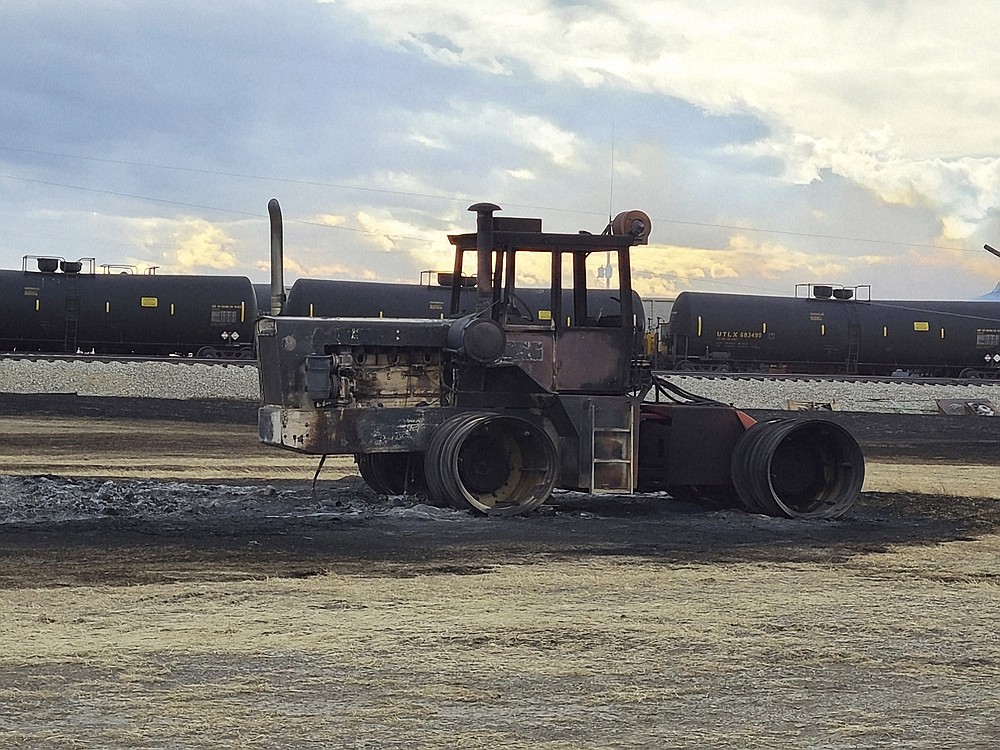 This photo provided by the Fergus County Sheriff&#x27;s Office shows a tractor with the wheels burned off sitting along the railroad tracks in Denton, Mont. on Thursday Dec. 2, 2021. A late-season wildfire, pushed by strong winds, ripped through the tiny central Montana farming community on Dec. 1, 2021, burning two dozen homes and four grain elevators. About 300 residents of the town were evacuated early Wednesday afternoon. The evacuation orders were lifted Thursday. No injuries were reported. (Fergus County Sheriff&#x27;s Office via AP) 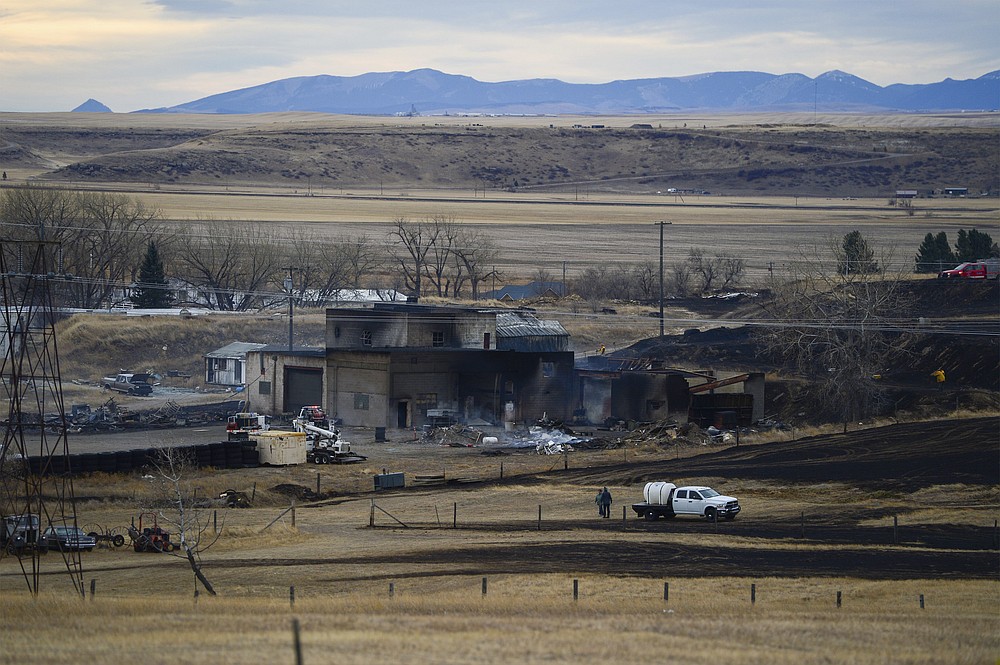 A fire burned through the Gibson Flats area south of Great Falls, Mont., on Wednesday, Dec. 1, 2021, destroying 11 homes, seven garages and 11 outbuildings, fire officials said. The fire was one of three wind-driven fires on Wednesday that forced evacuations in Montana. A fire near Denton led hundreds of residents to flee the central Montana town on Wednesday. Some buildings in the town were on fire. Another grass fire forced temporary evacuations near Browning, east of Glacier National Park. (Rion Sanders/The Great Falls Tribune via AP)