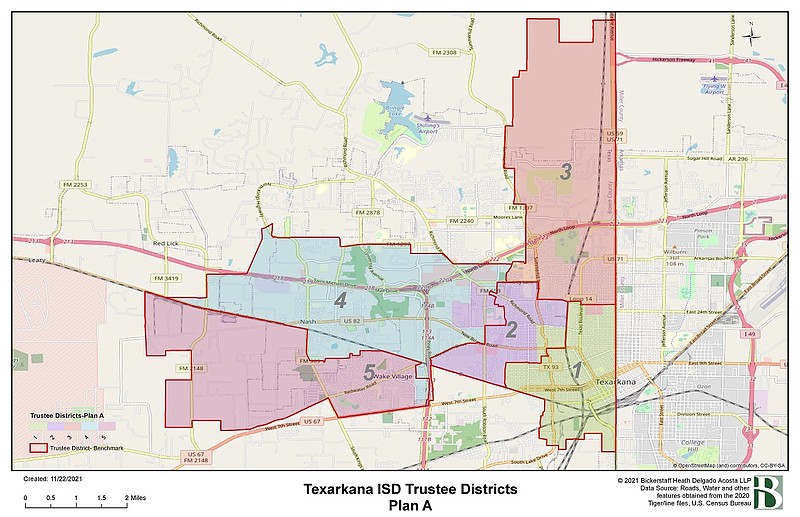 TEXARKANA, Texas – The Texarkana Independent School District Board of Trustees proposed no amendments to a redistricting plan presented to them at a called meeting on Monday morning.

The plan, presented by the Bickerstaff Heath Delgado Acosta firm out of Austin, Texas, is expected to bring the district zones into balance without majorly affecting minority populations in Districts 1 and 2.

"This redistricting process involves modifying the boundaries of the areas that trustees represent so that those areas are balanced in terms of population," Superintendent Dr. Doug Brubaker said. "This process does not affect school attendance boundaries."

A public hearing was held, but no one spoke.

According to the 2020 Census data, the District's trustee districts are currently not of sufficiently equal population and must be redrawn in order to comply with the "one-person, one-vote" (equal population) principle established by the U.S. Constitution.

Given that, redistricting was recommended in order to bring them into balance for future election cycles. Redistricting efforts would line the overall district up with no more than a 5% deviation between trustee districts.

The Bickerstaff Heath Delgado Acosta firm found that Districts 1,2 and 3 are too small, while Districts 4 and 5 are too large. District 2 is the smallest – too small by about 1,000 people – And District 4 is the largest - too large by 1,300 people.

"Our overall deviation for the initial assessment is 37% out of balance. And we're going to want to bring that under 10% – the legal threshold," said Kimberly Kelley, with the Bickerstaff Heath Delgado Acosta firm. "This Plan A that we're presenting today does accomplish that. The deviation here ends up being 7.99%."

TISD's criteria for redistricting states that the plan should address minority representation within districts and, if possible, avoid retrogression in the percentage of population and voting age demographics consistent with the existing minority populations.

TISD wanted to keep these numbers as close to their present states as possible, while also balancing the districts overall.

"When we're shifting the population here into these districts, we want to try to maintain that percentage to the extent that we can so we don't dilute that vote," Kelley said.

While District 4 is the most populated, with this plan some of District 5's population would be pulled into 4, which would then be transferred to the other three districts.

Again, we were able to increase and not substantially decrease the minority populations in districts 1 and 2. We were also able to maintain each incumbent within your own existing district."

TISD will consider adopting a final redistricting plan at the Dec. 15 meeting in the regular session.