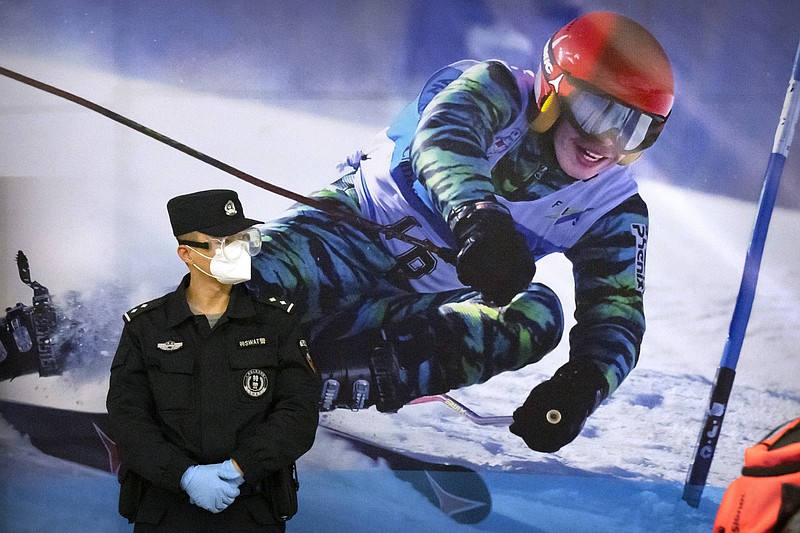 FILE - A police officer wearing a face mask and goggles to protect against COVID-19, stands near a poster of a skier on the wall at a train station in Zhangjiakou in northern China's Hebei Province, Friday, Nov. 26, 2021. China is threatening to take &#x201c;firm countermeasures&quot; if the U.S. proceeds with a diplomatic boycott of February's Beijing Winter Olympic Games. Foreign Ministry spokesperson Zhao Lijian on Monday accused U.S. politicians of grandstanding over the issue of not sending dignitaries to attend the events that China hopes will showcase its economic development. (AP Photo/Mark Schiefelbein, File)

Refusing to send an official U.S. delegation while U.S. athletes compete at the Beijing Olympics is like dropping off dessert at a party you plan to protest by staying away. Your absence might cause a stir at the start, but it will be pretty much ignored by the time people tuck into their pie.

To be sure, refusing to rub elbows with tyrants and assorted swells from the International Olympic Committee is the right thing to do. It's been done before, and for less. The regime in Beijing is enslaving Uyghur Muslims in Xinjiang province, crushing dissent in Hong Kong, threatening neighboring Taiwan, and been accused most recently of "disappearing" tennis star Peng Shuai after she made a sexual assault allegation against a close ally of President Xi Jinping.

So while the Biden administration's "diplomatic boycott" is a half-step at best, it's also a lot farther than any organization save the Women's Tennis Association has gone to hold China accountable for its grave and varied human rights abuses. What remains to be seen is whether any other stakeholders follow their lead.

"The athletes on Team USA have our full support," she said. "We will be behind them 100% as we cheer them on from home. We will not be contributing to the fanfare of the Games. ...

"It cannot," Psaki added a moment later, "be business as usual."

Yet that's exactly what the hosts and their IOC lapdogs are counting on.

Chinese Foreign Ministry spokesperson Zhao Lijian accused U.S. politicians of "purely wishful thinking and grandstanding. If the U.S. side is bent on going its own way, China will take firm countermeasures," he said, but provided no details on how the Chinese might retaliate.

The same IOC that struck a mighty blow against apartheid by withdrawing its invitation to South Africa ahead of the 1964 Olympics, and excluding the rogue nation from any Games until 1992, lost its moral compass a long time ago. The people in charge now care only about the Benjamins, or in this case, the Renmibi.

In a statement, the IOC expressed relief "that the participation of the (U.S.) athletes are beyond politics and we welcome this." It also labeled the move to keep U.S. dignitaries away "a purely political decision for each government, which the IOC in its political neutrality fully respects."

Please. Just witness the political whitewash IOC President Thomas Bach and his lieutenant Dick Pound attempted two weeks ago, when the question about Peng's well-being roiled the sports world. They claimed the IOC's experts (who were not named) concluded unanimously on the basis of a video call with Peng (that has not been made public) "that she was fine."

"She just asked that her privacy be respected for the time being," Pound said in an interview with CNN. Thankfully, he wasn't asked for updates on the Uyghurs in prison or the Hong Kong protestors in hiding.

The NBA notably backed down in a 2019 confrontation with Chinese officials after then-Houston Rockets general manager Daryl Morey tweeted in support of protestors in Hong Kong. Sponsors, television stations and streaming services there dropped NBA games for months; the league estimated the fallout from Morey's tweet cost it $400 million.

The NBA is hardly the only big American brand that has been cowed into silence as the price of doing business in China escalates. And it's not just the Olympic sponsors, either. Starbucks, Apple, Google, Nike and a host of others may find it harder to chart a course forward as already turbulent relations with China head toward even choppier air.

One thing you can be certain of is that none of them will take the path that chief executive Steve Simon chose for the WTA. He ordered tournaments suspended in China -- a move that could cost his organization a cool $1 billion -- until he saw proof that Peng "is free, safe and not subject to censorship, coercion and intimidation."

In a separate CNN interview not long after, Simon explained his rationale. All the heads of state and kings of industry contemplating what to do next would choke trying to be half as sincere.

"There are too many times in our world today when we get into issues like this and we let business, politics, money dictate what's right and what's wrong," Simon said. "We have to start, as a world, making decisions that are based on right and wrong, period." 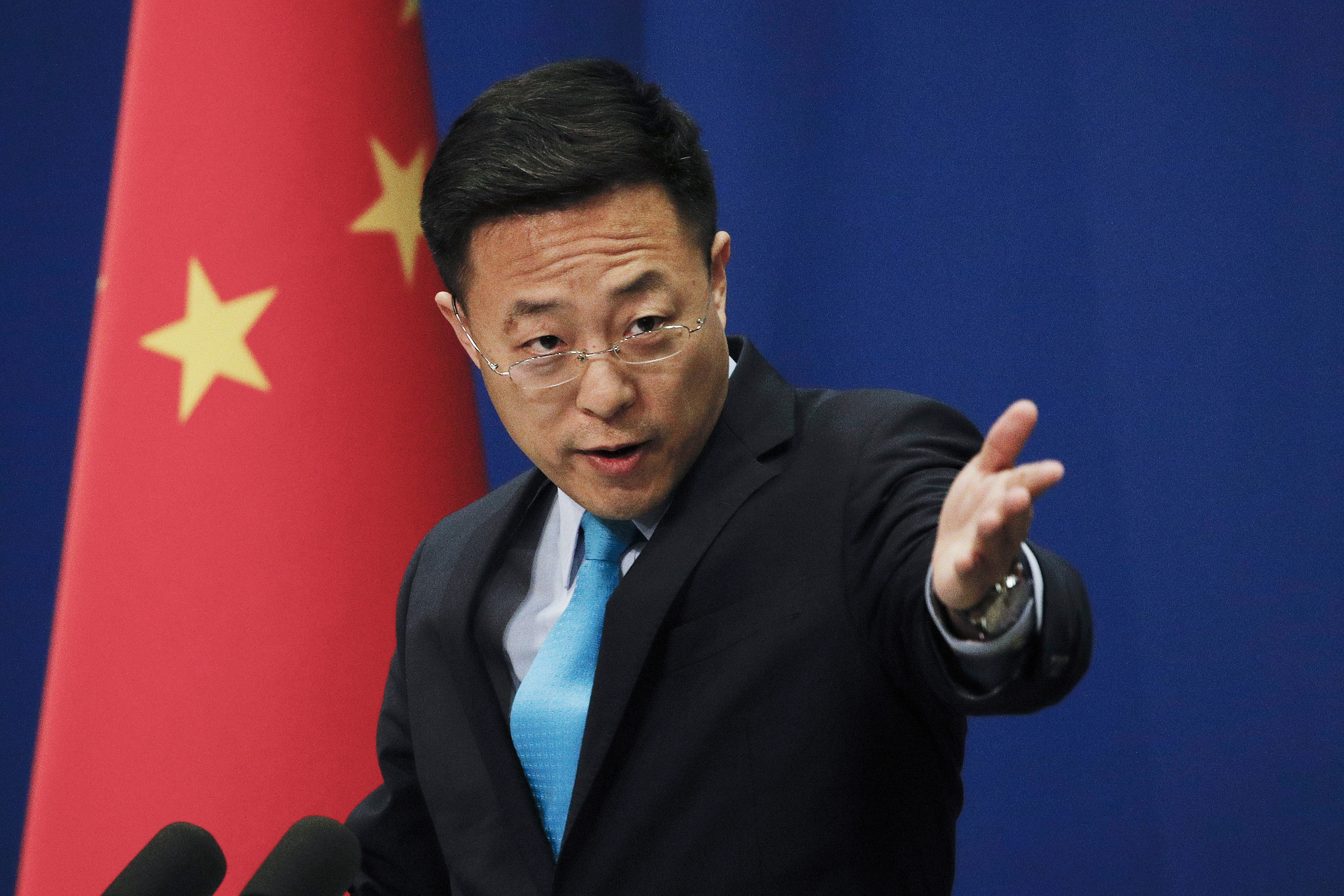 FILE - In this file photo taken Monday, Feb. 24, 2020, Chinese Foreign Ministry spokesperson Zhao Lijian speaks during a daily briefing at the Ministry of Foreign Affairs office in Beijing. China is threatening to take “firm countermeasures" if the U.S. proceeds with a diplomatic boycott of February's Beijing Winter Olympic Games. Zhao on Monday, Dec. 6, 2021, accused U.S. politicians of grandstanding over the issue of not sending dignitaries to attend the events that China hopes will showcase its economic development. (AP Photo/Andy Wong, File) 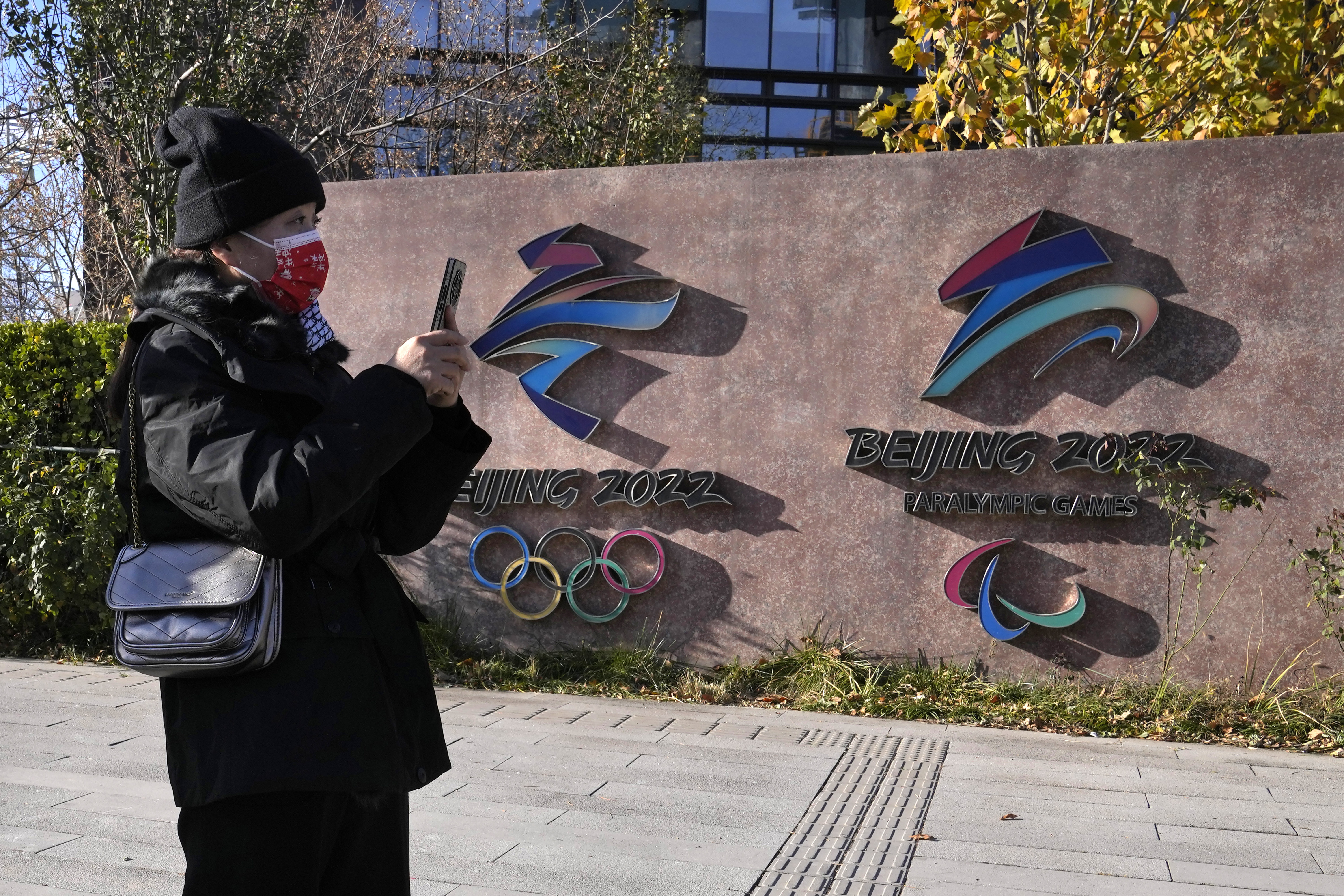 A visitor to the Shougang Park walks past the logos for the Beijing Winter Olympics and Paralympics in Beijing, China, Tuesday, Nov. 9, 2021. China on Monday, Dec. 6, 2021 threatened to take "firm countermeasures" if the U.S. proceeds with a diplomatic boycott of February's Beijing Winter Olympic Games. (AP Photo/Ng Han Guan) 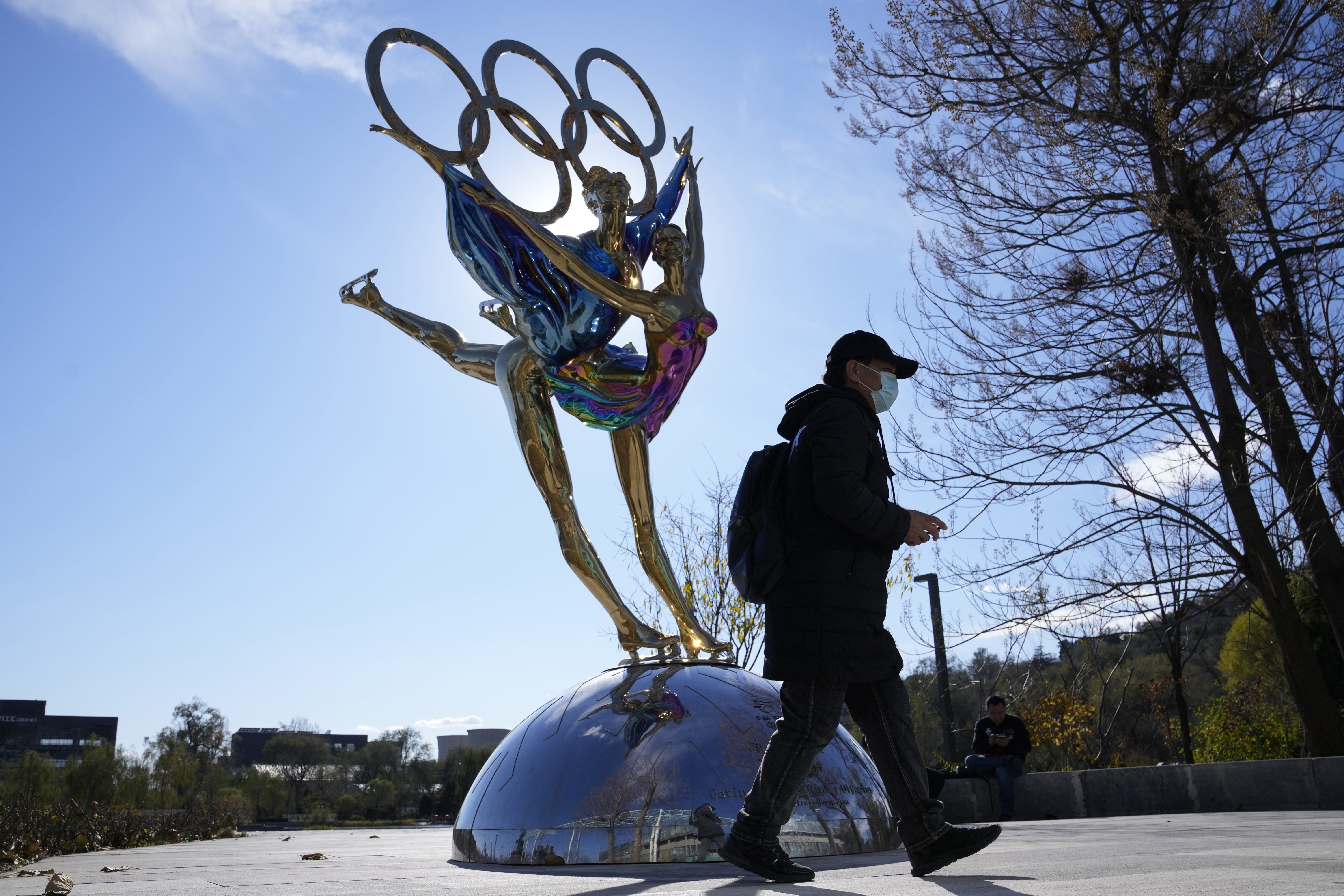 A visitor to the Shougang Park walks past the a sculpture for the Beijing Winter Olympics in Beijing, China, Tuesday, Nov. 9, 2021. China on Monday, Dec. 6, 2021, threatened to take "firm countermeasures" if the U.S. proceeds with a diplomatic boycott of February's Beijing Winter Olympic Games. (AP Photo/Ng Han Guan)