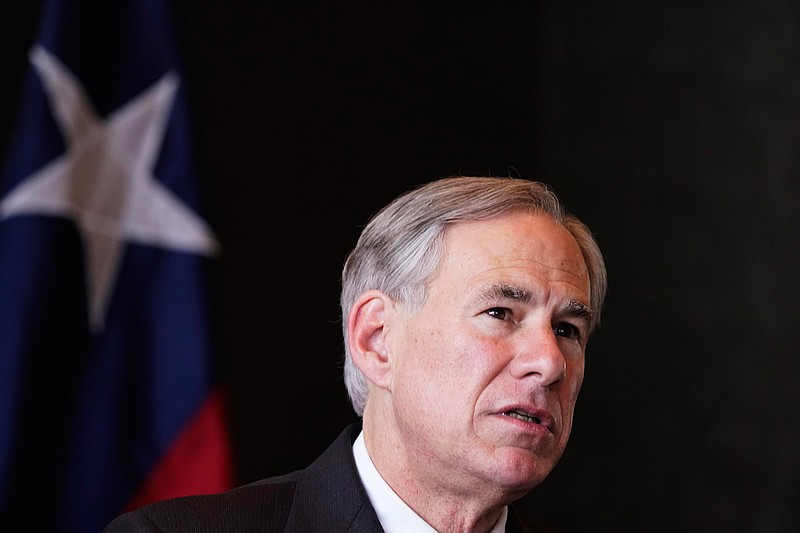 In this Wednesday, March 17, 2021, file photo, Texas Gov Greg Abbott speaks during a news conference about migrant children detentions, in Dallas. Texas child welfare officials say they've received three reports of abuse and neglect at a San Antonio coliseum that is holding more than 1,600 immigrant teenagers who crossed the southern border. Child welfare officials would not reveal details about who made the allegations, but Abbott said his understanding was that they came from someone who had been inside the facility. One of the allegations include sexual abuse, but no further details were provided. (AP Photo/LM Otero, File)

DALLAS - When Greg Abbott last week unveiled plans to build a wall along the nation's southern border with Mexico, he showed that his aspirations are much higher than being reelected as Texas governor.

Abbott wants to be the heir apparent to former President Donald Trump and his political movement, and plans a border tour with him on June 30.

If Trump opts against a 2024 presidential campaign, his supporters and conservative activists will be looking for a champion to challenge President Joe Biden, or whoever emerges as the Democratic presidential nominee.

Abbott has a nearly identical checklist, though the Texas Legislature failed to approve a controversial elections bill. The bill died when House Democrats walked out of the chamber to prevent an eleventh-hour vote.

Now Abbott is expected to call a special session to compel lawmakers to approve an elections bill and bail reform.

Abbott hopes by Sept. 1, when laws are locked in for the next two years, he'll have a checklist as conservative and Trumpish as any governor in the nation.

And keep in mind, Abbott has been criticized by some conservative activists for shutting down businesses to fight against the coronavirus pandemic and issuing a mandate to wear masks to stop the spread of the virus. Abbott ended the mandate in March and allowed businesses to operate at full capacity. He was probably thrilled that Biden responded to his order by calling him a Neanderthal.

Having Texas build a border wall - Abbott's Trump card of sorts - will allow him a special piece of the Trump lane. After all, no other governor is building a wall, a policy proposal that was the centerpiece to Trump's successful 2016 presidential bid.

Critics have blasted Abbott's proposals, pointing out that spending money on a border wall is impractical. There are other ways, they say, to secure the border. While that view may prove correct, the idea of building a wall between the United States and Mexico is a political jackpot for Republicans, just as Trump proved more than four year ago.

Trump's call for the wall, and his unfulfilled promise that Mexico would pay for its construction, was ludicrous to many, but was political magic.

For Abbott, the symbol of the Texas wall gives voters a lingering image that he's fighting back against the policies of Biden. It's similar to the mantra he used as Texas attorney general, often bragging about getting up in the morning and thinking of ways to sue then-President Barack Obama.

The GOP base loves fighters, and the merits of the issues are secondary to the resistance of what they fear: progressive politics.

As for his reelection, building a border wall removes a talking point for his critics in the 2022 GOP primary.

Abbott's biggest risk is the general election, but that only comes into focus if Democrats are able to field a quality candidate. In 2014 Abbott easily withstood a challenged from former Dallas County Sheriff Lupe Valadez, a poorly funded Dallas Democrat. That stress-free contest allowed him to use his considerable resources to help fellow Republicans across the finish line.

If the state's power grid continues to be worrisome and other issues under Abbott's control become problematic, the idea of a border wall could have blowback.

Otherwise, Abbott's move will do what it's designed to accomplish. It puts him in the 2024 national conversation.

DeSantis is looking at Abbott and tipping his cap - and even sending Florida police to help Texas on the border.