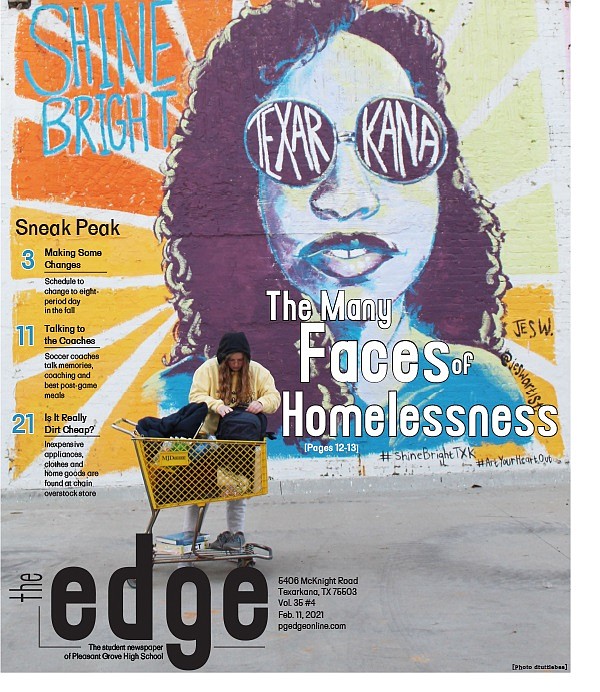 Front page of one of The Edge newspaper's 2020-2021 editions. (Photo courtesy of Shelby Akin/PGISD)

TEXARKANA, Texas -- The 2020 edition of Pleasant Grove High School's "The Edge" newspaper was named a Pacemaker Finalist by the National Scholastic Press Association last month, and various individual awards were announced for PG staff and students.

Texas High School's "Tiger Times" was also named a finalist, but the Texarkana Independent School District has not yet announced individual awards/finalists or any other information.

The NSPA named 65 high school student newspapers, news magazines and specialty magazines around the country as finalists in its prestigious Pacemaker competition.

Of the 65 finalists, 28 will earn the Pacemaker award, which will be announced at the NSPA Awards Ceremony as part of the JEA/NSPA Fall National High School Journalism Convention on Saturday, Nov. 13.

The PG journalism department is advised by Charla Harris, who was named the 2019 National High School Yearbook Adviser of the Year.

"I think the kids have really high standards and really high expectations for themselves," Harris said. "We've built a program here that they just want to do their best. And if the best is best in the nation, then that's fine with them too.

"They did an excellent job. I had comments from some of my adviser friends across the nation that it was some of the best work they'd seen. So, I was really proud of them."

The Edge also had staff members nominated for Individual Awards by the NSPA. Gillian Knowles was nominated for Story of the Year, and reporters Gillian Knowles, Cadence Pov, and Nistha Neupane were named COVID-19 Reporting Finalists for their story about privacy restrictions and district protocols.

"Of all of the 50 (individual) categories, we had a tenth of them," Harris said. "We've never had that many finalists. And all of the other schools are pretty big, so that's a big deal."

Editors of The Edge newspaper in 2019-2020 were Delia Tuttlebee, Alex Norton and Delaynie Keeney.

"There's a lot that goes into journalism -- talking to people, getting confident in getting your message across, understanding how design affects the message and what story we need to be telling," Harris said. "I think understanding that is kind of hard sometimes, and once they get that, they can use that skill anywhere they go. Just being confident in your abilities is something you can take anywhere, as well."