This week in 1969: A Chicago court sentenced Black Panther leader Bobby Seales to four years in prison for contempt of court; NASA launched Apollo 12 from Cape Kennedy; Government officials reported the United States was stepping up air raids on Laos; a nuclear non-proliferation treaty was signed by The U.S. and Soviet President Nikolai Podgorny; and a singer from Butcher Holler, Kentucky had her 24th hit record.

Several recording artists have recorded songs despite protests from their record producer or record label and according to Loretta Lynn, her 1969 hit song "Wings Upon Your Horns" was one of those tunes.

Loretta commented, "We were in the studio recording that song and when I got to the chorus: "You're the first to ever make me fall in love and not take me," my record producer Owen Bradley came out of the control room and told me that I would never get away with that because the song was too dirty. I asked him what was dirty about the song and he told me "horns" and I just didn't understand that. He didn't like it a bit but I recorded the song the way I wrote it and it was a hit."

Loretta's Decca Records single "Wings Upon Your Horns" came on the country music charts Nov. 29, 1969 and peaked at No. 11. It was her 24th charted song and was on the charts for 16 weeks.

Loretta Lynn placed 79 songs on the country music charts between 1960 and 2010, including 16 No. 1s. Her 79 charted song included duets with Ernest Tubb and Conway Twitty.

Loretta joined The Grand Old Opry in 1962 and was inducted into The Country Music Hall of Fame in 1988.

She received a Grammy Lifetime Achievement in 2010 and was honored at The Kennedy Center in 2003.

Join Doug Davis weekend mornings from 6 a.m. to noon on KPIG-FM Radio – 103.9 - for "Roots of Country" on Saturdays and Sundays for "Sunday Country." You can also listen on line at Mypigradio.com. 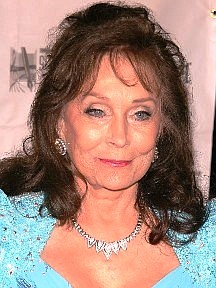