Vietnam vet tells of his year of combat duty 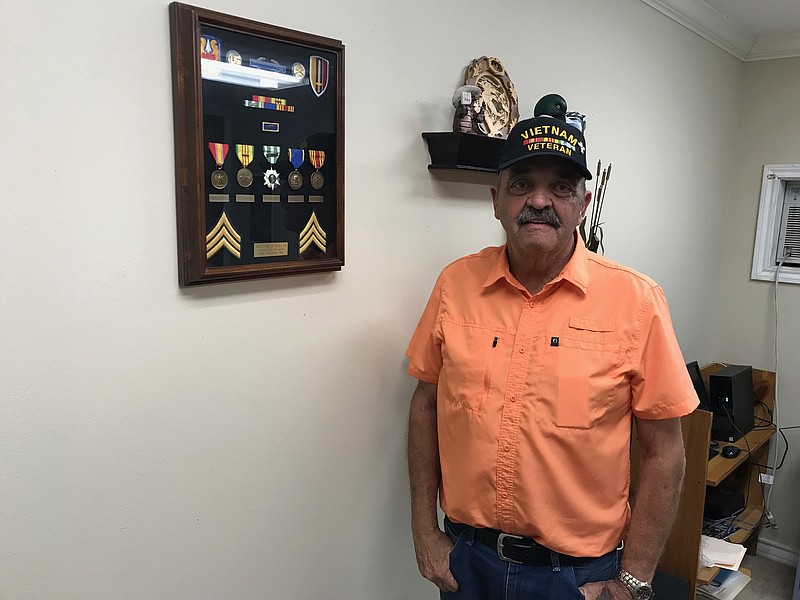 Former U.S. Army Sgt. Carl "Butch" Hall served with the 199th Infantry Division in Vietnam, from May of 1967 to May 1968. His unit's task involved searching for cadres of enemy forces seeking to infiltrate areas in and around Saigon. (Staff Photo by Greg Bischof)

REDWATER, Texas - For U.S. Army Sgt. Carl "Butch" Hall, the scenery must have had a Kentucky Derby look about it as he and several other U.S. Army strike force troops leaped from their helicopter.

However, once on the ground, Hall noticed instantly that there was no recreation to be had.

"Our helicopter flew us into Saigon as we landed on a horse racing track there," Hall said. "It was January 1968, it was warm and humid. And there were two nearby hotels full of Viet Cong units with their weapons hid inside caskets so they could smuggle them where they needed them," Hall said recently.

At that place and time, the purpose of Hall's infantry unit was to conduct strike force ambushes on Viet Cong military units attempting to infiltrate into areas near Saigon as well as in areas 40 miles south, into the Mekong Delta.

"At that time, we could see small enemy rockets exploding right inside Saigon during the Tet Offensive," he said.

Born and raised in Hooks, Texas, Hall graduated high school in the Class of 1965 before going to work at Lone Star Army Ammunition Plant.

"In 1965, I was making bullets at the plant, just before I started going to college in September of 1965 at Texarkana College," he said. "I went there for a year and dropped out, and within a year's time, I got a draft notice."

The Army sent Hall to Shreveport for a physical before sending him further south to Fort Polk for six weeks of basic training. From there, he went through six weeks of Advanced Infantry Training.

"The Army actually had a "Little Vietnam" set up in Fort Polk for our advanced training," Hall said. "There were swamps and villages that looked just like what we would later see."

"Following combat training, we were all sent to California where we boarded a commercial passenger plane that took us to Hawaii first, then to Guam, then on to Vietnam," Hall said. "We then left the plane immediately and we were given just a week to get used to the climate."

"We used helicopters to deploy us on a regular basis," he said."We could get about seven to eight men in a helicopter and we got deployed to anywhere we needed to be. We worked mostly at night, conducting hit operations on enemy units."

However, Hall added that the enemy wouldn't hesitate to take the offensive and sweep into the pineapple plantations, because they could use the plantations as alternate roadways to get where they needed to go.

"This afforded them canals they could go through and occasionally, we would get mortar shell fire from them," he said. "They would also rig trip lines to set off hand grenades if your food hit the trip line. Sometimes, even the wind generated by our helicopter rotors would set off these booby traps."

Hall further said that oftentimes, the jungle's insect population would get large enough to be a second enemy.

"During the monsoon season, you could get rain 24 hours a day, for two months and when you had to walk through swamp water, you'd get covered with leaches and mosquitoes."

However, upon arrival back home, he received word in advance regarding the reception that might await him and his fellow service members.

"Once we flew out of Vietnam, we felt good, but we were told that hippies would be waiting for us at the airport, to yell and spit at us once we land in San Francisco," Hall said.

"When we landed and started to walk through the airport, we had to walk through some hippies gathered there, while they call us "baby killers," but we were geared up enough to look like we weren't going to let ourselves take much trouble if anything happened."

Once back in the states, the Army granted Hall a 30-day leave, after which he eventually reported to Fort Hood, near Killeen, Texas, for his discharge.

"I was discharged in September of 1968, at which time I went back to Texarkana College to get some basic courses out of the way, then I went back to Lone Star and they hired me back," he said.

As far as his combat-related injuries were concerned, Hall said he was amazed at how lucky he was, even though he did get exposed to Agent Orange at least three or four times while serving.

"I had my M-16 blown out of my hands twice and my lungs got infected, possibly by Agent Orange, but the Good Lord took care of me," he said.