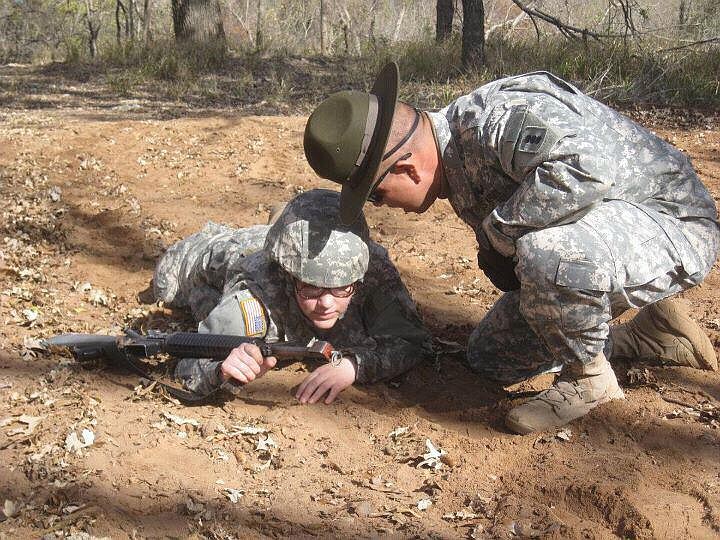 Private Kara Moser gets run through her paces during Army Basic Training at Fort Sill, Oklahoma. Moser found out much about herself at her Fort Sill experience, including finding out she was afraid of heights, as well as how to overcome it to get the mission done.

An animal lover and would-be world traveler, Kara Moser enjoyed her time as a soldier in the United States Army.

But it was a bit of a winding road getting there.

"I joined the Army in 2011 as a 14 Tango, a Patriot launching station operator/maintainer," she said. "I joined for active duty and spent my basic training and advanced individual training at Fort Sill, Oklahoma."

When Moser got there, it was the initial Army experience she expected, with shouting drill sergeants and frantic privates running and marching about, slowly getting their Army boots under them as they learned. But it was not just soldier skills she gained.

"I found out I was afraid of height, and I had no idea that was the case," she said. "We were out at the rappelling tower and it became my turn to go down. I swung my legs over and ended up clocking one of my drill sergeants. She was gearing up to yell at me, then she saw the look on my face. She realized what was going on and just said, 'That better not happen again, Private.' I then immediately started down the tower. I did not want to repeat the exercise."

Basic training lasted 10 weeks, and advanced individual training went for nine and when Moser got her assignment for her first duty posting, she found out she was already there.

"Fort Sill for my first duty posting, yay me," she said. "I wanted to go to Fort Bliss, most classmates went there. Also, I have family there. To be stuck at Sill was frustrating."

So she packed up her gear and reported to her unit. And after only three months there, the unit packed up all of its gear and equipment for a deployment to Kuwait.

"It was overwhelming," she said. "It was my very first time to go overseas. And Kuwait is very hot."

The deployment lasted for 13 months, where Moser did her job as a systems maintainer on the Patriot launch system. But she did not get a chance to go do anything of a tourist kind of nature. And then, it was back to Sill, which is when misfortune struck.

"I was getting ready to re-enlist, when I got injured," she said. "I really wanted to go to Germany. But my injury prevented that. Ended up getting med-boarded and sent home, instead."

Right now, she is going to school on the GI Bill and gearing up for a career in veterinary medicine, but she may not be entirely through with the service just yet.

"If I can get physically fit enough to try, I may go the veterinarian career route in the service," said Moser.

As for her time already served, she looks back on it fondly.

"I really enjoyed my time," she said. "And for those going in, keep your head down and enjoy it, too. Remember, you can do anything."