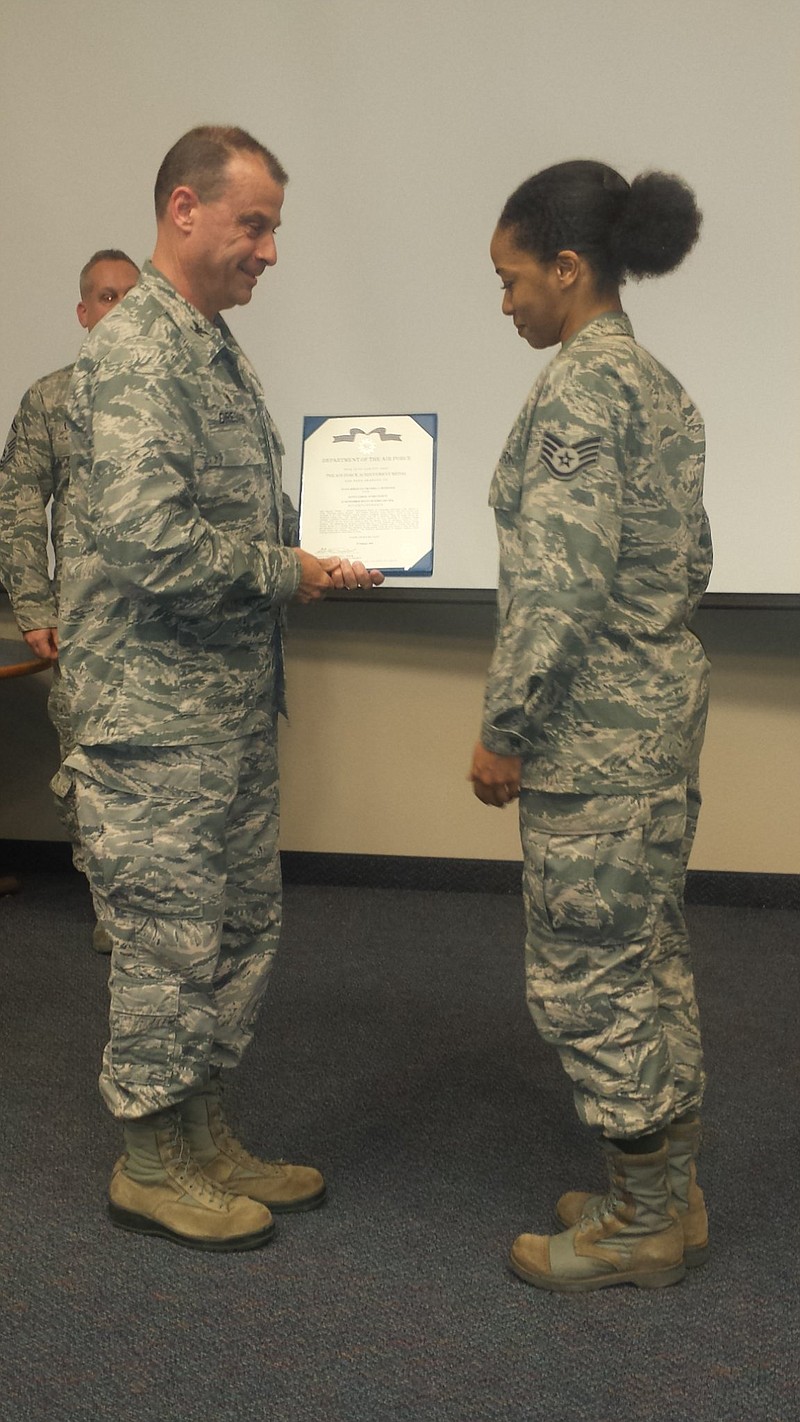 Then-Staff Sgt. Chandra Walker receiving the Air Force Achievement Medal from her commanding officer, Col. Craig Drescher. Walker’s career has built her expertise in computer operations. She continues to build her knowledge and hopes to work with Texas A&M-Texarkana to impart that knowledge to students at some point. (Submitted photo)

Chandra Walker, an airman in the Air Force Reserves, has always aimed high.

Graduating from Arkansas High School in 2008, she signed up with the reserves in her last year of pursuing her bachelors degree in business at the University of Arkansas-Pine Bluff.

After completing tech school, she was then assigned to Barksdale Air Force Base in Shreveport, Louisiana, for her first assignment. Her initial Air Force career was unusual for a reservist. She was called up immediately for active duty, which ended up lasting several years. However, the atypical nature of Walker's opening experiences did not stop there.

"When I enlisted, I thought I would be doing lots of interesting things," she said. "But after three months of my initial assignment, my unit I was assigned to got deactivated. Since I was a reservist, I just marched on and started my masters at Texas A&amp;M-Texarkana, an MBA."

She completed that in 2013. She was also reassigned to new duty at Little Rock Air Force Base.

She immediately took her new expertise and began applying it to her job and her unit.

"Communications, strategic thinking, interpersonal relationships, entrepreneurial outlook, the things I learned, I put it all to work," she said. "All this helped to get me promoted."

Walker is now a tech sergeant (E-6) in the Air Force Reserves.

She is still at Little Rock Air Force Base and is pursuing another masters degree in information technology online with Texas A&amp;M-Texarkana (her third, she also has a masters in data science and analytics).

Walker is off active duty status and back on reserves, and divides the rest of her time between a civilian federal government position and raising her children.

Through all this, Walker has loved her journey with the Air Force. She has been offered positions in the newly created Space Force and though she likes the idea, she is content to stay an airman.

"I love it," said Walker. "I have no plans to retire from the Air Force. Not anytime soon. I love it, they will have to kick me out."

As to those thinking about service, she says just do it.

"Do it, just one enlistment," said Walker. "Four years, the experience, the friendships, all that is priceless. You just cannot put a price on it. Do it. It will be good for you. I absolutely love what I do."