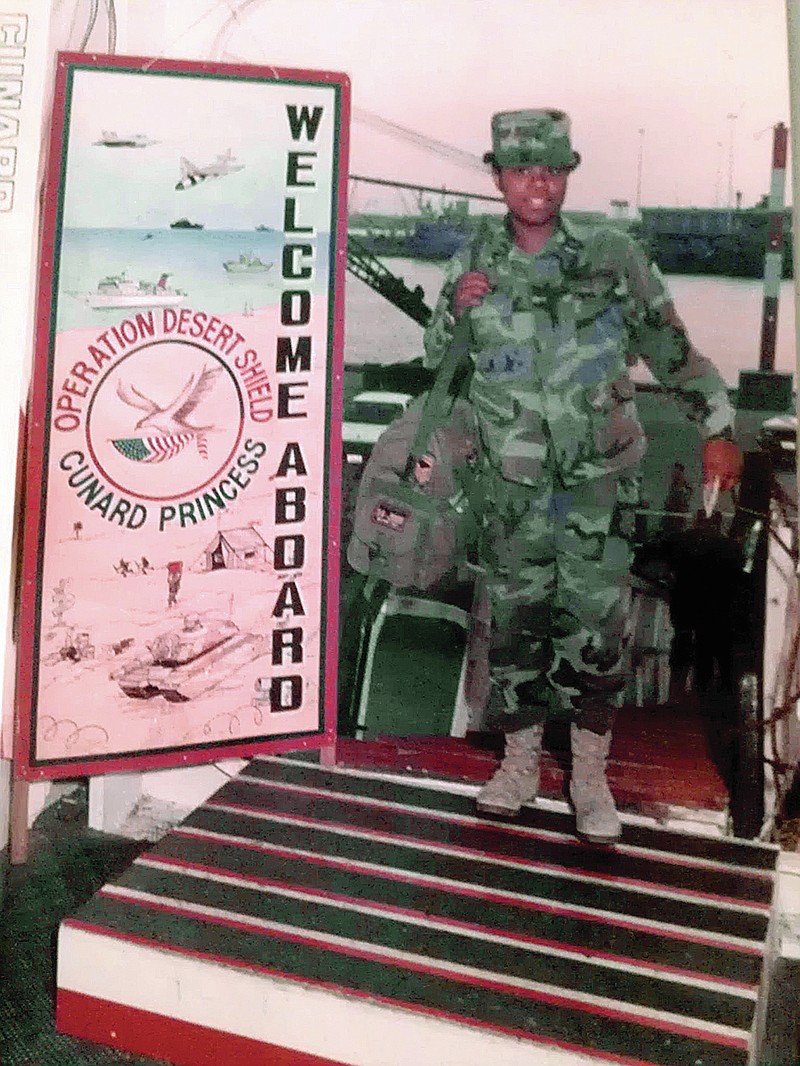 NASH, Texas -- Sherri Cooper, affectionately known as "Coop" to her friends and co-workers, had joined the Army Reserve fresh out of DeKalb High School.

She and some of her classmates had enlisted with the military after graduation in 1987. She was looking forward to spending the Christmas holiday with her family, especially her newborn son, who was 3 months old.

Then she got the wake-up call of a lifetime. That's when she found out about sacrifices, personal sacrifices that hit home.

"The Army told me we were shipping out that very day," she recalled. "We quickly reported to Fort Hood (near Killeen, Texas) and on Dec. 26 we boarded a large C5 transport plane and flew to Iraq. We were part of 'Operation Desert Shield.'"

Cooper had to leave her baby with her mother and sister, as well as the baby's father.

"It was hard leaving my baby, but I knew he would be well taken care of," she said. "My son was so young he doesn't remember any of it, thankfully."

She and her fellow soldiers didn't know where they were headed when they boarded the plane, only that it was called "Concrete City" and it was somewhere in Iraq.

Despite the absence of her child and family, Cooper said the troops in her unit, the 755th, were very supportive and willing to help. All you had to do was ask.

"I didn't have to worry about anyone but me when I was over there," she said. "I could depend on my unit and they became like my best family. They were family to me. The military is a family, and they've supported me throughout my life. I still stay in contact with several of them weekly. We've got a fellowship, camaraderie and bond that can't be broken."

But the U.S. Army had a duty to perform, protecting Saudi Arabia from Iraq and some of its neighbors like Afghanistan.

"In the U.S. Army, we can fight each other, but we won't let anybody else fight against us," she said. "We're fighters and freedom isn't free. We all had to make sacrifices -- and some gave the ultimate sacrifice with their lives."

The war had already started when she landed in the Middle East. Iraq was shooting loads of Scuds, which are a type of long-range surface-to-surface guided missile able to be fired from a mobile launcher.

"Once you heard the sirens go off, you quickly got into combat mode. First, you had to grab for a gas mask and quickly put it on," Cooper said. "And we had a great military who shot down almost all of the Scuds before they could hit the ground and cause a bunch of deaths and damage."

Not only was the landscape different than Texas, but the culture and ways of life were completely different, too.

"They look at the women differently over there," she said. "In certain areas you had to cover your face with a veil, with only your eyes showing. And most of their clothes covered their entire body. I made sure to stay away from those places, and I didn't want any part of that."

Cooper and most of her unit were mostly unharmed during her tour that lasted several months.

Then it was time to go home.

Home. Back to family. Back to baby boy.

"It was a lot of adjusting for me," she said. "I hadn't seen my baby in months and I had to get to know him again, and he had to get to know me. It's not easy adjusting to civilian life when you've been in a war zone. Over there, you just want to survive. To stay alive. It took some real getting used to being back home, but gradually it got easier."

The military, her second family, came through for her again a few years ago when she was diagnosed with breast cancer.

"I've always been a fighter and I'm not a quitter," Cooper said. "I was going to fight this disease and my military family helped me every step of the way. They were just awesome.

"Some are still of my best friends to this day."

Cooper said one of the reasons she joined the Army was because she wanted "structure in my life.

"It seems like I had always had someone telling me what to do, and I guess I got used to the structured life."

Plus, the military benefits aren't bad, either, said Cooper, who got out of the military as an E-4, equivalent to the rank of corporal.

She went back to college, using her military benefits. She received her bachelor's degree in criminal justice, and then her master's.

"Of course, it was in criminal justice. I can't get away from it too far. It was what I liked and what I wanted to do."

For the past 20 years, Cooper has worked as one of the lead supervisors in the Bowie County Probation Department. She oversees adults who are on probation because of an addiction to drugs, alcohol and prescription medicines, which resulted in criminal behavior.

And she doesn't mind being called "Coop."

"It seems like everybody has called me that wherever I go," she said. "I don't mind, actually I kinda like it because it seems to fit my personality."

And with Veterans Day here, Cooper said she is proud of her time spent in the military and happy to be a veteran.

"It changed my life."