Lidia Bastianich keeps it simple in her new cookbook 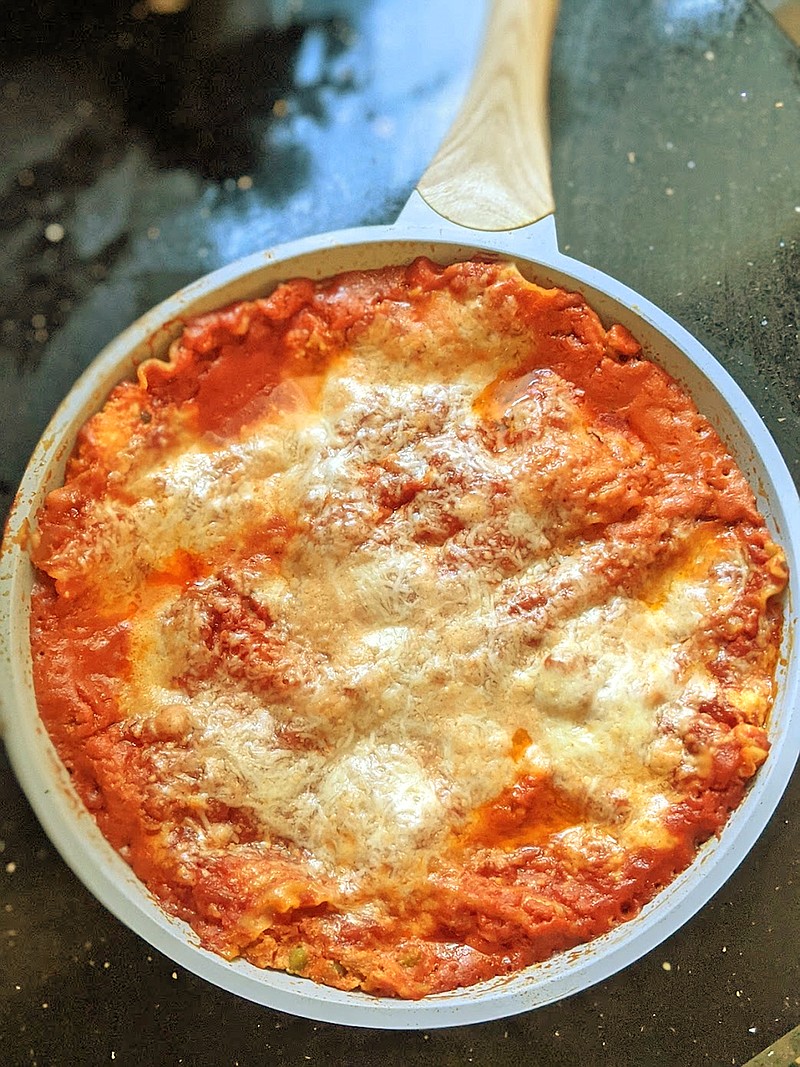 Oven-ready lasagna noodles are cooked in marinara on the stovetop with three cheeses in this easy one-pan pasta dish. (Gretchen McKay/Pittsburgh Post-Gazette/TNS)

Cookbook author, TV host and celebrity chef Lidia Bastianich is one of the most famous Italian cooks in the U.S. She's also a successful restaurateur, with eight restaurants specializing in Italian and Italian-American cuisine.

Yet when she prepares meals for her own family at home, she's like the rest of us: She likes to keep it simple, with straightforward, no-fuss recipes that don't require impeccable technique or fancy ingredients.

Take cannellini beans, for instance. Found in every classic minestrone and many Italian salads, the white kidney-shaped legume can also add an inexpensive punch of protein to a plate of greens or make a fish dish more substantial.

"They are perfectly good and delicious from the can," Bastianich says on a recent phone call from her home in New York.

Using food right from a can or box (such as oven-ready dried pasta) also streamlines the cooking process while eliminating the pot and pans that tend to pile up with scratch cooking.

Her latest cookbook, "Lidia's a Pot, a Pan, and a Bowl" (Knopf, $30), hit store shelves on Oct. 19. It has 100-plus homey and easy-to-prepare recipes that require fewer steps and ingredients than her previous tomes, but still deliver incredible Italian flavor. As she writes in the book's forward: "Sometimes, you just want to cook something that doesn't leave you with a pile of dishes."

While the theme of simplicity will likely resonate with home cooks who churned out three meals a day at the height of the pandemic, Bastianich actually started work on the cookbook before the coronavirus shutdown. But much of the testing with her daughter and co-author, Tanya Bastianich Manuali, and longtime PBS culinary producer Amy Stevenson was done during quarantine in her home in Queens, New York.

This is one of Lidia Bastianich's favorite recipes in her new cookbook, "Lidia's a Pot, a Pan, and a Bowl." It combines beef short ribs, carrots and potatoes in a rich beer broth thickened with a pestata of almonds and dried porcini mushroom -- the perfect dish for a chilly fall evening.

Served with crusty bread and a green salad, this makes a hearty lunch or simple supper.

Combine porcini and almonds in the work bowl of a mini-food processor. Pulse to make an almost smooth pestata.

Heat olive oil in a large Dutch oven over medium heat. Season short ribs with 1 teaspoon salt and several grinds of pepper. Brown short ribs all over, removing them to a plate as they brown, about 5 minutes per batch.

Add carrots and toss to coat in the oil. Cook carrots until they begin to brown, 2-3 minutes, then make a space in the pan and add the tomato paste there. Cook and toast the tomato paste in that space until it darkens a shade or two, about 1 minute. Add thyme and bay leaves, and stir to combine.

Add pestata and stir to toast lightly, 1-2 minutes. Add beer, bring to a boil and cook until beer is reduced by half. Add back the short ribs and add 4 cups of stock. Adjust the heat so the liquid is simmering, set the lid ajar and simmer until the short ribs are almost tender, 60-75 minutes.

Add remaining 2 cups stock, onions and potatoes. Return to a simmer and cook until everything is very tender and the sauce is thick and flavorful, 40-50 minutes more. Stir in parsley, remove bay leaves and serve.

-- "Lidia's A Pot, A Pan and A Bowl" by Lidia Matticchio Bastianich and Tanya Bastianich Manuali (Knopf, October 2021)

Everyone loves lasagna but a traditional recipe is tough to make on a weeknight. This skillet recipe comes together in about 45 minutes using oven-ready noodles.

Heat a large nonstick skillet over medium heat. Add enough olive oil to make a thin film on the bottom of the skillet. Add 1 3/4 cups marinara with 1/4 cup water and bring to a simmer over medium heat.

Layer three of the noodles in the skillet over the sauce. (I had to break the ends to fit.) Dollop 1/3 of the ricotta mixture on top of the pasta in the skillet, and spread it out to cover noodles; then drizzle with 1/4 cup of the tomato sauce. Make two more layers, ending with noodles. Drizzle with remaining 1 1/2 cups sauce. Top with the remaining 1/2 cup mozzarella and 1/4 cup grated cheese.

Cover skillet and simmer until pasta is al dente (test by piercing the center with a paring knife), 20-25 minutes.

Preheat broiler. Sprinkle remaining 1/4 cup grated cheese on top and broil the lasagna until the top is nicely browned, about 1 minute.

Let sit for 15 minutes before cutting and serving so the lasagna will settle and portions can be cut more easily.

-- "Lidia's A Pot, A Pan and A Bowl" by Lidia Matticchio Bastianich and Tanya Bastianich Manuali (Knopf, October 2021) 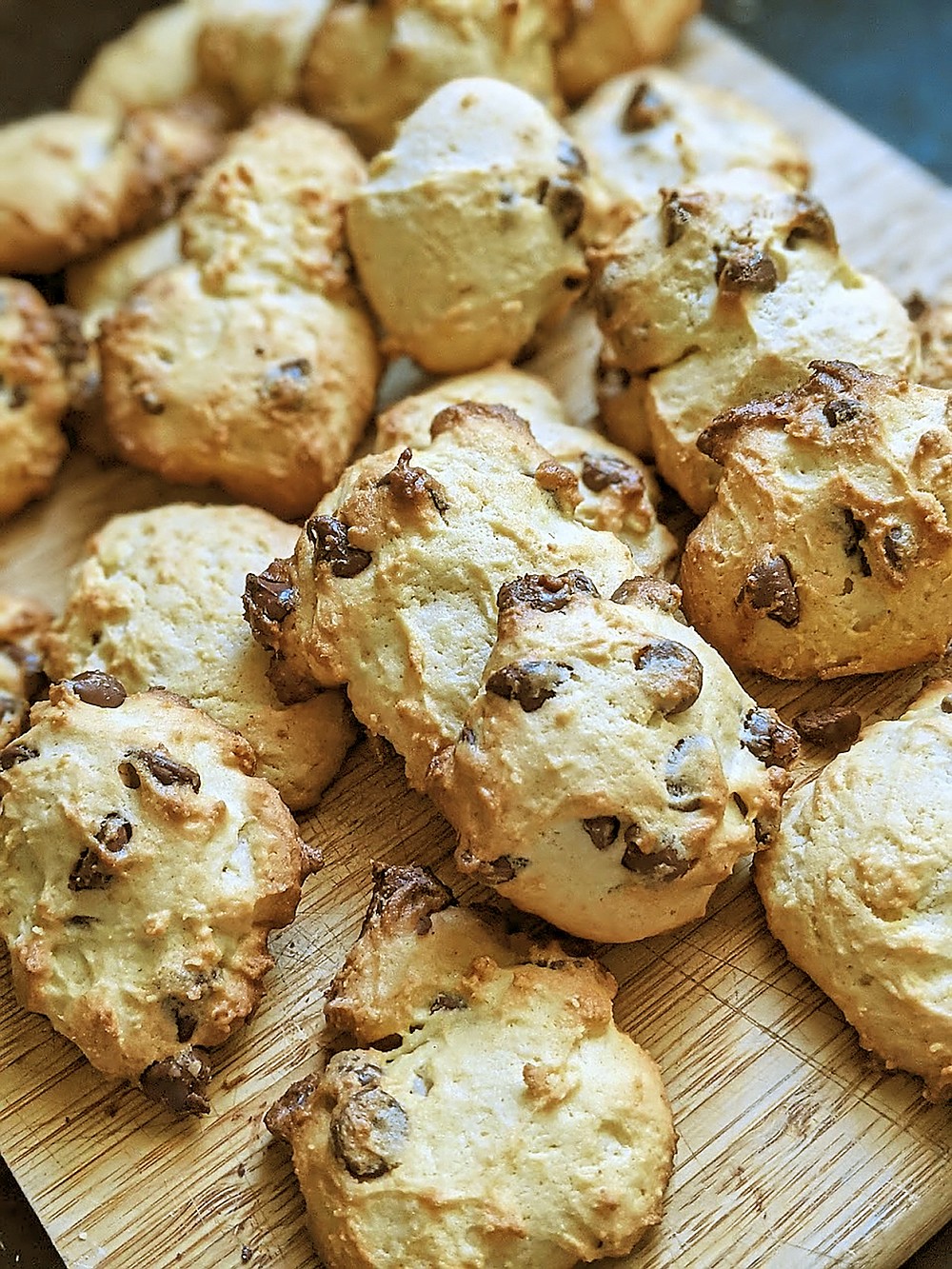 These cakey chocolate chip cookies from Lidia Bastianich's new cookbook have a secret ingredient -- they're made with ricotta cheese. (Gretchen McKay/Pittsburgh Post-Gazette/TNS)