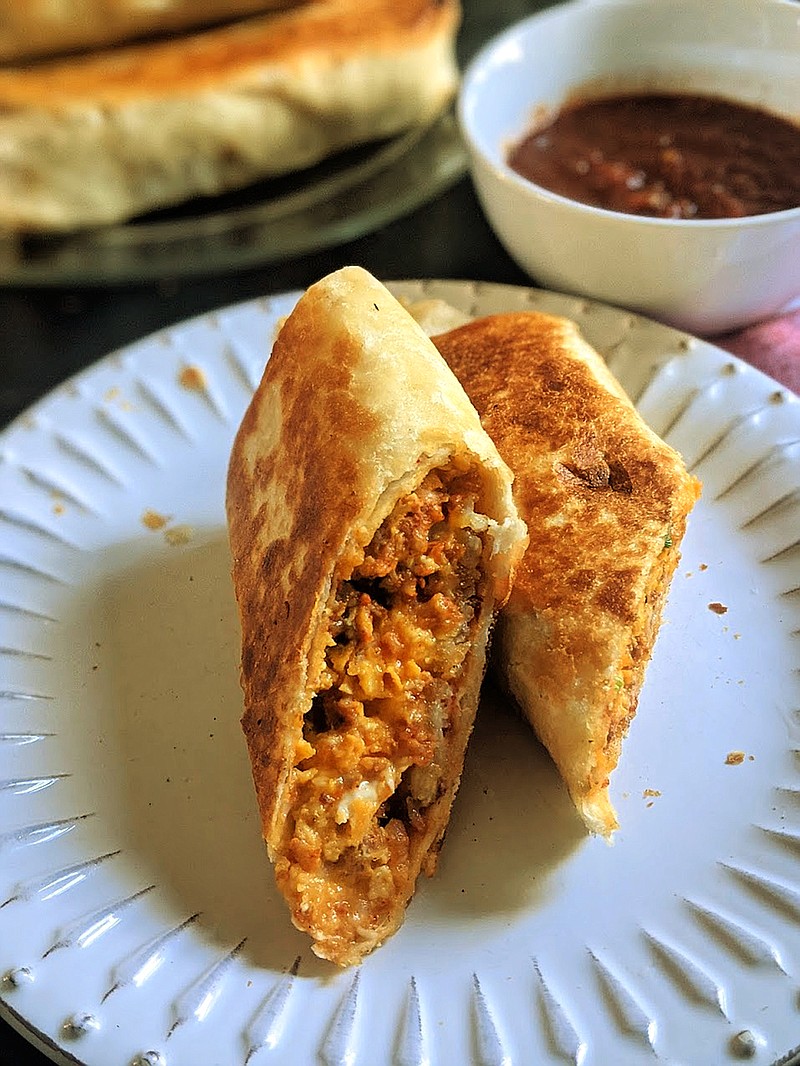 Everyone agrees a good breakfast is a great start to your day. All the better if you can make it ahead of time and carry it with you in the a.m. Grab-and-go breakfast burritos are a lifesaver on those busy mornings when just getting out the door on time seems like an accomplishment.

These warm flour tortillas wrapped around bacon, potatoes and the optional egg have been a runaway hit ever since they appeared on a menu at Tia Sophia's in Santa Fe, New Mexico, in the mid-1970s. Today, even McDonald's and Taco Bell include them among their breakfast items.

Yet homemade is always better, and this breakfast burrito hits on all cylinders. Filled with a zesty mix of scrambled egg, chorizo sausage, crispy tater tots and Mexican cheese, it's a hearty and sublime mix of contrasting textures and flavors. It also includes a zesty sour cream sauce for some smoky heat.

I was inspired to make these burritos after spying a package of Salvadoran-style chorizo sausage from Logan's Sausage Co. in a grocery store near my daughters' apartment in Arlington, Virginia. Seasoned with vinegar, paprika, garlic and other spices, it's not as spicy as Mexican chorizo but still wonderfully tangy and bright.

The best thing about burritos is that they're incredibly versatile. If you don't care for chorizo, you can substitute bacon, ham or Italian sausage, or black or refried beans. You can also replace the tater tots with pre-cut hash browns.

For a tamer burrito, cut the amount of minced chipotle or sauce in the sour cream or omit it altogether. Don't forget pico de gallo or your favorite salsa for dipping.

These can be eaten fresh from the skillet or be reheated the next morning in the toaster oven. They also can be wrapped in aluminum foil, placed in a resealable plastic bag and be frozen and reheated as needed.

1 or 2 chipotle chiles in adobo sauce, minced, plus 1 tablespoon sauce

8 large eggs, beaten with a little water or milk

In small bowl, stir together sour cream, minced chipotle chiles and sauce and lime juice until well blended. Add a pinch of salt, stir and then set aside while you prepare the burritos.

Make burritos: In large nonstick skillet, heat 2 tablespoons oil until hot and shimmering. Add tater tots to pan in a single layer and, using a spatula, press into bottom of pan to flatten. Cook tots until they are golden brown and crispy, about 2-3 minutes on each side. Transfer to a paper-towel lined plate and set aside while you make the eggs.

Wipe skillet clean with a damp paper towel, bring to medium heat and add chorizo. Cook sausage, breaking it up with a wooden spoon as you go, until it is crumbly (it should look like ground meat), and is well browned and slightly crispy.

Add beaten eggs and cook until they start to set, using a rubber spatula to toss and turn the eggs as they cook to keep them from sticking to the bottom of the pan. Stir in chopped green onion and toss gently to combine.

Reduce heat to low, and sprinkle shredded cheese on top of eggs, then gently fold in. Cook until cheese starts to melt, about 30 seconds. Remove from heat and cover to keep egg mixture warm while you prepare the tortillas.

Wrap tortillas in a damp paper towel and microwave for about 10 seconds to soften. To assemble burritos, spread a tablespoon of chipotle sour cream on the bottom third of each tortilla, leaving a 3/4 -inch border. Layer one-sixth of the tater tots on top of the sour cream, followed by one-sixth of the egg mixture.

Fold sides of tortilla over filling, then fold up the bottom and roll tightly around filling.

Wipe the skillet clean again with a paper towel, then add remaining 1 tablespoon oil and heat until shimmering over medium heat. Place burritos in pan, seam side down, and cook until they're golden and crispy, turning once, about 1-2 minutes per side.

Serve warm with salsa or pico de gallo on the side, or slice and wrap in aluminum foil for breakfast on the go.