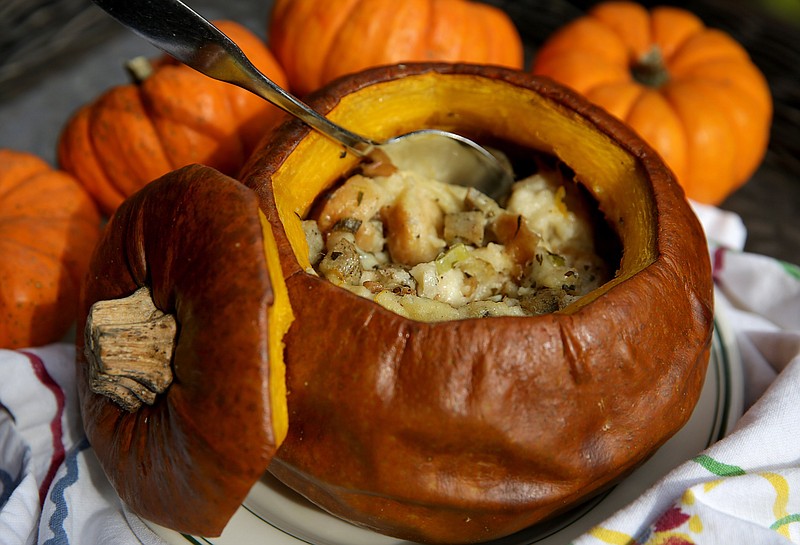 Pumpkins aren't just meant for pie or playful evisceration. They are also a vegetable, a squash, and can therefore be eaten.

The question is: How? How to best eat a pumpkin?

The other questions is: Why? Pumpkins don't taste particularly good. Why would you want to eat them?

The answer is: Not all pumpkins are created equal. Smaller pumpkins are often delicious and are reminiscent of other winter squash. It's the larger jack-o'-lantern type of pumpkins that give all the other pumpkins a bad reputation, at least in terms of texture and flavor.

So I decided to do something about it. I decided to take some pumpkins, stuff them full of other things, and then roast them.

It's not an idea I had by myself. In 2010, the highly regarded food writer Dorie Greenspan included a recipe for stuffed pumpkin in her cookbook "Around My French Table," and they have been a popular dish since then.

So I started with Greenspan's groundbreaking recipe -- though the idea was not original with her, either; people have been stuffing pumpkins for decades.

As with three of the recipes I made, I used pie pumpkins for this dish. Pie or sugar pumpkins, which are always labeled such, have the best flavor of all pumpkins. They are sweet, but only a little, and the mild sweetness merely adds a hint of intrigue to a savory dish.

Each of the recipes uses a starch to help fill out the pumpkin. In Greenspan's inelegantly named Pumpkin Stuffed With Everything Good, the starch is stale bread. It is used as the foundation for layers of other flavors: cheese, garlic, bacon or sausage -- optional, if you want to keep it vegetarian -- scallions, thyme, cream and a touch of nutmeg.

Those ingredients are satisfying enough as they are, but don't forget the additional taste of pumpkin. A chunk of pumpkin in every bite makes a good meal better.

Next, I roasted a pumpkin stuffed with shepherd's pie. That's really all you need to know: It's shepherd's pie inside a roasted pumpkin. If you kind of squint your taste buds, it is somewhat like eating moussaka, with pumpkin replacing the eggplant. And while pumpkin tastes nothing at all like eggplant, it also kind of does.

I used ground beef for my shepherd's pie, but ground lamb, I imagine, would be just as good.

The next dish I made uses a large pumpkin -- or at least large for a pie pumpkin -- five or six pounds. It's good for a substantial meal, which is why it's called Stuffed Pumpkin Dinner. People who are tired of turkey have been known to make it for Thanksgiving.

The starch this time is rice (in the shepherd's pie recipe, it is mashed potatoes). The rice is mixed with ground beef, onions, green pepper and tomato sauce, so basically it is a chopped-up stuffed pepper stuffed into a pumpkin, with a few twists.

My favorite of the four stuffed-pumpkin dishes did not use pie pumpkins; it used mini pumpkins, which are just a couple of inches tall.

These are stuffed with baby kale, breadcrumbs (that's the starch), cheese, scallions, garlic, pine nuts and more, all moistened (or more) with heavy cream. The small pumpkins are wonderfully tender when cooked, and a little sweet. Or at least they aren't bitter.

Whatever. They taste wonderful, a little bit nutty, with the unbeatable combination of kale (or spinach, if you prefer), cheese and cream. The pine nuts add a toasty crunch.

Most people use mini pumpkins for decoration. But if you stuff a few and roast them, you'll have a side dish worth celebrating at the most celebratory time of the year.

Pumpkin Stuffed with Everything Good

1/4 pound cheese, such as Gruyère, Emmenthaler, cheddar, or a combination, cut into 1/2-inch chunks

1. Center a rack in the oven and preheat to 350 degrees. Line a baking sheet with a silicone baking mat or parchment.

3. Toss the bread, cheese, garlic, bacon, chives (or scallions) and thyme together in a bowl. Season with pepper (add salt, if you are not using the bacon) and pack the mix into the pumpkin. The pumpkin should be well filled; you may have too much mix, or too little. Stir the cream with the nutmeg and some salt and pepper and pour it into the pumpkin.

4. Put the cap in place and bake the pumpkin for about 2 hours -- check after 90 minutes -- or until everything inside the pumpkin is bubbling and the flesh of the pumpkin is tender enough to be pierced easily with the tip of a knife. Remove the cap during the last 20 minutes or so, so that the liquid can bake away and the top of the stuffing can brown a little.

5. When the pumpkin is ready, bring it to the table with care -- it's heavy, hot and wobbly.

Slightly adapted from a recipe in "Around My French Table," by Dorie Greenspan

2. Cover potatoes with water in a large saucepan. Bring to a boil, then reduce to a simmer and cook until tender, about 15 minutes.

3. Cut top of pumpkin to create a lid, as you would with jack-o'-lanterns. Clean out seeds with a spoon, scraping the insides down to the pulp. Set aside.

4. While potatoes are cooking, brown meat in large pan over medium heat, breaking meat up with a spoon, until meat is cooked through, 3 to 5 minutes. Remove from heat and drain, reserving 2 tablespoons fat.

5. Add reserved fat back to pan, and heat on medium. Add onion, mushroom (if using) and 1/4 teaspoon salt, and sauté until softened, about 5 minutes. Stir in flour and tomato paste and cook, stirring, until flour is incorporated, about 1 minute.

6. Whisk in broth, thyme and Worcestershire sauce into onion mixture, scraping pan as you go, and bring to a simmer. Return meat to pan and cook over medium-low heat until sauce is thickened, about 6 to 8 minutes. Test for flavor and add salt and pepper to taste. Add peas and carrots into mixture, if using.

7. Drain potatoes, return to hot pot and mash until smooth. Stir in butter, then half-and-half. Season with salt and pepper to taste.

8. Rub the inside of the pumpkins with salt. Fill pumpkins 2/3 full with meat mixture. Fill pumpkins to bottom of opening with mashed potatoes. Replace tops of pumpkins. Place pumpkins on prepared baking sheet.

9. Bake in oven for approximately 90 minutes or until pumpkin "gives" when you squeeze the sides. It may take longer than 90 minutes depending on the size of the pumpkin.

10. If you would like to brown the mashed potatoes, broil them for 3 to 5 minutes with the pumpkin lid removed.

1. Preheat oven to 350 degrees. Wash pumpkin and cut out a 6-inch lid, as you would with a jack-o'-lantern. Discard seeds and loose fibers from inside. Place pumpkin in a large Dutch oven. Fill Dutch oven with boiling water to a depth of 6 inches; add 1/2 teaspoon salt. Cover and simmer for 30 minutes or until the pumpkin is almost tender but holds its shape. Carefully remove and drain well; pat dry.

Recipe from Taste of Home

1/4 teaspoon salt, plus more for the shells

1/8 teaspoon black pepper, plus more for the shells

1. Preheat oven to 350 degrees. Wash the pumpkins. With a small, sharp knife, remove the tops as if for a jack-o'-lantern. Scoop out the seeds and stringy insides with a spoon, leaving the flesh intact. Rinse, then rub with a pinch of salt and a few grinds of pepper.

2. Melt the butter in a sauté pan over medium heat, add the scallions and cook for a few minutes. Add the garlic and sauté another minute or so, until fragrant. Add the kale and cook until it just wilts, about 3 or 4 minutes. Remove from heat, stir in the lemon juice and transfer to a bowl.

4. Divide the filling into the pumpkins and replace the tops. Line a baking dish with parchment paper (or brush with 1 tablespoon olive oil) and arrange the filled pumpkins in the dish.

5. Bake for 1 hour, watching to make sure the tops don't brown too much. Test the pumpkins by piercing with a fork. If the skin doesn't pierce easily, remove the tops and bake an additional 15 to 20 minutes. Replace the tops and serve hot. 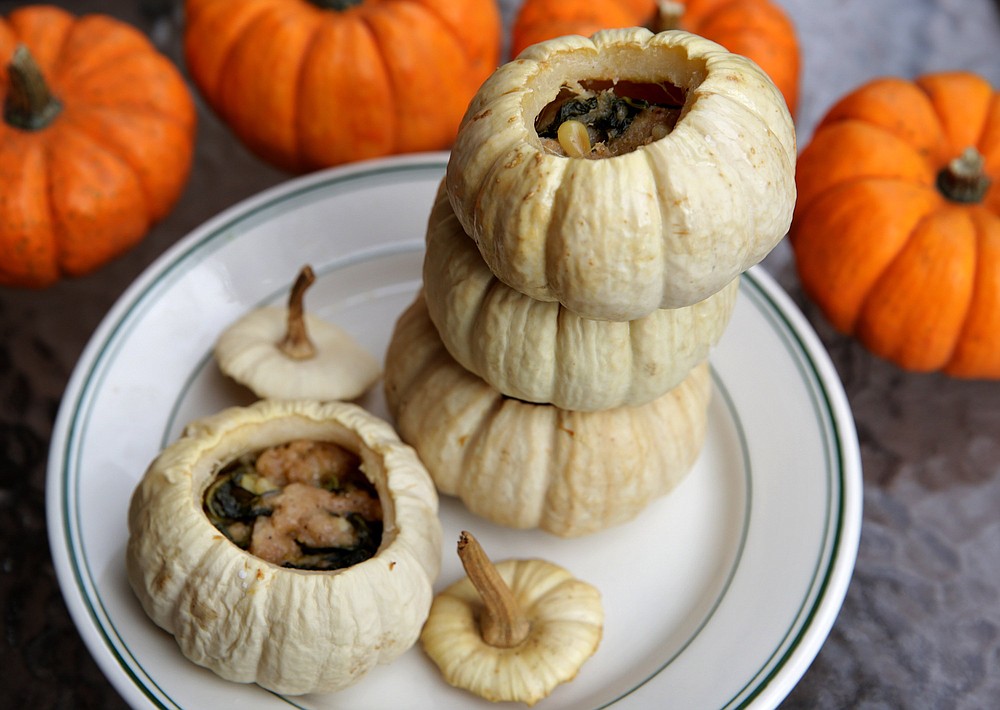 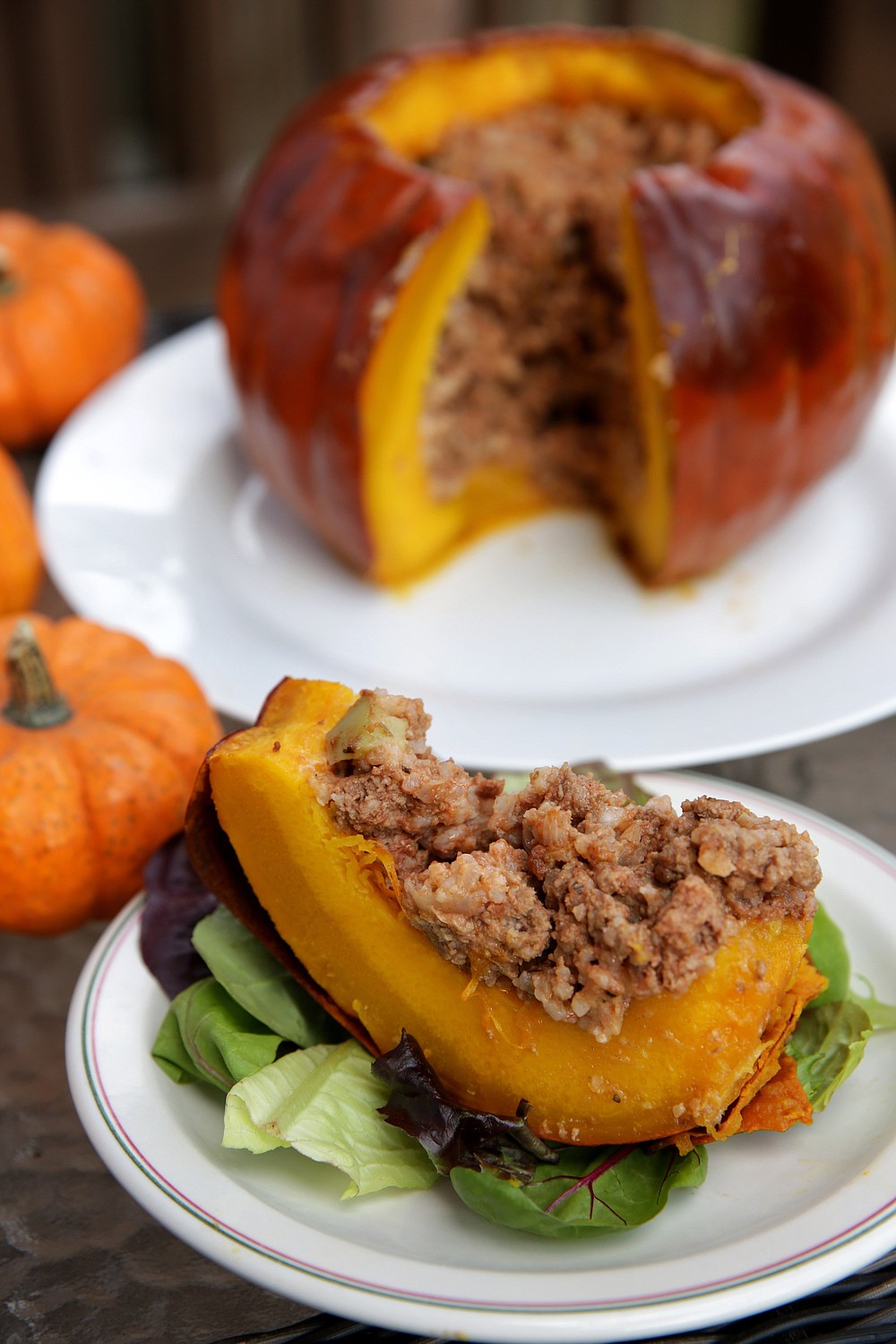 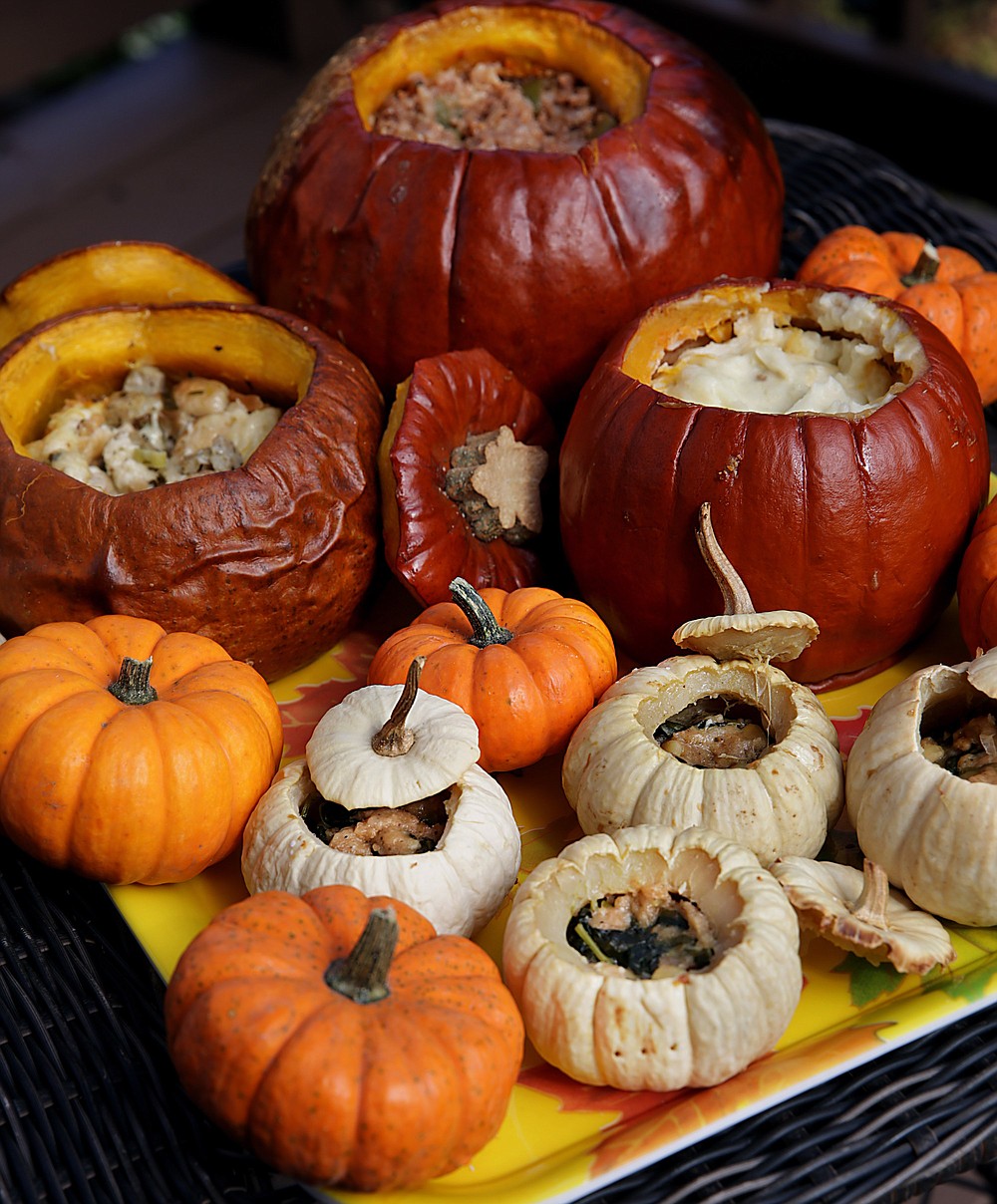 Print Headline: Turn a good pumpkin into a Great Pumpkin with these 4 recipes