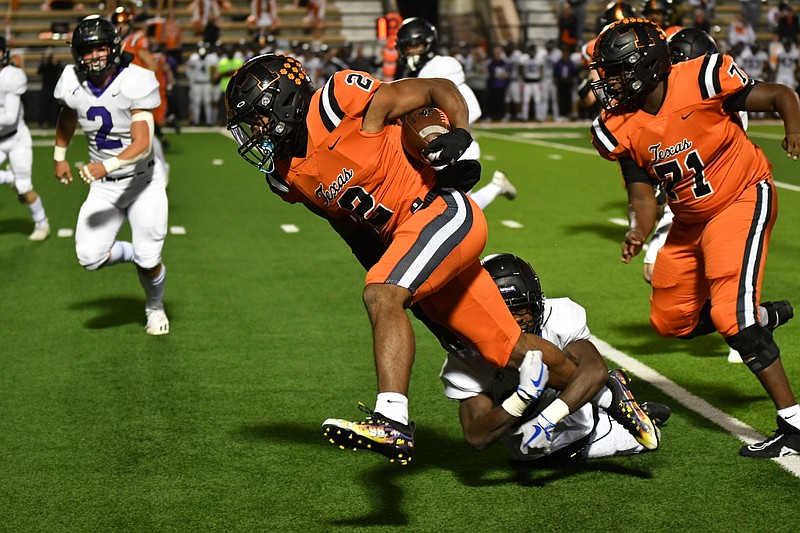 Braylon Stewart rushed for 306 yards and four touchdowns, the Tiger defense faced 82 snaps by the Chargers, and the seventh-ranked Tigers came alive late to claim a 42-14 victory Thursday at Tiger Stadium in Grim Park.

Stewart finished with a workhorse 27 carries to eclipse the 300-yard mark on the night.

Brayson McHenry completed 4-of-12 passes for 54 yards and an interception, and he also ran for a score. Trent Kelly added a late score for Texas High, which finished with 400 yards of total offense to improve to 10-0.

Tyjae Williams scored on an 8-yard run for the Chargers, and Parker Williams threw a 2-point conversion to Jax Medica with 6:17 left in the third to knot the score at 14.

The Tigers answered with back-to-back-to-back scoring drives to put the game away.

At 5:07, McHenry sneaked in from the 1 to cap a 6-play, 63-yard campaign, and Stewart raced 51 yards, shedding several tacklers en route to the end zone with 1:27 to play in the third.

With 18 ticks left in the third, Stewart added his fourth TD with a 34-yard scamper after Tiger linebacker Keyvuntae Featherson picked off a Charger pass at the 33 and returned it 10 yards to set up a short field.

Kelly bulled his way in from the 3 with 2:41 remaining to play.

Stewart ran for a pair of first-quarter touchdowns, and Fulshear managed only one first down and 40 yards of total offense in the opening period. With the Chargers punting three times, Texas High rolled up 164 yards in the first.

On THS' third possession, Stewart raced 43 yards to cap a 6-play, 68-yard drive with 55 seconds left in the first.

The ensuing Tiger drive ended quickly on a lost fumble, recovered by Charger linebacker Luke Guzzetta at the Texas HIgh 47. Fulshear marched into the red zone before turning the ball over on downs at the Tiger 11.

The Chargers forced a 3-and-out and then drove inside the 20 before a fourth-down pass fell short once again. After another Tiger punt, Parker Williams connected with Tate Struble for a 24-yard strike with 2:09 left in the half.

The Tigers turned the ball over on an interception by Joshua Stewart, who brought back the pick 33 yards to the THS 27. A Charger field goal attempt was short from 33 yards out.

Texas High had 200 yards of total offense and a 14-6 lead at intermission, and Fulshear managed 164 yards before halftime.