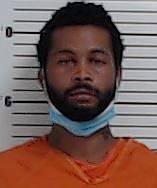 TEXARKANA, Ark. -- Bail has been set at $100,000 for a Houston, Texas, man accused of fleeing in an Arkansas State Police cruiser during an arrest here last week.

Jabaurri Amaruu Duray Martin, 23, was allegedly driving 79 miles per hour in a 55 mile per hour zone in a red 2006 Chevrolet truck when he was pulled over on U.S. Highway 67 near the Texarkana Speedway racetrack by Arkansas State Police Sgt. Ryne Shelton, according to a probable cause affidavit.

Shelton determined the pickup Martin was driving had been reported stolen in Pflugerville, Texas (just north of Austin), the day before and placed Martin in the rear of his patrol unit, a 2020 Chevrolet Tahoe, with his hands cuffed behind his back. While Shelton was conducting an inventory of the allegedly stolen truck, Shelton heard "tires squealing and looked up to see Martin driving away in his patrol unit," the affidavit states.

"As Martin was pulling away, Sgt. Shelton pulled his duty sidearm and fired 15 shots at his unit," the affidavit states.

Shelton then jumped in the stolen red Chevrolet truck and attempted to follow Martin.

"Approximately 200 yards or so down the roadway, the vehicle Sgt. Shelton was driving ran out of fuel," the affidavit states.

Shortly after Shelton ran out of gas in the red truck, Martin ran out of road in the police Tahoe.

"This was at a dead end road at a cow pasture," the affidavit states.

Martin allegedly fled on foot but was apprehended after other Troop G units arrived and conducted a manhunt.

Martin is currently being held in the Miller County jail. He is charged with theft by receiving, theft of property and third-degree escape.