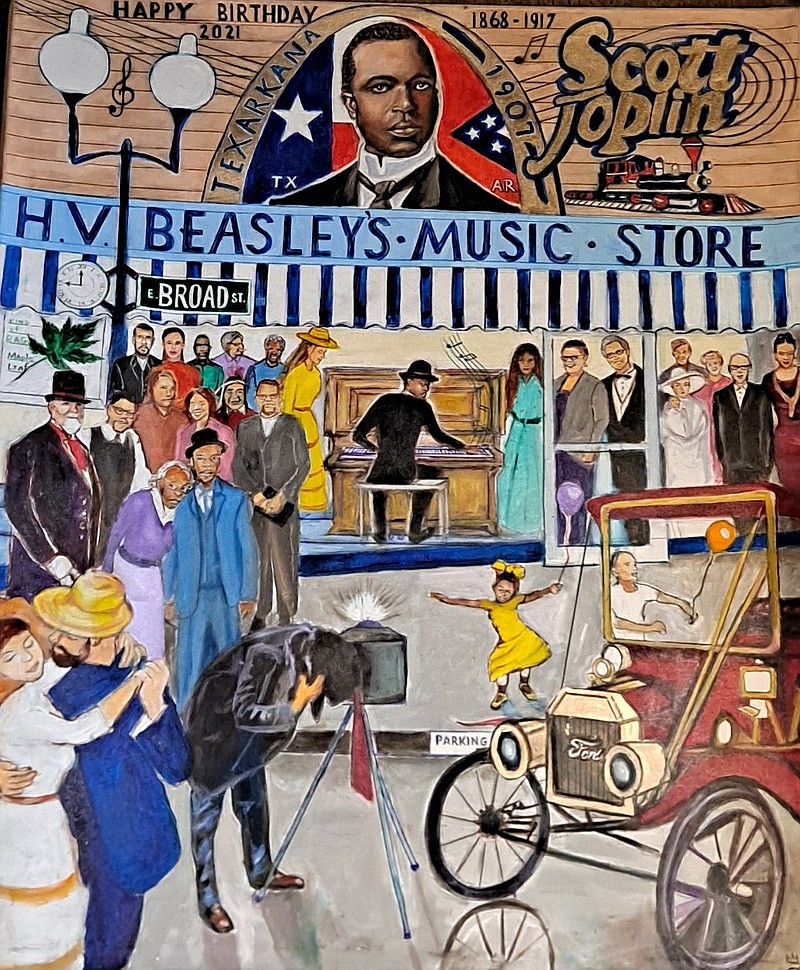 This Henry Fort oil and acrylics on canvas (40- by 48-inch) painting, “Scott Joplin at Beasley’s Music Store — Texarkana 1907,” will be auctioned today as part of a celebration of the composer Scott Joplin's birthday. Bids may also be placed on the auction sheet by texting to 903-490-547, up to the end of the silent auction. The event — with jazz and cocktails in the spotlight — will take place at the recently opened 1923 Banana Club downtown. Admission donations will benefit a downtown decoration project dubbed “Music in the Air.” (Submitted photo)

TEXARKANA, Ark. -- An auction of an aptly themed painting will be part of today's Scott Joplin celebration.

It is a Henry Fort oil and acrylics on canvas (40- by 48-inch) painting, "Scott Joplin at Beasley's Music Store -- Texarkana 1907." Fort mixed eras with a few recognizable faces in the crowd, including Mrs. LaErma White, grand niece of our "Father of Ragtime," standing with family friend Reginald R. Robinson, renowned ragtime pianist and MacArthur Genius Award winner immediately after his performance at Perot Theatre during the Scott Joplin Centennial Celebrations in 2017.

A starting bid of $300 has already been accepted from a local music teacher, according to one of the organizers on Friday.

The auction is part this year's annual celebration of the ragtime composer's birthday.

The event -- with jazz and cocktails in the spotlight -- will take place at the recently opened 1923 Banana Club downtown. Admission donations will benefit a downtown decoration project dubbed "Music in the Air."

A cash bar will feature a new cocktail, the peacherine, named after one of Joplin's songs, and Verona restaurant will supply hors d'oeuvres and a signature wine named Texarkana Notes. The best 1920s speakeasy costume will win a door prize.

Attendees can participate in a silent auction for bottles of the wine, two round-trip Amtrak tickets to San Antonio and this year's Joplin birthday painting by Fort.

"Music in the Air" is a planned "skyscape" of music-themed, lit sculptures that will adorn the tops of downtown buildings. The project is sponsored by the Scott Joplin Support Group and Main Street Texarkana.

Joplin, a Texarkana native, was born around Nov. 24, 1868, and died in 1917. Joplin pioneered the ragtime musical form popular around the turn of the 20th century.

(Scott Joplin's Jazzy Birthday Cocktails begins at 6:30 p.m. at the 1923 Banana Club, 223 Front St. in the basement of the 1894 Gallery and Market. Any donation at the door gets admission and one free drink ticket. Donations of $50 or more are tax deductible. For more information or to reserve a table, contact 903-490-5471 or [email protected])