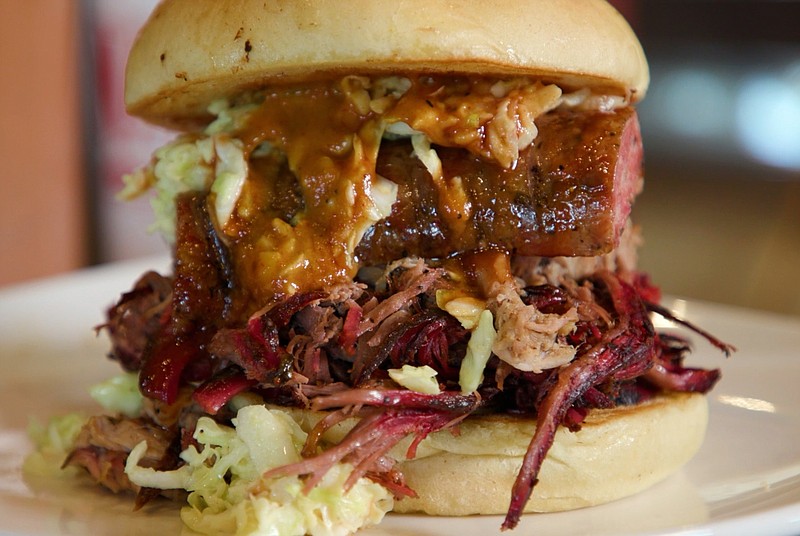 A grilling champion and local favorite, Naaman’s Championship BBQ piles it on. The eatery’s Red Headed Stepchild sandwich will be featured on the upcoming episode of The Texas Bucket List, which airs at 1:30 a.m. Monday on KSLA Channel 12. (Submitted photo)

Naaman's sizable sandwich, the "Red Headed Stepchild," will get its due in the The Texas Bucket list episode airing at 1:30 a.m. Monday.

This monstrous sandwich has three quarters of a pound of meat topped with coleslaw and two sauces.

The Red Headed Stepchild is a favorite because it is piled high with good stuff.

Naaman's owner Darby Neaves is proud of his restaurant, which is named after a family member.

"The brand means more to me than money. It's my son's name. He was 3 when I started competitions. I had no idea that it would ever turn into something like this. That's not my name to ruin. I want that name to mean something. Quality," Neaves said.

Monday's episode will feature host Shane McAuliffe's visit to Texarkana to grab a bite of the sandwich.

Each week McAuliffe sets out to add more people, places, food and music to his "bucket list" that he says every Texan should experience.

It's not the show's first visit to Texarkana as The Bucket List came to the Wake Village Dairy Queen in June.

Print Headline: Naaman's BBQ in Texarkana to be featured Monday on The Texas Bucket List