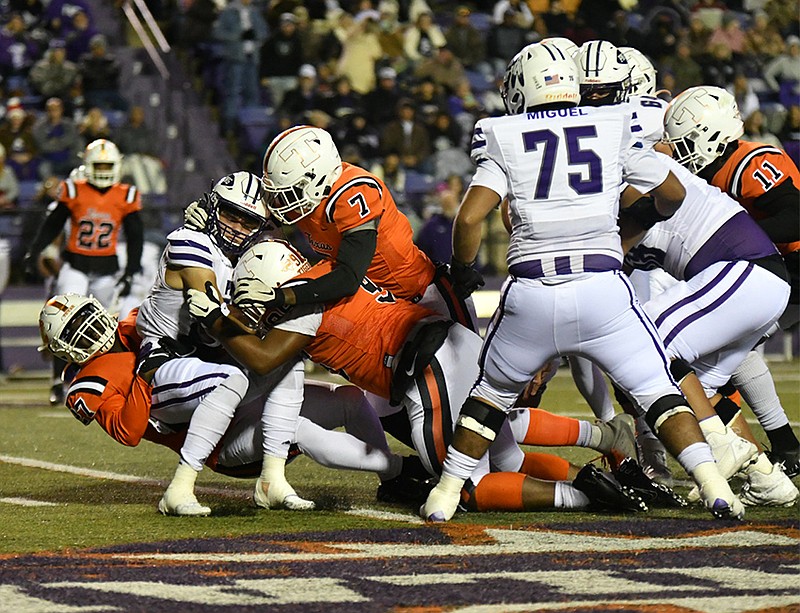 A trio of Texas High Tigers work together to bring down a Port Neches-Grove ball carrier during a Class 5A, Division II regional semifinal Friday, Nov. 26, 2021, at Harry Turpin Stadium on the campus of Northwestern State University in Natchitoches, La. (Photo by Kevin Sutton)

The 6th-ranked Tigers bottled up Port Neches-Groves' high-flying offense, rolled up over 400 yards of total offense and eliminated the Indians with a 44-21 victory, which featured a pair of meaningless late scores by PNG, in the third-round game Friday at Harry Turpin Stadium.

"We played like a third-round playoff team tonight, and we came in with the ambition to be in the fourth round," Tiger head coach Gerry Stanford said. "That's how we started of the game, from the first play of each half, that's how it went."

Braylon Stewart rushed 14 times for 190 yards and three touchdowns -- shooting on the first Texas High play of each half -- and QB Brayson McHenry connected on 13-of-20 passes for 143 yards, a touchdown and no interceptions.

Michael Thomas and Darrin Finley each had an interception for THS' defense, which limited PNG to 258 yards of total offense -- 90 coming on a late drive for the final tally.

The Tigers (12-0) advance to the regional final/state quarterfinal round to play No. 10 Crosby (11-2) next week. Crosby outlasted A&M Consolidated (College Station), 53-50, Friday.

On the first snap of the second half Stewart ran 34 yards to score his third TD of the game. The score, just seven seconds into the third quarter, came after a failed onsides-kick try by Port Neches-Groves.

The Tigers drove 54 yards on 10 plays on their next possession, and Austin Miller booted a 32-yard field goal with 6:03 left in the third. After Thomas' interception, McHenry and Cody Reese hooked up for a 22-yard scoring reception with 4:03 on the clock to go up 44-7.

The Indians came back with a 14-play, 75-yard scoring drive, Chance Prosperie catching a 10-yard TD with 11:19 remaining. THS missed a field goal, and PNG drove 90 yards on seven plays with Prosperie hauling in a 38-yard strike from Cole Crippen with 2:58 left.

The Indians had three incomplete passes on their opening drive, and Stewart raced 54 yards to paydirt in Texas High's first snap of the game.

Three plays into Port Neches-Groves' second possession, linebacker Finley intercepted a pass and raced for a pick-6 from the 38. The Miller PAT made it 13-0 just 1:48 into the game.

Following a trio of punts, the Tigers extended their lead with a 4-play, 58-yard drive. Stewart eclipsed 100 yards in the first quarter with his 48-yard touchdown run with 23 seconds left in the first.

Two more punts were exchanged, and Javarous Tyson dropped the Indian running back for a 10-yard loss on a fourth-down attempt. Four plays later, McHenry kept around the left side for a 4-yard score with 6:52 left before intermission.

"The kids did a tremendous job of executing, following the plan and putting it into action," Stanford said. "It's anybody's game right now, this deep in the playoffs."

PNG finally got on the scoreboard on Shea Adams' 2-yard run with 37 ticks left in the first half. The touchdown capped an 8-play, 58-yard drive.