Britain tightens COVID rules as world on alert over omicron 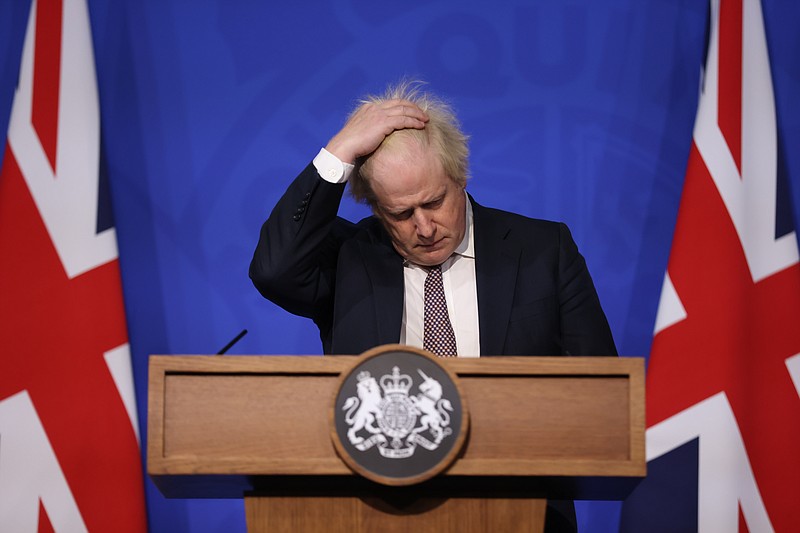 Britain's Prime Minister Boris Johnson speaks during a press conference in London, Saturday Nov. 27, 2021, after cases of the new COVID-19 variant were confirmed in the UK. (Hollie Adams/Pool via AP)

LONDON -- The U.K. tightened up rules Saturday on mask-wearing and on testing of international arrivals after finding two cases of the new potentially more contagious omicron variant of the coronavirus as governments around the world sought to shore up their defenses.

Amid fears that the recently identified new variant has the potential to be more resistant to the protection offered by vaccines, there are growing concerns that the pandemic and associated lockdown restrictions will persist for far longer than hoped.

Prime Minister Boris Johnson said it was necessary to take "targeted and precautionary measures" after two people tested positive for the new variant in England, and that these will be reviewed in three weeks when scientists will know more about omicron.

Johnson told a news conference that anyone arriving in England will be asked to take a a mandatory PCR test for COVID-19 on the second day and must self isolate until they provide a negative test. And if someone tests positive for the omicron variant, then he said their close contacts will have to self-isolate for 10 days regardless of their vaccination status.

He also said mask-wearing in shops and on public transport will be required and that the vaccination program will be accelerated, without providing specific details.

"Right now this is the responsible course of action to slow down the seeding and the spread of this new variant and to maximize our defenses," he said. "From today we're going to boost the booster campaign."

One of the two new cases was found in the southeastern English town of Brentwood, while the other is in the central city of Nottingham. The two cases are linked and involve travel from southern Africa. The two confirmed cases are self-isolating alongside their households while contact tracing and targeted testing takes place.

The British government also added four more countries -- Angola, Malawi, Mozambique and Zambia -- onto the country's travel red list from Sunday. Six others -- Botswana, Eswatini (formerly known as Swaziland), Lesotho, Namibia, South Africa and Zimbabwe -- were added Friday. That means anyone permitted to arrive from those destinations will have to quarantine.

Many countries have slapped restrictions on various southern African countries over the past couple of days including Australia, Brazil, Canada, the European Union, Iran, Japan, Thailand and the United States, in response to warnings over the transmissability of the new variant -- against the advice of the World Health Organization.

Despite the banning of flights, there are mounting concerns that the variant has already been widely seeded around the world. In addition to the U.K, cases have been reported in travelers in Belgium, Israel and Hong Kong. Germany also said it suspected a positive case and Dutch authorities were testing whether 61 people who arrived on two flights from South Africa with COVID-19 have the omicron variant.

The planes arrived in the Netherlands from Johannesburg and Cape Town shortly after the Dutch government imposed a ban on flights from southern African nations. The 539 travelers who tested negative were allowed to return home or continue their journeys to other countries. Under government regulations, those who live in the Netherlands and are allowed to return home must self-isolate for at least five days.

Meanwhile, a German official said that there's a "very high probability" that the omicron variant has already arrived in the country.

Kai Klose, the health minister for Hesse state, which includes Frankfurt, said in a tweet that "several mutations typical of omicron" were found Friday night in a traveler returning from South Africa, who was isolated at home. Sequencing of the test had yet to be completed.

Italian authorities in the southern region of Campania were also investigating whether a person who recently returned home from southern Africa and who has tested positive for the virus was infected with the omicron variant.

The global health body has named the new variant omicron, labeling it a variant of concern because of its high number of mutations and some early evidence that it carries a higher degree of infection than other variants. That means people who contracted COVID-19 and recovered could be subject to catching it again. It could take weeks to know if current vaccines are less effective against it.

With so much uncertainty about the omicron variant and scientists unlikely to flesh out their findings for a few weeks, countries around the world have been taking a safety-first approach, in the knowledge that previous outbreaks of the pandemic have been partly fueled by lax border policies.

Nearly two years on since the start of the pandemic that has claimed more than 5 million lives around the world, countries are on high alert.

The variant's swift spread among young people in South Africa has alarmed health professionals even though there was no immediate indication whether the variant causes more severe disease.

A number of pharmaceutical firms, including AstraZeneca, Moderna, Novavax and Pfizer, said they have plans in place to adapt their vaccines in light of the emergence of omicron. Pfizer and its partner BioNTech said they expect to be able to tweak their vaccine in around 100 days.

Professor Andrew Pollard, the director of the Oxford Vaccine Group which developed the AstraZeneca vaccine, expressed cautious optimism that existing vaccines could be effective at preventing serious disease from the omicron variant.

He said most of the mutations appear to be in similar regions as those in other variants.

"At least from a speculative point of view we have some optimism that the vaccine should still work against a new variant for serious disease but really we need to wait several weeks to have that confirmed," he told BBC radio.

He added that it is "extremely unlikely that a reboot of a pandemic in a vaccinated population like we saw last year is going to happen."

Some experts said the variant's emergence illustrated how rich countries' hoarding of vaccines threatens to prolong the pandemic.

Fewer than 6% of people in Africa have been fully immunized against COVID-19, and millions of health workers and vulnerable populations have yet to receive a single dose. Those conditions can speed up spread of the virus, offering more opportunities for it to evolve into a dangerous variant.

"One of the key factors to emergence of variants may well be low vaccination rates in parts of the world, and the WHO warning that none of us is safe until all of us are safe and should be heeded," said Peter Openshaw, a professor of experimental medicine at Imperial College London. 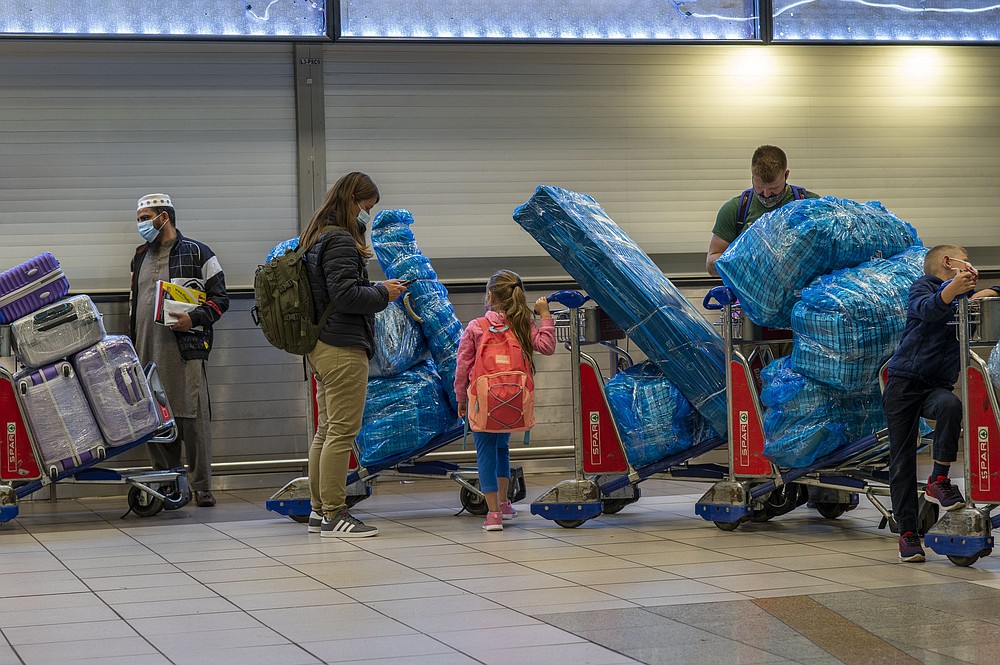 FILE - People line up to get on an overseas flight at OR Tambo International Airport in Johannesburg, South Africa, Nov. 26, 2021. As the world grapples with the emergence of the new highly transmissible variant of COVID-19, worried scientists in South Africa &amp;#x2014; where omicron was first identified &amp;#x2014; are scrambling to combat its lightning spread across the country. (AP Photo/Jerome Delay, File) 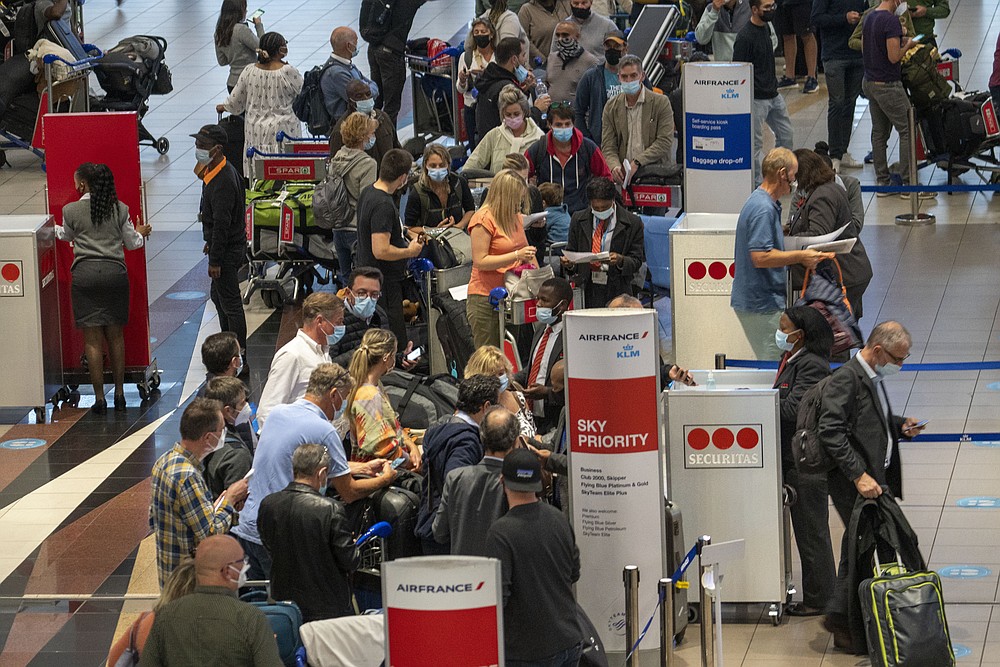 FILE - People queue to get on the Air France flight to Paris at OR Tambo&#x27;s airport in Johannesburg, South Africa, Nov. 26, 2021. As the world grapples with the emergence of the new highly transmissible variant of COVID-19, worried scientists in South Africa &amp;#x2014; where omicron was first identified &amp;#x2014; are scrambling to combat its lightning spread across the country. (AP Photo/Jerome Delay, File) 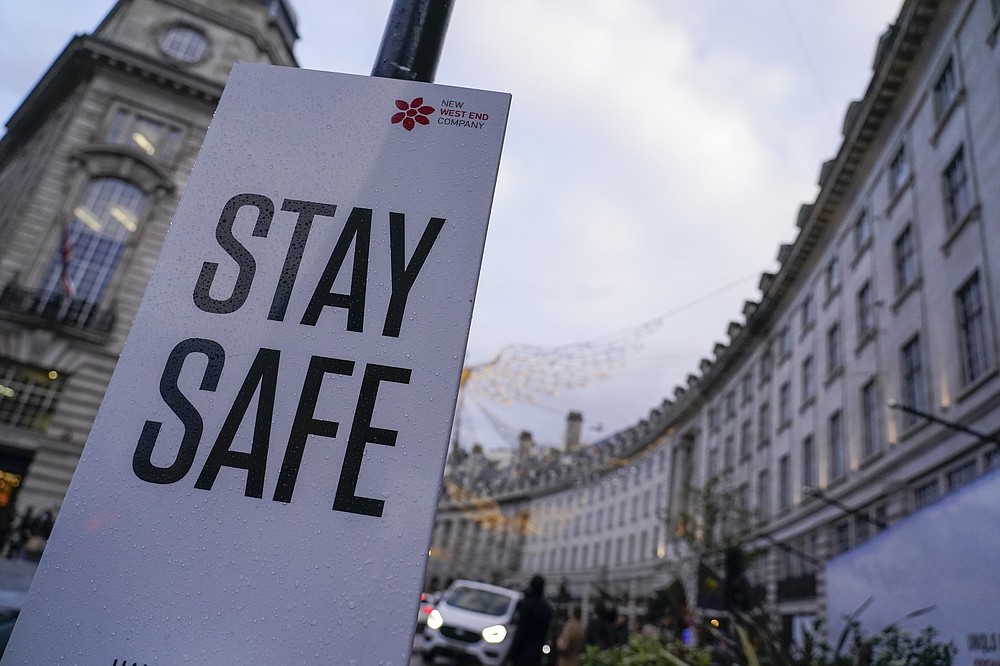 A sign reading &#x27;Stay safe&#x27; in Regent Street, in London, Friday, Nov. 26, 2021. A slew of nations moved to stop air travel from southern Africa on Friday, and stocks plunged in Asia and Europe in reaction to news of a new, potentially more transmissible COVID-19 variant. (AP Photo/Alberto Pezzali) 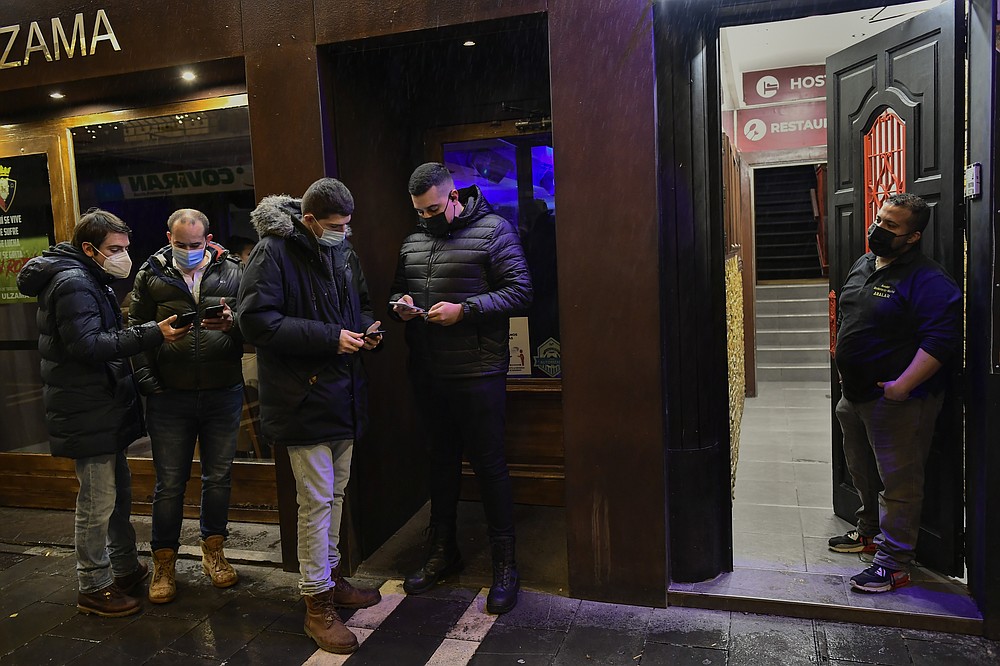 A doorman controls European passport COVID-19 to customers before the access of a bar discotheque, in Pamplona, northern Spain. Saturday, Nov. 27, 2021. Some Spanish regional communities demand from this midnight European passport COVID-19, Navarra Community one of them, in an effort to try to control the pandemic with a high curve of cases. (AP Photo/Alvaro Barrientos) 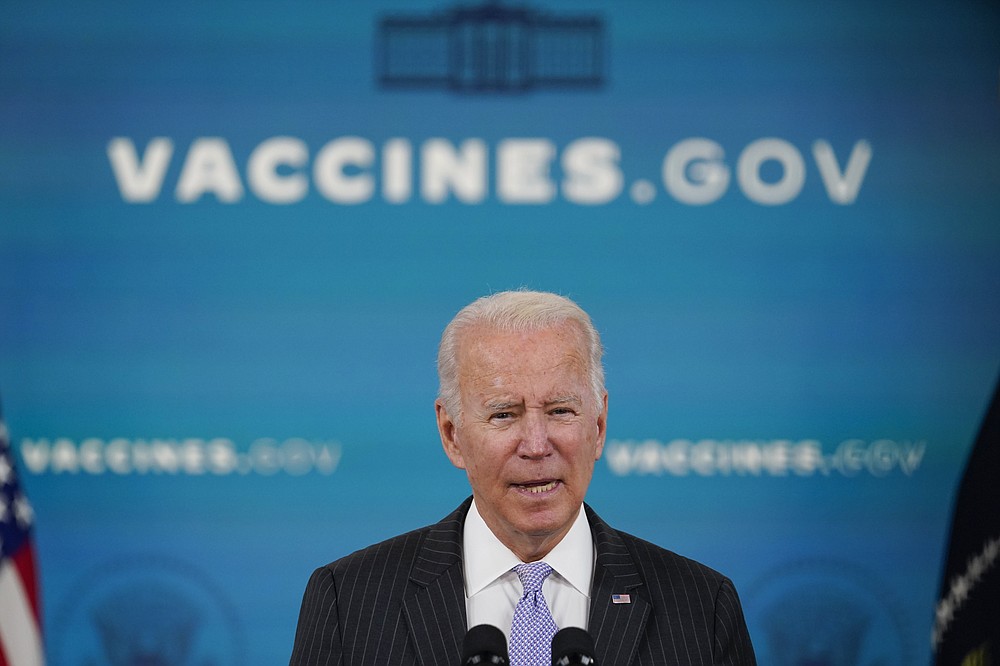 FILE - President Joe Biden talks about the newly approved COVID-19 vaccine for children ages 5-11 from the South Court Auditorium on the White House complex in Washington, Nov. 3, 2021. Biden&amp;#x2019;s team views the pandemic as the root cause of both the nation&amp;#x2019;s malaise and his own political woes. It sees getting more people vaccinated and finally controlling COVID-19 as the key to reviving the country and Biden&amp;#x2019;s own standing. But the coronavirus has proved to be a vexing challenge for the White House. (AP Photo/Susan Walsh, File) 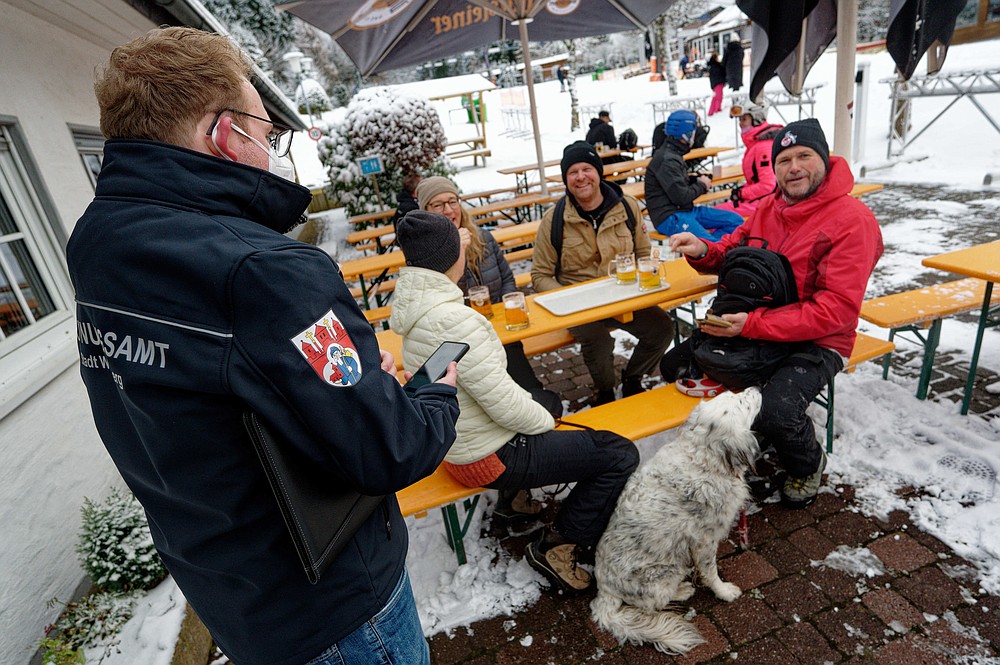 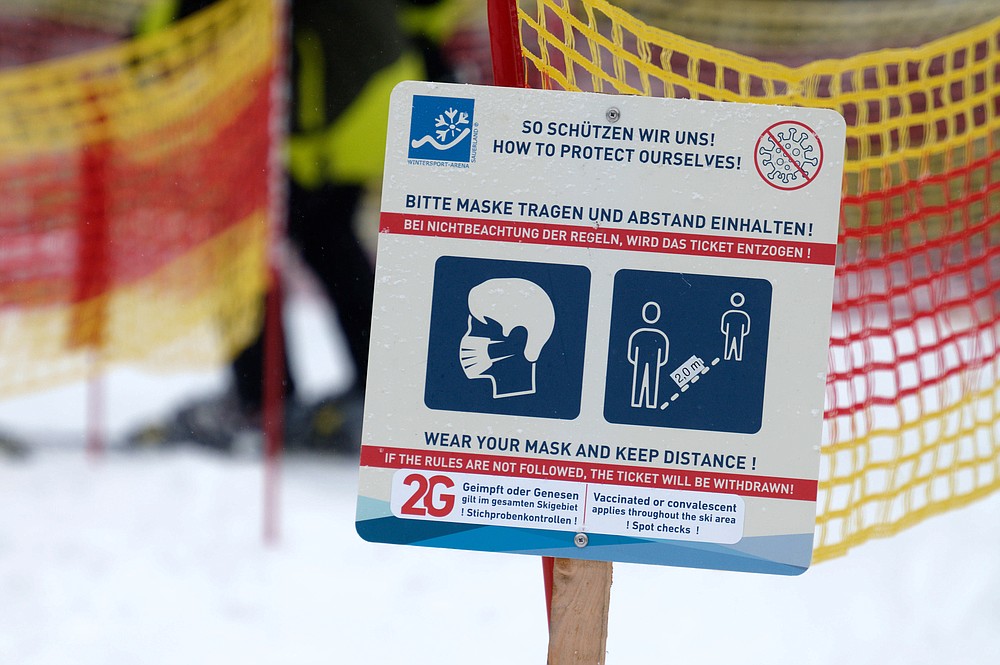