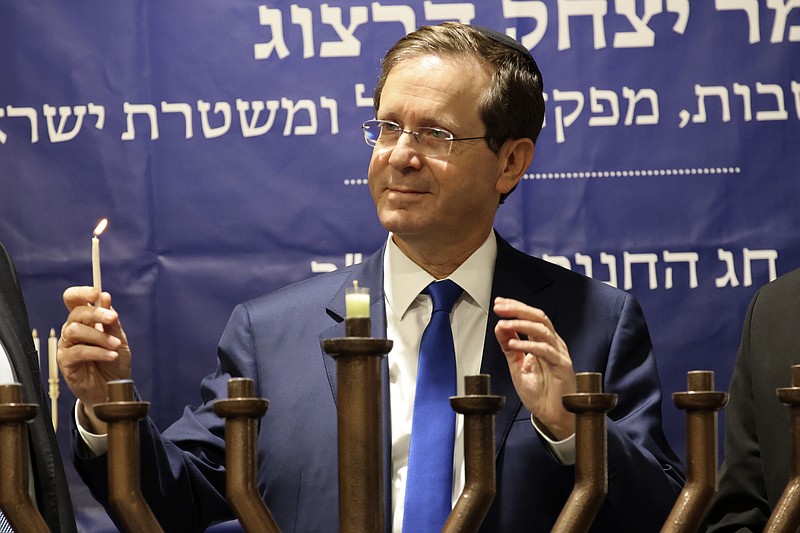 Israeli President Isaac Herzog lights candles during the Jewish holiday of Hanukkah in Hebron's holiest site, known to Jews as the Tomb of the Patriarchs and to Muslims as the Ibrahimi Mosque in the Israeli controlled part of the West Bank city of Hebron, Sunday, Nov. 28, 2021, Sunday, Nov. 28, 2021. (AP Photo/Oren Ziv)

HEBRON, West Bank -- Israel's president on Sunday visited one of the most contentious spots in the occupied West Bank to celebrate the Jewish holiday of Hanukkah, sparking scuffles between Israeli security forces and protesters.

President Isaac Herzog said he was visiting the Cave of the Patriarchs in Hebron to celebrate the ancient city's Jewish past and promote interfaith relations. But his visit to the city, known for its tiny ultranationalist Jewish settler community and difficult living conditions for Palestinians, drew widespread criticism from Palestinians and left-wing Israelis.

About 1,000 Jewish settlers live in small enclaves guarded by Israeli soldiers in the city, surrounded by some 200,000 Palestinians who must cross through Israeli checkpoints to move from place to place.

There is frequent violence between the sides and the Cave of the Patriarchs, revered by Muslims and Jews, was the site of a massacre by a Jewish settler who killed 29 Muslim worshippers in 1994.

Herzog made no mention of the 1994 massacre but paid homage to the more than 60 Jews killed by Palestinians in Hebron during riots in 1929, noting that a relative had survived the fighting.

"I have no doubt that she would have been very moved by the fact that one of her descendants is lighting Hanukkah candles in the Cave of the Patriarchs as the president of the state of Israel," he said during a ceremony marking the first night of the eight-day holiday.

Recognition of the Jewish attachment to the city "must be beyond all controversy," he added.

In his speech, he made a brief call for "peace between all religions" and "to denounce all forms of hatred and violence."

But critics accused Herzog of embracing the most radical elements of Israeli society. Herzog is a former leader of Israel's Labor party, which supports a two-state solution with the Palestinians. And his current position is meant to be apolitical and to serve as a moral compass for the nation.

Several dozen Israeli protesters gathered about a kilometer (half a mile) away from the cave, screaming "shame" as Israeli police held some of them back. Journalists and protesters were not allowed near the holy site.

"Herzog doesn't have any shame," said Nurit Budinsky, an Israeli activist. "He came to celebrate with these Jews who took over the city and celebrate with them a holiday of freedom. Here in Hebron there is no freedom, there are people who live in unbearable occupation."

Breaking the Silence, a group of former Israeli combat soldiers who oppose Israel's West Bank occupation, accused Herzog of "giving an official seal of approval to this obscene reality and the people perpetuating it."

The Jewish residents of Hebron are among the most hard line of the roughly 700,000 Israeli settlers living in the West Bank and east Jerusalem.

Israel captured the West Bank, along with east Jerusalem and the Gaza Strip, in the 1967 Mideast war. The Palestinians claim all three areas for a future independent state. The international community overwhelmingly considers the settlements illegal. Israel withdrew from Gaza in 2005.

Aviya Glass, a resident of the neighboring settlement of Kiryat Arba, said the high-profile visit "shows us how good it is for people with such a status to come here to strengthen the settlement." 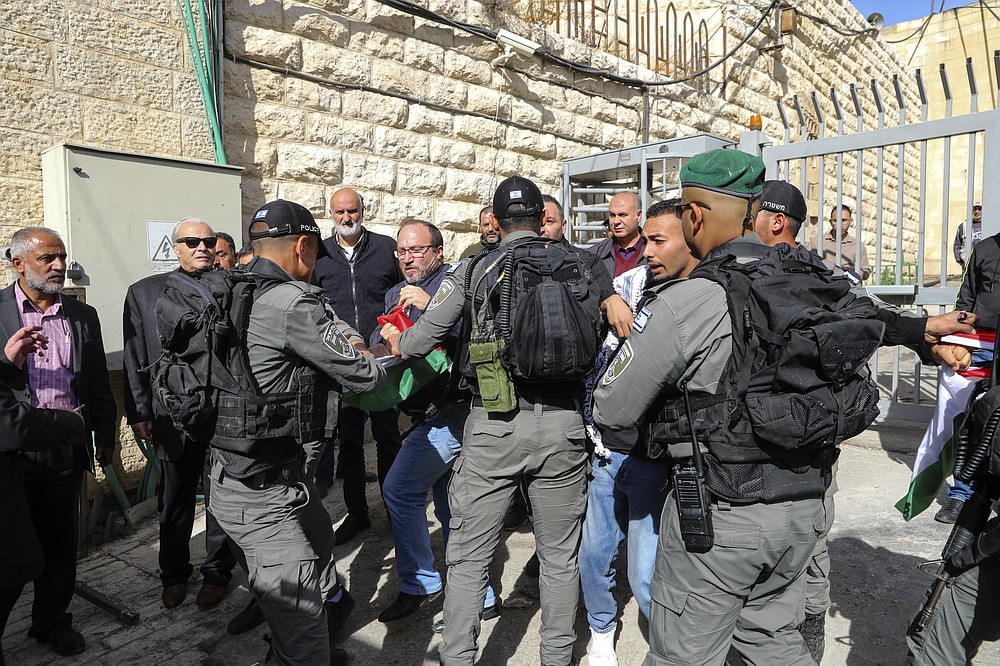 Palestinians scuffle with Israeli forces during a protest against the planned visit of Israeli President Isaac Herzog to Hebron&#x27;s holiest site, known to Jews as the Tomb of the Patriarchs and to Muslims as the Ibrahimi Mosque in the Israeli controlled part of the West Bank city of Hebron, Sunday, Nov. 28, 2021. (AP Photo/Mahmoud Illean) 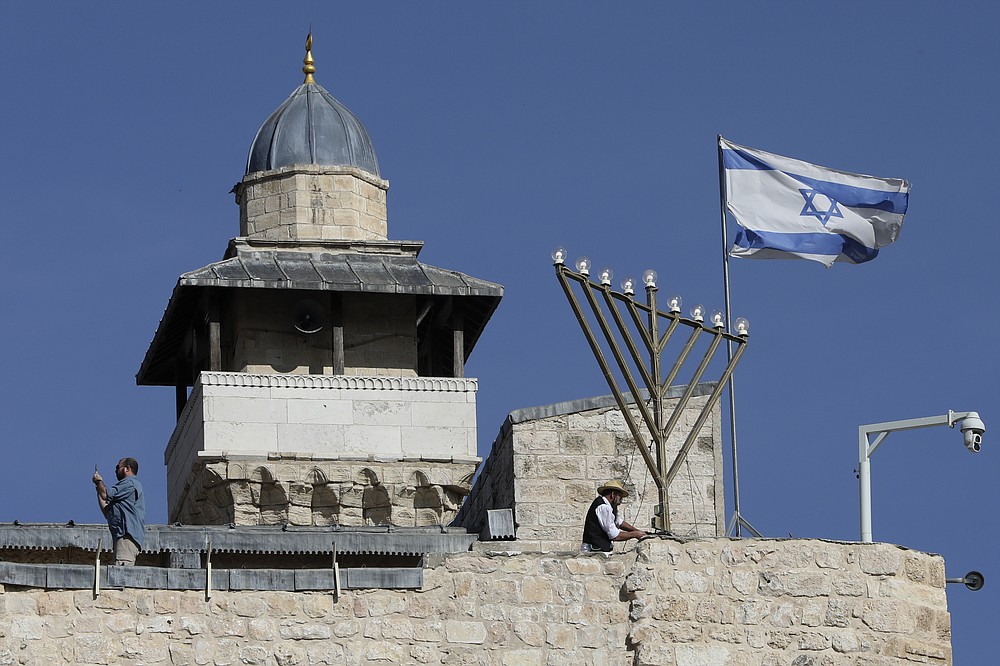 Israelis set up a large Hanukkah menorah ahead of the Jewish holiday of Hanukkah, at Hebron&#x27;s holiest site, known to Jews as the Tomb of the Patriarchs and to Muslims as the Ibrahimi Mosque in the Israeli controlled part of the West Bank city of Hebron, Sunday, Nov. 28, 2021. (AP Photo/Mahmoud Illean)