Brazil and Japan report first cases of the omicron variant 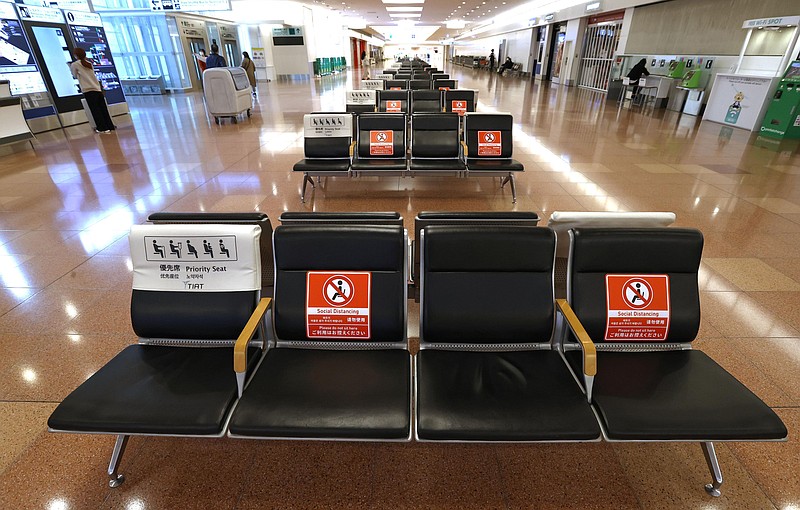 The arrival lobby of the international terminal is deserted at Haneda Airport in Tokyo, Japan, Tuesday, Nov. 30, 2021. Japan confirmed on Tuesday its first case of the new omicron coronavirus variant, a visitor who recently arrived from Namibia, an official said. Japan announced Monday it will suspend entry of all foreign visitors from around the world as a new coronavirus variant spreads (Shinji Kita/Kyodo News via AP)

Brazil and Japan joined the rapidly widening circle of countries to report cases of the omicron variant Tuesday, while new findings indicate the mutant coronavirus was already in Europe close to a week before South Africa sounded the alarm.

The Netherlands' RIVM health institute disclosed that patient samples dating from Nov. 19 and 23 were found to contain the variant. It was on Nov. 24 that South African authorities reported the existence of the highly mutated virus to the World Health Organization.

That indicates omicron had a bigger head start in the Netherlands than previously believed.

Together with the cases in Japan and Brazil, the finding illustrates the difficulty in containing the virus in an age of jet travel and economic globalization. And it left the world once again whipsawed between hopes of returning to normal and fears that the worst is yet to come.

Much remains unknown about the new variant, including whether it is more contagious, as some health authorities suspect, whether it makes people more seriously ill, and whether it can thwart the vaccine.

The pandemic has shown repeatedly that the virus "travels quickly because of our globalized, interconnected world," said Dr. Albert Ko, an infectious disease specialist at the Yale School of Public Health. Until the vaccination drive reaches every country, "we're going to be in this situation again and again."

Brazil, which has recorded a staggering total of more than 600,000 COVID-19 deaths, reported finding the variant in two travelers returning from South Africa -- the first known omicron cases in Latin America. The travelers were tested on Nov. 25, authorities said.

Japan announced its first case, too, on the same day the country put a ban on all foreign visitors into effect. The patient was identified as a Namibian diplomat who had recently arrived from his homeland.

France likewise recorded its first case, in the far-flung island territory of Reunion in the Indian Ocean. Authorities said the patient was a man who had returned to Reunion from South Africa and Mozambique on Nov. 20.

Dr. Anthony Fauci, the United States' top infectious disease expert, said much more will be known about omicron in the next several weeks, and "we'll have a much better picture of what the challenge is ahead of us."

In the meantime, a WHO official warned that given the growing number of omicron cases in South Africa and neighboring Botswana, parts of southern Africa could soon see infections skyrocket.

"There is a possibility that really we're going to be seeing a serious doubling or tripling of the cases as we move along or as the week unfolds," said Dr. Nicksy Gumede-Moeletsi, a WHO regional virologist.

Cases began to increase rapidly in mid-November in South Africa, which is now seeing nearly 3,000 confirmed new infections per day.

Before news of the Brazil cases broke, Fauci said 226 omicron cases had been confirmed in 20 countries, adding: "I think you're going to expect to see those numbers change rapidly."

Those countries include Britain, 11 European Union nations, Australia, Canada and Israel. American disease trackers said omicron could already be in the U.S., too, and probably will be detected soon.

"I am expecting it any day now," said Scott Becker of the Association of Public Health Laboratories. "We expect it is here."

While the variant was first identified by South African researchers, it is unclear where and when it originated, information that could help shed light on how fast it spreads.

The announcement from the Dutch on Tuesday could shape that timeline.

Previously, the Netherlands said it found the variant among passengers who came from South Africa on Friday, the same day the Dutch and other EU members began imposing flight bans and other restrictions on southern Africa. But the newly identified cases predate that.

NOS, the Netherlands' public broadcaster, said that one of the two omicron samples came from a person who had been in southern Africa.

Belgium reported a case involving a traveler who returned to the country from Egypt on Nov. 11 but did not become sick with mild symptoms until Nov. 22.

Many health officials tried to calm fears, insisting that vaccines remain the best defense and that the world must redouble its efforts to get the shots to every part of the globe.

Emer Cooke, chief of the European Medicines Agency, said that the 27-nation EU is well prepared for the variant and that the vaccine could be adapted for use against omicron within three or four months if necessary.

England reacted to the emerging threat by making face coverings mandatory again on public transportation and in stores, banks and hair salons. And one month ahead of Christmas, the head of Britain's Health Security Agency urged people not to socialize if they don't need to.

After COVID-19 led to a one-year postponement of the Summer Games, Olympic organizers began to worry about the February Winter Games in Beijing. Chinese Foreign Ministry spokesperson Zhao Lijian said omicron would "certainly bring some challenges in terms of prevention and control."

World markets seesawed on every piece of medical news, whether worrisome or reassuring. Stocks fell on Wall Street over virus fears as well as concerns about the Federal Reserve's continued efforts to shore up the markets.

Some analysts think a serious economic downturn will probably be averted because many people have been vaccinated. But they also think a return to pre-pandemic levels of economic activity, especially in tourism, has been dramatically delayed. 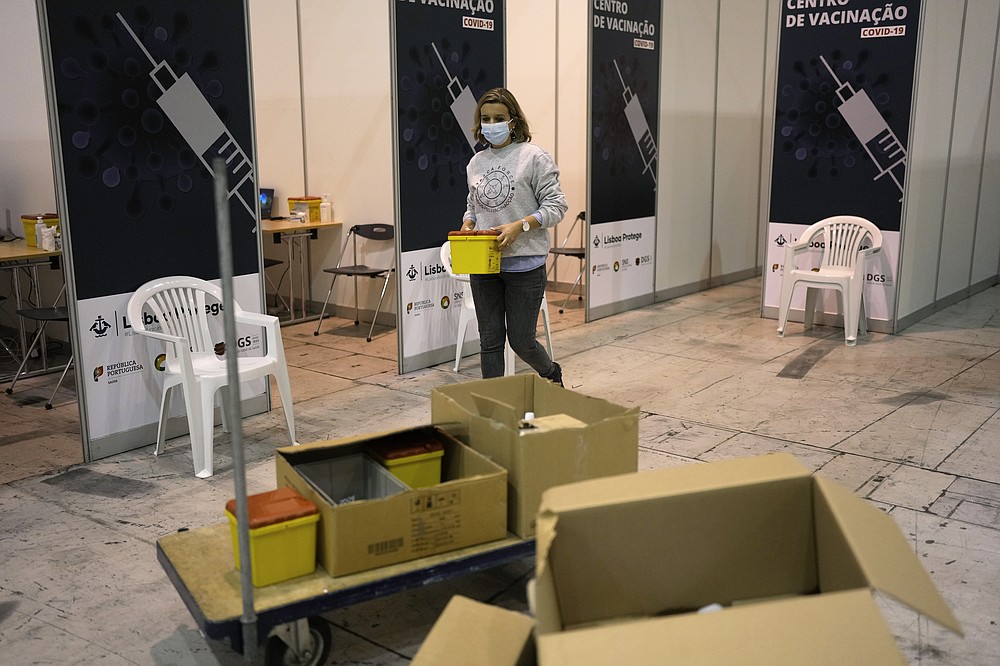 Workers get ready for the opening of a new vaccination center in Lisbon, Tuesday, Nov. 30, 2021. The new center, the biggest in the country, will open Wednesday, Dec. 1. Portuguese health authorities on Monday identified 13 cases of the omicron coronavirus variant among members of a top soccer club and were investigating whether it was one of the first reported cases of local transmission of the virus outside of southern Africa. (AP Photo/Armando Franca) 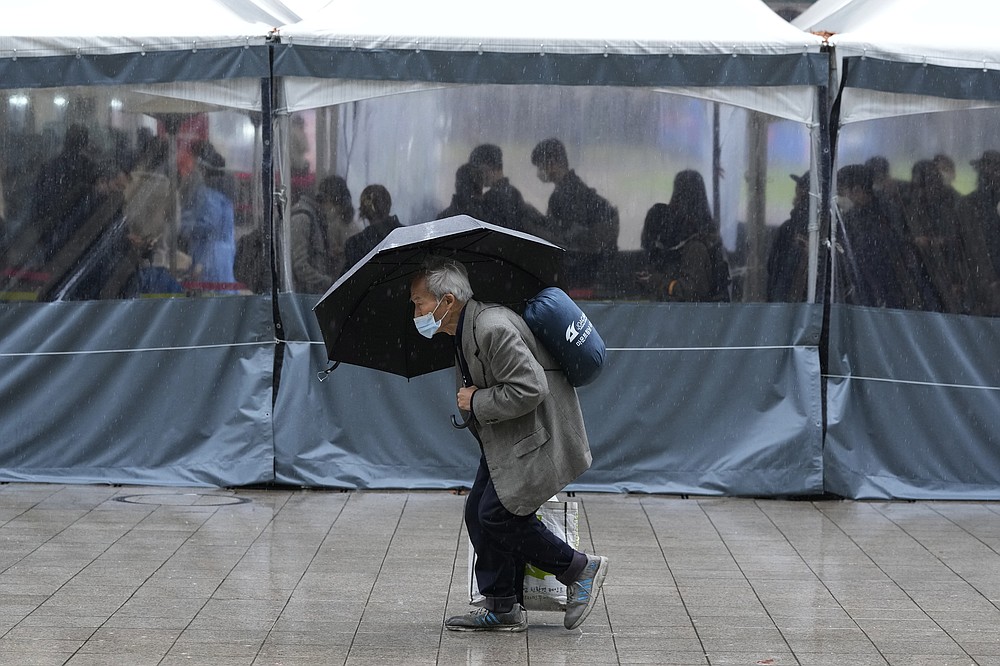 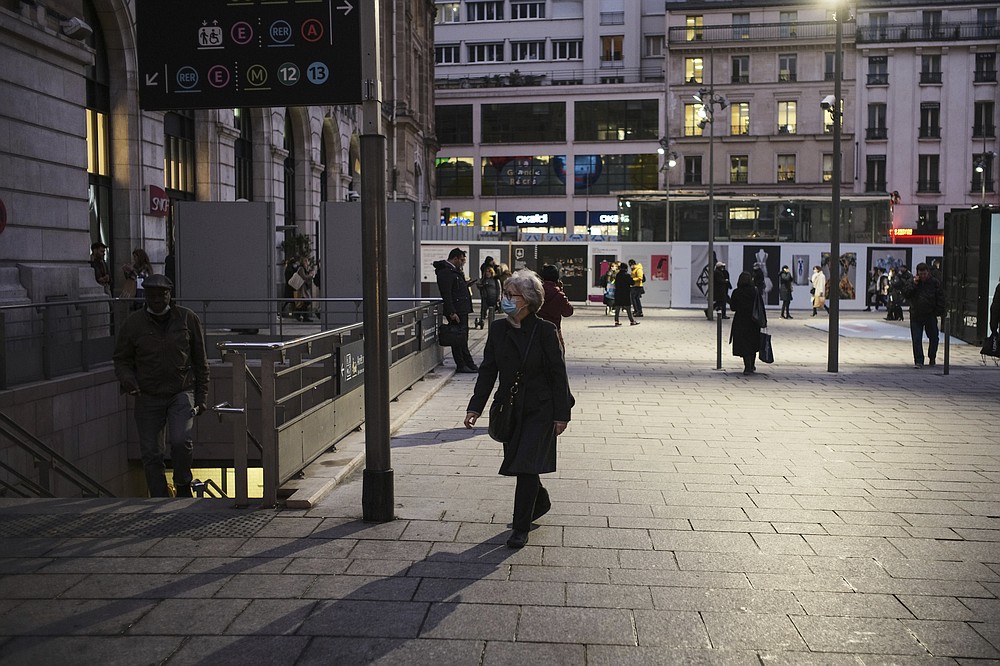 A woman wearing a face mask against coronavirus enters Saint Lazare train station in Paris, Tuesday Nov. 30, 2021. The new potentially more contagious omicron variant of the coronavirus popped up in more European countries on Saturday, just days after being identified in South Africa, leaving governments around the world scrambling to stop the spread. (AP Photo/Lewis Joly) 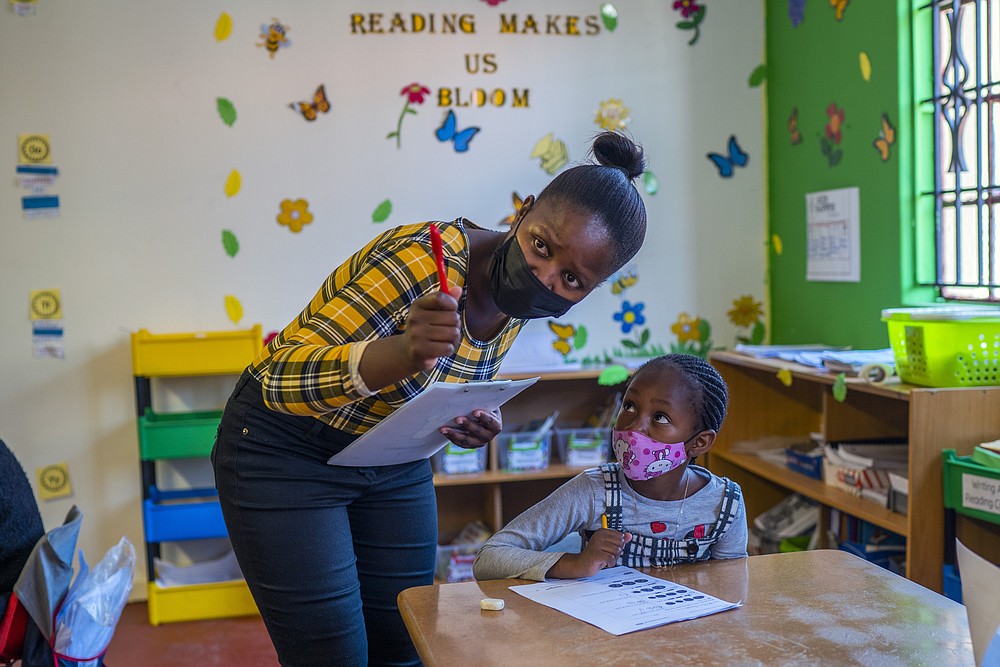 Pupils wearing masks study at the Kgololo Academy in Johannesburg&#x27;s Alexandra township Tuesday Nov. 30, 2021. Despite the global worry, doctors in South Africa are reporting patients victim of COVID-19 omicron variant are suffering mostly mild symptoms so far. But they warn that it is early and most of the new cases are in people in their 20s and 30s, who generally do not get as sick from COVID-19 as older patients. (AP Photo/Jerome Delay) 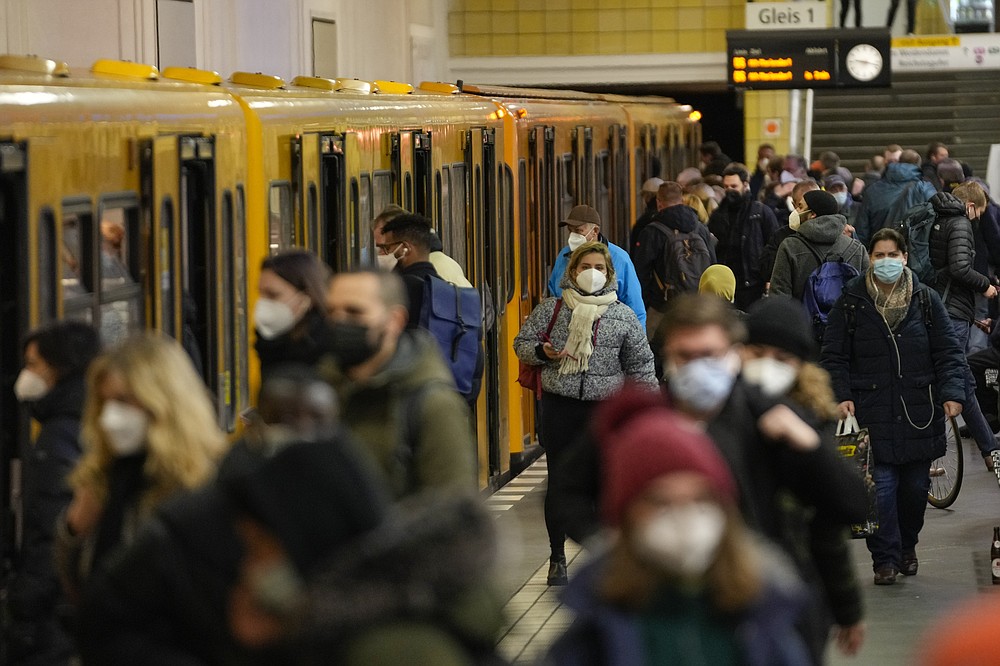 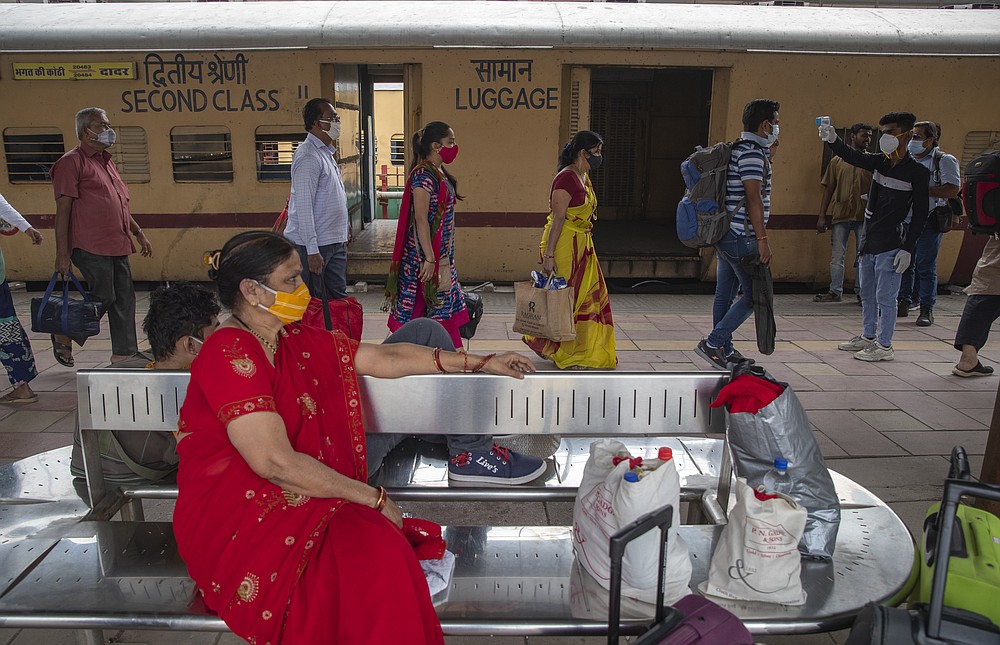 A health worker checks the body temperature of travelers as a precaution against the coronavirus before allowing them to proceed at train station in Mumbai, India, Tuesday, Nov. 30, 2021. (AP Photo/Rafiq Maqbool) 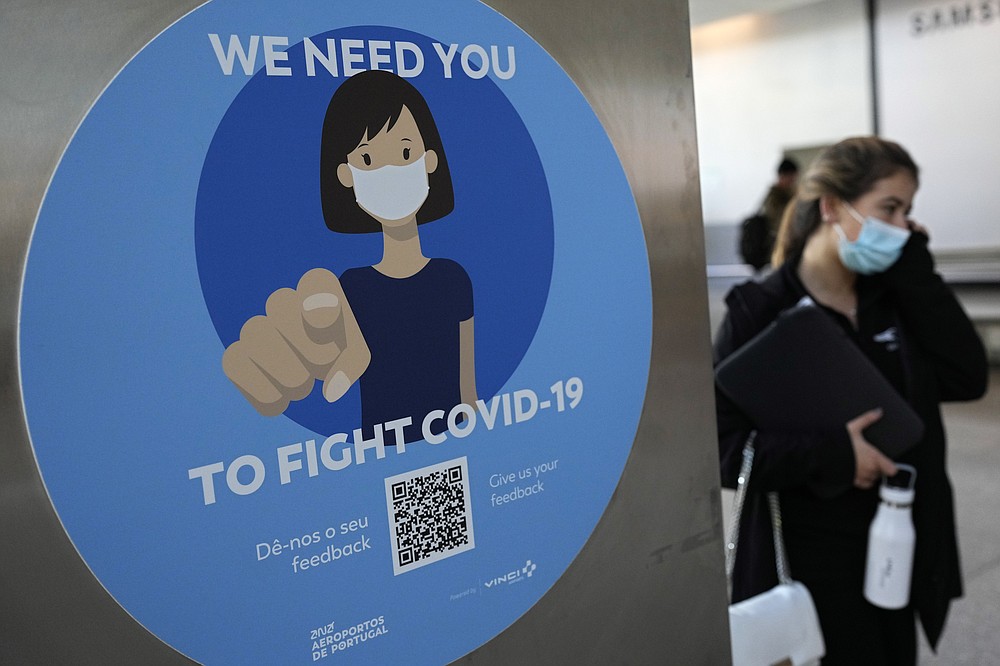 A woman wearing a face mask walks past a COVID-19 awareness sign at Lisbon&#x27;s international airport, Tuesday, Nov. 30, 2021. Portugal is bringing back some tight pandemic restrictions, less than two months after scrapping most of them when the goal of vaccinating 86% of the population against COVID-19 was reached. (AP Photo/Armando Franca) 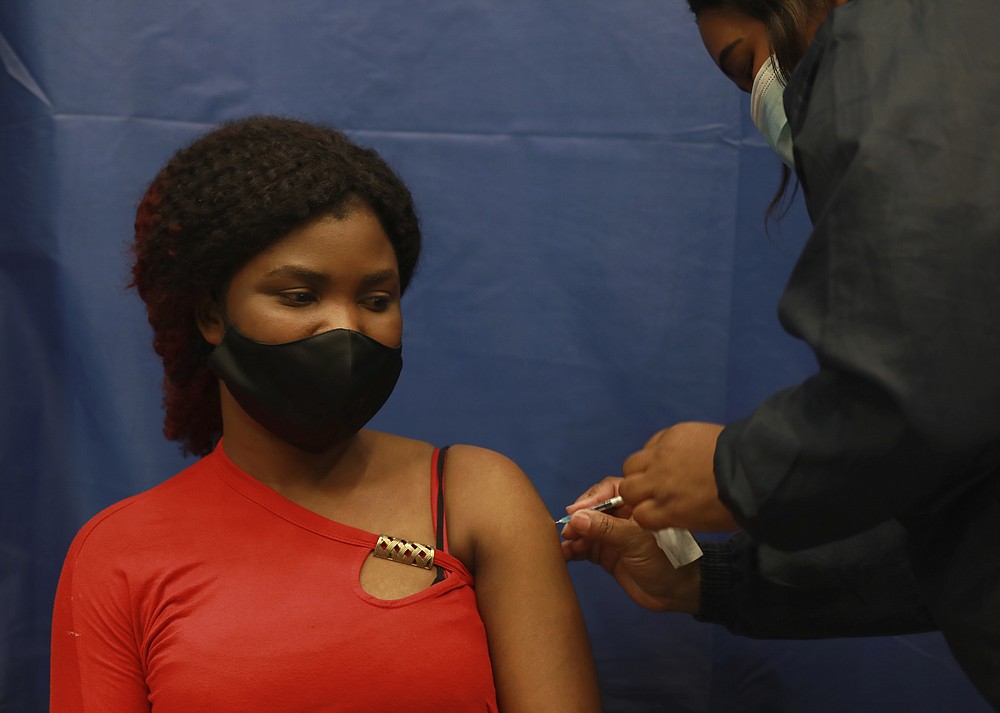 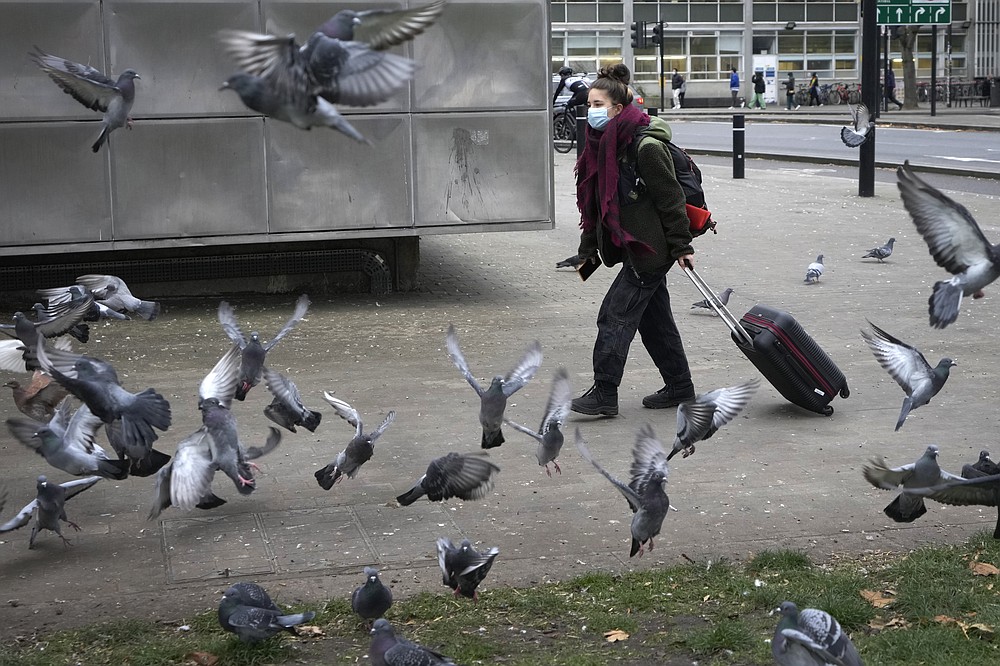 A woman wears a mask as she walks through pigeons in London, Tuesday, Nov. 30, 2021. With the emergence of the omicron variant the British government are requiring people to wear masks in shops and on public transport starting Tuesday. The omicron variant was already in the Netherlands when South Africa alerted the World Health Organization about it last week, Dutch health authorities said Tuesday, adding to fear and confusion over the new version of the coronavirus in a weary world hoping it had left the worst of the pandemic behind. (AP Photo/Kirsty Wigglesworth)