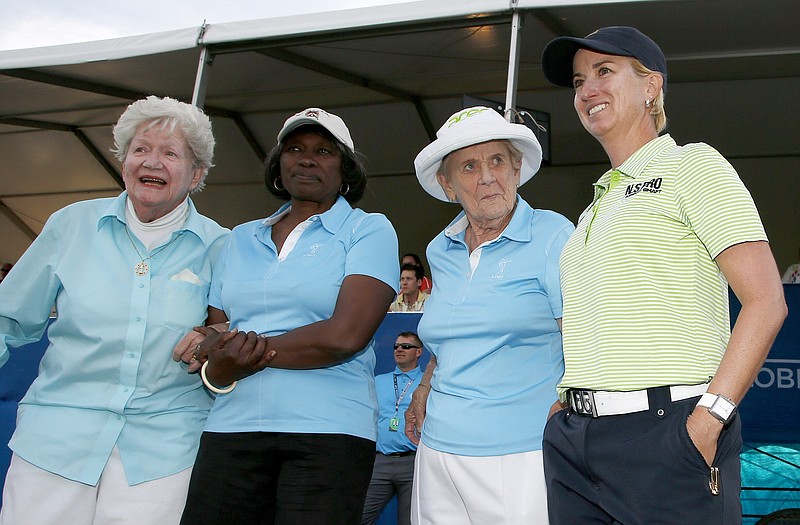 The 13 women who founded the LPGA Tour would have reason to be proud this week.

It goes beyond the tournament named in their honor, featuring nine of the top 10 players in the women's world ranking. It's not just that it will be played at Mountain Ridge, a Donald Ross design in northern New Jersey where one-third of the rounds are played by women.

The prize money is $3 million, the largest of any regular LPGA event, surpassed only by the five majors and the season-ending CME Group Tour Championship.

The real progress is how the Cognizant Founders Cup found new life.

Cognizant, a multinational technology company with headquarters in Teaneck, New Jersey, wanted to promote its brand and discovered through research that golf and its global appeal would be a perfect fit.

So it invested -- in men and women.

"What we're trying to do in the technology space is increase diversity, make it a level playing field for all genders, all races, all religions," he said. "That essentially is what the (LPGA) founders set out to do."

It joins a slowly growing list of top companies that are providing equal opportunity, and at times equal pay, in golf sponsorship.

Aon built its brand awareness on the jerseys of Manchester United for a decade. Then its president, Eric Andersen, said the company needed a sponsorship opportunity that would describe what Aon did instead of who it was.

A global professional services firm involved in risk, retirement and health solutions, it created the Aon Risk Reward Challenge. Players who had the lowest average score for the season on a designated par 5 each week -- typically a risk-reward hole -- earned a $1 million bonus.

"There's no difference between the PGA and the LPGA," Andersen said. "And we wanted to make a strong statement. There's a lot of dialogue around gender equity in pro sports. This was a great opportunity to put our money where our mouth is.

"The reaction from outside the community was great," he said. "And I can't overstate how great it was internally to do. It's been a real rallying cry for the team, one of those proud moments."

It brought Carlota Ciganda to tears when the Spaniard became the first LPGA winner of the award in 2019 (Brooks Koepka won on the PGA Tour). The $1 million prize was nearly what she earned the previous season.

"Thank you for putting the same money for men and women," Ciganda said that day. "I think I'm the winner, but women's golf is the winner today, the LPGA is the winner. So I think we are all very happy, very proud."

KPMG, a longtime sponsor of Phil Mickelson, signed up former world No. 1 Stacy Lewis and they were part of a commercial on breaking glass ceilings. That was right about the time KPMG became title sponsor of the Women's PGA Championship, elevating the longtime major with a higher purse (now $4.5 million, double what it was before KPMG got involved) and taking it to courses that previously held men's majors, such as Hazeltine and Aronimink.

In another major deal, Chevron announced Tuesday it would become the new title sponsor of the LPGA's first major championship of the year, raising its purse some 60% to $5 million.

Across the Atlantic, AIG's sponsorship of the Women's British Open has resulted in prize money next year of $6.8 million. And the USGA is expected to announce by the end of the year a presenting sponsor to boost the U.S. Women's Open purse, which already features the largest payout for the majors.

It's not always about equal pay, which can be a tricky business when accounting for the entire entertainment package, such as TV ratings, attendance and local sponsorship.

The gap is enormous, a product of interest and television.

The PGA Tour is starting a nine-year media rights deal worth an estimated $7 billion, which is why its total prize money is approaching $400 million. The LPGA Tour has no such deal, often buying its TV time, and has about $70 million in total prize money.

Equality can at least start with opportunity, and that's what Cognizant had in mind.

The company's entry into golf began with a deal to become one of three global partners for the next three Presidents Cup matches, starting in 2022. It was never going to stop there. Chand said Cognizant got into the golf business with men and women in mind.

So it purposely waited to announce the Presidents Cup deal until it had something lined up with the LPGA. The Founders Cup, canceled last year because of the coronavirus pandemic, was in the market for a new sponsor, and it turned out to be the perfect fit.

Along with moving the tournament from Arizona, Cognizant immediately doubled the size of the purse. The winner this week receives $450,000.

"One of the pieces we are very passionate about is to make a fairly equitably investment in both properties," Chand said.

Much like Aon, the decision was received just as well internally.

"The No. 1 feedback is, 'I'm proud to work for a company that puts its money where its mouth is.' We don't talk about diversity and inclusion. We do something," Chand said.

The Presidents Cup, scheduled for Sept. 22-25 next year at Quail Hollow in North Carolina, already has exceeded expectations for hospitality sales. Attendance, not to mention network viewership, is likely to dwarf what the Founders Cup gets this week.

For Chand, it was about more than that.

"We know of some of the challenges," he said. "But every small step is going to help in making it a much more equitable space." 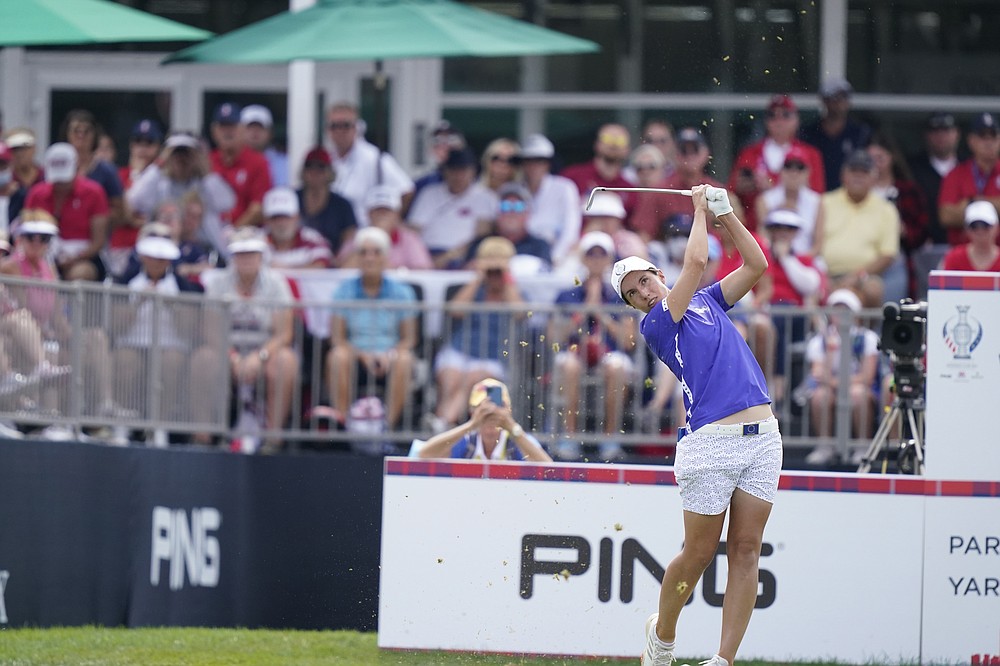 FILE - Europe's Carlota Ciganda drives off the 12th tee during a four-ball match for the Solheim Cup golf tournament in Toledo, Ohio, in this Saturday, Sept. 4, 2021, file photo. Ciganda was the first winner of the Aon Risk-Reward Challenge, which offered equal bonus money of $1 million to men and women. (AP Photo/Carlos Osorio, File)