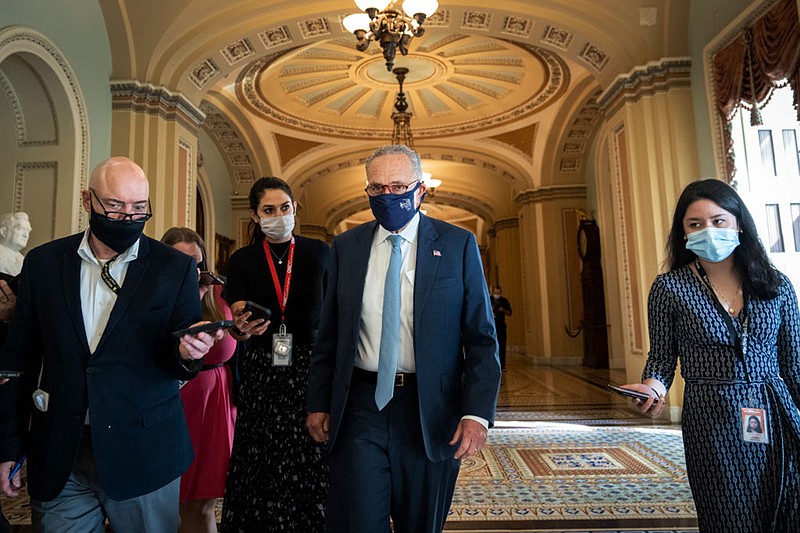 WASHINGTON -- The U.S. Senate approved legislation Thursday that pulls the nation from the brink of a first-ever payment default with a short-term debt-ceiling increase, breaking a weekslong stalemate that rattled financial markets.

The vote was 50-48, with no Republicans in favor of the measure that simply kicks the can toward another precarious debt-limit fight in less than two months. The $480 billion increase in statutory borrowing would run out around Dec. 3.

The debt limit increase still needs a vote in the House, which is currently on a break through next week. However House leaders have told lawmakers that they could be called back to Washington within 72 hours. It's expected to pass there, and the White House said President Joe Biden looked forward to signing into law.

"Republicans played a risky and partisan game, and I am glad their brinkmanship didn't work," Senate Majority Leader Chuck Schumer said after the bill cleared a procedural hurdle.

Schumer and Minority Leader Mitch McConnell struck a deal for the legislation earlier Thursday. News of the accord early sparked a rally in the stock market. The S&P 500 charted a third day of gains as the chances of an economically devastating tightening in fiscal policy abated -- at least for now.

The timeline sets up a collision course where various fiscal and policy battles will play out roughly simultaneously. funding for government operations also expires on Dec. 3, risking a government shutdown unless lawmakers can complete agency budgets for this fiscal year. Also, Democrats could be trying to push through Biden's broad economic package around that time.

McConnell had to work up until almost the last minute to get a sufficient number of Republicans to vote for a procedural motion -- called cloture -- to cut off debate and advance the debt ceiling legislation to the floor. In the, McConnell and 10 other Republicans voted to clear the way for the bill.

In a foreshadowing of the pitched battle in store in December, McConnell faced blowback from some members of his party, who said he had caved to the Democrats and others who didn't want their fingerprints on the deal as they face possible primary challenges next year.

"We were all standing together and making clear that Democrats had complete authority to raise the debt ceiling, and to take responsibility for the trillions of debt that they are irresponsibly adding to this country," Cruz said. "Schumer was on the verge of surrender. And unfortunately, the deal that was put on the table was a lifeline for Schumer."

Sen. John Thune of South Dakota, the chamber's No. 2 Republican, said that while there was enough GOP support to let the vote on passage happen, that's as far as it went.

"It's obvious nobody likes this issue," Thune said. "There aren't any Republicans in my time here that like dealing with the debt limit."

As the vote approached, former President Donald Trump, in a brief statement, implored Republicans to reject "this terrible deal being pushed by folding Mitch McConnell."

Congress raised the debt ceiling three times while Trump was in office, including in 2019, when it was suspended for two years.

The action in the Senate comes after weeks of partisan brinkmanship over how to raise the debt ceiling, which Treasury Secretary Janet Yellen has warned would be breached around Oct. 18 without congressional action.

"Everyone including me breathed a sigh of relief that we were able to reach an agreement that gets us to December third, but we do need to settle it longer term," Yellen said in an interview Thursday afternoon with CNN. "So we've got more work to do to get well past December third."

Yellen also repeated her call to ditch the limit, which leaves the Treasury chief with conflicting instructions to both make payments authorized by Congress yet to not raise debt in order to do so.

"It's become increasingly damaging to America to have a debt ceiling," Yellen said. "It's led to series of politically dangerous conflicts that have caused Americans and global markets to question whether or not America is serious or not about paying its bills. It's flirting with a self-inflicted crisis."

The legislation would avert an immediate crisis, but it means the partisan battle over the debt will again be on the calendar just as Congress confronts the deadline to keep the government open, with regular fiscal-year funding running out. Democrats are also likely at that time to be trying to get an infrastructure bill and a massive tax and spending plan through the House and Senate, with their slim majorities.

That could be politically perilous for Democratic lawmakers still sharply divided over Biden's $4 trillion worth of economic proposals -- particularly for moderates in swing states who worry about the overall cost.

McConnell said Republicans still want Democrats to raise the debt ceiling in December using a process known as reconciliation, which would leave Republicans entirely removed from the process.

Schumer has rejected that idea, instead trying unsuccessfully to clear it with only Democratic votes on a swifter path. He had argued that there wasn't enough time before the mid-October deadline. The process would take about two weeks, according to budget experts.

McConnell's short-term debt-limit move was designed to call the Democrats' bluff while showing Republicans were willing to be flexible, according to a person familiar with this thinking.

"Now there will be no question. They will have plenty of time," McConnell said Thursday.

By synchronizing the next debt-ceiling date and the shutdown cliff, Congress may be more likely to address them both in a single piece of legislation. Such a bill could include a top-line spending level agreement for fiscal 2022 that addresses GOP demands for higher defense spending -- thereby allowing full-year appropriations bills to be included.