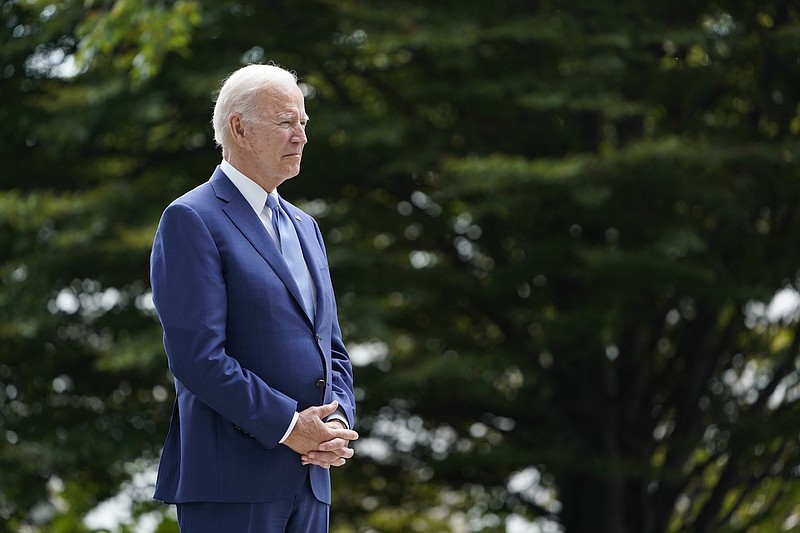 President Joe Biden waits to speak on the North Lawn of the White House in Washington, Friday, Oct. 8, 2021, during an event announcing that his administration is restoring protections for two sprawling national monuments in Utah that have been at the center of a long-running public lands dispute, and a separate marine conservation area in New England that recently has been used for commercial fishing. (AP Photo/Susan Walsh)

WASHINGTON -- The White House said Friday that President Joe Biden will not block the handover of documents sought by a House committee investigating the Jan. 6 insurrection at the U.S. Capitol, setting up a showdown with former President Donald Trump, who wants to shield those White House records from investigators.

The letter from White House counsel Dana Remus to the Archivist of the United States comes at the start of a potentially lengthy legal battle over the investigation. Trump, who told his supporters to "fight like hell" the morning of the insurrection and has defended the rioters who beat police and broke into the Capitol, is trying to block Congress from learning more. Biden has so far sided with House Democrats, who have asked for thousands of pages of documents and subpoenaed witnesses connected to Trump.

The House committee investigating the insurrection, which formed over the summer, now has the momentous task of sorting through the details and obtaining documents and testimony from witnesses who may or may not be cooperative. And the jockeying between the two administrations, Congress and the witnesses is certain to delay the investigation and set the stage for messy litigation that could stretch well into 2022.

In a separate development, a lawyer for Steve Bannon said the former White House aide won't comply with the House committee's investigation because Trump is asserting executive privilege. Bannon is the only one of the top Trump aides subpoenaed on Sept. 23 who was not working for the Trump administration on Jan. 6.

Remus wrote that Biden has determined that invoking executive privilege "is not in the best interests of the United States." The House panel had asked for the records, including communication within the White House under Trump and information about planning and funding for rallies held in Washington. Among those events was a rally near the White House the morning of Jan. 6 featuring remarks by Trump, who egged on a crowd of thousands protesting Biden's win.

Remus wrote that the documents "shed light on events within the White House on and about January 6 and bear on the Select Committee's need to understand the facts underlying the most serious attack on the operations of the Federal Government since the Civil War."

The Associated Press obtained a copy of the letter Friday. It was first reported by NBC News.

Trump responded with his own letter to the National Archives formally asserting privilege over nearly 50 documents.

Referring to the Presidential Records Act, Trump wrote, "I hereby make a protective assertion of constitutionally based privilege with respect to all additional records." He said if the committee seeks other information he considers privileged information, "I will take all necessary and appropriate steps to defend the Office of the Presidency."

The investigation sets up a unique clash, pitting the current administration against its predecessor. Since Biden now holds the office of the presidency, he will make the call on some of Trump's privilege claims. And while Biden has accommodated the first requests from Congress, the White House has said it will review new claims on a "case by case basis."

The final word may not rest with Biden, but the courts, if Trump decides to litigate -- which is expected -- or if the House votes to hold any of the witnesses in contempt of Congress. In the case of a House contempt vote, the Justice Department would then decide whether to prosecute.

If Trump were to win a case to block the documents, that would mark a dramatic expansion of the unwritten executive power. But he is expected to have an uphill battle, as courts have traditionally left questions of executive privilege up to the current White House occupant.

The leaders of the Jan. 6 panel, Democratic Rep. Bennie Thompson of Mississippi and Republican Rep. Liz Cheney of Wyoming, said in a statement Friday that "we will not allow any witness to defy a lawful subpoena or attempt to run out the clock, and we will swiftly consider advancing a criminal contempt of Congress referral."

The committee's subpoenas had set a Thursday deadline for Bannon, Meadows, Patel and a fourth witness, former White House communications aide Dan Scavino, to provide documents. They also set dates for interviews next week. Patel said in a statement that "I can confirm that I have responded to the subpoena in a timely manner" but would not elaborate. A spokesman for the committee declined to comment on whether Scavino was cooperating.

In a Sept. 23 letter to Bannon, the committee said he had been in contact with Trump in the weeks ahead of the attack, urging him to focus his efforts in overturning the election on Jan. 6, when Congress certifies electoral votes. The letter noted that Bannon had been quoted on Jan. 5 as saying "all hell is going to break loose tomorrow."

Bannon's lawyer, Robert Costello, said in an Oct. 7 letter to the panel that until the issues over privilege are resolved, "we are unable to respond to your requests for documents and testimony." Costello wrote that Bannon is prepared to "comply with the directions of the courts" when and if they rule.

Costello's letter includes excerpts from a separate letter to Bannon by Justin Clark, a lawyer for Trump. Clark says documents and testimony provided to the Jan. 6 panel could include information that is "potentially protected from disclosure by executive and other privileges, including among others the presidential communications, deliberative process and attorney client privileges."

The committee has subpoenaed 13 other individuals connected to the planning of Jan. 6 and set deadlines for documents and interviews later this month. 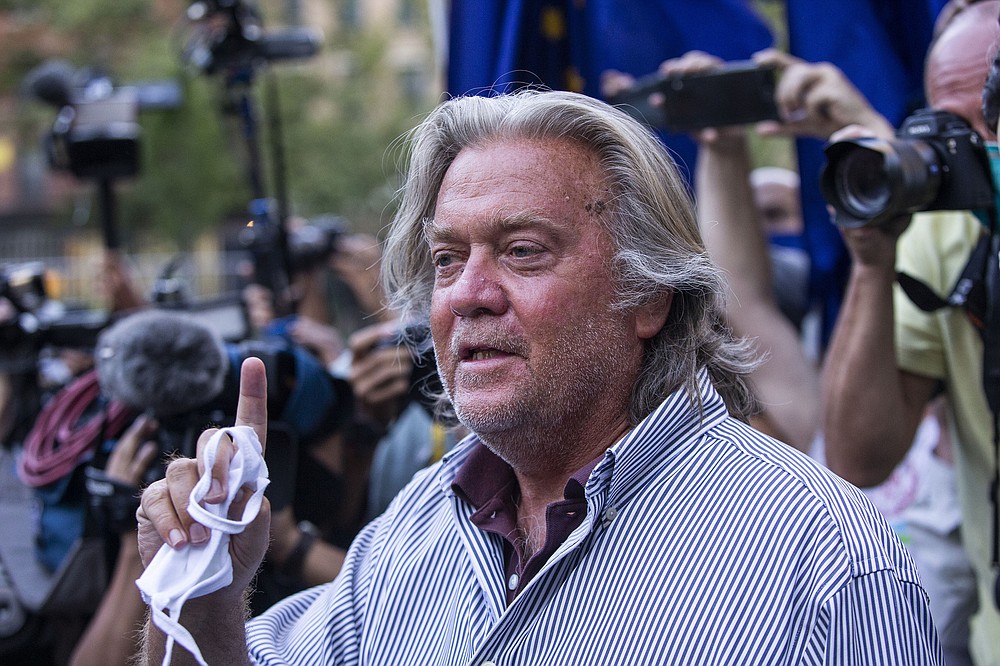 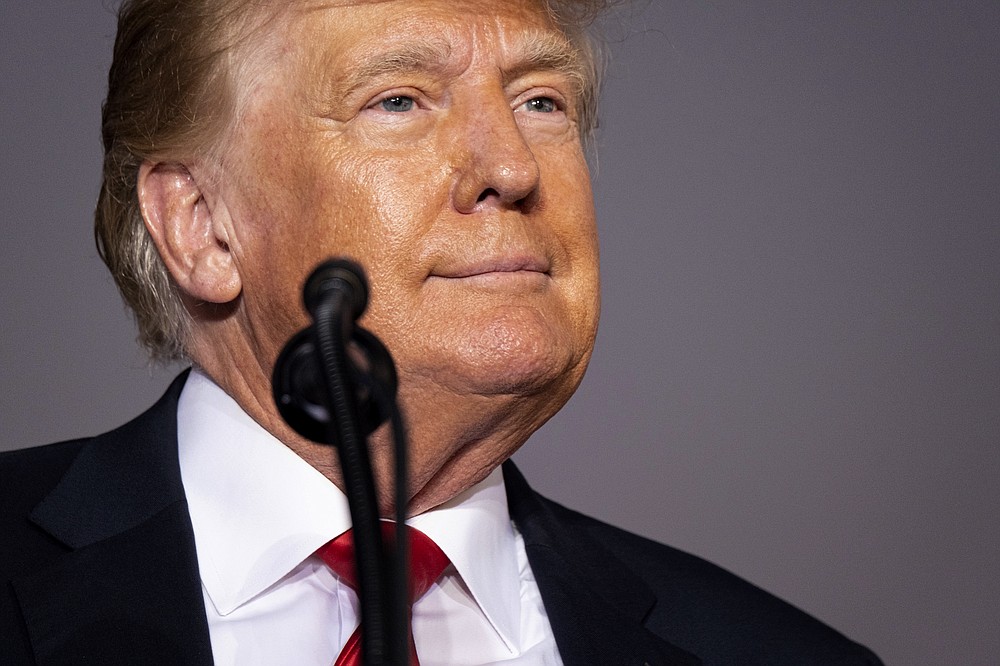 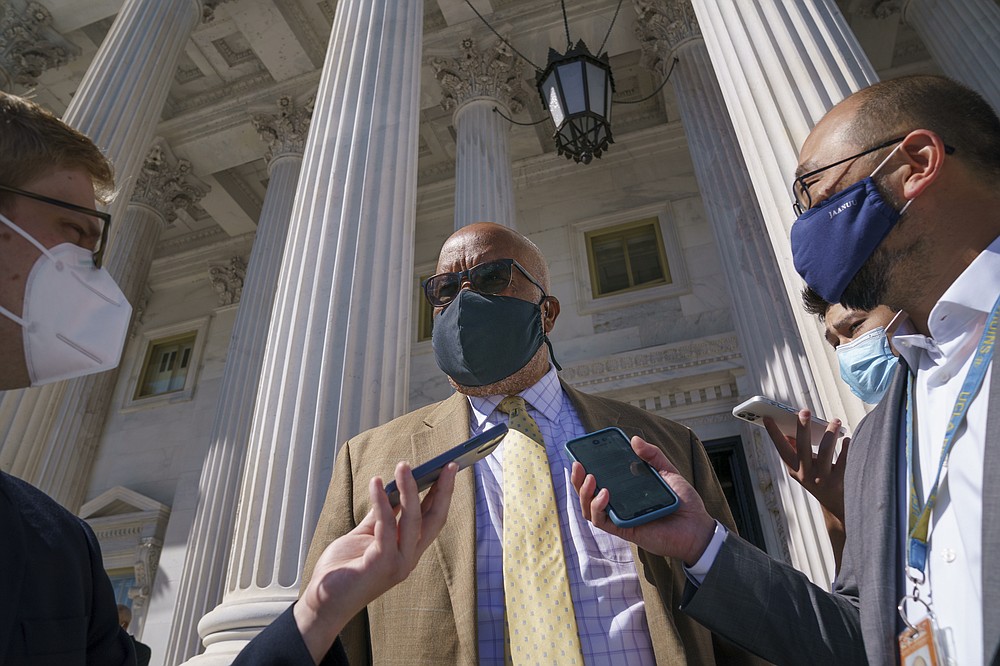 Rep. Bennie Thompson D-Miss., chairman of the House Select Committee on the January 6th attack speaks with reporters outside the Capitol in Washington, Friday, Sept. 24, 2021. His panel has subpoenaed four advisers and associates to former President Donald Trump who were in contact with him as hundreds of his followers violently broke into the building and tried to overturn his defeat: former White House Chief of Staff Mark Meadows, former White House Deputy Chief of Staff for Communications Dan Scavino, former Defense Department official Kashyap Patel and former adviser Stephen Bannon. (AP Photo/J. Scott Applewhite)