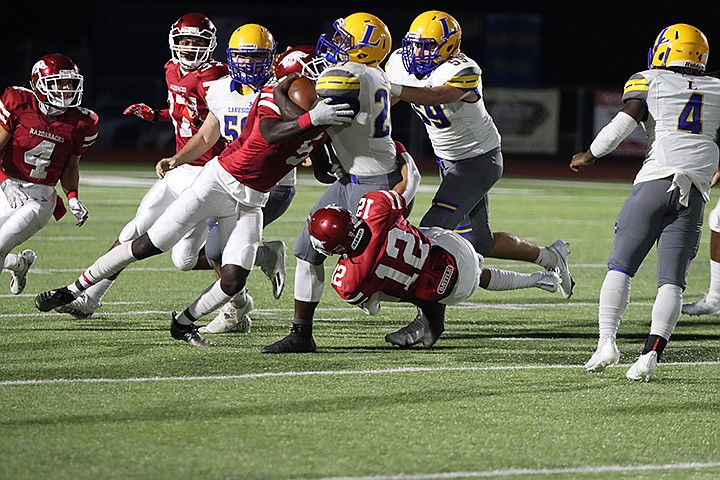 TEXARKANA, Ark. -- Arkansas High will not allow its rough start to conference play get in its way of a possible postseason berth.

Penalties, turnovers and a stingy Hot Springs Lakeside defense wreaked havoc on Arkansas High, with the Rams handing the program its third straight Conference 5A-South loss, 31-7, during Friday night's Homecoming game at Razorback Stadium. The loss marks the first time since the 2012-13 season that the Razorbacks have dropped three straight conference games -- back when they were part of the 7A/6A South.

Despite recent woes, Arkansas High head coach Barry Norton remains optimistic about the upcoming schedule and a shot at the playoffs.

"We have young players," Norton said. "We have an extra week to prepare before our next game against Hot Springs, so we will focus on getting better. We have to do better going forward as a team and that starts with myself and the coaching staff. We will work and prepare for the next game where we hopefully get a win and get back on track to make the playoffs.

"We will get better."

Lakeside (2-4, 1-2), which also entered the game looking for its first conference win, scored in each quarter and outgained the Hogs, 400-149, in total offense to post its first league victory.

The Rams got on the board early in the first quarter after Chance Cross intercepted a pass to help set up a 26-yard score when quarterback Jordan Mills found Brock Garner to take the early 7-0 lead. Running back Braylen Russell put Lakeside up, 14-0, at the end of the first quarter with a 1-yard score.

Mills finished the game 16-of-29 passing for 253 yards and three scores and Chase Cross and Russell teamed up for 110 yards rushing.

Arkansas High (1-4, 0-3) had a chance to answer back on its next possession, but back-to-back fumbles and penalties forced a punt on 4th-and-26 in Lakeside territory. On their ensuring drive, the Razorbacks would fumble again, resulting in another Rams' score, where Mills found Kyler Wolf on a 60-yard catch-and-run.

"We had some turnovers and some bad penalties that hurt us pretty bad," Norton said. "It's one of those things I say all the time, you have to do all the right things and, when you don't, it's hard to win."

Lakeside eventually went up 31-0 on a 33-yard field goal by Andrew DeGrassek and a 29-yard reception by Chase Cross before the Razorbacks would find the end zone with a 9-yard run by Logan Williams late in the fourth quarter.

Layton Lammers completed six of 24 passes for 73 yards and an interception for the Razorbacks. Kyron Young had a team-high 44 yards rushing on seven attempts and Marjaevion Cummings added 15 yards on eight tries.

"We will have an upcoming bye week so we will use that time to prepare and try to get better," Norton said. "We will have to be ready to play because we need wins to get into the playoffs, which is where we want to be."