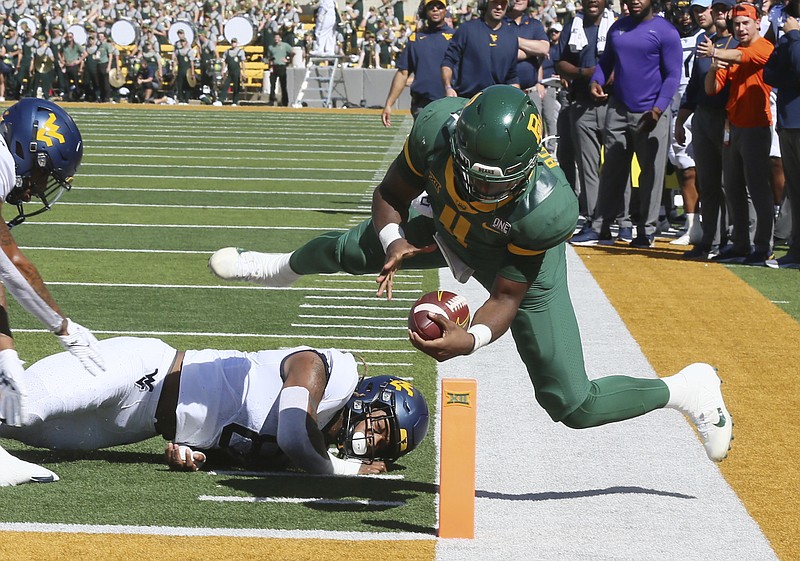 Baylor quarterback Gerry Bohanon is knocked out of bounds short of the goal line as West Virginia linebacker VanDarius Cowan defends in the first half of an NCAA college football game, Saturday, Oct. 9, 2021, in Waco, Texas. He would score on the next play. (Rod Aydelotte/Waco Tribune-Herald via AP)

WACO, Texas -- Gerry Bohanon saw something in his Baylor teammates during the week with the offense coming off a poor showing that helped knocked the Bears out of the Top 25.

Whatever the quarterback saw showed up on game day.

Bohanon had career highs of 336 yards passing and four touchdowns, including a 75-yarder to Tyquan Thornton on the second play of the game, while also scoring on a 1-yard sneak in Baylor's 45-20 victory over West Virginia on Saturday.

Thornton caught eight passes for a career-best 187 yards and two TDs as the Bears scored on four of their first five possessions a week after starting with eight consecutive punts in a 24-14 loss to Oklahoma State right after Baylor had entered the poll.

"That wasn't our offense," Bonahon said. "So this week, we had a really good week, like a really, really good week. Just stacked days on days this week and we knew we were going to come out and dominate. We knew last week, we couldn't do that anymore."

With the Bears (5-1, 3-1 Big 12) celebrating the 10th anniversary of Robert Griffin III's Heisman Trophy season by showing frequent highlights, Bohanon was 18 of 29 with no interceptions, giving the fourth-year junior 183 career attempts without a pick.

Jarret Doege was sacked six times, and the Mountaineers (2-4, 0-3) again couldn't get the Big 12's worst run game going. West Virginia, which had 90 mostly empty yards rushing, has lost its first three conference games for the second time since joining the league in 2012.

"We didn't consistently block them, and we never covered them," coach Neal Brown said. "If you can't block them on offense and you don't cover them on defense it's going to be a long day. And it was."

Thornton caught Bohanon's first pass 7 yards from the line of scrimmage, split the defense and ran untouched on a play that was 3 yards shy of the longest of the senior's career.

"We haven't covered Thornton yet," Brown said. "He may still be running out there wide open."

The Mountaineers needed just 1:38 to get even when Sean Ryan caught a 12-yard pass from Doege that was tipped by Baylor safety Christian Morgan.

Doege was 24 of 37 for 272 yards with a touchdown and was replaced with the game out of reach by Garrett Greene, who had a 13-yard scoring run late.

Baylor scored the next 21 points, including a delayed TD signal on Bohanon's sneak, a score set up by Jalen Pitre's interception at the West Virginia 48.

Baylor: The Bears didn't need to re-establish the No. 2 rushing offense in the Big 12 after getting held to 107 yards on the ground against Oklahoma State. The passing game took over early. Bohanon and Thornton connected for 44 yards not long after the early TD, and a 58-yard completion to Drew Estrada set up Thornton's second TD. Abram Smith had a punctuating 31-yard TD run in the third quarter.

The Bears were fourth among teams receiving votes in The Associated Press poll. This was an impressive victory after four of the previous five meetings with West Virginia were decided by six points or less. It might be enough to get back Baylor back in.

Besides the looks back at Baylor's only Heisman winner in Griffin from 2011, Baylor also honored its NCAA champion men's basketball team at halftime. The band carried a giant cutout of coach Scott Drew's head, and the players hoisted the trophy to cheers from the crowd.

West Virginia: After an open week, the Mountaineers make a second consecutive trip to Texas to face TCU on Oct. 23. 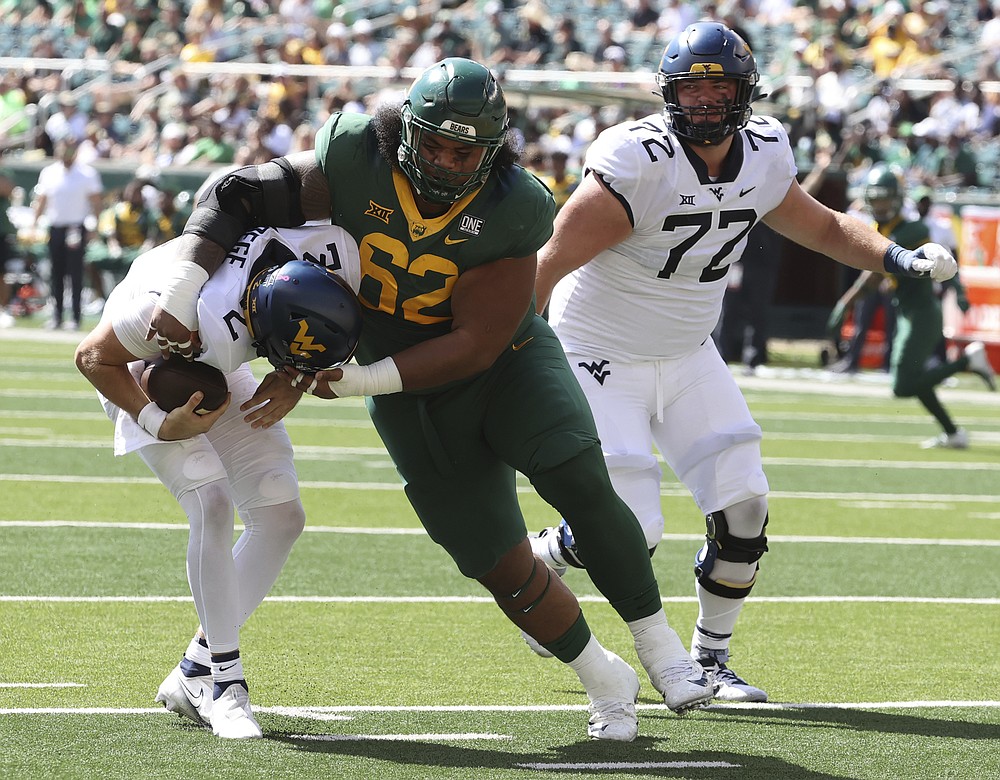 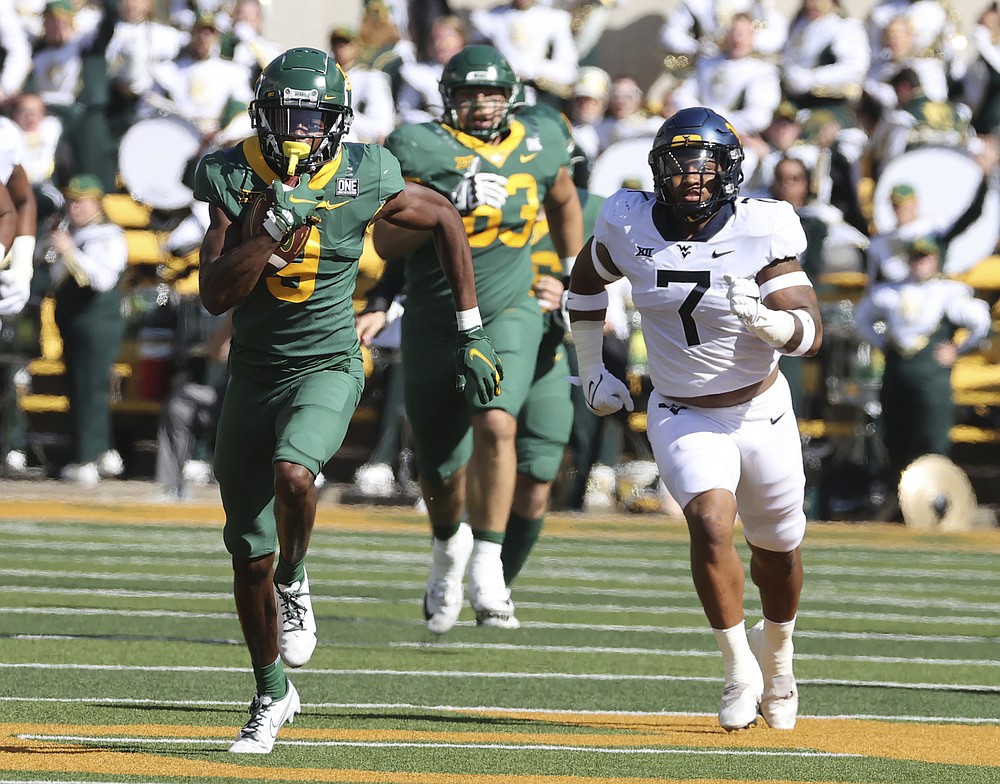 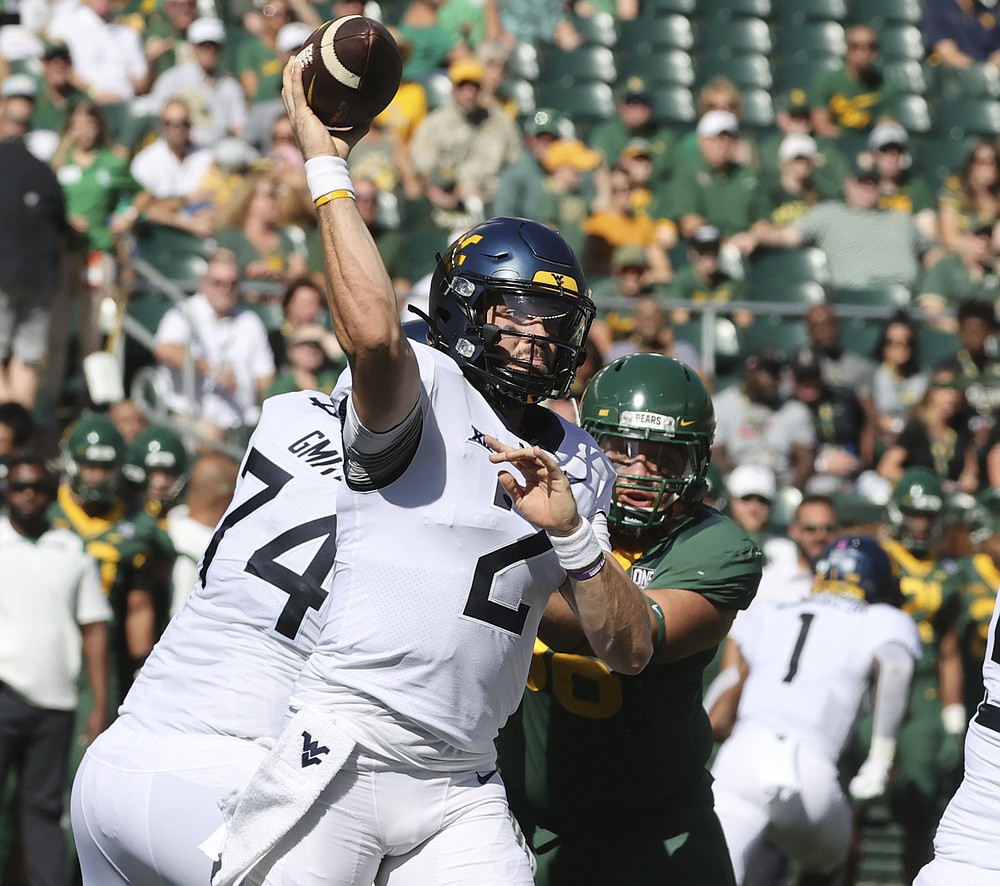 West Virginia quarterback Jarret Doege throws to the sideline while being pressured by Baylor in the first half of an NCAA college football game, Saturday, Oct. 9, 2021, in Waco, Texas. (Rod Aydelotte/Waco Tribune-Herald via AP) 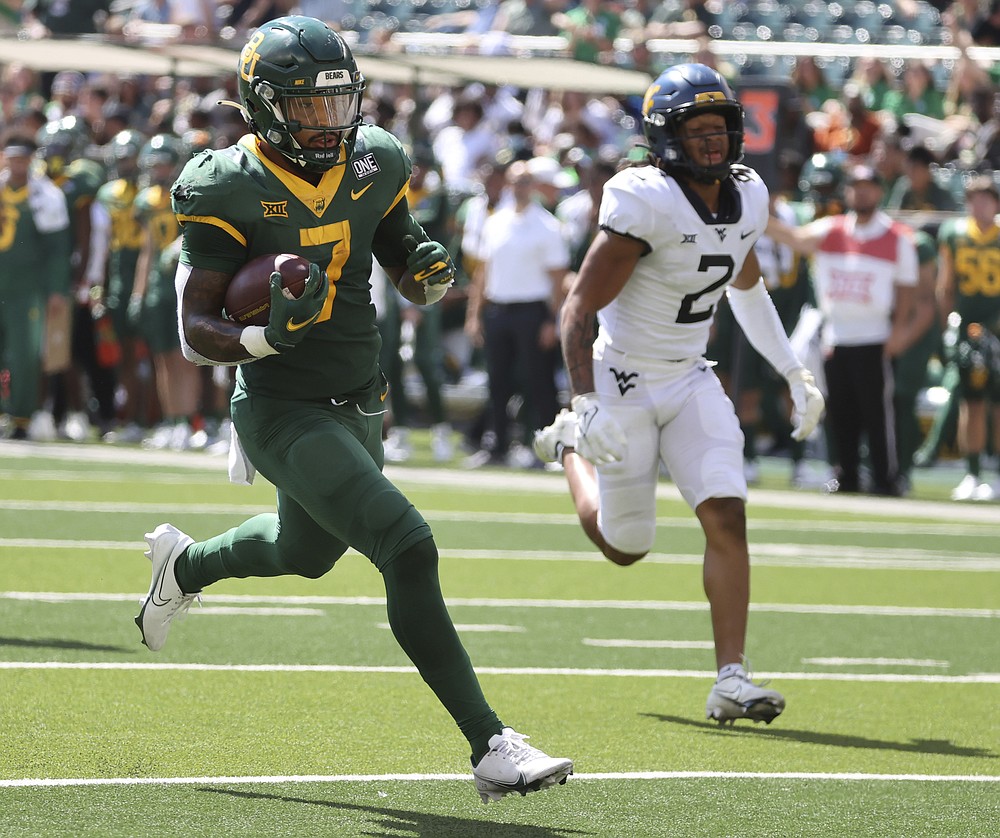