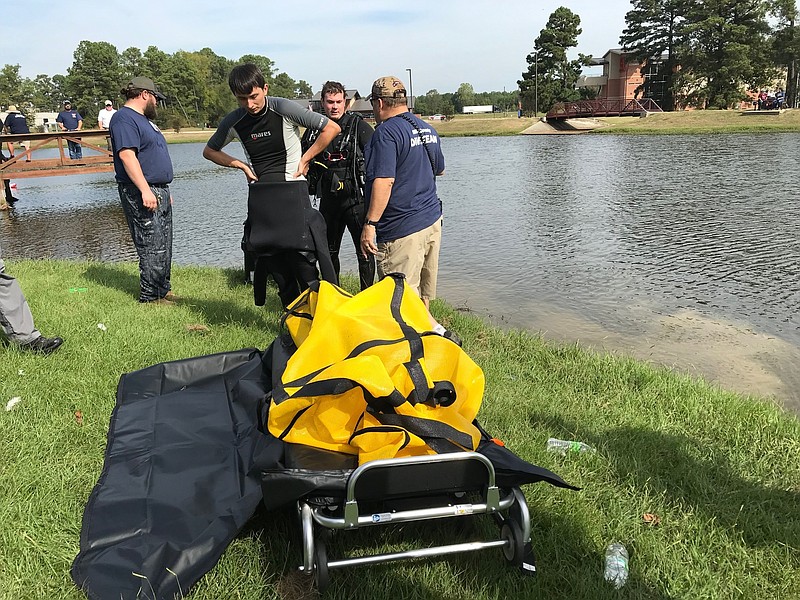 During Saturday's exercise, the team's recovery operations involved finding a mannequin and a Halloween Skeleton in about 15 feet of water. The weapons and cellphone were recovered from a murky depth where visibility was limited to about 10 inches.

"This is the team's first annual exercise since it reformed earlier this year," Bennett said. "They have gone on to receive their dive team certifications and today, they are showing us what they've learned in the last six months regarding under water searches for recovering potential discarded crime scene evidence."

The three-hour training program also included emphasis on coordinating operational response, coordination and communication with the Miller County Sheriff's Office along with the Texarkana, Arkansas, police and fire departments.

Eric Winters, a TAPD investigator, said four of the department's officers are on the 15-member team.

Bennett added that the team's expertise can be used to help aid evidence recovery not only for Miller County, but also for helping local cities, along with other county law enforcement investigations in the Texarkana area.

Bennett said any donations the public could make to OEM, which serves under county the judge's office, would be greatly needed and appreciated.

"Besides criminal evidence recovery, the team also works on cases involving accidental drowning cases," he added. "This team trains every month and it will continue to conduct these annual recovery exercises. These exercises can take place any time of the year (including in the winter) because the team could be called out at any time of the year."

"One tug on the rope from a dive team member means that things are OK, two tugs means more slack on the line is needed, three tugs means the objects have been recovered and four means help is needed," Loehr said.

Loehr added that the dive team initially formed in 2012 but reformed in April of this year.

Miller County Judge Cathy Harrison, who attended the team exercise demonstration, said she is glad the group is back.

"Travis has done a great job in leading this team because specialized groups like this are needed," she said.