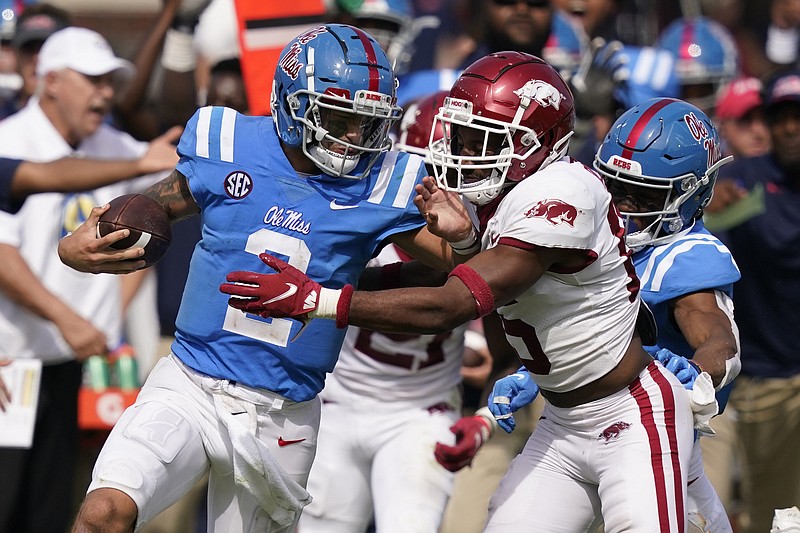 OXFORD, Miss. -- Matt Corral promised it would be different this time against No. 13 Arkansas.

The Mississippi quarterback, who threw six interceptions last year against the Razorbacks, delivered, leading the Rebels to a wild victory that was sealed by the defense.

Sam Williams and Tavius Robinson pressured Arkansas quarterback KJ Jefferson on a potential game-winning 2-point conversion and No. 17 Mississippi held on 52-51 Saturday after allowing a touchdown on the final play of regulation.

Arkansas (4-2, 1-2 SEC) scored on a 9-yard pass from Jefferson to Warren Thompson as time expired to pull within a point and decided to go for the win.

Jefferson rolled right and under extended pressure from Williams and Robinson, overthrew Treylon Burks in the end zone.

"However it works, it's a win," Mississippi coach Lane Kiffin said. "Obviously, it's a huge play at the end. Offensively, we did well. I've been in games like this before and it's a lot better when you win."

Ole Miss (4-1, 1-1) took the lead with 1:07 remaining as Corral threw a 68-yard touchdown pass to Braylon Sanders, accompanied by a soaring clipboard flip by a trailing Kiffin, racing down the home sideline.

Arkansas answered with a 9-play, 75-yard touchdown drive to set up the decisive 2-point play.

"We had three options on the two-point play," Razorbacks coach Sam Pittman said. "We could pitch, pass or run and we felt confident. They made the play."

The frantic final two minutes capped an overwhelming offensive performance by both teams with 1,287 total yards and 14 touchdowns.

Corral vowed as far back as SEC Media Day in July to redeem himself against Arkansas: "The next time I play that defense, it's going to be much different," he said then.

"Down to the last seconds and them with the ball in their hands and you really don't want that," Corral said. "But it was a great football game and a great team win for us."

Sanders had two receptions for 127 yards while Henry Parrish Jr. and Snoop Conner rushed for 111 and 110 yards, respectively.

"My number was called and I'm supposed to make plays," Sanders said. "It was a double move and I was able to sell it and run by the defensive back. After that, I knew Matt would see me open. Our defense really stopped up to get the stop at the end."

Jefferson accounted for six touchdowns, was 25 of 35 passing for 326 yards and added touchdown runs of 5, 6 and 10 yards. Burks had seven receptions for 136 yards and Raheim Sanders rushed 17 times for 139 yards as the Razorbacks had 676 total yards.

It was a heck of a football game and we knew we were going for two if we had the chance at the end of the game," Pittman said. "The difference in the game was we put the ball on the ground once, missed a field goal and they didn't. We just had too many mistakes on defense."

Arkansas: Jefferson was brilliant and the Razorbacks showed no ill effects from last week's loss at No. 2 Georgia. But the defense gave up 324 yards rushing yards, including two late long touchdown runs by Conner.

The top-loaded schedule eases a bit after next week, which should allow the Razorbacks an opportunity to regroup for a November run that includes a road date at No. 1 Alabama.

Ole Miss: Any questions regarding the ability of the Rebels to respond after a disappointing road loss to Alabama were answered, but a defense that struggled so much last season is still far from fixed.

"We stopped them on one play in the second half, so I guess that's a good thing," said Kiffin, with tongue planted firmly in cheek.

The Rebels and Razorbacks have been as evenly matched as possible over the past seven meetings, with five of those games being decided by four points or less. Ole Miss has won three of the last four in the series.

The win should provide a bump up for the No. 17 Rebels, but moving to the Top 10 would be unlikely. Despite the degree of difficulty and heart-breaking finish, No. 13 Arkansas will be hard pressed to remain in the Top 15 after consecutive road losses.

Arkansas: The Razorbacks return home to face No. 18 Auburn. 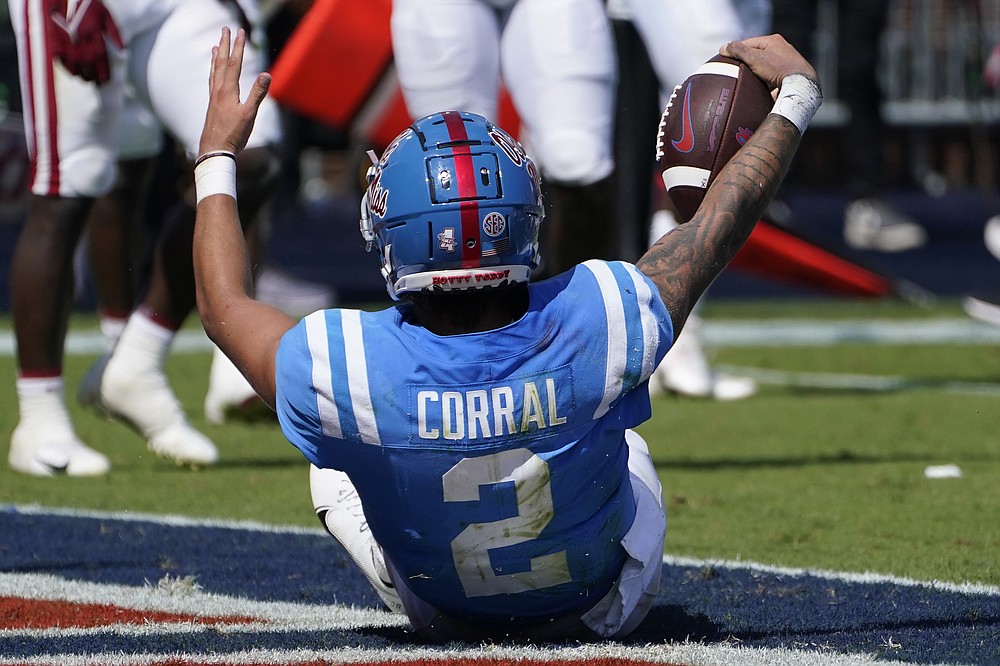 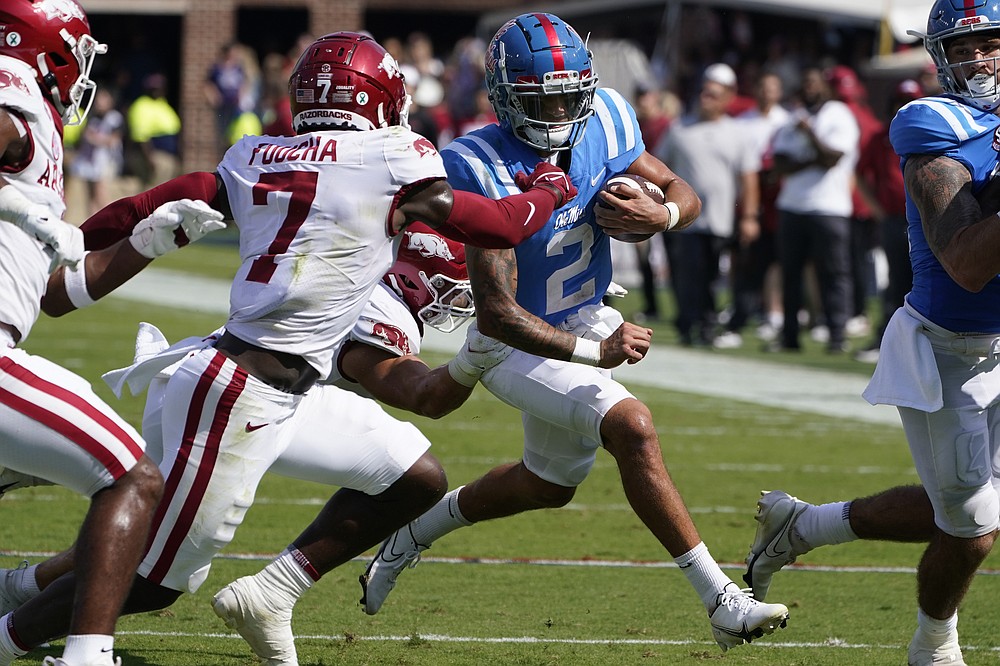 Mississippi quarterback Matt Corral (2) runs for a first down while being pursued by Arkansas defensive back Joe Foucha (7) during the first half of an NCAA college football game against Arkansas, Saturday, Oct. 9, 2021, in Oxford, Miss. (AP Photo/Rogelio V. Solis) 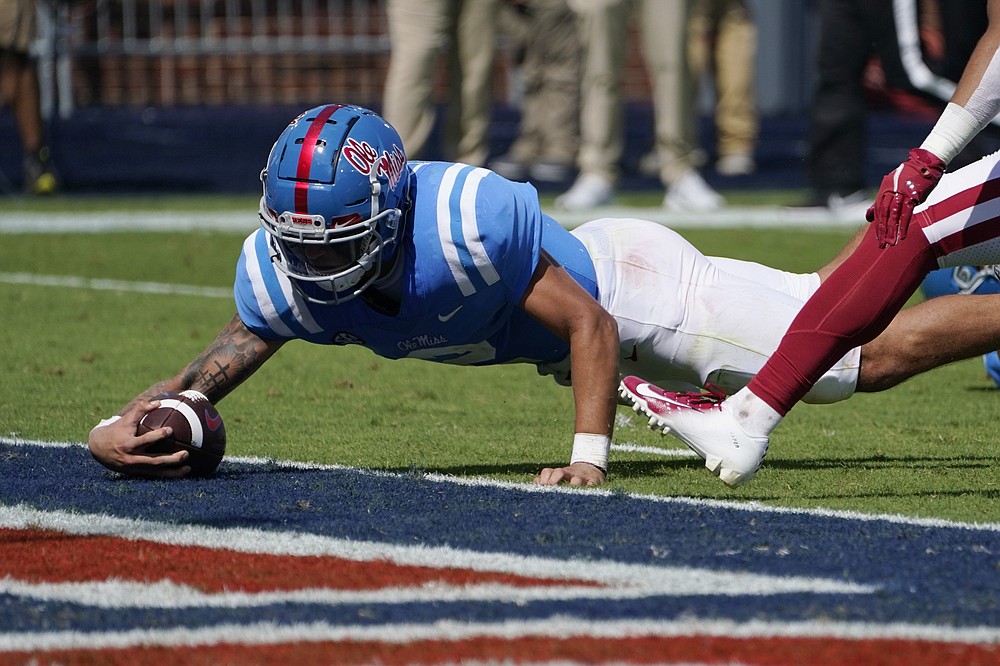 Mississippi quarterback Matt Corral (2) stretches over the goal line for a seven-yard touchdown run against Arkansas during the first half of an NCAA college football game, Saturday, Oct. 9, 2021, in Oxford, Miss. (AP Photo/Rogelio V. Solis) 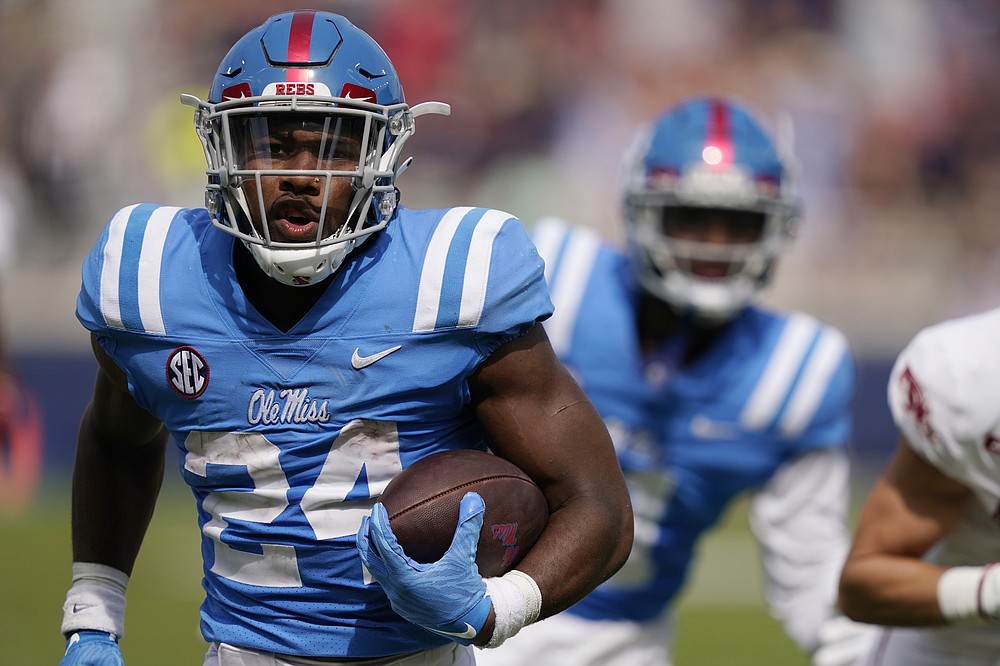 Mississippi running back Snoop Conner (24) rushes past a teammate on his way to a 34-yard touchdown run during the second half of an NCAA college football game, Saturday, Oct. 9, 2021, in Oxford, Miss. Mississippi won 52-51.(AP Photo/Rogelio V. Solis) 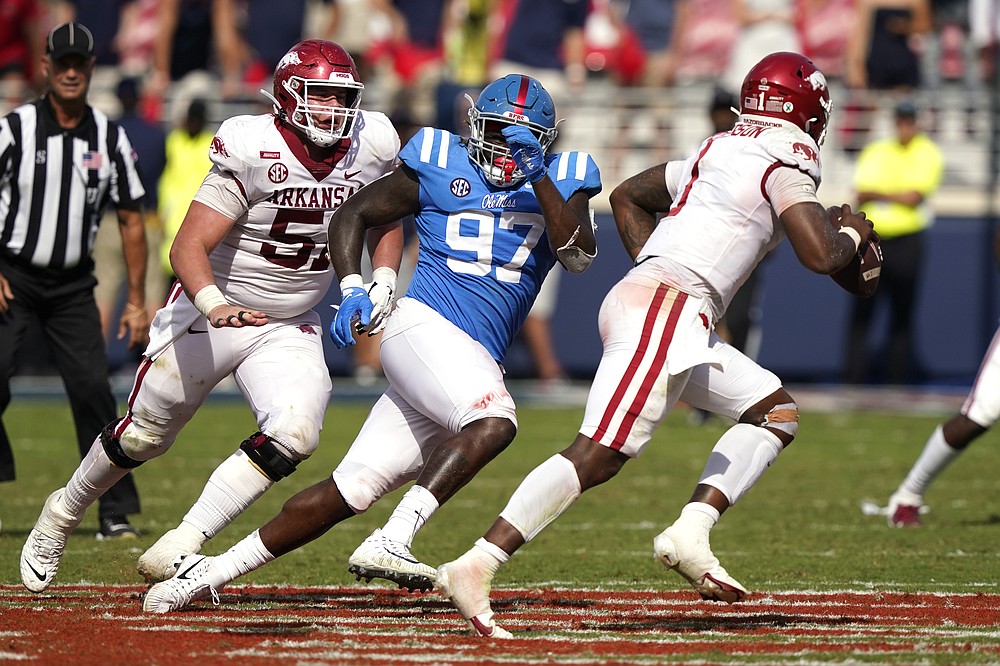 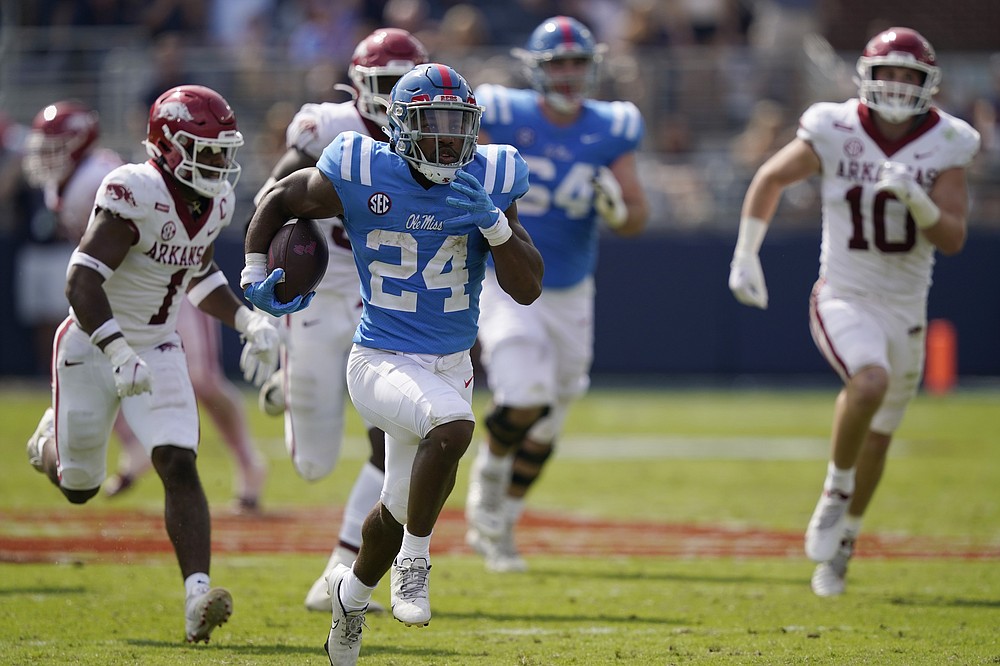 Mississippi running back Snoop Conner (24) runs past a host of Arkansas defenders on his way to a 51-yard touchdown run during the second half of an NCAA college football game, Saturday, Oct. 9, 2021, in Oxford, Miss. Mississippi won 52-51.(AP Photo/Rogelio V. Solis)