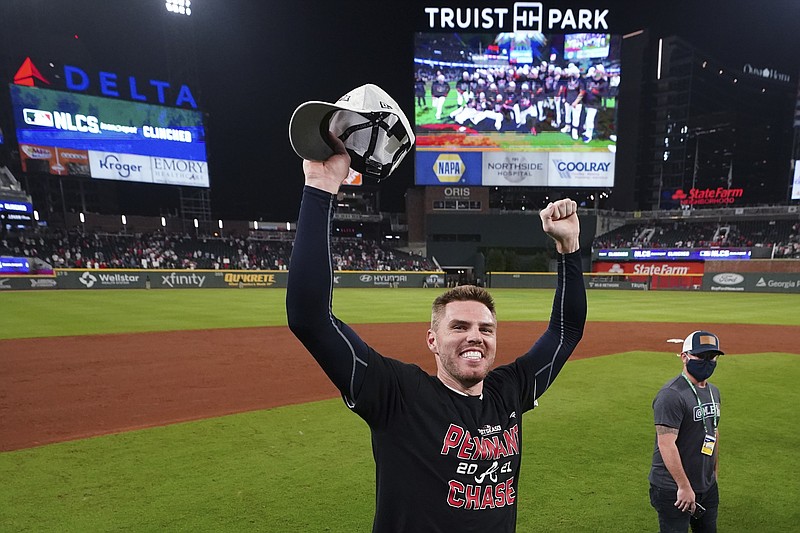 ATLANTA -- Freddie Freeman and the Atlanta Braves will get another chance to finish the job they came agonizingly close to achieving a year ago.

It doesn't matter at all that they had fewer wins than any other playoff team.

Freeman hit an improbable, tiebreaking homer off Milwaukee closer Josh Hader with two outs in the eighth inning and the Braves advanced to the NL Championship Series for the second year in a row, finishing off the Brewers 5-4 on Tuesday night.

The Braves won the best-of-five Division Series three games to one, advancing to face either the 107-win San Francisco Giants or the 106-win Los Angeles Dodgers with a trip to the World Series on the line.

"I've had a lot of cool moments in my career," Freeman said. 'I think that's gonna top 'em all. Hopefully it's not the last one and I've got a couple more in these playoffs."

The game was tied at 4 when the Brewers brought on Hader to make sure it stayed that way. The hard-throwing lefty struck out Eddie Rosario and Dansby Swanson, but he couldn't get past the 2020 NL MVP.

Freeman caught up with an 84-mph slider, launching a 428-foot drive into the seats in left-center -- only the fourth homer all season off Hader, and first since July 28.

Freeman became the first left-hander to homer off Hader since Jason Heyward in 2020.

"The first two guys went down, so I just tried to get a pitch up and he hung a slider and I put a good swing on it," Freeman said. "There was no rhyme or reason to it."

Freeman celebrated wildly on his way around the bases, and popped back out of the dugout for a curtain call as the crowd of 40,195 roared. He became the first player in franchise history to hit a go-ahead home run in the eighth inning or later in a series-clinching win, ESPN Stats & Info said.

"When Freddie hit that ball, I mean, I lost my poise. Everybody in the dugout was going crazy," teammate Ozzie Albies said.

Will Smith pitched a scoreless ninth for his third straight save in the series, getting Christian Yelich to look at strike three with a runner on first for the final out. Tyler Matzek claimed the win with a perfect eighth.

Despite having fewer wins (88) than any other playoff team -- and even two teams that didn't make the postseason -- the NL East champion Braves are headed back to the NLCS for the second season in a row.

A year ago, manager Brian Snitker's team had a 3-1 series lead, only to lose three straight games to the eventual World Series champion Dodgers.

But this team, which floundered under .500 until Aug. 6, overcame so much adversity to clinch its fourth straight division title in the final week.

A season-ending injury to star Ronald Acuña Jr. and legal issues that sidelined Marcell Ozuna forced the Braves to acquire a whole new outfield before the trade deadline.

"We've been feeling really good about ourselves in the second half, playing really good baseball," Freeman said. "We carried it over to the postseason."

After the Braves and the Brewers combined for just nine runs through the first 30 innings of the series, the offenses suddenly came to life in the fourth.

The NL Central champ Brewers touched home for the first time since Game 1, getting RBI singles from Omar Narváez and Lorenzo Cain to snap a 22-inning scoreless streak. Narváez's hit also broke an 0-for-20 performance by 95-win Milwaukee with runners in scoring position in the series.

But the Braves bounced back in the bottom half, even though Milwaukee may have caught a huge break on a deflected foul popup that was ruled a catch even through it appeared to hit the dirt. Pinch-hitter Eddie Rosario came through with a two-out, two-run single to center.

Milwaukee surged ahead again in the fifth, this time on Rowdy Tellez's second two-run homer of the series. His first, way back in the seventh inning of Game 1, had produced the Brewers' only runs of the series until Tuesday. This second one off Huascar Ynoa was a massive shot, plopping into the fountain beyond the center-field wall.

Back came the Braves, who put up another two-spot in their half. Joc Pederson drove in one with a forceout and Travis d'Arnaud delivered a two-out single to right to bring home another.

The Brewers decided not to use ace Corbin Burnes, who had gotten the win over Morton in Game 1. He was all set to go in Game 5 in Milwaukee.

Unfortunately for the Brewers, they don't play again until 2022.

"We're all really disappointed," manager Craig Counsell said. "In the end, we had big goals. We didn't quite get there. But we did win 95 games. It's a special group. They did accomplish some special things."

Milwaukee starter Eric Lauer made his first appearance of the series, but didn't get much farther than Morton. He went 3 2/3 innings, also charged with two runs on four hits.

The Braves may have had a bigger inning in the fourth if not for what appeared to be a blown call on Adam Duvall's popup.

Snitker tried to challenge, but the umpires told him that only fly balls and line drives to an outfielder are subject to a video review.

Things really got confusing when the scoreboard proclaimed the call was "Overturned," but that was an error on the operator.

The call stood, even through a replay appeared to show the ball bouncing off Narváez's catcher's mitt and barely striking the dirt just before third baseman Luis Urias grabbed the deflection.

Braves right fielder and leadoff hitter Jorge Soler was removed from the lineup shortly before the game after testing positive for COVID-19.

Soler was replaced at the top of the order by Swanson. Pederson, slated to start in left field, shifted to right. Guillermo Heredia was inserted in center field, batting eighth, and Duvall switched from center to left.

Soler was among the players acquired before the trade deadline as the Braves totally rebuilt their starting outfield. He hit a combined .223 with 27 homers and 70 RBIs with Kansas City and Atlanta during the regular season.

Soler had just one hit in 11 at-bats through the first three games against the Brewers.

Brewers: Begin the 2022 season at home against the Arizona Diamondbacks on March 31.

Braves: Open the NLCS on Saturday, with Max Fried set to make the start. If the Giants beat the Dodgers, the series would open in San Francisco. If Los Angeles prevails, the first two games would be in Atlanta. 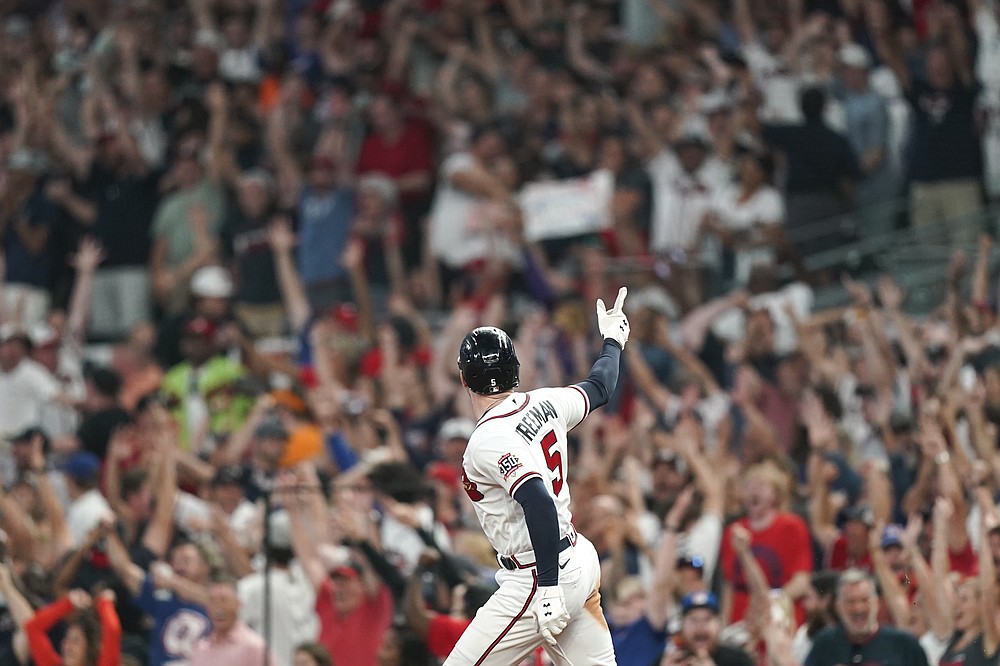 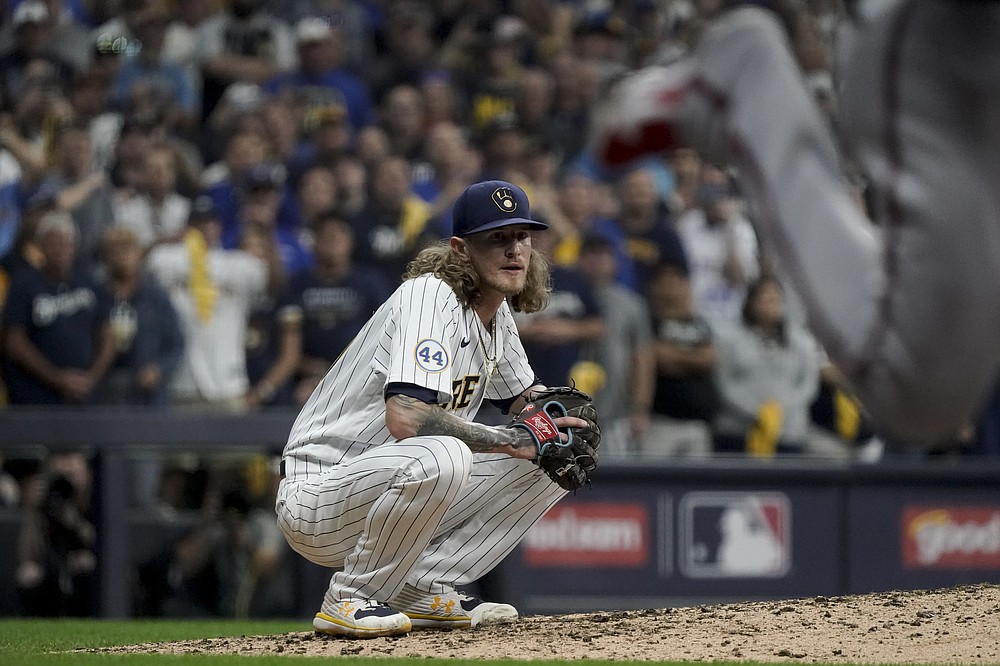 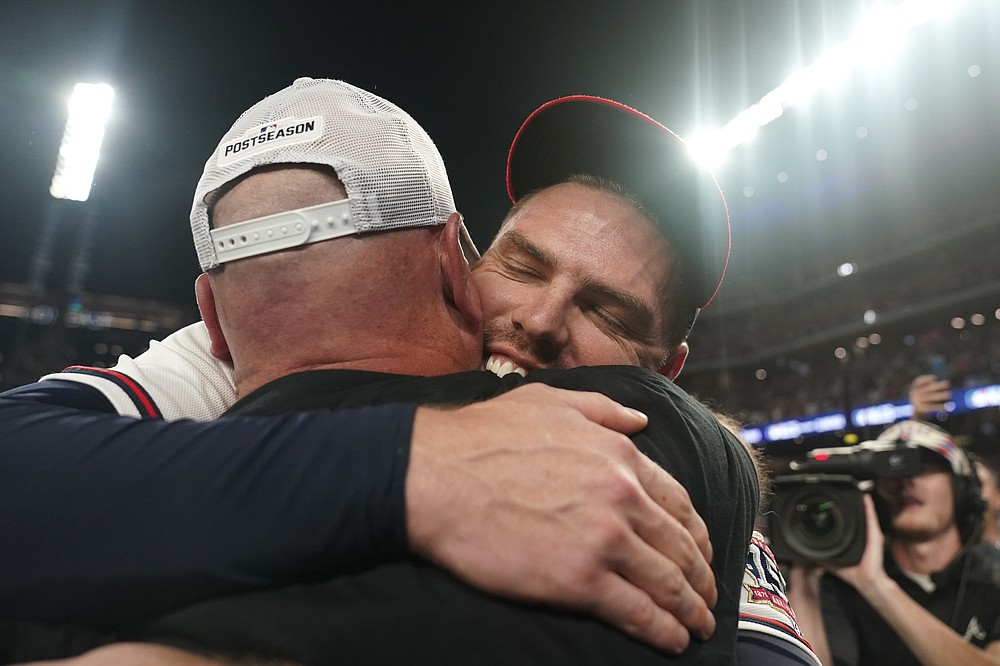 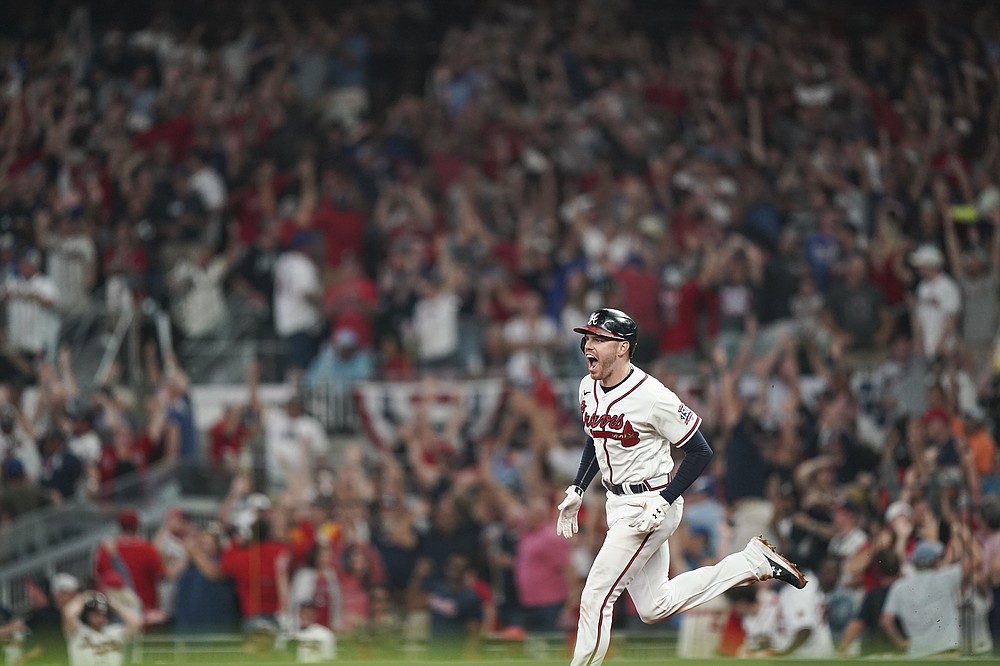 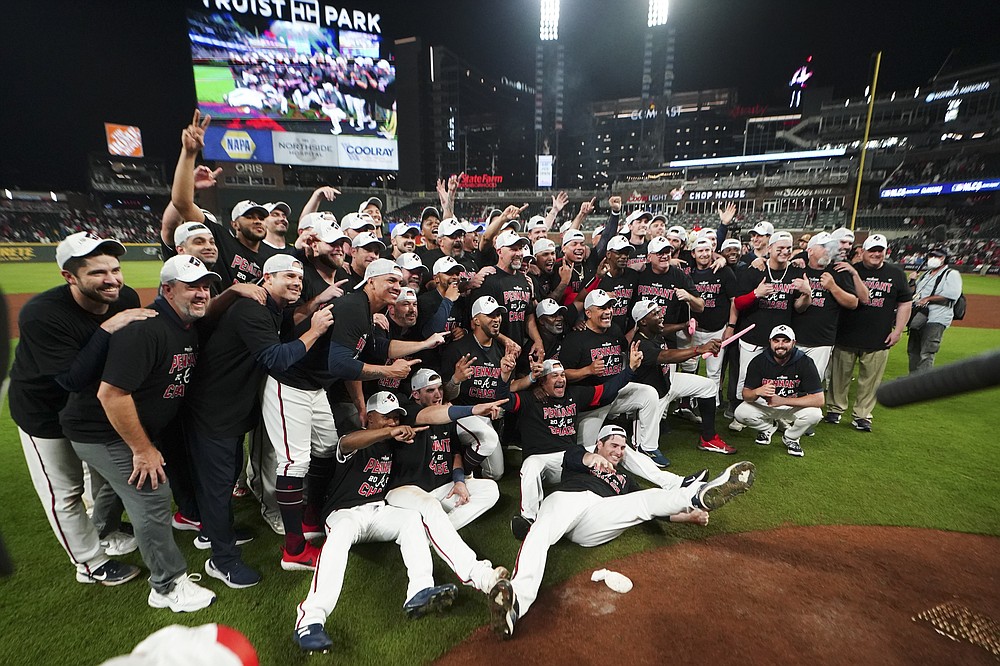 The Atlanta Braves pose fopr a photo after Game 4 of a baseball National League Division Series against the Milwaukee Brewers, Tuesday, Oct. 12, 2021, in Atlanta. The Atlanta Braves won 5-4 to advance to the NCLS. (AP Photo/John Bazemore) 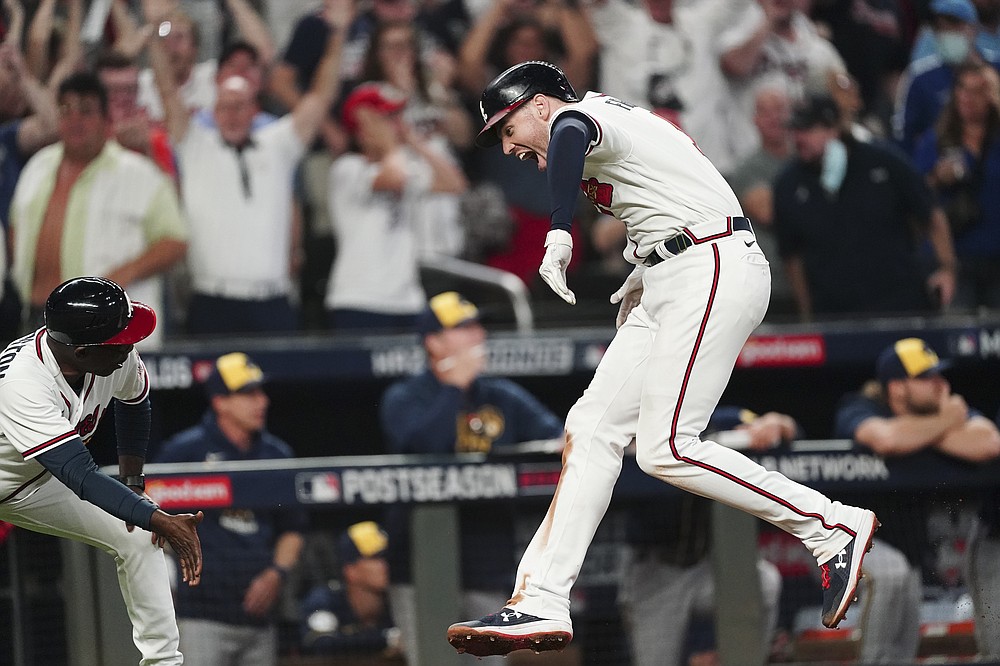 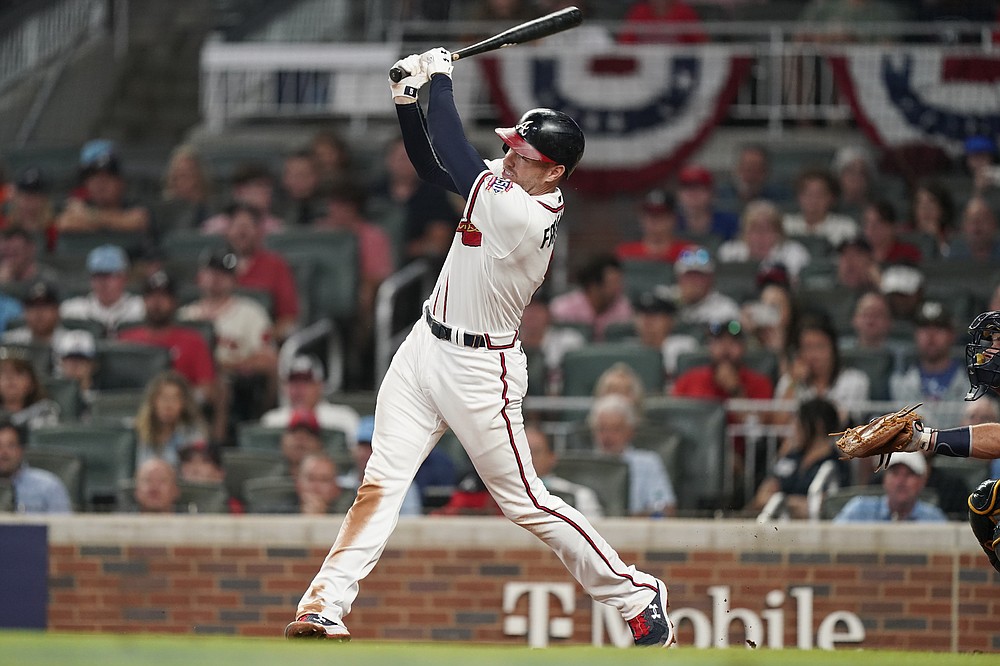 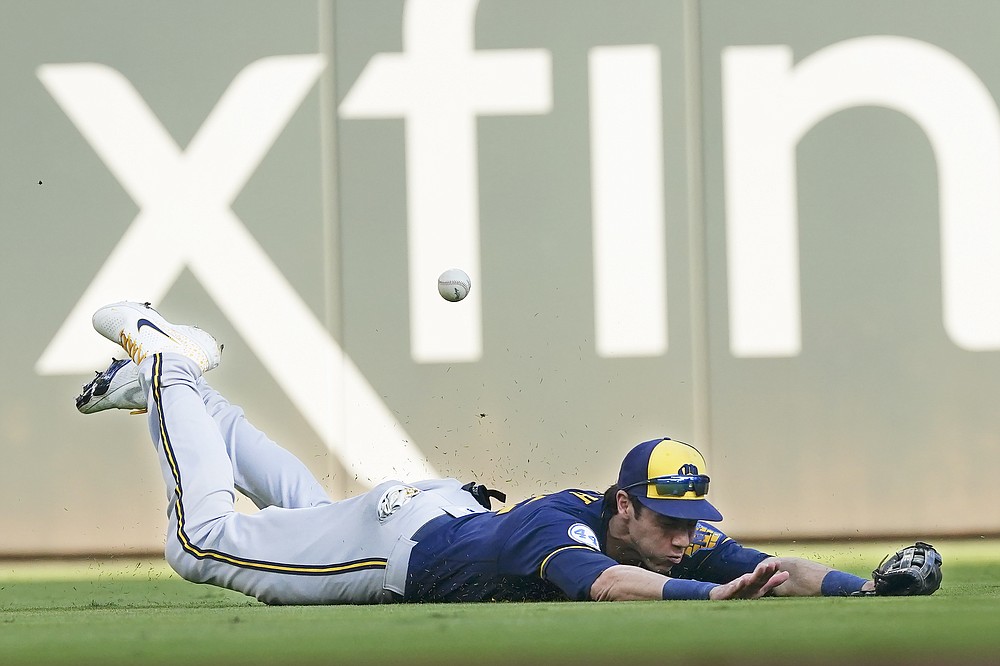 Milwaukee Brewers left fielder Christian Yelich (22) dives the for the ball hit by Atlanta Braves' Adam Duvall during the second inning of Game 4 of a baseball National League Division Series, Tuesday, Oct. 12, 2021, in Atlanta. Duvall made it to first base on the hit.(AP Photo/John Bazemore) 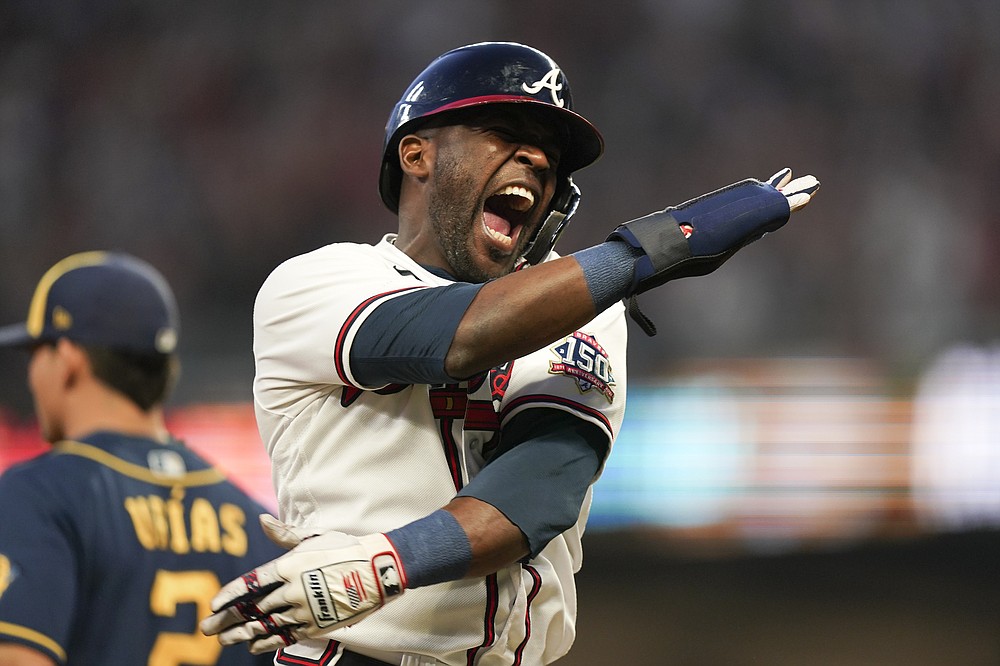