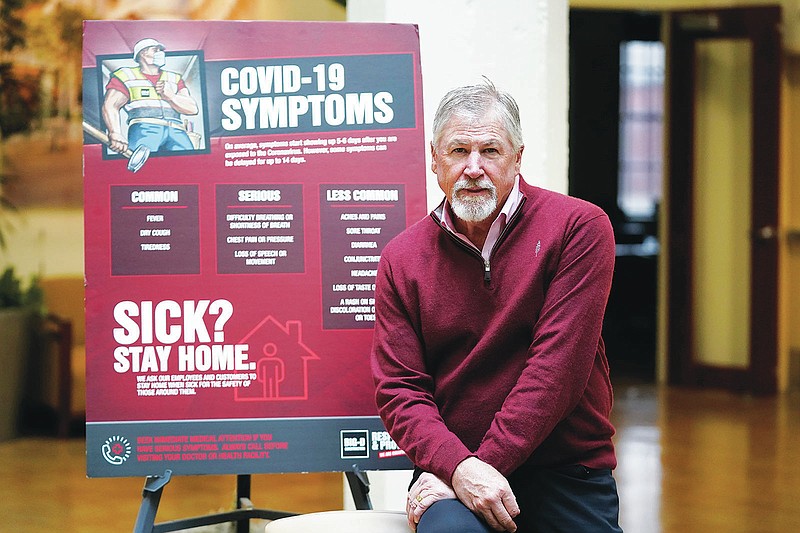 Rob Moore is the CEO of Salt Lake City-based Big-D Construction poses for a photograph Monday, Oct. 11, 2021, in Salt Lake City. Moore said he supports vaccines but has questions about the mandate rollout. He already has a worker shortage on his job sites, and he said employee surveys tell him that nearly 20% of his workers don't want to get inoculated, so they would need to be tested weekly. (AP Photo/Rick Bowmer)

SALT LAKE CITY -- With the governor of Texas leading the charge, conservative Republicans in several states are moving to block or undercut President Joe Biden's COVID-19 vaccine mandates for private employers before the regulations are even issued.

The growing battle over what some see as overreach by the federal government is firing up a segment of the Republican Party base, even though many large employers have already decided on their own to require their workers to get the shot.

The dustup will almost certainly end up in court since GOP attorneys general in nearly half of the states have vowed to sue once the rule is unveiled.

The courts have long upheld vaccine mandates, and the Constitution gives the federal government the upper hand over the states, but with the details still unannounced and more conservative judges on the bench, the outcome isn't entirely clear.

On Monday, Texas Gov. Greg Abbott issued an executive order barring private companies or any other entity from requiring vaccines. It was perhaps the most direct challenge yet to Biden's announcement a month ago that workers at private companies with more than 100 employees would have to get either vaccinated or tested weekly for the coronavirus.

"No entity in Texas can compel receipt of a COVID-19 vaccine by any individual ... who objects to such vaccination," Abbott wrote in his order.

White House officials brushed off Abbott's order, saying the question of whether state law could supersede federal was settled 160 years ago during the Civil War. They said they Biden administration will push through the opposition and put into effect the president's package of mandates, which could affect up to 100 million Americans in all.

"I think it's pretty clear when you make a choice that's against all public health information and data out there, that it's not based on what is in the interests of the people you are governing. It is perhaps in the interest of your own politics," she said.

Several large companies in Texas have already implemented their own vaccine mandates, and two Texas-based airlines, Southwest and American, indicated Tuesday they would follow the order of the Biden administration, saying federal action supersedes any state mandate or law.

Elsewhere, lawmakers in Arkansas have approved a measure creating vaccine-mandate exemptions. Though the GOP governor hasn't said whether he will sign it, it has prompted fears businesses will be forced to choose whether to break federal or state law.

"We are tying the hands of Arkansas businesses that want to make their own decision in how best to keep their people safe," said Randy Zook, president of the Arkansas Chamber of Commerce. Some of the state's largest companies, including Walmart and Tyson Foods, have required some or all employees get vaccinated.

Calls for special legislative sessions to counter vaccine mandates have been heard in states like Wyoming, Kansas and South Dakota, where Republican Gov. Kristi Noem is so far resisting calls to immediately consider a bill that would guarantee people could opt out.

"I hear from people almost daily who are going to lose their jobs, are living in fear," said Republican state Rep. Scott Odenbach, who has clashed with Noem on the issue. "They shouldn't have to choose between feeding their family and their own medical freedom."

In Indiana, Republican Gov. Eric Holcomb is also resisting a push from within his party to ban workplace vaccine mandates.

Bills are being introduced or drafted elsewhere too, including swing states like Ohio and New Hampshire, where the Republican sponsor was elected House speaker after his predecessor died of COVID-19.

"We have made it clear that government mandates are not the path to successful vaccination rates and will only cause further division in this country," Speaker Sherm Packard said last month.

In Utah, lawmakers have not taken action, but a record-setting crowd of over 600 people packed a legislative hearing room last week.

Rob Moore, CEO of Salt Lake City-based Big-D Construction, said he supports vaccines but has questions about the mandate rollout. He already has a worker shortage on his job sites, and he said employee surveys tell him that nearly 20% of his workers don't want to get inoculated, so they would need to be tested weekly.

"That's heavy on our mind right now. I don't know if the federal government has thought through that all that well. The cost is going to be enormous," he said.

In other sectors, vaccine requirements have gone smoothly. In Utah, the NBA's Jazz is making its employees get vaccinated. It is also requiring fans at games to show proof of vaccination or a negative COVID-19 test. So far, just a few ticket refunds have been needed, and the season opener is expected to be sold out by next week, said Jazz spokesman Frank Zang.

"I think there's understanding of what's at stake here, in terms of having a safe environment for people to enjoy sports and concerts and shows again," he said.

While the conservative legislative push may not ultimately succeed in blocking the mandates, it could be a stumbling block and could prove to be another factor pushing the GOP further right.

Mike Meckler, a conservative activist from Texas who helped found the tea party a decade ago, said the mandate issue is firing up younger people. He summed up the mood among activists as: "If you're not with us, then you're with the fascists."