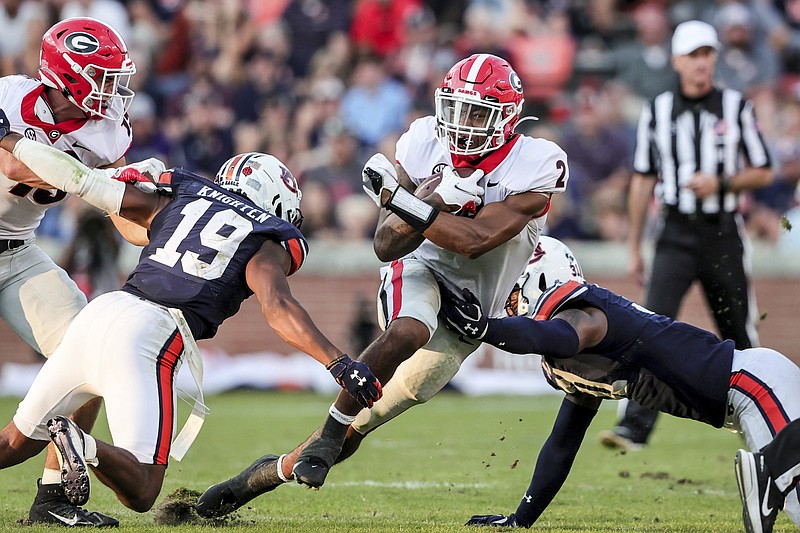 Georgia running back Kendall Milton (2) carries the ball as he splits Auburn safety Bydarrius Knighten (19) and linebacker Chandler Wooten (31) during the second half of an NCAA college football game Saturday, Oct. 9, 2021, in Auburn, Ala. (AP Photo/Butch Dill)

No. 1 Georgia faces No. 11 Kentucky on Saturday, the third straight game for the Bulldogs against a ranked Southeastern Conference opponent.

Georgia won the first two games by a combined score of 71-10, and the oddsmakers don't expect this one to be all that much closer.

After being favored by 18 1/2 points against Arkansas and by 15 1/2 at Auburn, the Bulldogs are now more than a three-touchdown favorite against Kentucky, the only other unbeaten team in the SEC.

Seems a bit dismissive of the Wildcats, who the past two weeks have taken down traditional SEC heavyweights Florida and LSU at home.

Really, it's a statement about Georgia's early season dominance, especially on defense. The Bulldogs are currently allowing 5.5 points per game. The last major college football team to allow fewer points per game over a full season was Alabama in 1979 at 5.3.

There is still half a regular season left for Georgia that includes some of the better offenses in the SEC such as Florida, Missouri and an improving Tennessee. An SEC championship matchup with Alabama's powerful offense is also still very possible if not likely.

As for Kentucky, the Wildcats are positioned to have one the best seasons in school history. They will get be greeted in Athens, Georgia, by ESPN's "College GameDay" and will play in the SEC's premier TV position on CBS at 3:30 p.m. EDT.

The rankings and records warrant the hype, but it will take a monumental effort by the Wildcats for the game to live up to it.

The picks with lines provide by FanDuel Sportsbook:

Ducks had an open date to stew over that loss to Stanford and get healthy ... OREGON 31-20.

Boilermakers have not cracked 13 points in any of their last three games ... IOWA 26-13.

Spencer Rattler or Caleb Williams at quarterback for the Sooners? The answer seems obvious but coach Lincoln Riley has been coy ... OKLAHOMA 41-23.

Spartans RB Kenneth Walker III leads the nation in rushing and has more runs of at least 10 yards (26) than any player in the country ... MICHIGAN STATE 28-21, BEST BET.

Can the Cowboys and the Big 12's best defense keep the Longhorns down after a crushing Red River collapse? ... TEXAS 27-23.

Rebels' Lane Kiffin returns to Knoxville as a head coach for the first time since his one season leading the Vols in 2009 ... MISSISSIPPI 45-35.

Bears offensive coordinator Jeff Grimes was with BYU the last three seasons and has turned around Baylor's offense ... BAYLOR 27-24.

Tigers have won seven of the last nine meetings, but the former Big 12 rivals have only played three times since joining the SEC and not since 2014 ... TEXAS A&M 35-23.

Gophers have lost their top two tailbacks to injury ... NEBRASKA 21-14.

Wildcats won't have a better opportunity to snap the nation's longest losing streak at 17 games ... ARIZONA 21-17. 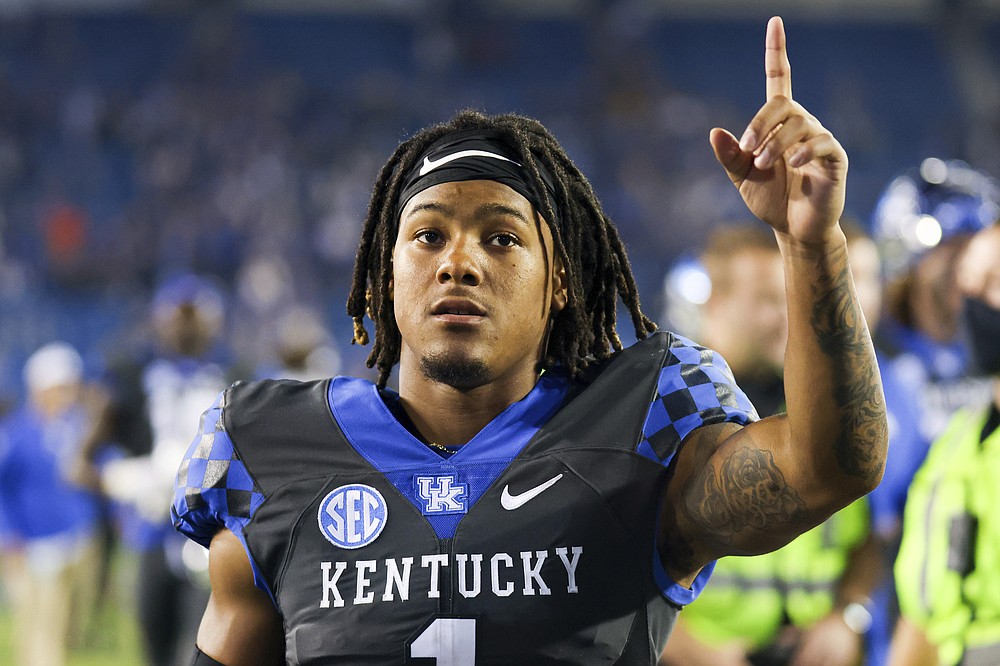 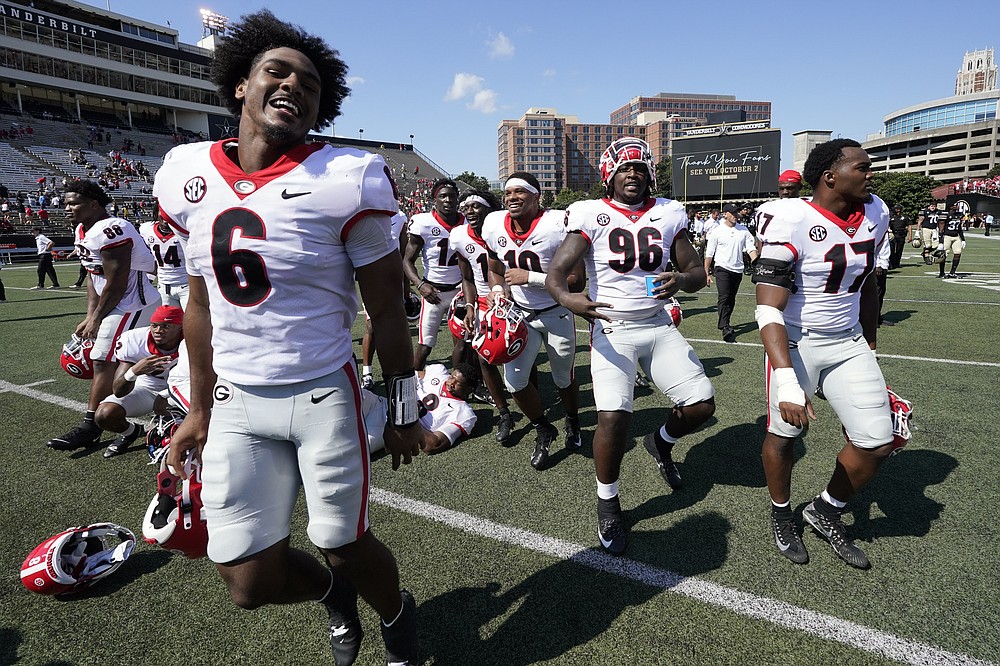 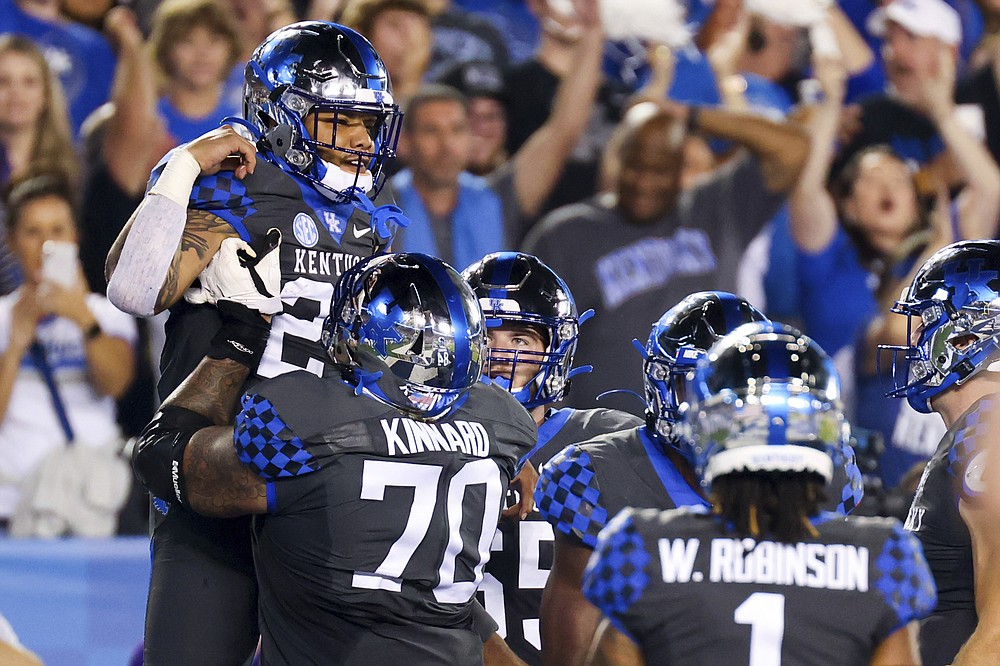 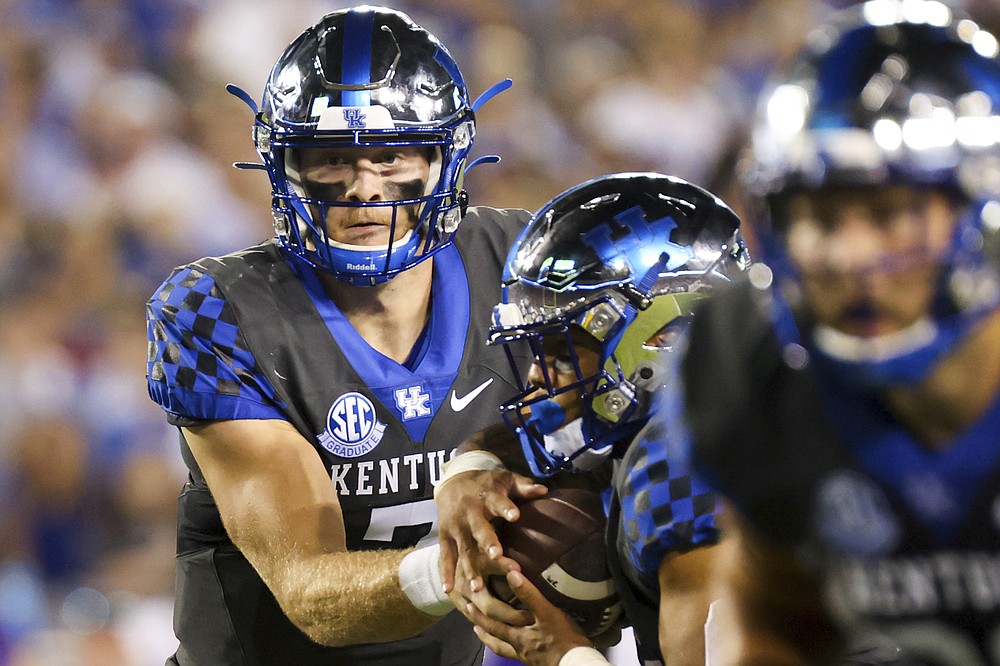 Kentucky quarterback Will Levis (7) hands the ball off during the first half of the team's NCAA college football game against LSU in Lexington, Ky., Saturday, Oct. 9, 2021. (AP Photo/Michael Clubb)