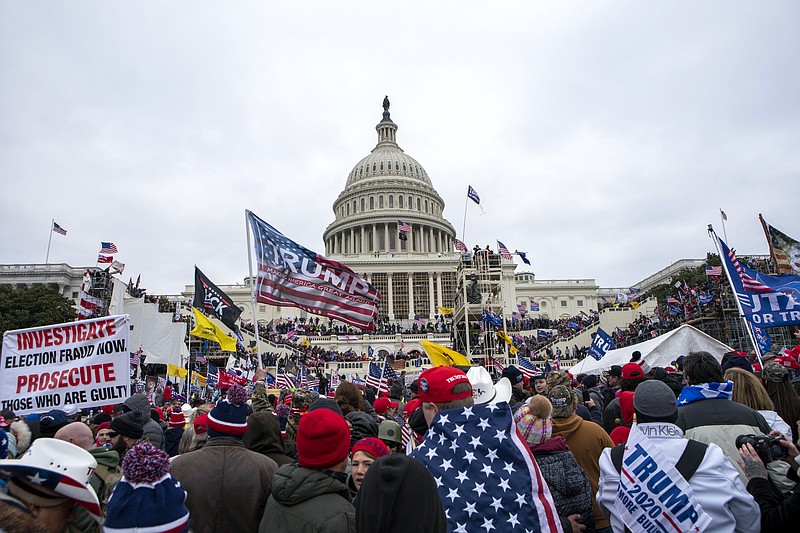 FILE - In this Jan. 6, 2021, file photo insurrections loyal to President Donald Trump rally at the U.S. Capitol in Washington. A federal judge held the director of the District of Columbia&#x2019;s Department of Corrections and the warden of the city&#x2019;s jail in contempt of court on Wednesday, Oct. 13, and asked the Justice Department to investigate whether the civil rights of inmates are being abused. U.S. District Judge Royce Lamberth had hauled the jail officials into court as part of the criminal case into Christopher Worrell, a member of the Proud Boys who has been charged in the Jan. 6 attack at the U.S. Capitol. (AP Photo/Jose Luis Magana, File)

WASHINGTON -- In a case involving a Jan. 6 Capitol riot defendant, a federal judge held the District of Columbia's corrections director and jail warden in contempt of court Wednesday and asked the Justice Department to investigate whether inmates' civil rights are being abused.

U.S. District Judge Royce Lamberth had summoned the jail officials as part of the criminal case into Christopher Worrell, a member of the Proud Boys who has been charged in the Jan. 6 attack. Capitol. He has been accused of attacking police officers with a pepper spray gel and prosecutors have alleged he traveled to Washington and coordinated with Proud Boys leading up to the siege.

"It's clear to me the civil rights of the defendant were violated by the D.C. Department of Corrections," Lamberth said. "I don't know if it's because he's a January 6 defendant or not."

The judge ordered Quincy Booth, the director of the city's Department of Corrections, and Wanda Patten, the warden of the DC Jail, to be held in contempt of court. While he did not impose any sanctions or penalties the judge said he was referring the matter to the Justice Department to investigate whether the civil rights of the inmates in the jail are being violated.

The move is likely to add steam to claims by activists and supporters of former President Donald Trump who have argued that defendants are being treated unfairly while they're locked up. The Associated Press reviewed hundreds of court and jail records for the Capitol riot defendants to uncover how many were being detained and found roughly 70 held in federal custody awaiting trial or sentencing hearings. At least 30 are jailed in Washington. The rest are locked up in facilities across the country.

Supporters of those jailed in Washington held a rally on Sept. 18, where they sought to highlight what they said were the disturbing treatment of suspects behind bars there.

A federal law known as the Civil Rights of Institutionalized Persons Act -- commonly called CRIPA -- allows prosecutors to review conditions of jails, prisons and other government-run facilities to identify if there is a systemic pattern of abuse or civil rights violations.

A spokesperson for the Department of Corrections did not respond to a message seeking comment on Wednesday.

The judge's ruling in Worrell's case comes after he found there was more than an "inexcusable" delay of jail officials turning over medical documents. Worrell, who broke his wrist in May, had been recommended for surgery in June but still hasn't undergone the procedure.

After the judge learned last week that the surgery still hadn't happened, he ordered the jail system to turn over notes to the U.S. Marshals Service -- because Worrell is a federal inmate housed in the local jail -- so the Marshals Service could move forward and approve the medical procedure. But on Tuesday, the jail still hadn't sent the records and the judge ordered the city jail officials to appear in court for a contempt hearing.

A lawyer for the jail had argued that they had been working to get the records together to comply with the court's order before the contempt hearing was set.

"He's needed an operation. He hasn't gotten it," the judge said.

The judge had separately chastised city officials for cutting down the number of rooms in the jail for virtual court visits and for sending an inmate to his court a few weeks ago when they did not have the results of a coronavirus test, saying the "incompetence of jail officials" led to the prisoner being sent back and forth from court without appearing before the judge.

The U.S. Court of Appeals for the District of Columbia Circuit has set standards for judges to apply in deciding whether to jail a Capitol riot defendant. A three-judge panel of the appeals court ruled in March that rioters accused of assaulting officers, breaking through windows, doors and barricades, or playing leadership roles in the attack were in "a different category of dangerousness" than those who merely cheered on the violence or entered the building after it was breached.

Defendants ordered locked up while they await trial include a man accused of dragging a police officer down steps to be beaten by an American flag and another man accused of leading a group of rioters up the Capitol steps to confront officers. But there are more than 630 people people charged in the Jan. 6 melee.

Judges have released the vast majority of the defendants, including more than a dozen members and associates of the Oath Keepers, a far-right group, who are charged in perhaps the most serious case brought so far in the attack.

Separately on Wednesday, a judge went against the recommendation of prosecutors and sentenced two cousins who joined the mob at the Capitol and posed for photos on top of a military-style government vehicle outside to 45 days behind bars.

Robert Bauer, of Cave City, Kentucky, and Edward Hemenway, of Winchester, Virginia pleaded with the judge for leniency, saying their actions have already had serious consequences in their lives. They both admitted to a misdemeanor charge of parading inside the Capitol.

"There's really no words to express how categorically wrong I was that day," said Bauer, who was inside the Capitol with his cousin for about 17 minutes. Prosecutors had been seeking 30 days in jail.

U.S. District Judge Tanya Chutkan told the men that they were not being punished for their political beliefs, but for turning their protest into a "violent occupation of the U.S. Capitol" at a time when the country was "attempting the peaceful transfer of power -- something that has never been interrupted in this country's history."

Later Wednesday, a different federal judge sentenced a New Hampshire man to two years of probation for joining the riot. A prosecutor had recommended a sentence of one month of home confinement and three years of probation for Thomas Gallagher, who apologized to Congress, the FBI and the police officers at the Capitol on Jan. 6 "for any anxiety that I caused them, any fear."

U.S. District Judge Carl Nichols said there is no evidence that Gallagher engaged in any violence or destruction on Jan. 6. But the judge said it should have been obvious to Gallagher that he was in the middle of a violent riot.

"Protesting in the Capitol in a manner that delays the certification of the election throws our entire system of government in disarray," Nichols said. 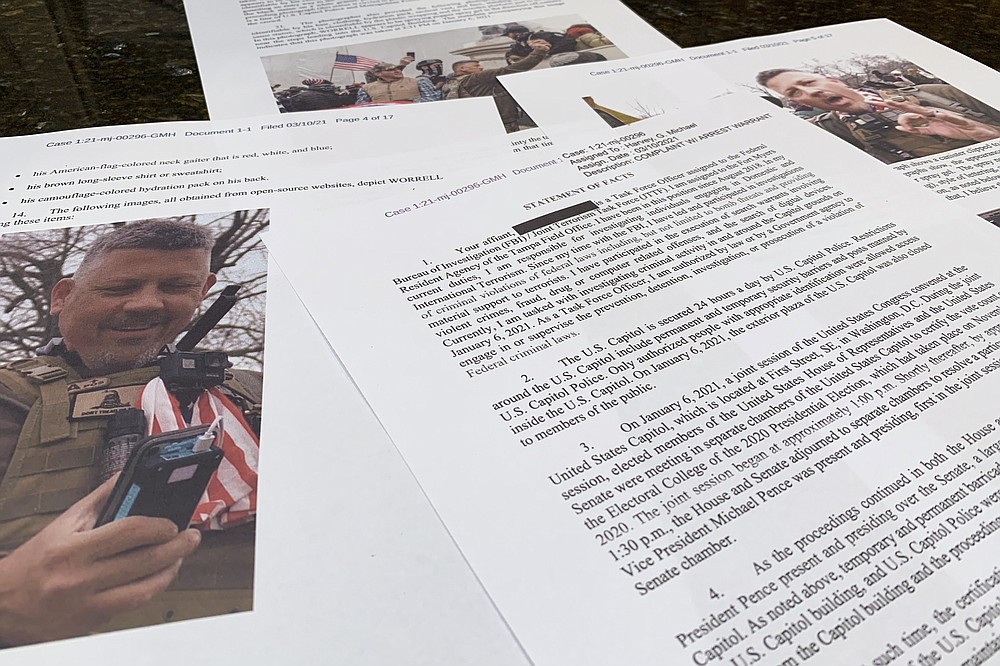 This photo shows part of the Justice Department's statement of facts in the complaint and arrest warrant for Christopher Worrell. In a case involving the Jan. 6 Capitol riot defendant, U.S. District Judge Royce Lamberth held the District of Columbia's corrections director and jail warden in contempt of court on Oct. 13, and asked the Justice Department to investigate whether inmates' civil rights are being abused. Lamberth had summoned the jail officials as part of the criminal case into Worrell, a member of the Proud Boys who has been charged in the Jan. 6 attack. Capitol. He has been accused of attacking police officers with a pepper spray gel and prosecutors have alleged he traveled to Washington and coordinated with Proud Boys leading up to the siege. (AP Photo/Jon Elswick)