Oldies but goodies: The Lakers may be ones to catch in West 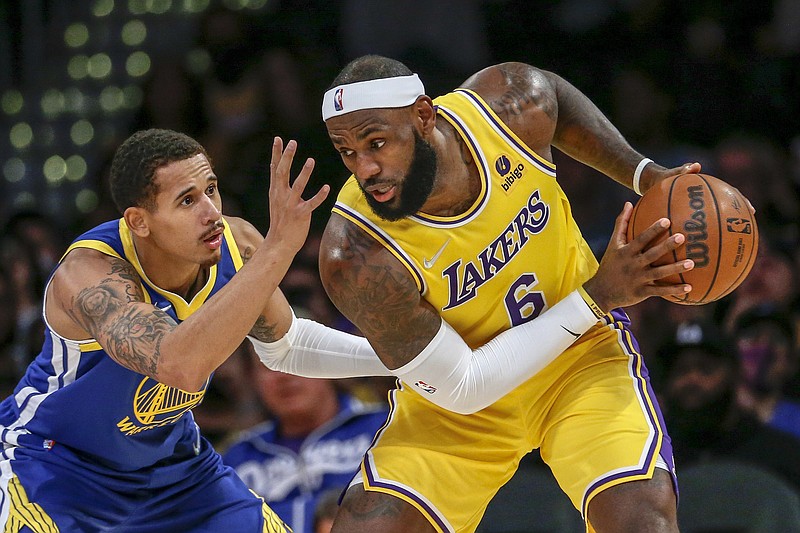 Given all that talent -- LeBron James leading the way, with a half-dozen players on the roster with at least reasonable chances of one day being elected to the Basketball Hall of Fame -- it's easy to see why the Lakers would be a fashionable pick to emerge as the Western Conference representative in the NBA Finals this season.

"I'm excited for what's in store for us this year," James said. "But every day is a process. Every day, it's all about the journey and then you just put in the work."

James and Anthony Davis are back from the team that won the 2020 NBA championship -- two seasons, yet only 12 months ago. Talen Horton-Tucker was also on that team, but didn't play in the NBA Finals. Everyone else is new, or sort of new, to the Lakers.

Rajon Rondo and Dwight Howard were on that team, left the Lakers and since returned. Russell Westbrook, Carmelo Anthony and DeAndre Jordan were among those added this offseason.

Anthony, Trevor Ariza, James, Howard and Rondo are all 35 or older already, and Wayne Ellington -- another newcomer -- turns 34 in November.

"The narrative about our age, I kind of laugh at it," James said. "I really do laugh. I'm not just saying that."

Even with all that proven talent, the Lakers are no lock to get back to the finals. A look at the West, in predicted order of finish:

1. Los Angeles Lakers. Old, yes. Good, yes. Really good ... time will tell. James convinced players like Anthony and Westbrook to run with him, which suggests he's loading up for a title run.

4. Denver Nuggets. Michael Malone remains one of the league's underrated coaches. Reigning MVP Nikola Jokic is all-worldly good, Jamal Murray will be back and Denver's defense gives it a chance every night.

5. Golden State Warriors. Stephen Curry was MVP-level good last year. Klay Thompson's return will be a big lift whenever it happens. Andre Iguodala returns for his final season. There's nothing not to like here.

6. Dallas Mavericks. Luka Doncic just keeps getting better and better. New coach Jason Kidd, who won a title in Dallas as a player, will have this team scoring a ton of points. The wild-card: Kristaps Porzingis.

7. Los Angeles Clippers. The Clippers might do just enough to get into the playoff mix, then get a healthy and well-rested Kawhi Leonard back from his knee rehab for the stretch run. A scary proposition for opponents.

8. Portland Trail Blazers. Damian Lillard is as good of a scorer and leader as there is in the game, and surely will benefit from being part of the Olympic team this summer. Blazers must -- must -- take a leap forward.

9. San Antonio Spurs. The easiest thing Gregg Popovich could have done was take his Olympic gold medal, retire and enjoyed wine for the rest of his life. He came back for a reason. Don't forget the Spurs.

10. Memphis Grizzlies. Steven Adams playing pick-and-roll with Ja Morant should lead to automatic scores. And Morant is on his way to elite, without question. But the Grizzlies are still so very young.

11. New Orleans Pelicans. Zion Williamson is the key to everything. If he's great, they'll be higher.

12. Sacramento Kings. This is way too low for the Kings. Then again, the West is also that good.

13. Minnesota Timberwolves. This is the T'Wolves fate -- unless they are winners of the Ben Simmons Trade Sweepstakes.

14. Houston Rockets. Jalen Green is going to put up enormous numbers and contend for top rookie.

15. Oklahoma City Thunder. At some point, the basketball world will learn what all those draft picks will become.

FanDuel Sportsbook also lists the Lakers as the pick to come out of the West, since the Lakers are the second-choice behind Brooklyn when it comes to NBA title odds. The other top five NBA Finals contenders in the West, in order, based on FanDuel odds: Golden State, Utah, Phoenix, then the Clippers.

When just betting on the West race, the order is a bit different with a top five of the Lakers, Golden State and the Clippers tied for second, followed by Utah and Phoenix.

There has never been a stretch of four consecutive international MVPs in the NBA. That might change this year, if a couple of West stars do what many expect they will. Milwaukee's Giannis Antetokounmpo won in 2019 and 2020, Jokic won in 2021, and Jokic and Doncic have to be considered among the frontrunners in 2022.

The last shot James took in the 2020-21 regular season was a made layup with 6:41 left in the season finale against New Orleans, giving him 25 points. He was subbed out six seconds later and didn't return. The significance was this: It gave James a scoring average of 25.02 points for the season -- extending his record streak of 25-point-average seasons to 17 in a row. Had he not gotten that final basket, he'd have averaged 24.98 points and (technically, anyway) the streak would have ended.

The champs may hail from Milwaukee and the Eastern Conference, but the Western Conference -- again -- won the head-to-head against the other side of the league last season. West teams won 54% of their games against the East. It marked the 12th straight season and 21st time in the last 22 years that the West held a edge over the East. 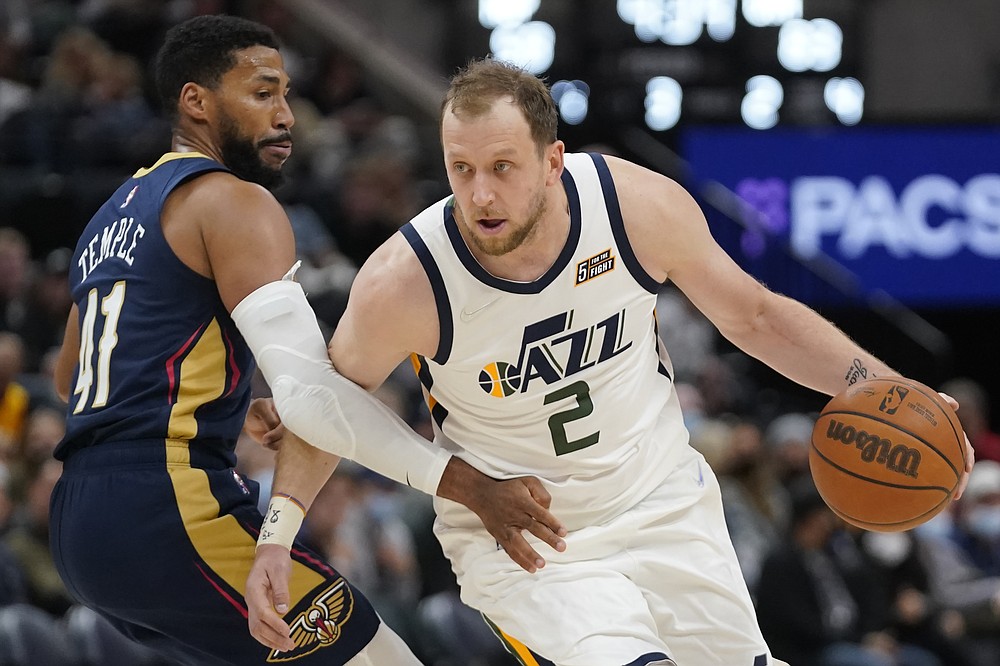 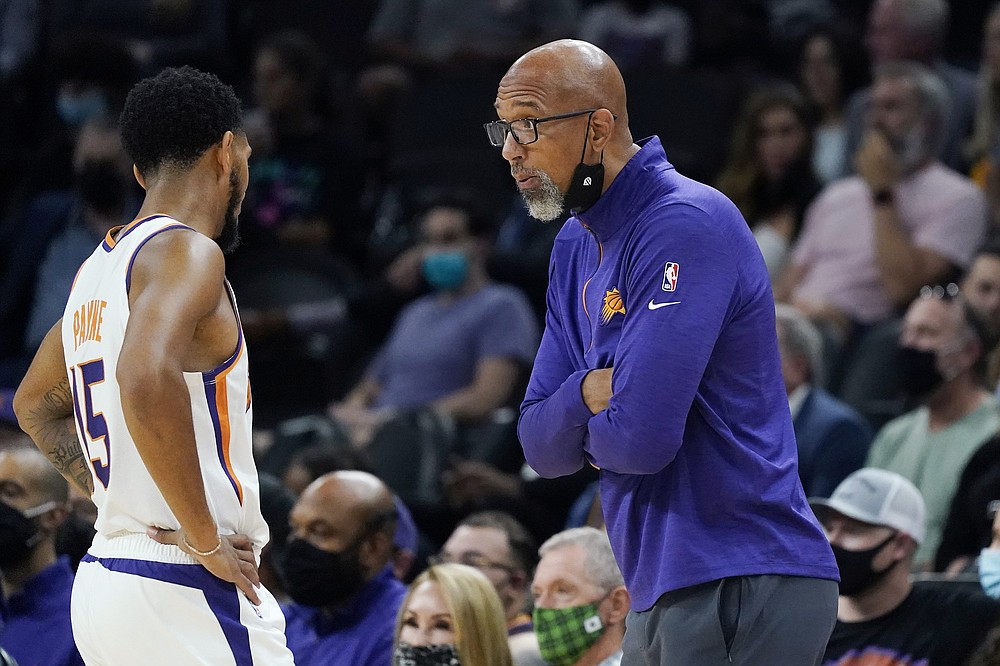 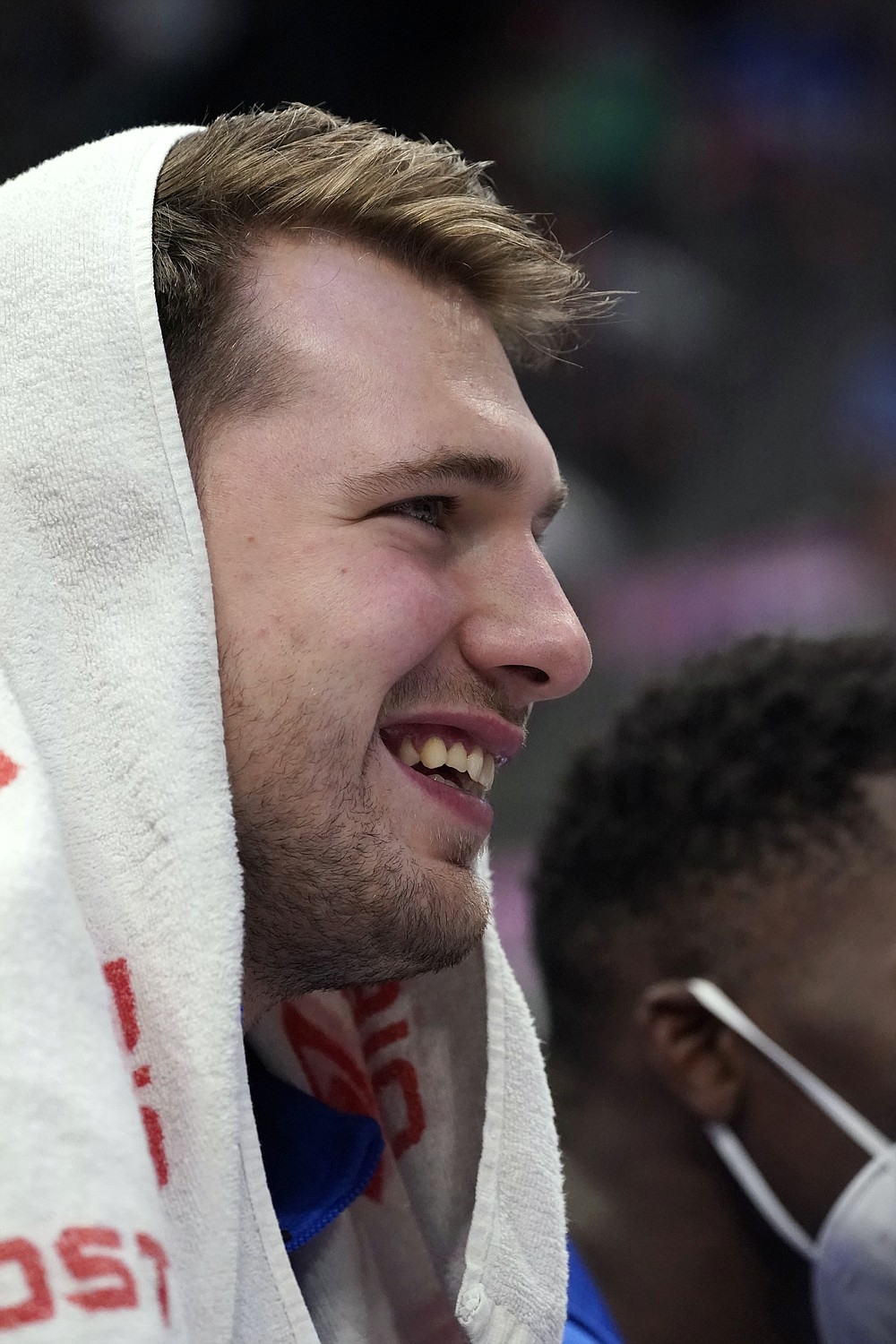 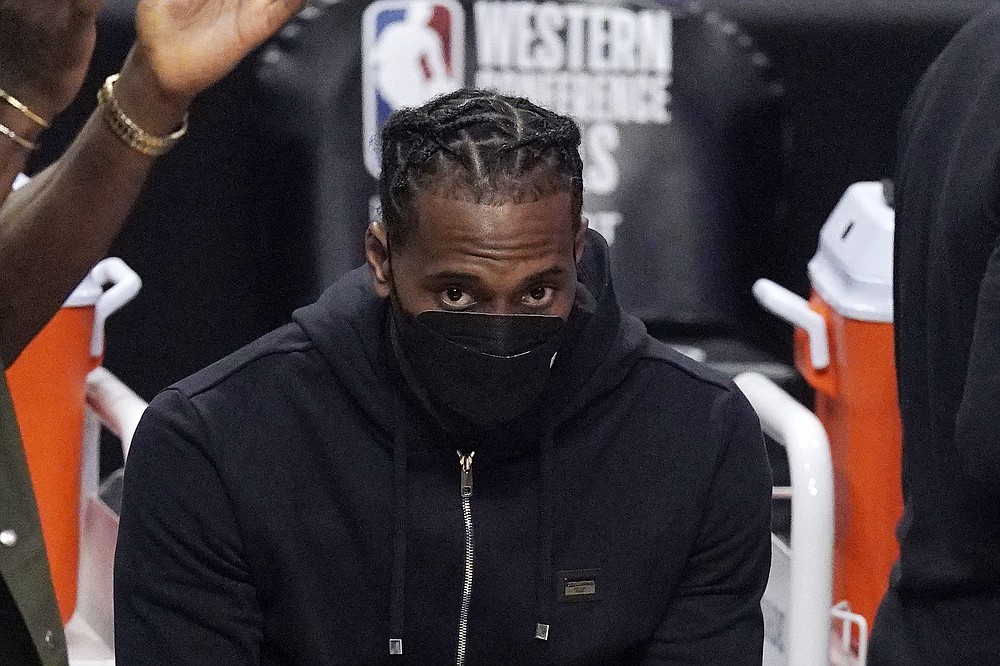 FILE - Los Angeles Clippers forward Kawhi Leonard sits on the bench during the first half in Game 6 of the NBA basketball Western Conference Finals against the Phoenix Suns in Los Angeles, in this Wednesday, June 30, 2021, file photo. The biggest question hanging over the Clippers is when Leonard will return. Will he work his way back from knee surgery to repair a partially torn ACL before the end of the regular season? Or for the playoffs? Or remain out until next season? Even he isn't sure. (AP Photo/Mark J. Terrill, File) 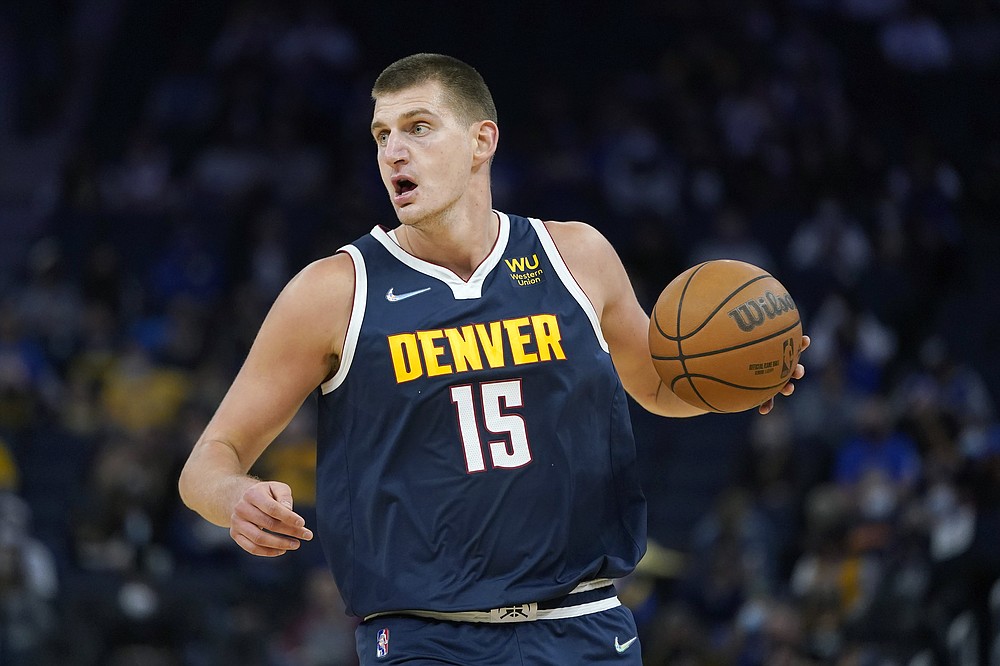 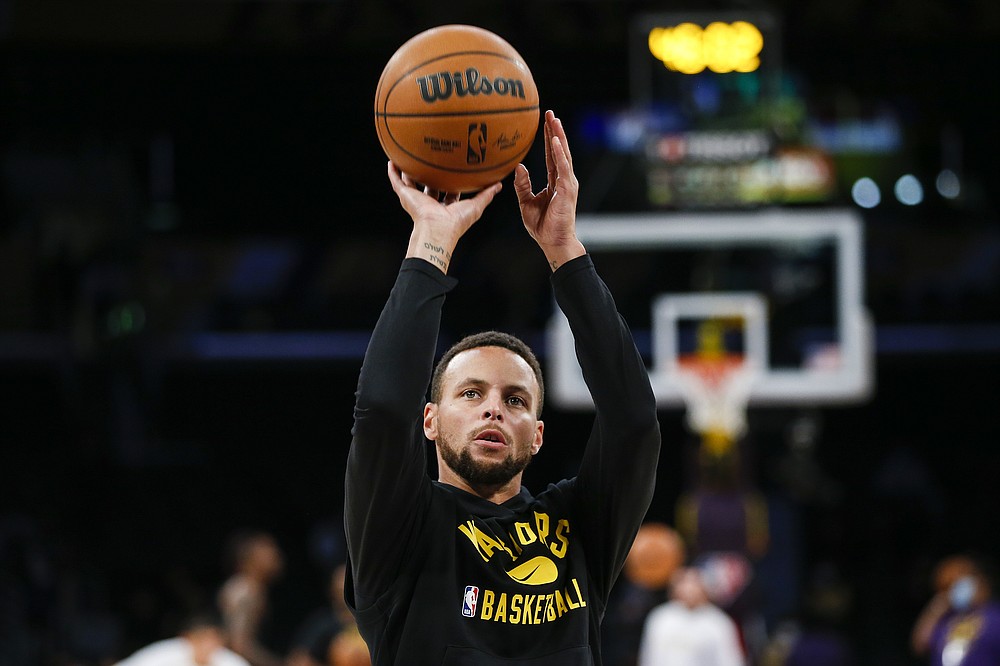 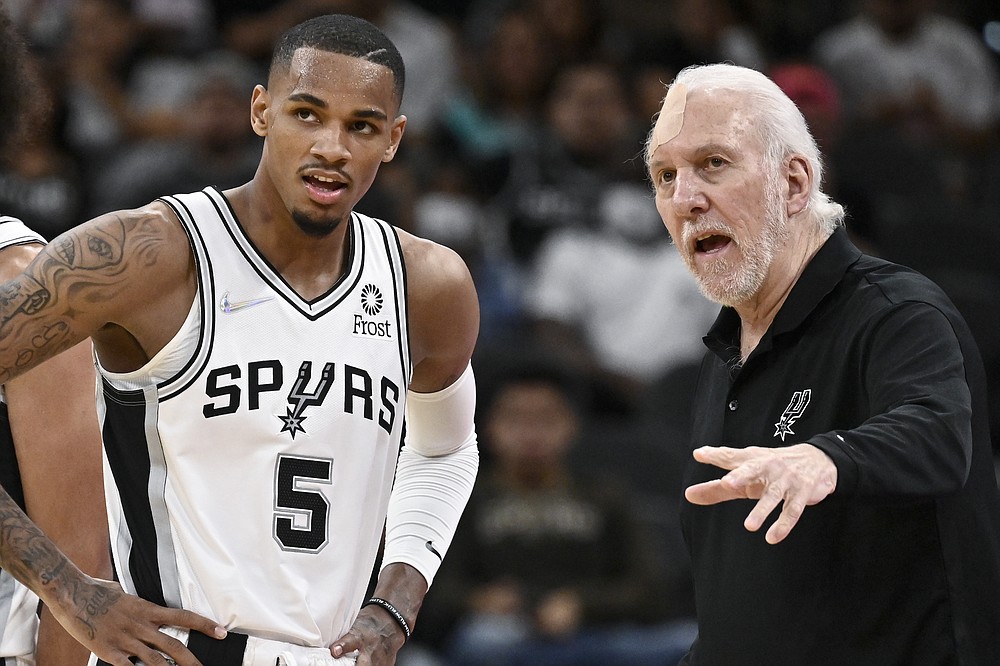 Print Headline: Oldies but goodies: The Lakers may be ones to catch in West