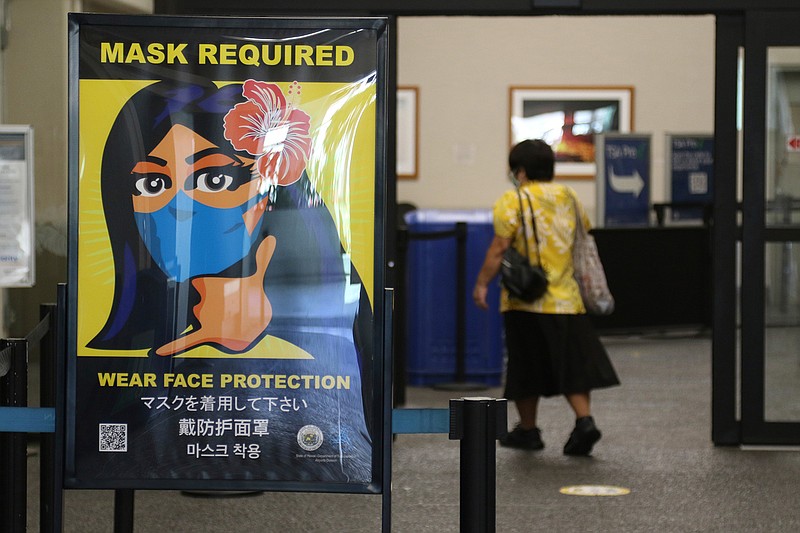 FILE - In this Oct. 2, 2020 file photo, a woman walks into the international airport in Honolulu. (AP Photo/Caleb Jones, File)

MIAMI -- New Biden administration travel restrictions aimed at preventing the unvaccinated from coming to the United States will be felt particularly hard in Latin America and the Caribbean, a region where wide disparities and lack of access to COVID-19 vaccines have left most of the population without protection against the deadly virus.

The new rules, which White House COVID-19 coordinator Jeff Zients said will begin in early November, could also prohibit some vaccinated travelers from entering the country if they have received shots from vaccine makers that are not recognized by the World Health Organization.

The White House said last month that it was considering banning travelers who received COVID-19 vaccines that have not received emergency authorization from the WHO. The U.S. has only authorized three vaccines -- Pfizer, Moderna and Johnson & Johnson -- but the WHO's emergency use list is much wider and includes vaccines produced by AstraZeneca and China's Sinopharm. But it currently does not include Russia's Sputnik V nor Cuba's Soberana, which some countries in the region have used to augment their vaccine supplies.

A spokesperson with the U.S. Centers for Disease Control and Prevention said the agency "is actively working with vaccine experts regarding which vaccinations will be accepted [and] age that the requirements will start to apply."

The CDC will provide more information about the requirements in the coming weeks, she said.

European and Brazilian travelers, who have been shut out of the U.S. for more than a year, will likely welcome the measure, but others are dreading it due to its potential effect on regional travel in the Americas.

Whatever decision U.S. authorities make would leave many Latin Americans and Caribbean nationals shut out of the United States at a time when visa approvals have already been backlogged over COVID-19 and restrictive embassy staffing, and could likely create more diplomatic friction in a region already feeling ignored by its closest, most powerful neighbor.

"It disproportionately affects the developing countries like Guyana," said Oneidge Walrond, the South American nation's minister of Tourism and Commerce, who fears that Sputnik will not make the U.S. approved list.

Believing vaccination was the only way out of the pandemic, Guyana earlier this year turned to the Russian-made vaccine, purchasing 200,000 doses at $20 each, after being unable to secure any of the U.S.-made vaccines. Even though it has joined a number of Caribbean countries in passing similar COVID entry requirements for international visitors -- one must show proof of vaccination and a negative COVID-19 PCR test taken within 7 days of travel -- the country believes they will now be punished by the U.S.'s new requirement after being unable to get other vaccines.

"We think it's unfair and highlights and deepens the divide between the haves and have-nots," Walrond said.

On Wednesday, the Pan American Health Organization's director, Dr. Carissa F. Etienne, said only 37 percent of the 653 million people in Latin America and the Caribbean have been vaccinated, while countries like Nicaragua have yet to reach 10 percent. Haiti, which has only administered about 75,220 doses of U.S-donated Moderna vaccines, has less than 1 percent of its population vaccinated.

With many people lacking access to vaccines, the U.S. this summer began shipping 40 million doses to the region, mostly through the WHO vaccine global access platform known as COVAX. But tensions over the availability of shots in one of the world's hardest-hit regions have already flared even among partners like Colombia, which has already received six million doses donated by the U.S. In his speech at the recent United Nations General Assembly, Colombian President Iván Duque spoke of the "unprecedented" gaps in vaccination coverage, adding a veiled criticism of the U.S. boosters plan.

"While some nations acquire additional doses for six or seven times [the size of their] population and announce third booster doses, others have not applied a single dose that gives them hope," he said.

Millions of people in the region have gotten vaccines produced by Russia, China, India and Cuba that have not received WHO emergency authorization. The rules will also spotlight regional inequities, as the poorest countries struggle to vaccinate their citizens amid low supply and vaccine hesitancy, and international efforts like COVAX remain slow in delivering promised doses.

"We continue to urge countries with surplus doses to share these with countries in our region, where they can have a life-saving impact," Etienne said. She said PAHO, which is the World Health Organization's Americas regional office, was trying to accelerate vaccinations in the Americas, including purchasing vaccines and ramping up vaccine manufacturing in the region.

Though COVAX was set up to help poor and middle-income countries secure vaccine doses at lower prices, PAHO's assistant director, Dr. Jarbas Barbosa, said it will not meet the goal to provide enough vaccines to immunize 20 percent of the population of participating nations.

Cubans are in a particularly tough spot because the government declined to participate in COVAX and developed its own vaccines instead. The government also has not taken the U.S. up on an offer to accept vaccine donations, two senior Biden administration officials said last week.

After a year and a half of government-imposed restrictions on foreign travel, many Cubans are looking forward to visiting family and friends abroad when airports open up mid-November. Still, they will likely face a new hurdle to come to the U.S., as the vast majority of Cubans are receiving locally produced shots of Soberana and Abdala.

A minority of the population is getting the Chinese-manufactured Sinopharm vaccine that has WHO emergency approval. Cuban authorities said the island was leading the vaccination efforts in the region, with 80 percent of its 11.3 million population having received at least one dose. However, only 56 percent is fully immunized because Cuba's vaccination program requires three doses with a space of several weeks among shots.

The U.S. rule can put additional hurdles on Cuba's plans to export its vaccines. So far, the country has shipped vaccines to Venezuela and Nicaragua and signed a contract to sell 10 million doses to Vietnam.

The Finlay Institute, the Cuban state manufacturer of the Soberana vaccines, is already in contact with WHO to seek the agency's approval. Dr. Vicente Verez Bencomo, the Institute's director, said the government was investing in bringing the production plant standards to meet the requirements for export.

In Cuba, the Dominican Republic and other countries in the region, people have had little choice on which vaccine to get.

Jamaica Health Minister Christopher Tufton said while his country's low vaccination rate could be explained by vaccine hesitancy and an initial lack of supply, Jamaicans now want Pfizer, 208,260 doses of which were shipped in August by the U.S. He said more than 10% of the population is fully vaccinated, while at least 20% has had at least once dose.

"The U.S. measure would certainly have an impact given our close connection with that country for business and pleasure," he said. "For some, it would be a vaccine mandate imposed externally, so it's likely to impact vaccine" acceptance.

In countries like Argentina, there has been a patchwork of vaccine options, but not all have been available simultaneously or in all areas. More than 10 million Argentinians vaccinated with Russian Sputnik V will not be able to come to the U.S. if manufacturers do not solve issues with the production plants that have halted the WHO's approval process.

Russian Health Minister Mikhail Murashko said last week that manufacturers have answered all the questions needed to get the authorization, but the WHO later said a decision on the Sputnik V vaccine was not imminent. Russian media outlet Sputnik also reported that the country's authorities intend to discuss with their U.S. counterparts a mutual recognition of vaccine certificates in an upcoming meeting in Geneva.

"In principle we have always said that those who have been vaccinated should not face any restrictions in terms of travel, including testing or even quarantine," said Markus Ruediger, a spokesman for the International Air Transport Association.

"However, we believe that options for those who cannot be vaccinated -- for medical reasons or due to lack of vaccine -- should not be excluded and that alternatives, such as testing, should be made available."