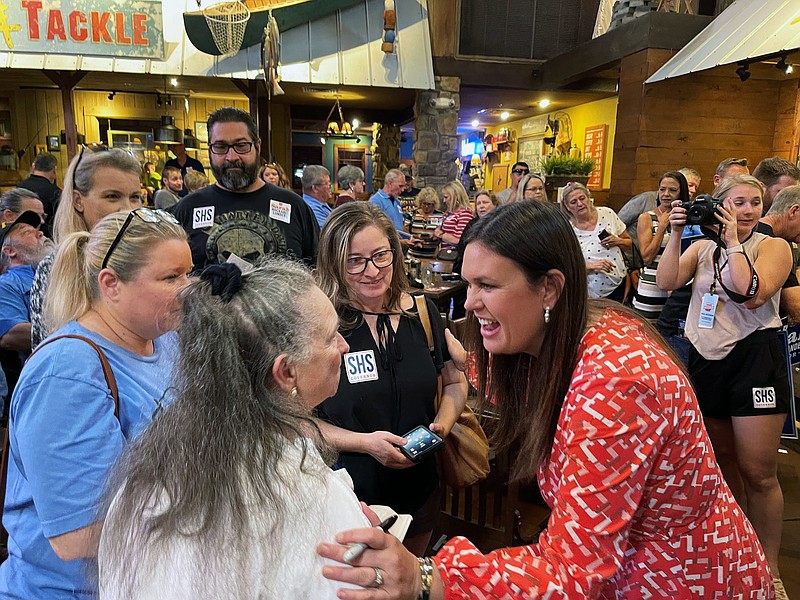 FILE - In this Sept. 10, 2021, file photo, former White House press secretary Sarah Sanders, right, greets supporters at an event for her campaign for governor at a Colton's Steak House in Cabot, Ark. Sanders has raised $2.1 million over the past three months in her bid to be Arkansas' next governor, her campaign announced Thursday, Oct. 14, 2021. (AP Photo/Andrew DeMillo)

LITTLE ROCK -- Former White House press secretary Sarah Sanders has raised $2.1 million over the past three months in her bid to be Arkansas' next governor, her campaign announced Thursday.

Sanders' campaign said the latest contributions brought her total fundraising haul since she announced she was running in January to more than $11 million, which is the most that has been raised for a governor's race in the state. Sanders has more than $7 million cash on hand, her campaign said.

Sanders, who grew up in Texarkana while her father, former Gov. Mike Huckabee, pastored Beech Street Baptist Church, is running against Attorney General Leslie Rutledge for the Republican nomination for governor.

Rutledge has not yet announced her fundraising figures for the quarter. Rutledge in July reported that her campaign had raised $1.4 million since announcing her candidacy last year.

Friday is the deadline for campaigns to file their quarterly fundraising reports with the state.

The two are running to succeed Republican Gov. Asa Hutchinson, who can't run for reelection because he's reached his term limit.

"I am grateful for the overwhelming support I have received from every county in our state and every state in our nation," Sanders said in a statement. Her campaign did not say how much she spent during the quarter.

Sanders, who last month launched her first television ad and a statewide tour, has been campaigning primarily on national issues such as border control and the country's withdrawal from Afghanistan. All but $3.7 million of the money her campaign has raised has come from out of state.

Chris Jones, who is seeking the Democratic nomination for governor, raised $384,366 during the quarter and spent $455,547, his campaign said. Jones had $468,299 cash on hand and has raised more than $1 million since announcing his candidacy in June.

"This fundraising mark is proof that Arkansas is open to choosing a path that leads away from division, and toward bringing us all back together as one Arkansas," Jones said in a statement.