Biden open to shortening length of programs in spending bill 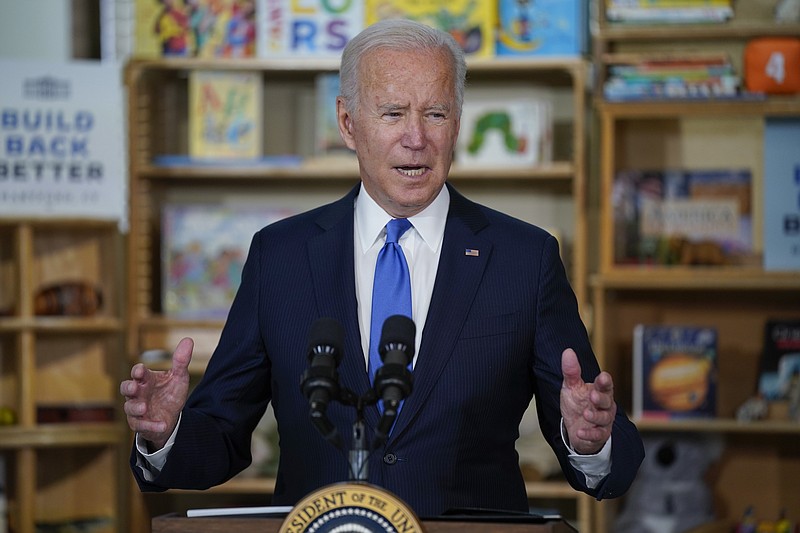 HARTFORD, Conn. -- President Joe Biden said Friday he would prefer to cut the duration of programs in his big social services and climate change package rather than eliminate some entirely, as Democrats struggle to win support from moderates by trimming what had been a $3.5 trillion proposal.

Biden's comments, reassuring progressives on what he hopes will be a landmark piece of his legacy, marked his clearest comments yet on how he hopes negotiations over the bill will play out. Appearing to side with a strategy preferred by progressive lawmakers, it marked at least a subtle break with House Speaker Nancy Pelosi, who has suggested that most Democrats prefer to focus on establishing a few enduring programs.

He also said there is no deadline for a deal.

"I'm of the view that it's important to establish the principle on a whole range of issues without guaranteeing to get the whole 10 years," Biden told reporters before boarding Air Force One to return to Washington from a trip to Connecticut. "It matters to establish it."

"So what happens is, you pass the principle and you build on it," he added. "You look back and either it works or it doesn't work."

Pelosi, however, in a Monday note to fellow Democratic lawmakers, said, "Overwhelmingly, the guidance I am receiving from members is to do fewer things well."

Biden said Friday that although he expects the package to shrink, "we're going to come back and get the rest" after it's passed.

"We're not going to get $3.5 trillion. We'll get less than that, but we're gonna get it. And we're going to come back and get the rest," Biden said during remarks at a child care center in Connecticut.

Democrats on Capitol Hill are working to reduce the sweeping package to about $2 trillion in spending, which would be paid for with higher taxes on corporations and the wealthy. The proposal includes everything from free child care and community college to dental, vision and hearing aid benefits for seniors and a number of significant provisions meant to combat climate change. They're all key items for progressives, but moderates have balked at the original $3.5 trillion price tag.

One almost certain reduction would be in the proposal for free community college.

"I doubt whether we will get the entire funding for community colleges but I'm not going to give up on community colleges as long as I'm president," Biden said. His wife, Jill, is a professor of English at Northern Virginia Community College.

With slim margins in the House and the Senate, Democrats have no votes to spare on the bill. The whittling process has sparked concern from some progressives.

The party's internal debate was apparent as Senate Budget Committee Chairman Bernie Sanders, I-Vt., wrote an opinion column for a West Virginia newspaper calling out that state's Democratic Sen. Joe Manchin by name for blocking the domestic package so far.

Sanders named Manchin as one of only two Democratic senators who "remain in opposition" to the measure, thwarting the unanimous support the party needs in the 50-50 Senate to approve the still-evolving legislation.

"This is a pivotal moment in modern American history. We now have a historic opportunity to support the working families of West Virginia, Vermont and the entire country and create policy which works for all, not just the few," Sanders wrote in a piece scheduled to appear in Sunday's Charleston Gazette-Mail.

Manchin shot back in a statement late Friday, saying: "It isn't the first time an out-of-stater has tried to tell West Virginians what is best for them."

It's highly unusual for a senator to publicly criticize a colleague of the same party, particularly by wading into the other lawmaker's state.

Manchin has proposed holding the measure's overall 10-year cost to $1.5 trillion and has said he wants to limit some health care initiatives to benefit only lower-earning people.

Sanders and Manchin stand, respectively, as among the Democrats' most progressive and conservative senators.

Biden has openly acknowledged the price tag of his package will have to come down. On Friday, he visited a child development center in Hartford to speak about a need for investments in child care and other social safety net programs, arguing they're imperative to keep America competitive in the global economy.

At the center, Biden promoted his proposal to make such care free for lower-income families, and ensure that families making up to 150% of their state's median income pay less than 7% of their salaries on child care. It's part of a massive expansion of the social safety net that Biden has championed and is aiming to pass with just Democratic votes in Congress.

Biden briefly greeted some of the children at the center's playground, at one point kneeling to give a child a hug.

The president's sales pitch comes as his Democratic allies have raised concerns that the American public does not understand the benefits of his package. There is renewed urgency among Democrats to push it through ahead of an end-of-month deadline on transportation funding, Biden's upcoming foreign trip, and a closer-than-anticipated race for Virginia's next governor.

The fate of the legislation, branded "Build Back Better" by Biden, is also holding up a more than $1 trillion bipartisan infrastructure bill that passed the Senate this summer. House progressives are balking at supporting that roads-and-bridges bill until agreement is reached on a path forward for the social safety net package.

In an interview this week with The Associated Press, Terry McAuliffe, the Democratic candidate for Virginia governor, criticized Democrats including Biden over the lack of progress.

"They all got to get their act together and vote," McAuliffe said. Asked specifically if he was calling out Biden, McAuliffe said, "I put everybody there." McAuliffe is in a tight race with Republican newcomer Glenn Youngkin in a state Biden carried by 10 points last fall.

Biden also delivered remarks later at the dedication of the Dodd Center for Human Rights at the University of Connecticut, which is being renamed to honor a longtime friend, former Connecticut Sen. Chris Dodd, and Dodd's father, also a former senator. 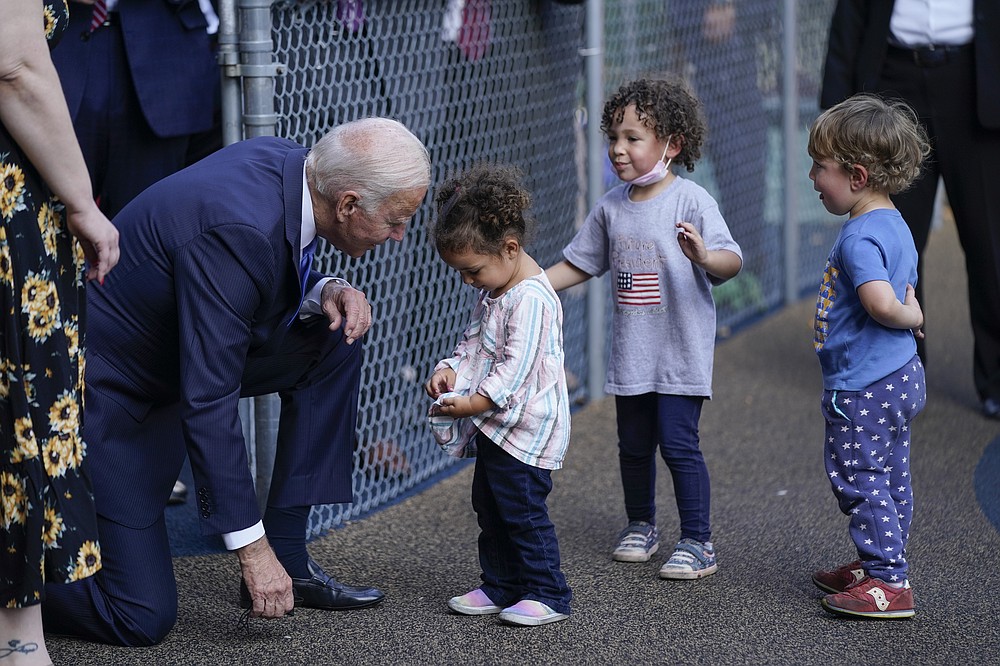 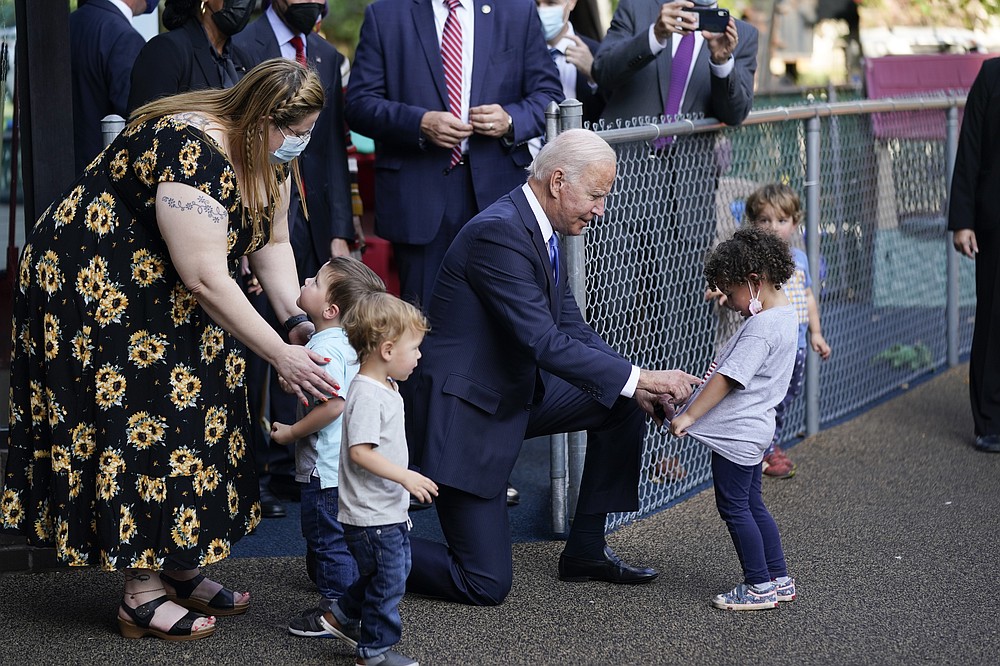 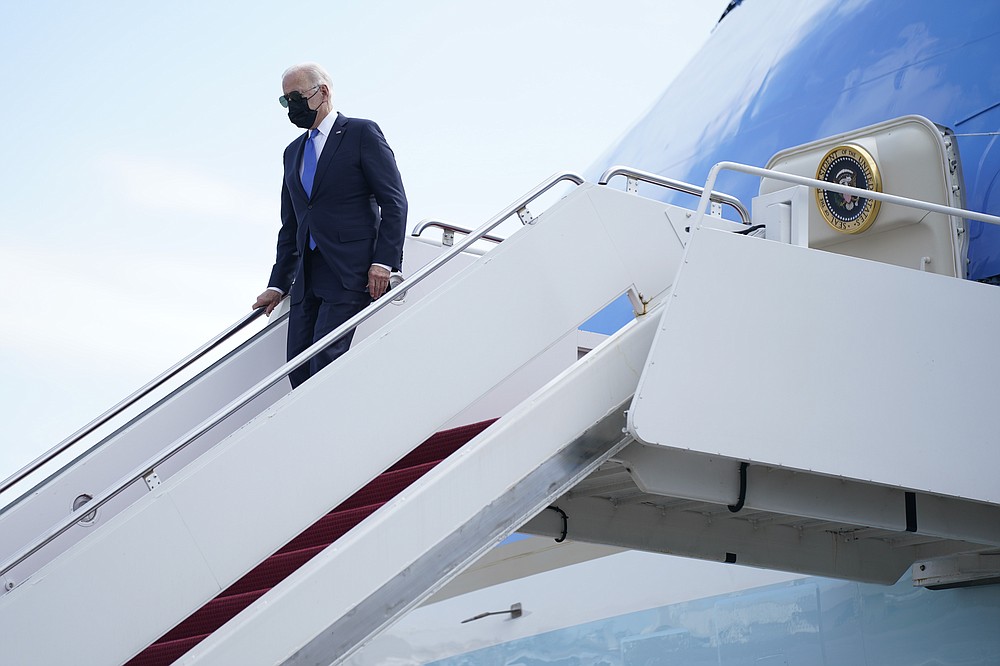 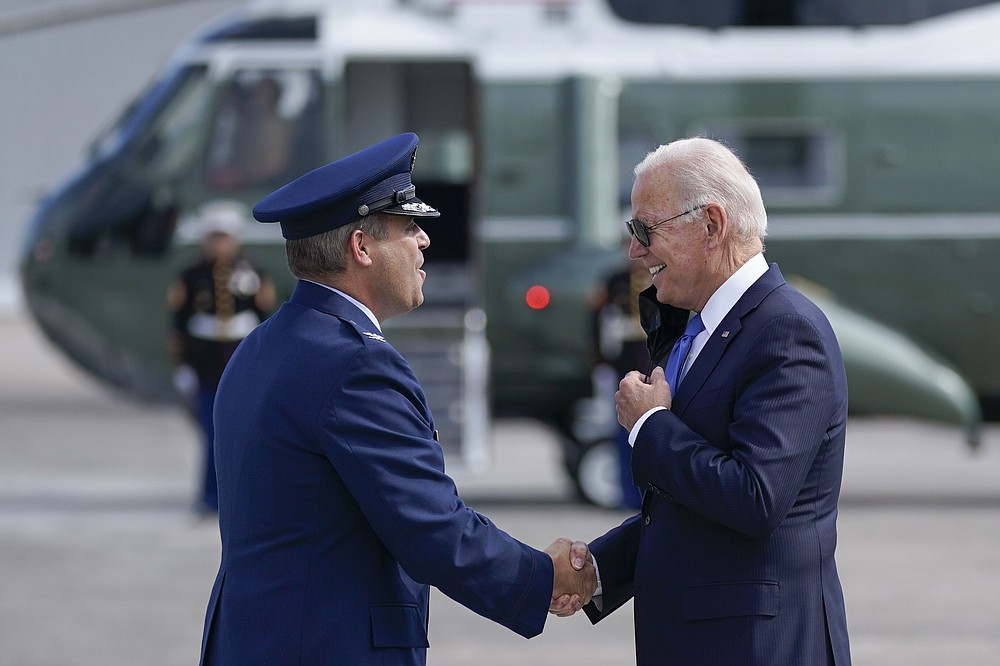 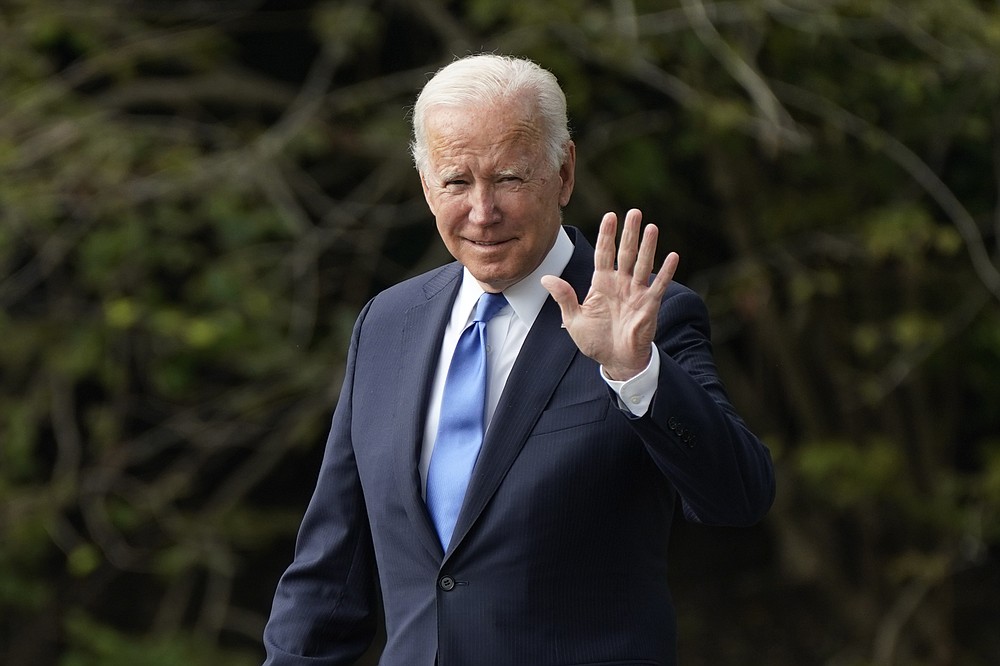 President Joe Biden walks to Marine One at the White House in Washington for a flight to Andrews Air Force Base, Md., and then onto Hartford and Storrs, Ct., Friday, Oct. 15, 2021. (AP Photo/Manuel Balce Ceneta) 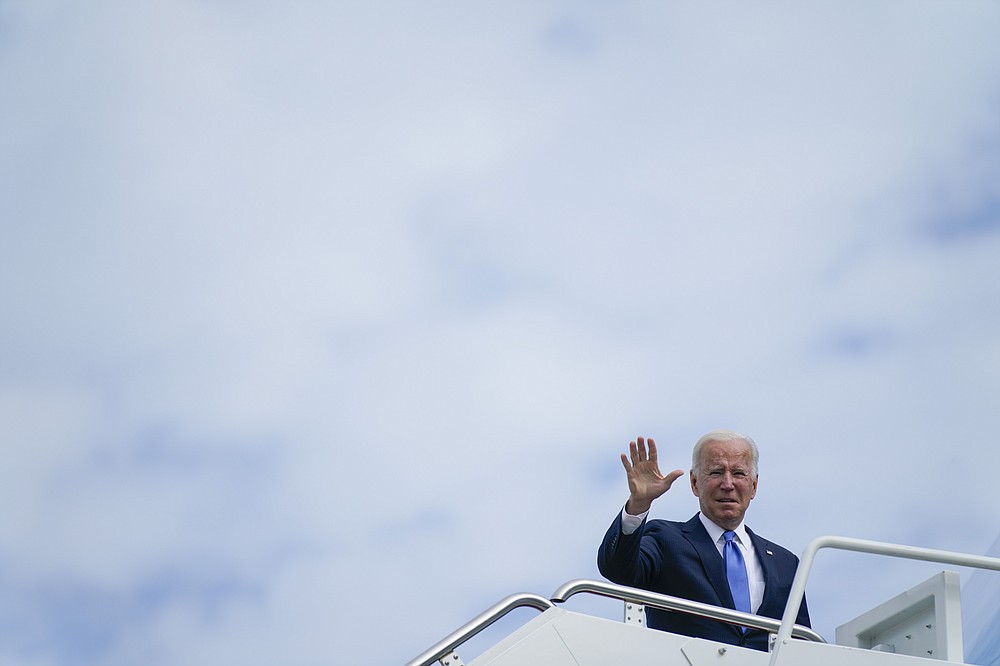 President Joe Biden waves as he boards Air Force One for a trip to Connecticut to promote his &quot;Build Back Better&quot; agenda, Friday, Oct. 15, 2021, in Andrews Air Force Base, Md. (AP Photo/Evan Vucci) 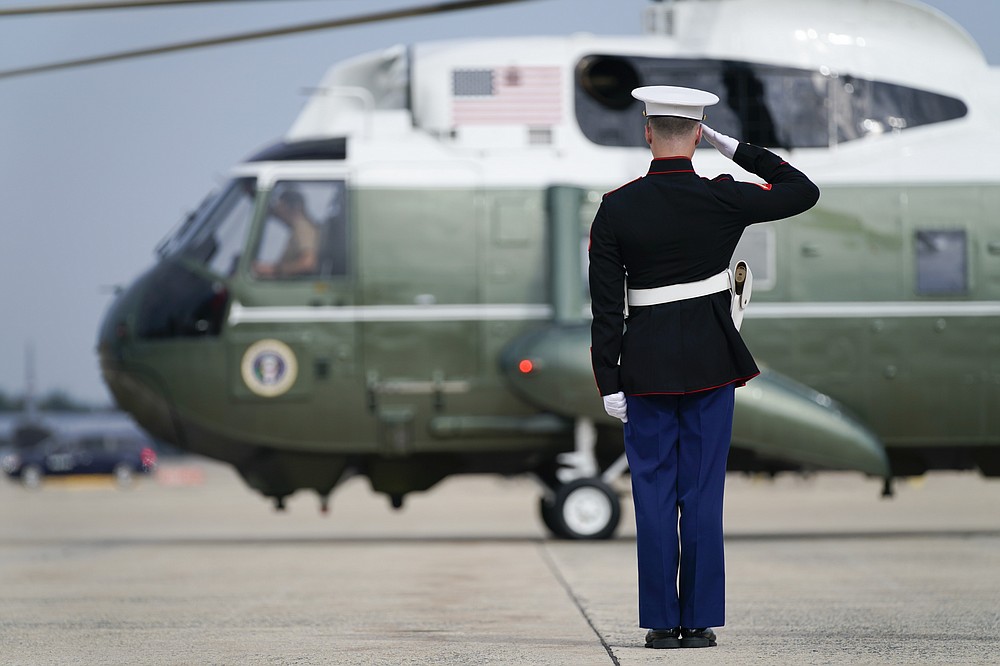 A soldier stands at attention as Marine One, with President Joe Biden aboard, lands Friday, Oct. 15, 2021, in Andrews Air Force Base, Md. (AP Photo/Evan Vucci)