Russia says it pushed U.S. destroyer from area near its waters 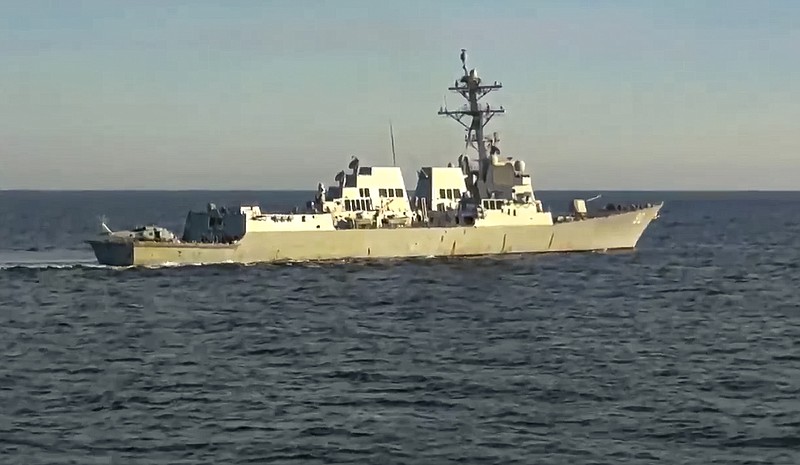 MOSCOW -- Russia's Defense Ministry said a Russian warship on Friday prevented a U.S. Navy destroyer from what it described as an attempt to intrude into Russia's territorial waters in the Sea of Japan.

The incident came as Russia and China conducted joint naval drills in the area, and follows other dangerously close encounters involving Russian and Western warships. It appears to reflect Moscow's intention to raise the stakes in deterring the U.S. and its allies from sending their ships on missions near Russian waters, as relations between Russia and the West are at a post Cold War low.

There was no immediate response from Washington.

The ministry said that the Russian navy's Admiral Tributs destroyer closely approached the U.S. destroyer USS Chafee to chase it out of the area near Russian waters that was declared off limits to shipping due to the gunnery drills there as part of the Russia-China maneuvers.

It said the Russian vessel came close to the U.S. warship after it had ignored repeated warnings to leave the area in the Peter the Great Gulf. The ministry charged that after making "an attempt to cross the Russian sea border," the U.S. warship changed course when the two ships were just 60 meters (66 yards) away from each other and sped away.

It denounced the U.S. destroyer's maneuvers as a "crude violation" of the international rules on averting ships' collision and a 1972 agreement between Moscow and Washington on preventing air and naval incidents and summoned the U.S. military attache to protest what it described as its crew's "unprofessional action."

Russia, the U.S. and its NATO allies have frequently accused each other of dangerous and provocative maneuvers at sea and in the air as Russia-West ties have been hit by Moscow's annexation of Crimea, accusations of Russian interference with elections, hacking attacks and other tensions.

In June, Russia said one of its warships fired warning shots and a warplane dropped bombs in the path of British destroyer Defender to drive it away from Black Sea waters near the Crimean city of Sevastopol. Britain denied that account, insisted its ship wasn't fired upon and said it was sailing in Ukrainian waters.

Like most of the world, Britain recognizes Crimea as part of Ukraine despite the peninsula's 2014 annexation by Russia.

In the aftermath of the incident Moscow warned that it is prepared to target intruding warships if they fail to heed warnings. In a statement intended to signal Russian resolve, Russian President Vladimir Putin charged that the incident couldn't have triggered a global conflict even if Russia had sunk the warship because the West knows it can't win such a war.

In other recent naval incidents, the Russian military said the British destroyer HMS Dragon intruded into Russian waters near Crimea in October 2020, and the U.S. destroyer USS John S. McCain allegedly violated the Russian border in the Peter the Great Gulf in the Sea of Japan in November.

In the aftermath of those incidents, Russia rejected the U.S. and British arguments that their warships were exercising the right of so-called "innocent passage" under international maritime law.

Retired Adm. Viktor Kravchenko, the former Russian navy chief of staff, said Friday's incident could have had grave consequences. "The Americans apparently wanted to test our strength," he said, according to the Interfax news agency.

The Russian warship's maneuver during Friday's incident appeared to indicate Moscow's readiness to raise the stakes to prevent similar intrusions in the future.

The encounter revived memories of a Cold War incident when a Soviet frigate bumped the U.S. cruiser USS Yorktown in the Black Sea as it was making an "innocent passage" in Russian waters in 1988, damaging the U.S. warship. 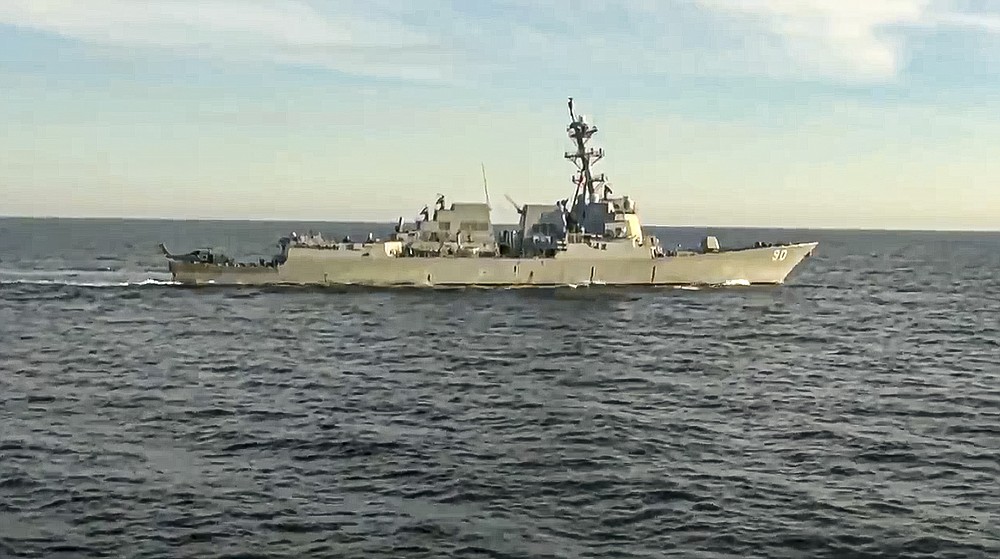 Print Headline: Russia says it pushed U.S. destroyer from area near its waters