Reports: Health problems tied to global warming on the rise 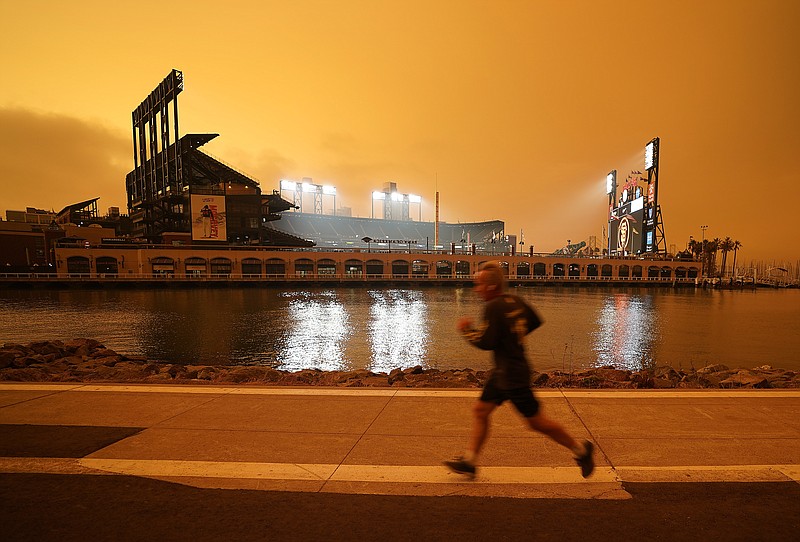 FILE - In this Wednesday, Sept. 9, 2020 file photo, a jogger runs along McCovey Cove outside Oracle Park in San Francisco, under darkened skies from wildfire smoke.Health problems tied to climate change are all getting worse, according to two reports published in the medical journal Lancet on Wednesday, Oct. 20, 2021. An unprecedented Pacific Northwest and Canadian heat wave hit this summer, which a previous study showed couldn't have happened without human-caused climate change. (AP Photo/Tony Avelar)

Health problems tied to climate change are all getting worse, according to two reports published Wednesday.

The annual reports commissioned by the medical journal Lancet tracked 44 global health indicators connected to climate change, including heat deaths, infectious diseases and hunger. All of them are getting grimmer, said Lancet Countdown project research director Marina Romanello, a biochemist.

This year's reports -- one global, one just aimed at the United State s -- called "code red for a healthy future," highlight dangerous trends:

-- Vulnerable populations -- older people and very young -- were subject to more time with dangerous heat last year. For people over 65, the researchers calculated there were 3 billion more "person-day" exposures to extreme heat than the average from 1986 to 2005.

-- More people were in places where climate-sensitive diseases can flourish. Coastline areas warm enough for the nasty Vibrio bacteria increased in the Baltics, the U.S. Northeast and the Pacific Northwest in the past decade. In some poorer nations, the season for malaria-spreading mosquitoes has expanded since the 1950s.

"Code Red is not even a hot enough color for this report, " said Stanford University tropical medicine professor Dr. Michele Barry, who wasn't part of the study team. Compared to the last Lancet report, "this one is the sobering realization that we're going completely in the wrong direction."

In the U.S., heat, fire and drought caused the biggest problems. An unprecedented Pacific Northwest and Canadian heat wave hit this summer, which a previous study showed couldn't have happened without human-caused climate change.

Study co-author Dr. Jeremy Hess, a professor of environmental health and emergency medicine at the University of Washington, said he witnessed the impacts of climate change while working at Seattle emergency rooms during the heat.

"I saw paramedics who had burns on their knees from kneeling down to care for patients with heat stroke," he said. ""And I saw far too many patients die" from the heat.

Another ER doctor in Boston said science is now showing what she has seen for years, citing asthma from worsening allergies as one example.

"Climate change is first and foremost a health crisis unfolding across the U.S.," said Dr. Renee Salas, also a co-author of the report.

George Washington University School of Public Health Dean Dr. Lynn Goldman, who was not part of the project, said health problems from climate change "are continuing to worsen far more rapidly than would have been projected only a few years ago."

The report said 65 of the 84 countries included subsidize the burning of fossil fuels, which cause climate change. Doing that "feels like caring for the desperately ill patient while somebody is handing them lit cigarettes and junk food," said Dr. Richard Jackson, a UCLA public health professor who wasn't part of the study.

Read more stories on climate issues by The Associated Press at https://www.apnews.com/Climate

The Associated Press Health and Science Department receives support from the Howard Hughes Medical Institute's Department of Science Education. The AP is solely responsible for all content.