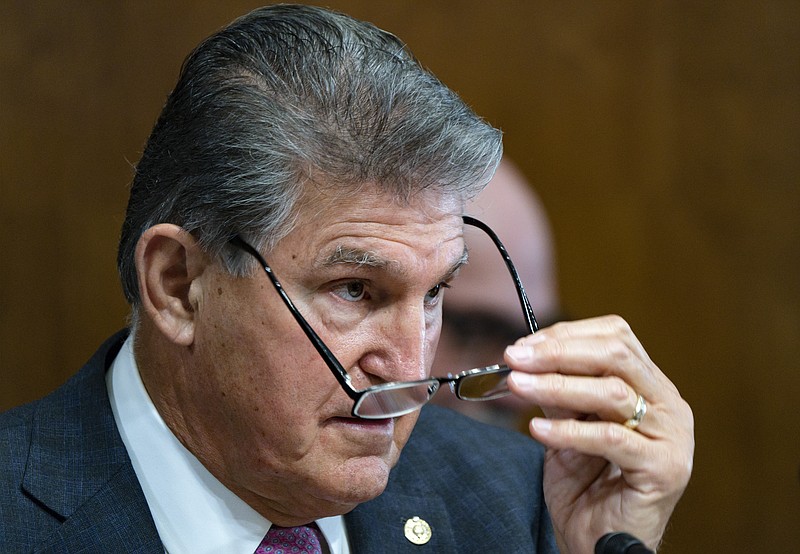 WASHINGTON -- Deadline driven, President Joe Biden brought two pivotal senators to his Delaware home Sunday for talks aimed at resolving the disputes that have stymied the Democrats' wide-ranging social safety net and environmental measure at the core of his domestic agenda.

Beyond the domestic timetable, Biden is pressing for progress so he can spotlight his administration's achievements to world leaders at overseas summits that get underway this week.

House Speaker Nancy Pelosi, D-Calif., said she expected an agreement on a framework by week's end, paving the way for a House vote on a separate $1 trillion bipartisan infrastructure bill before next Sunday, when a series of transportation programs will lapse.

The White House said Senate Majority Leader Chuck Schumer, D-N.Y., and Sen. Joe Manchin, D-W.Va., came to Biden's home in Wilmington, where he was spending the weekend, for the session but did not immediately provide a statement detailing what was discussed.

Manchin and Sen. Kyrsten Sinema, D-Ariz., two of their party's most moderate members, have insisted on reducing the size of the enormous package and have pressed for other changes.

Pelosi said she was waiting for the Senate to wrap up talks and was expecting a plan to be introduced as early as Monday. Top Democrats are scrambling to have a framework so they can move to pass the infrastructure bill, which progressives in the House have held up as leverage to force agreement on the bigger package of health care, education and environment initiatives.

"I think we're pretty much there," said Pelosi, stressing that a few "last decisions" need to be made. "It is less than what was projected to begin with, but it's still bigger than anything we have ever done in terms of addressing the needs of America's working families."

Democrats initially planned that the measure would contain $3.5 trillion worth of spending and tax initiatives over 10 years. But demands by moderates led by Manchin and Sinema to contain costs mean its final price tag could well be less than $2 trillion.

Disputes remain over whether some priorities must be cut or excluded. These include plans to expand Medicare coverage, child care assistance and helping lower-income college students. Manchin, whose state has a major coal industry, has opposed proposals to penalize utilities that do not switch quickly to clean energy.

Pelosi said Democrats were still working to keep in provisions for four weeks of paid family leave but acknowledged that other proposals such as expanding Medicare to include dental coverage could prove harder to save because of cost. "Dental will take a little longer to implement," she said.

Also expected to be trimmed is a clean energy proposal that was the centerpiece of Biden's strategy for fighting climate change. Biden has set a goal of reducing U.S. greenhouse gas emissions by at least 50% by 2030. But Manchin has made clear he opposes the initial clean energy proposal, which was to have the government impose penalties on electric utilities that fail to meet clean energy benchmarks and provide financial rewards to those that do.

Democrats were hoping Biden could cite major accomplishments when he attends a global conference in Scotland on climate change in early November after attending summit of world leaders in Rome.

Sen. Angus King, a Maine independent who caucuses with Democrats, said the expected cuts to the clean energy provisions in the spending bill were especially disappointing because "it weakens Joe Biden's hands in Glasgow."

"If we're going to get the rest of the world to take serious steps to remedy this problem, we've got to do it ourselves," he said.

Pelosi insisted that Democrats had pieced together other policies in the spending bill that could reduce emissions. "We will have something that will meet the president's goals," she said.

The White House and congressional leaders have tried to push monthslong negotiations toward a conclusion by the end of October. Democrats' aim is to produce an outline by then that would spell out the overall size of the measure and describe policy goals that leaders as well as progressives and moderates would endorse.

The wide-ranging measure carries many of Biden's top domestic priorities. Party leaders want to end internal battles, avert the risk that the effort could fail and focus voters' attention on the plan's popular programs for helping families with child care, health costs and other issues.

The hope is that an agreement between the party's two factions would create enough trust to let Democrats finally push through the House the separate $1 trillion package of highway and broadband projects.

That bipartisan measure was approved over the summer by the Senate. But it stalled after House progressives pulled their support due to disagreements on the bigger spending bill, causing Congress to miss an initial deadline in late September and to rush to approve stopgap money for lapsing transportation programs. Pelosi later set an Oct. 31 target for passage of the infrastructure bill, though lawmakers already have slipped past last Friday's goal set by Democratic leaders to reach agreement on the spending package.

With Republicans fully opposed to Biden's spending plans, the president needs all Democrats in the 50-50 split Senate for passage and can only spare a few votes in the House.

Rep. Ro Khanna, a member of the Congressional Progressive Caucus, maintained that his caucus will not budge on supporting the infrastructure bill before Oct. 31 if there is no agreement on the broader package, which would be passed under so-called budget reconciliation rules.

"The president needs the reconciliation agreement to go to Glasgow," said Khanna, D-Calif. "That's what is going to deal with climate change, that's what's going to hit his goals of 50% reduction by 2030. I'm confident we will have an agreement."

Pelosi spoke on CNN's "State of the Union," King appeared on NBC's "Meet the Press" and Khanna on "Fox News Sunday." 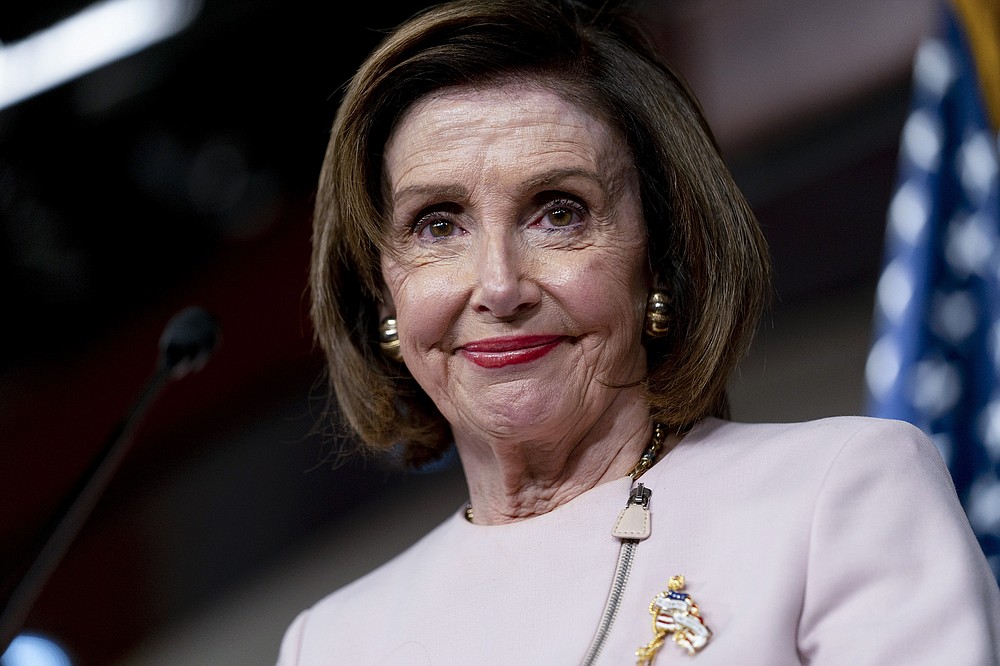 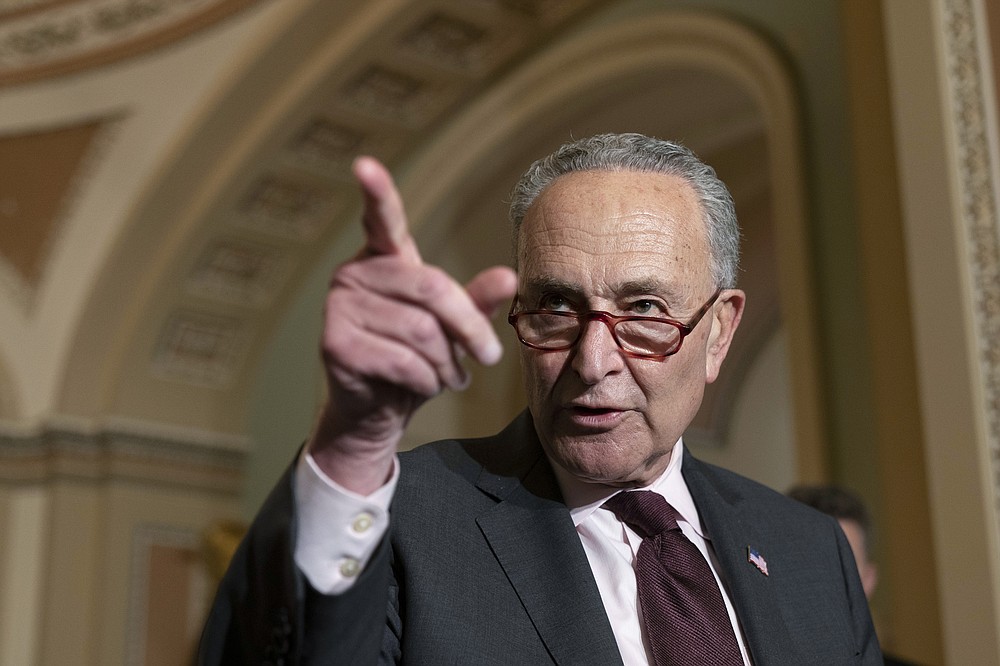 Senate Majority Leader Chuck Schumer of N.Y., calls on a reporter as he speaks after a Democratic policy luncheon, Tuesday, Oct. 19, 2021, on Capitol Hill in Washington. (AP Photo/Jacquelyn Martin) 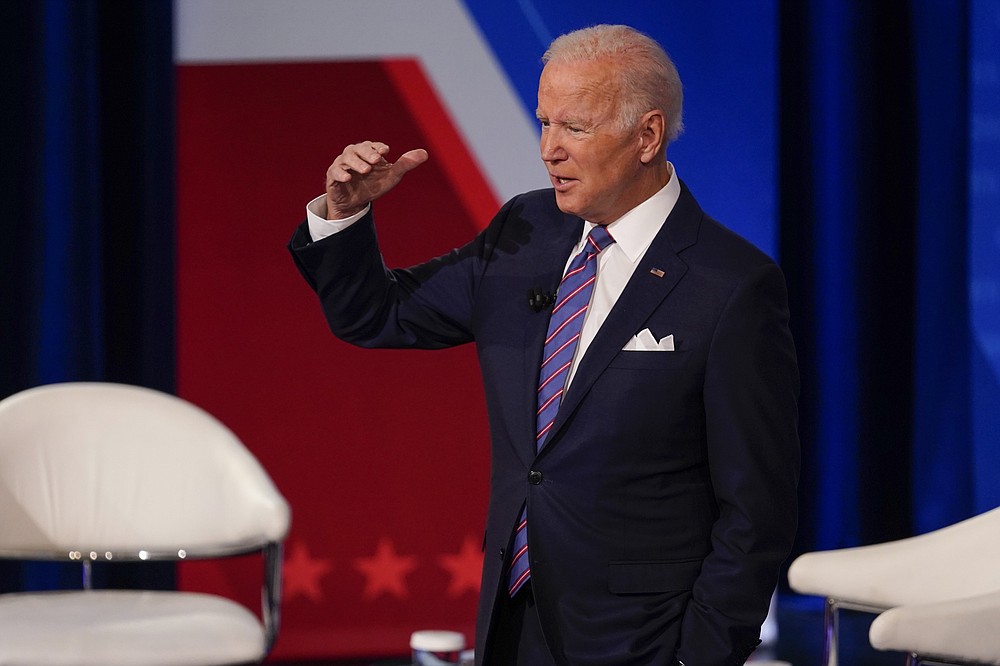