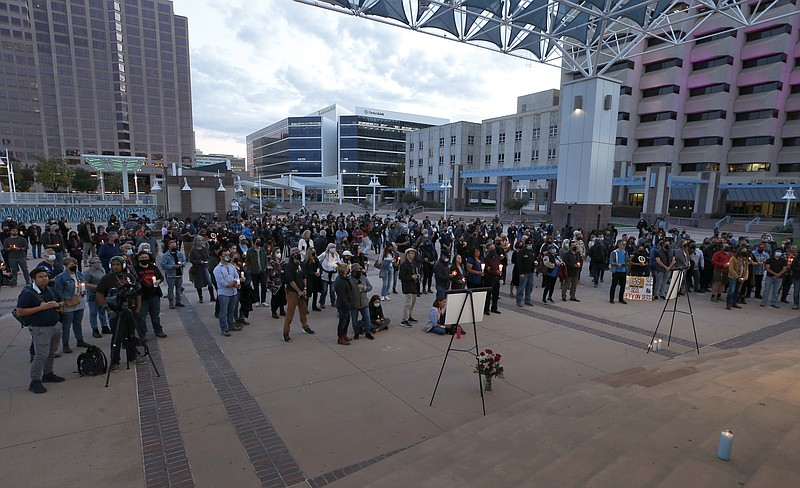 FILE - A large crowd of movie industry workers and New Mexico residents attend a candlelight vigil to honor cinematographer Halyna Hutchins in downtown Albuquerque, N.M. Saturday, Oct. 23, 2021. Hutchins was killed when Alec Baldwin fired a weapon on a film set that a crew member told him was safe. The tragedy has led to calls for fundamental change in Hollywood: the banning of real guns on sets. (AP Photo/Andres Leighton, file)

NEW YORK -- With computer-generated imagery, it seems the sky's the limit in the magic Hollywood can produce: elaborate dystopian universes. Trips to outer space, for those neither astronauts nor billionaires. Immersive journeys to the future, or back to bygone eras.

But as a shocked and saddened industry was reminded this week, many productions still use guns -- real guns -- when filming. And despite rules and regulations, people can get killed, as happened last week when Alec Baldwin fatally shot cinematographer Halyna Hutchins after he was handed a weapon and told it was safe.

The tragedy has led some in Hollywood, along with incredulous observers, to ask: Why are real guns ever used on set, when computers can create gunshots in post-production? Isn't even the smallest risk unacceptable?

For Alexi Hawley, it is. "Any risk is too much risk," the executive producer of ABC's police drama "The Rookie" announced in a staff memo Friday, saying the events in New Mexico had "shaken us all."

There "will be no more 'live' weapons on the show," he wrote in a note, first reported by The Hollywood Reporter and confirmed by The Associated Press.

Instead, he said, the policy would be to use replica guns, which use pellets and not bullets, with muzzle flashes added in post-production.

The director of the popular Kate Winslet drama "Mare of Easttown," Craig Zobel, called for the entire industry to follow suit and said gunshots on that show were added after filming, even though on previous productions he has used live rounds.

"There's no reason to have guns loaded with blanks or anything on set anymore," Zobel wrote on Twitter. "Should just be fully outlawed. There's computers now. The gunshots on 'Mare of Easttown' are all digital. You can probably tell, but who cares? It's an unnecessary risk."

Bill Dill -- a cinematographer who taught Hutchins, a rising star in her field, at the American Film Institute -- expressed disgust in an interview over the "archaic practice of using real guns with blanks in them, when we have readily available and inexpensive computer graphics."

Dill, whose credits include "The Five Heartbeats" and "Dancing in September," said there was added danger from real guns because "people are working long hours" on films and "are exhausted."

"There's no excuse for using live weapons," he said.

A petition was launched over the weekend on change.org for real guns to be banned from production sets.

"There is no excuse for something like this to happen in the 21st century," it said of the tragedy. "This isn't the early 90′s, when Brandon Lee was killed in the same manner. Change needs to happen before additional talented lives are lost." Lee, the actor son of martial arts legend Bruce Lee, was killed in 1993 by a makeshift bullet left in a prop gun after a previous scene.

The petition appealed to Baldwin directly "to use his power and influence" in the industry and promote "Halyna's Law," which would ban the use of real firearms on set. As it stands, the U.S. federal workplace safety agency is silent on the issue and most of the preferred states for productions take a largely hands-off approach.

Hutchins, 42, died and director Joel Souza was wounded Thursday on the set of the Western "Rust" when Baldwin fired a prop gun that a crew member unwittingly told him was "cold" or not loaded with live rounds, according to court documents made public Friday.

Souza was later released from the hospital.

The tragedy came after some workers had walked off the job to protest safety conditions and other production issues on the film, of which Baldwin is the star and a producer.

In an interview, British cinematographer Steven Hall noted that he worked on a production this year in Madrid that involved "lots of firearms."

"We were encouraged not to use blanks, but to rely on visual effects in post (production) to create whatever effect we wanted from a particular firearm, with the actor miming the recoil from the gun, and it works very well," he said.

He noted, though, that special effects add costs to a production's budget. "So it's easier and perhaps more economic to actually discharge your weapon on set using a blank," said Hall, a veteran cinematographer who has worked on films like "Fury" and "Thor: The Dark World." But, he said, "the problem with blanks is, of course ... something is emitted from the gun."

Besides financial concerns, why else would real guns be seen as preferable? "There are advantages to using blanks on set that some people want to get," said Sam Dormer, a British "armorer," or firearms specialist. "For instance, you get a (better) reaction from the actor."

Still, Dormer said, the movie industry is likely moving away from real guns, albeit slowly.

The term "prop gun" can apply to anything from a rubber toy to a real firearm that can fire a projectile. If it's used for firing, even blanks, it's considered a real gun. A blank is a cartridge that contains gunpowder but no bullet. Still, it can hurt or even kill someone who is close by, according to the Actors' Equity Association.

That's why many are calling to ban blanks as well, and use disabled or replica guns.

"Really there is no good reason in this day to have blanks on set," director Liz Garbus wrote on Twitter. "CGI can make the gun seem 'real,' and if you don't have the budget for the CGI, then don't shoot the scene."

Broadway actor and playwright Harvey Fierstein wrote that the tragedy certainly made him wonder why Hollywood wasn't leaning more on special effects.

"Why, with all of the Hollywood magic available, are they still firing off gun powder? They know that they are going to goose-up the gunshots in post production," he wrote on Facebook. "Why chance an accident in the first place?"

But he also said the death raised even broader questions.

"With all of that Hollywood talent and imagination are we still writing stories about shooting one another?" he asked. "Do we really have nothing better to spend millions of dollars on than the glamorization of gun battles?" 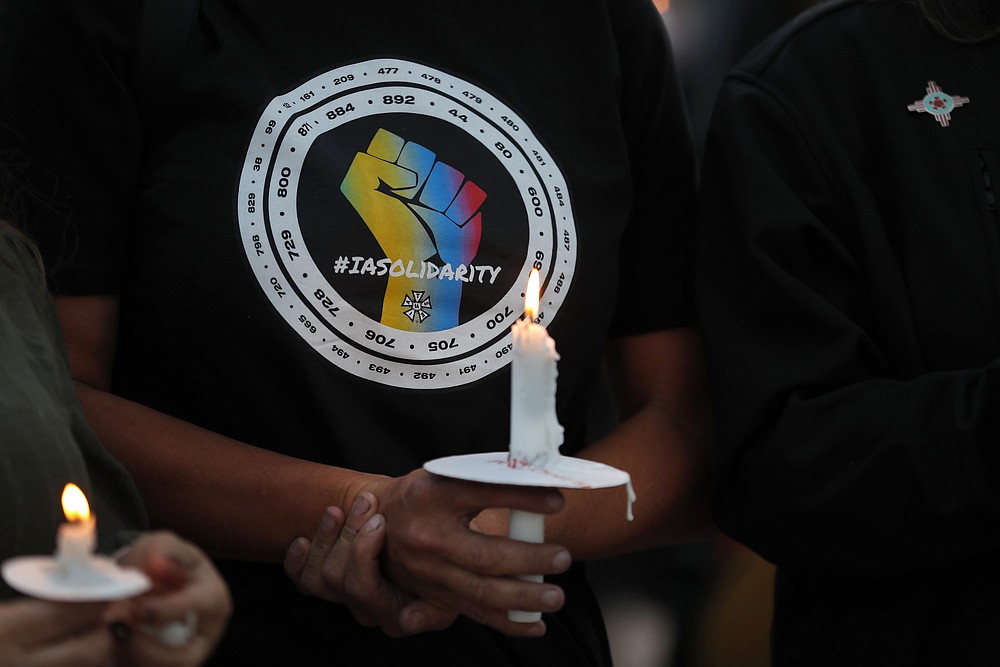 Movie industry worker Hailey Josselyn, wearing a t-shirt of the International Alliance of Theatrical Stage Employees (IATSA), holds a candle during a vigil to honor cinematographer Halyna Hutchins in Albuquerque, N.M., Saturday, Oct. 23, 2021. Hutchins was killed when actor Alec Baldwin fired a weapon on a film set that a crew member told him was safe. The tragedy has led to calls for fundamental change in Hollywood: the banning of real guns on sets. (AP Photo/Andres Leighton, file)