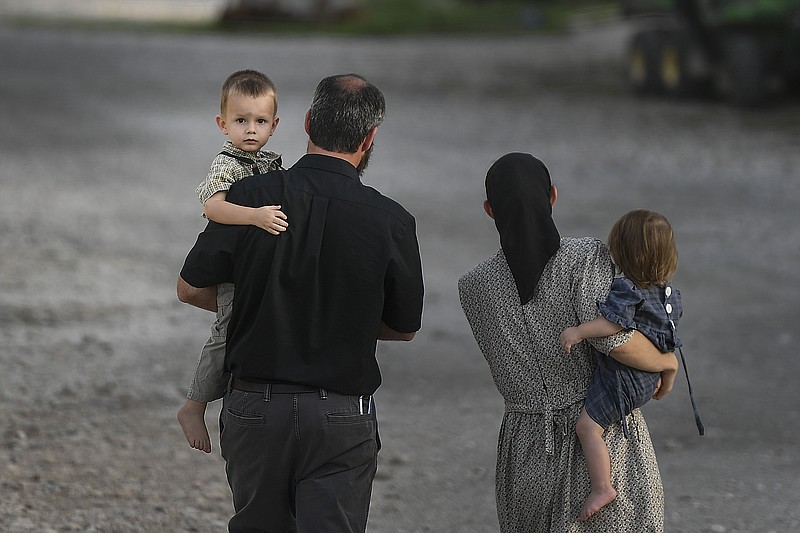 FILE- In this Thursday, Oct. 21, 2021, a man and woman hold children as they walk on the grounds of the Christian Aid Ministries headquarters in Titanyen, Haiti. Seventeen members of the CAM have been kidnapped. A joint statement by the hostages&#x2019; families said &#x201c;God has given our loved ones the unique opportunity to live out our Lord&#x2019;s command to, 'love your enemies, bless them that curse you, do good to them that hate you.'&#x201d; (AP Photo/Matias Delacroix)

When Amish gather for worship each week, they regularly sing the solemn, German-dialect hymns that their spiritual forebears composed nearly five centuries ago in a condition akin to that of 17 missionaries recently kidnapped in Haiti -- captivity.

Those hymns emerged from miserable prison conditions experienced by early Anabaptists -- founders of the movement carried on today by Amish, Mennonites, Brethren and others -- and their words extolled the virtues of loving one's tormentors and persevering at risk of persecution, even martyrdom.

So when kidnappers in Haiti abducted 12 adult missionaries and five of their children, including an infant, it wasn't surprising that those sharing that Christian tradition would draw on these values as they joined around-the-clock prayer vigils.

The words of the captors' families and supporters, while holding out hope for the safety of the hostages, put a heavy emphasis on different themes: "Love your enemies." "Forgive them." "Pray for the kidnappers."

One joint statement by the hostages' families even spoke of the situation in welcoming terms. "God has given our loved ones the unique opportunity to live out our Lord's command to, 'love your enemies, bless them that curse you, do good to them that hate you,'" said the statement, issued by Christian Aid Ministries. It is based in Ohio's Amish heartland of Holmes County, and has operated in Haiti and other lands for nearly four decades.

Such statements may seem surprising, even callous, to those who might expect the prayers to focus on the well-being of loved ones.

But these statements are deeply rooted in the unique religious tradition of conservative Anabaptists -- a group that shares some beliefs with mainstream evangelical Christians, such as salvation through Jesus, but also has stark differences.

Conservative Anabaptists largely seek to live separate from mainstream society and are distinctive for their plain dress, with women wearing head coverings. They emphasize a "non-resistance" to evil and violence, a stance that goes far beyond their refusal to serve in the military. They also have a deep tradition of martyrdom -- well-earned, since their forebears suffered fierce persecutions from their 16th century Reformation origins, when they were deemed too radical to Catholics and fellow Protestants alike.

Anabaptists in particular draw on the biblical Sermon on the Mount, which contains some of Jesus' most radical and counter-cultural sayings -- to love enemies, live simply, bless persecutors, turn the other cheek, endure sufferings joyfully.

"Living out the Sermon on the Mount principles is one of the key tenets of our faith," said Wayne Wengerd, a member of a steering committee that represents the Amish in church-state relations. "That is something that we take literally."

Those principles mandate "we do good to those who hurt or persecute us, and we pray for not only those that are likeminded but those that are not yet within the faith," he said.

Wengerd, who lives in Wayne County, adjacent to Holmes, said it would be a misunderstanding to view such a mindset as callous to the real suffering involved with the kidnappings.

"People are still concerned, they are aware, they talk about it, they pray and of course hope for a good outcome," he said. At the same time, "We realize as Christians, as followers of Christ, there will be persecution."

The missionary group was kidnapped Oct. 16 while returning from a visit to an orphanage supported by CAM. The 400 Mawozo gang has threatened to kill the 16 Americans and one Canadian if ransom demands aren't met.

Wengerd said Anabaptists draw on resources such as the "Ausbund," a hymnal that includes the 16th century prison hymns, and the book, "Martyrs Mirror," for "reminding us of the cost of discipleship in Christ's kingdom."

"Martyrs Mirror" tells of hundreds of Anabaptists and other Christians who died for their faith. One entry tells of Dirk Willems, a 16th century Dutch Anabaptist who was fleeing authorities in winter -- but turned around to saved the life of a pursuer who had fallen through the ice. Willems was arrested and executed anyway. His example of sacrificial love for an enemy is still widely taught.

An often-cited modern example of Anabaptist values is the response of the Amish community around Nickel Mines, Pennsylvania, after a gunman killed five Amish schoolgirls and wounded five more in 2006 before taking his own life. Local Amish immediately expressed forgiveness for the killer and supported his widow. "If we do not forgive, how can we expect to be forgiven?" the Amish leaders said in a statement.

Marcus Yoder, executive director of the Amish & Mennonite Heritage Center in Holmes County, said he often tells the story of Dirk Willems to groups touring the museum. One tour included a survivor of the Nickel Mines shooting.

"She cried and cried and cried," Yoder recalled. "Her father had used the story to talk to his own family about forgiveness. These pieces of our history really do reside a long time in our worldview and theology."

Yoder, a Mennonite minister, said these examples shouldn't obscure the ordeal of those whose loved ones were kidnapped. "I cannot imagine the anguish that the families are going through," he said.

Steven Nolt, professor of History and Anabaptist Studies at Elizabethtown College in Pennsylvania, recalled attending one of the Nickel Mines funerals in which the preacher said within a span of a few minutes, "We don't understand but we just accept what happened as God's will" and "It's not God's will that people shoot other people."

That seems contradictory, said Nolt. But it reflects a profound belief in "divine providence" -- that believers can't always understand why things happen, but they "can know what God wants and how humans are to live."

Ron Marks, pastor of Hart Dunkard Brethren Church in Hart, Michigan, whose members include a parent with children who are among the hostages, said it is "our Lord's command" to pray for one's persecutors and seek their conversion. "That would be the ultimate positive outcome of this ordeal," he said.

Many in the outside world have valorized Anabaptists' beliefs in forgiveness.

But it has a dark side, say advocates for victims of sexual abuse in Anabaptist communities. They say victims and their families are often forced to reconcile with abusers after the latter make a confession and undergo a brief period of discipline.

Hope Anne Dueck, co-founder of A Better Way -- an Ohio-based group that provides education on sexual abuse and advocates for victims in Anabaptist and other church settings -- said the current focus needs to be on the safety of the hostages.

But the kidnappings follow by two years the eruption of a sexual-abuse scandal involving one of CAM's former longtime missionaries to Haiti, Jeriah Mast. He was sentenced in Holmes County in 2019 to nine years in prison for having earlier abused two boys in Ohio, and his judge said at his sentencing that Mast had also confessed to molesting at least 30 boys in Haiti.

The current hostage crisis "has caused a lot of pain in the survivor and advocacy community for those who have experienced sexual abuse or grieved what has happened to Jeriah's victims," Dueck said.

She strongly endorsed the current prayer chain on behalf of the hostages but lamented: "As far as I know, there were no 24/7, around-the-clock prayer chains for Jeriah's victims."

Associated Press religion coverage receives support from the Lilly Endowment through The Conversation U.S. The AP is solely responsible for this content. 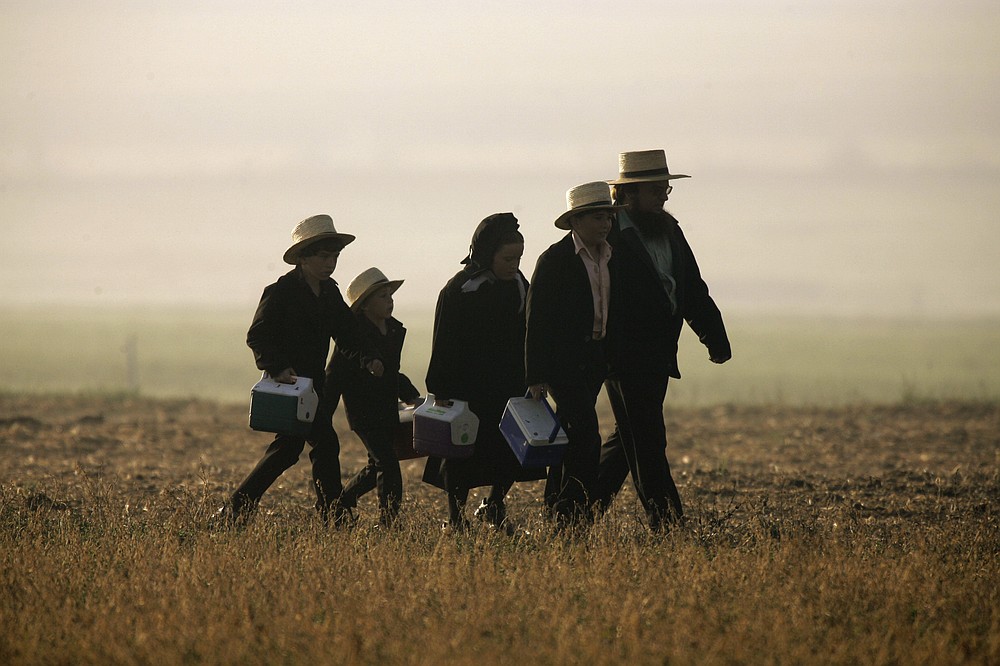 FILE - In this Monday, April 2, 2007, schoolchildren are accompanied by an adult on their way through a fog-shrouded field to the newly-reopened schoolhouse in Nickel Mines, Pa., which was built to replace the razed West Nickel Mines Amish School where a gunman killed five students and himself in October 2006. Conservative Anabaptists largely seek to live separate from mainstream society, emphasize a &#x201c;non-resistance&#x201d; to evil and violence, a stance that goes far beyond their refusal to serve in the military, and also have a deep tradition of martyrdom &#x2013; well-earned, since their forebears suffered fierce persecutions from their 16th century Reformation origins, when they were deemed too radical to Catholics and fellow Protestants alike. (AP Photo/Matt Rourke) 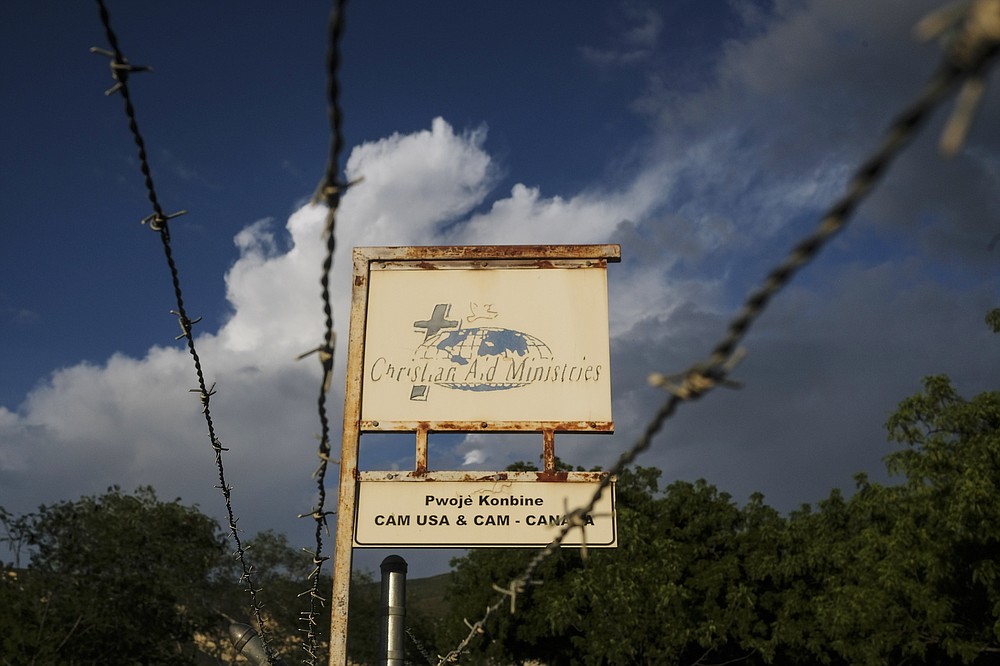 FILE - This Thursday, Oct. 21, 2021 photo shows a sign outside Christian Aid Ministries in Titanyen, Haiti, which had 17 of their members kidnapped. A joint statement by the hostages&#x2019; families said &#x201c;God has given our loved ones the unique opportunity to live out our Lord&#x2019;s command to, 'love your enemies, bless them that curse you, do good to them that hate you.'&#x201d; (AP Photo/Matias Delacroix) 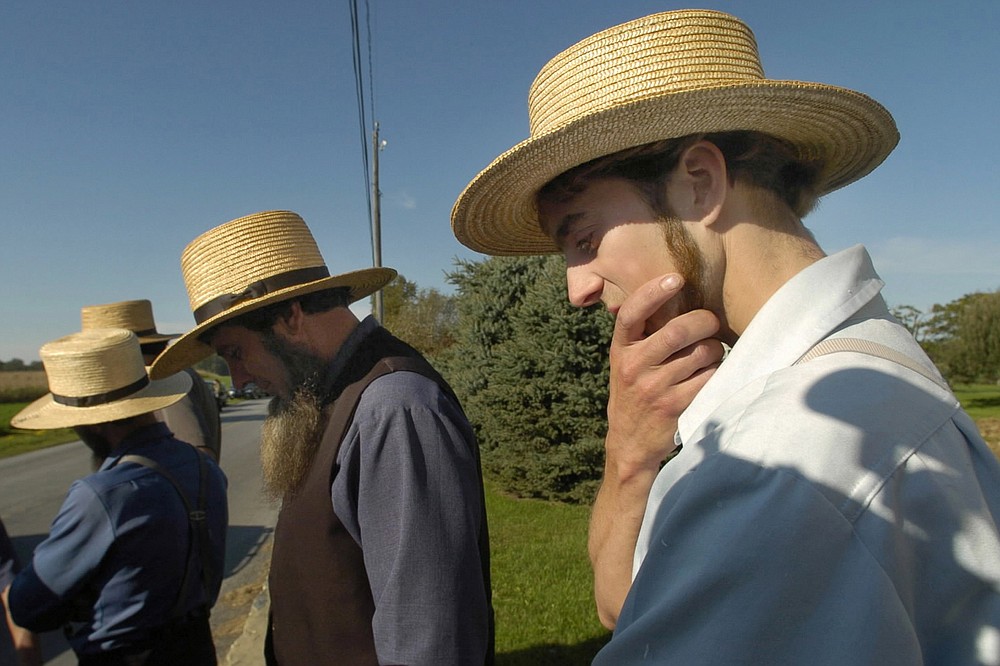 FILE - In this Monday, Oct. 2, 2006, Amish men gather across the street from the one-room schoolhouse in Nickel Mines, Pa., after a fatal shooting at the school. An example of Anabaptist values is the response of the Amish community around Nickel Mines, after a gunman killed five Amish schoolgirls and wounded five more in 2006 before taking his own life. Local Amish immediately expressed forgiveness for the killer and supported his widow. &#x201c;If we do not forgive, how can we expect to be forgiven?&#x201d; the Amish leaders said in a statement. (John Makely/The Baltimore Sun via AP)