BILL OWNEY: In style and comfort, this Ford has the Edge 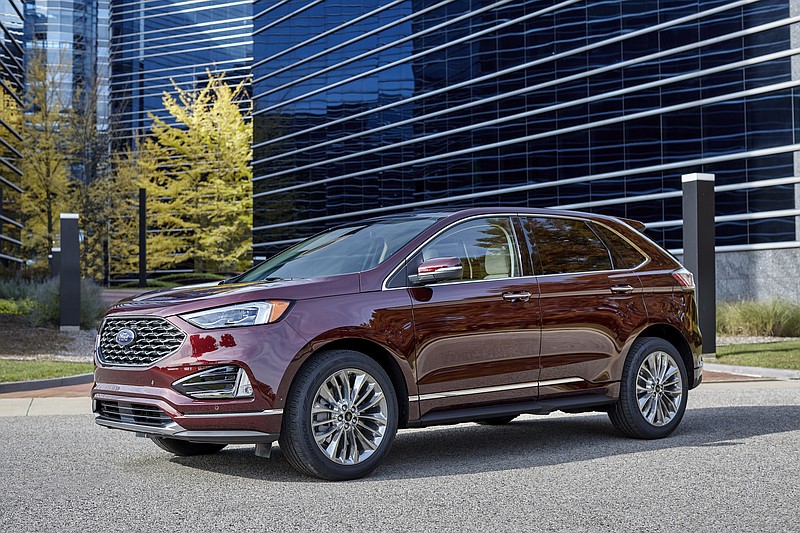 UPSHUR COUNTY, Texas – Two roads diverged, and I knew all too well which I would choose. I'd done it a hundred times.

So did the 2021 Ford Edge ST Line, which did not surprise me at all. In just a few days I had grown confident of this comfortable and competent machine. With five seats and selling in the $32,750 to $43,600 range, the Edge is a well-respected competitor in a class that includes the Subaru Outback, Nissan Murano, Toyota Venza, and Hyundai Santa Fe.

With longer wheelbases than compact SUVs, these vehicles tend to offer more pliant rides but are highly maneuverable. Above-average materials, high levels of standard technology, and attention to craftsmanship make these perfect for smaller families and empty nesters.

Introduced in 2015 and refreshed in 2019, the Edge has been in production long enough that Ford has worked out the kinks. Consumer Reports gives it high marks for reliability and most critics put it among the top three in class.

Alas, I had yet to master the intricacies of Android Auto in Sync, Ford's adept infotainment system. Somehow, both my phone's WAZE app and the car's Google Maps-based GPS, were directing my path home. It was sort of like dueling conductors. The former used a calming, yet alluring, British female voice, the latter that of a chipper American male.

As I drove home from an appointment in Longview, I found I could tolerate the redundancies, maybe slightly enjoy them. As I neared the Texas 155 cutoff from U.S. 259, however, I dialed up a favored playlist, which immediately landed on a favorite tune.

I marveled at the felicity of sound emerging from the car's standard 6-speaker system.

"In three-tenths of a mile, exit the highway on the right."

"Darn," I thought. "I love that first verse, especially the fiddle lead-in. I'll just hit the button and start over."

"In a quarter-mile, turn right."

Keep an eye on fuel economy

In that instant I knew two things: That I would tell this story, and that it was fundamentally unfair to the well-executed automobile I was driving on a brilliant autumn afternoon amid the rolling hills and sparkling lakes of East Texas.

It wasn't the car's fault that I had not taken the time to open the glove box and read the darn manual. In truth, there was precious little to criticize in the Edge. Oh, I found the left foot rest a bit high and strangely angled toward the driver, but I soon adjusted.

Nor was I crazy about the fuel economy, though it's slightly above average for class. The EPA puts the line at 21 city/29 highway/24 combined. I got about 21.5 mpg in combined driving, mainly because "highway" in Texas means 80 mph in the slow lane.

Highway fatalities are up? Imagine that.

In today's paradigm, 24 mpg is a nice number, but at our house don't buy anything that gets less than 30. My seven-passenger, mechanically perfect, 14-year-old Highlander Hybrid gets 31 mpg.

Right now, Blonde Bride and I are shopping plug-in hybrids, which average more than 100 mpg. The Ford Escape PHEV, starting at $35,505, is in the mix.

Gas prices are up? You don't say.

I also worry that by the time one pays off the note on a $45,000 machine, residual values might not be all that great. Electric vehicles really are coming faster than most of us think, even for the middle class, and the day will come when internal-combustion machines will only be found on buy-here, pay-here lots.

For example, the Edge and its luxury cousin, the Lincoln Nautilus, are headed for obsolescence in 2023. Ford says it needs their Oakville Assembly Plant in Canada to build yet unspecified battery-electric models.

Thus, the Edge is one of the few models on which Ford offers incentives, up to $4,650 cash back through Jan. 3, according to Consumer Reports. Glancing through Texas Ford dealer websites, we're not seeing those kinds of numbers.

Like my colleague David Boldt, I think that the Edge's high-swept and crisp lines, rich materials, and technology, give it a BMW X5 feel. The Edge may not have the cachet of its Bavarian competitor, but it costs a third less ($59,400 for a base X5) and is supported by a dealer network that is nine times greater (348 vs 3,004).

If looks matter, the Edge apparently has plenty.

"How do I buy one of those," squealed the lady outside my gym. "Mine is a 2019," she said, pointing to a black Edge a few feet away. "That one is just beautiful."

The only difference I could see was that our tester had the ST-Line décor ($43,760) that comes with a unique grille with body-colored bumpers, black beltline molding lower cladding, fog lamps and signature LED lighting. Black roof rack side rails, 20-inch gloss black aluminum wheels and unique badging add to a look that is positively Germanic.

David, who started road racing right after he was weaned, finds the base Edge's performance and handling to be fine for a family sedan, but nothing worth tossing about on a racetrack.

For about $43,760, buyers can have the full-on ST, featuring a specially tuned 2.7-liter twin-turbocharged EcoBoost® pumping out 335 horsepower and 380 lb.-ft. of torque using 93-octane fuel. It includes a quick-shifting 7-speed automatic transmission, standard all-wheel drive with selectable traction control, an available performance brake package, and ST-tuned sport suspension and steering.

It will blow off the Beemer, and probably last longer. It will certainly be cheaper to maintain.

The Edge comes with a long list of driver-assist gear and technology.

If you want dynamic cruise control and lane centering, in other words a vehicle that always maintains a safe distance and stays in its lane, features than can reduce serious accidents by two-thirds, Ford charges an extra $895. At the prices they're charging, do not buy a new car that does not have dynamic cruise control. That would be like buying one without seat belts.

On the other hand, Ford has some of the best UX (user experience) going. Handle-touch lock and unlock always work on the first try. A foot-activated rear latch works on the first swipe. The 12.3-inch SYNC screen makes it easy to adjust controls and navigate.

Unless, of course, you run two nav systems simultaneously.

I finally decided to laugh at myself. Discretion, after all, is the better part of digital warfare. I waited until I was clear of the intersection, slid back the panoramic moonroof, rolled down the windows, cranked up the volume, restarted the song, and headed off the beaten path into a perfect fall day.

"...I'll be lookin' for eight when they pull that gate, and I hope that judge ain't bliiiiind... 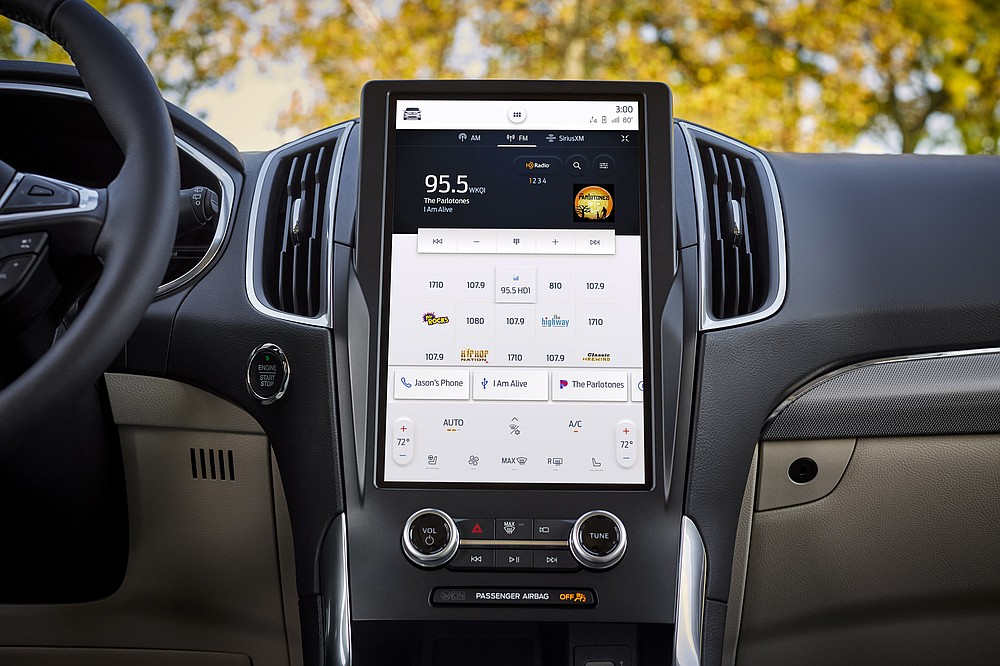 Print Headline: BILL OWNEY: In style and comfort, this Ford has the Edge