Boogaloo Boi who hunted police sentenced to 50 years in prison 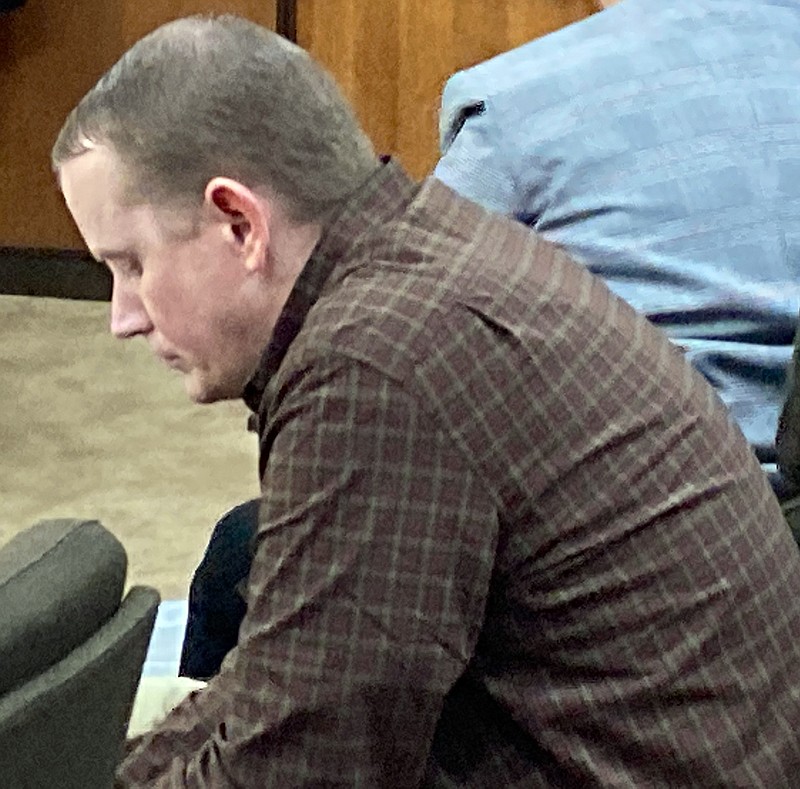 Aaron Caleb Swenson sits in the New Boston, Texas, courtroom where he was sentenced to 50 years in prison Friday, Sept. 17, 2021. Swenson, 38, posted countless threats and memes expressing his distaste for law enforcement in the months before he armed himself with two pistols, a 12-gauge shotgun, a katana sword and more than 150 rounds of ammunition the night of April 11, 2020. Swenson wore a Hawaiian shirt to symbolize his association with the Boogaloo movement and a green tactical vest as he drove the streets of Bowie County live-streaming on social media as he searched for a police officer to kill.

NEW BOSTON, Texas - An anti-government loyalist of the Boogaloo movement was sentenced to 50 years in prison Friday morning for the attempted murder of a police officer in Bowie County, Texas.

Aaron Caleb Swenson, 38, posted countless threats and memes expressing his distaste for law enforcement in the months before he armed himself with two pistols, a 12-gauge shotgun, a katana sword and more than 150 rounds of ammunition the night of April 11, 2020. Swenson wore a Hawaiian shirt to symbolize his association with the Boogaloo movement and a green tactical vest as he drove the streets of Bowie County live-streaming on social media as he searched for a police officer to kill.

The jury sentenced Swenson to 50 years for attempted murder, 20 years for terroristic threatening with the hate crime enhancement and 10 years for evading arrest. All of the terms will run concurrently because they occurred in a single criminal episode, First Assistant District Attorney Kelley Crisp said.

The jury assessed maximum fines on each of the three charges for a total of $30,000.

During the trial's punishment phase, Homeland Security Special Agent Gregory Harry testified that Swenson quit his job as a machinist after the killing March 12, 2020, during a police raid in Maryland, of a far-right militia member who has been described as a martyr for the Boogaloo movement.

Harry testified that Swenson planned to earn a living making parts including ones necessary to convert semi-automatic weapons to fully automatic capacity and suppressors which mute the sound of a projectile being fired. Schematics for a suppressor and parts matching the schematics were discovered in Swenson's home, Harry said.

Witnesses testified that Swenson instructed his wife to dispose of his computer and other items in his home before law enforcement executed a search. An email Swenson sent while in jail awaiting trial promised that he would start a revolution from prison.

On the night of April 11, 2020, Swenson's live-stream was brought to the attention of law enforcement by calls to 911. A recording played for the jury showed mostly a dark screen with Swenson talking of finding his "prey" as heavy metal music blared in the background.

As Swenson heads down Interstate 30 toward Arkansas, he catches sight of Texarkana, Texas, Police Department Officer Jonathan Price parked on the westbound access road and tells his audience he is turning around to get him. Price was listening to the feed, surmised that Swenson might be talking about him and drove away. Later in the night, Price would deploy a spike strip on Highway 82 in Hooks, Texas, which deflated one of Swenson's front tires.

Sgt. Jeremy Sutton testified that he had never been so scared of what a suspect might do. As every on-duty law enforcement officer in Bowie County closed in on Swenson using clues from the brief flashes of video showing the interior of his truck and landmarks along the highway, Texarkana, Arkansas, police stepped in to take unrelated emergency calls for Texarkana, Texas, police.

As Swenson drove he spoke of killing "tyrants" and "red coats," terms used in the Boogaloo movement to describe law enforcement. As he drives, Swenson continues his threats and shows his excitement by shouting, "whoohoo," repeatedly.

Harry testified Wednesday that Swenson's plan was to shoot a police officer and then decapitate him with a katana sword he'd made himself.

After Swenson stopped his pickup near 24th Street on Highway 82, officers evacuated residents from nearby homes. A total of 27 officers in more than 15 units surrounded but stood back from the truck. Swenson's loud heavy metal music continued to blare as officers used their cruisers to shine bright lights that made it impossible for Swenson to clearly see them.

"The evidence is overwhelming that he is a danger to our community," Carter argued Friday morning in closing arguments.

"We all have families. We all want to go home," Crisp said. "Separate him from the rest of us."

Bowie County District Attorney Jerry Rochelle thanked all involved in the arrest and prosecution of Swenson.

"Words cannot adequately express my gratitude to all the law enforcement personnel involved in this case," Rochelle said.

"I would also like to say thank you for a job well done to the jury who took time out of their daily lives to assist and ensure that justice was done and the community has been made safe from this threatening individual. It is never an easy task to sit on a criminal jury and this case was even more difficult because so many lives were put in harm's way."